Review: Spookies – your way through a haunted house 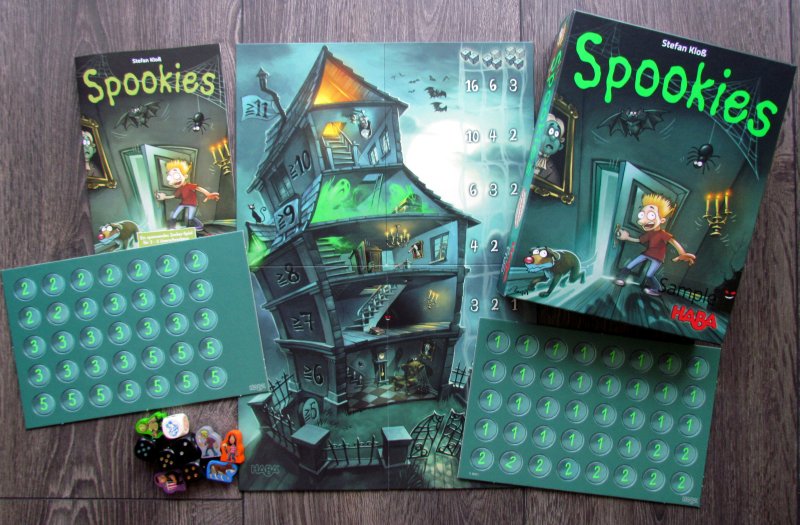 Friends gave me courage, when we all stood in front of half-opened door. We could see a dim light through a crack in door, as if something was shining inside. But there was no-one living there, we are sure about that. Finally, it was my talking dog Sandy, who finally persuaded me, and I grabbed the handle. Once again, I looked at encouraging glances of my friends and I stepped inside..

Tensions has carved board game Spookies and brought it to HABA children game company. This company launches its foray into world of family games – a new and unexplored territory. Its author is Stefan Kloß, who recently debuted with an excellent party game Beasty Bar. In addition, this new game was illustrated by Michael Menzel, a renown artist. This is a novelty for year 2015 and still hot box, which we got directly from their home office.

Spookies really means it and comes in middle-sized box. Dark green lid shows us tension, we have already hinted at the beginning of this article. Hero and a dog are already inside the house, looking kinda scared. Everywhere are spiders, cobwebs and other monsters. But contents of the box does not match in nor dust and neither amount of components. 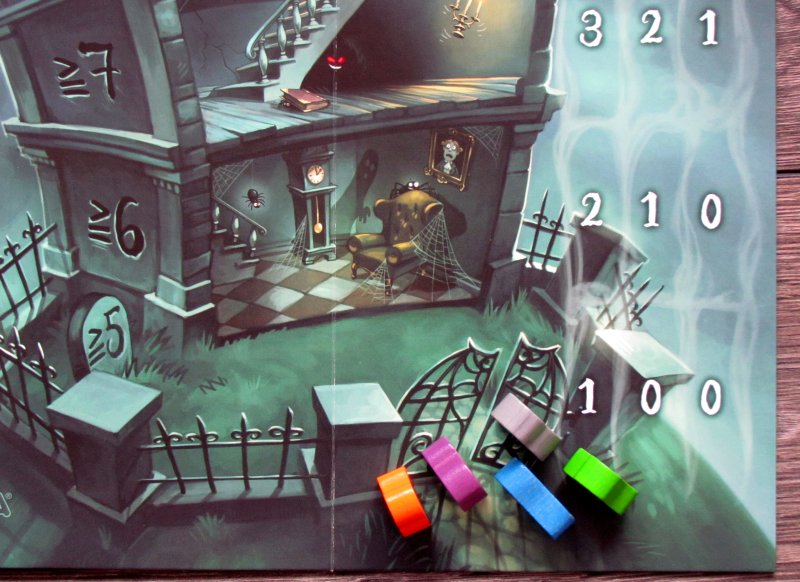 Main feature is folded game board, which is oriented as a portrait, showing a haunted house with five floors from the ground to the top. Each level has digit determining its level on the left and then there is also a scale to the right, which indicates point bonuses. Right at the bottom is already frightening garden and a space, where adventure for all five heroes will begin.

Their pieces are the next, what is waiting for us inside. Each character has his own color and sticker, so that differences between figures are clearly seen. Game also includes five dice, four of which are black with polka dots and last fifth is white with pictures of all available characters. At the end of the components list, we get scare tokens with numbers and point values.

At the beginning of the game, players do not choose pieces. All five are standing in front of the haunted house gate and players are simply watchers of their adventure. Tokens will create a pile next to the board and dice are given to the one, who was chosen as a starting player. 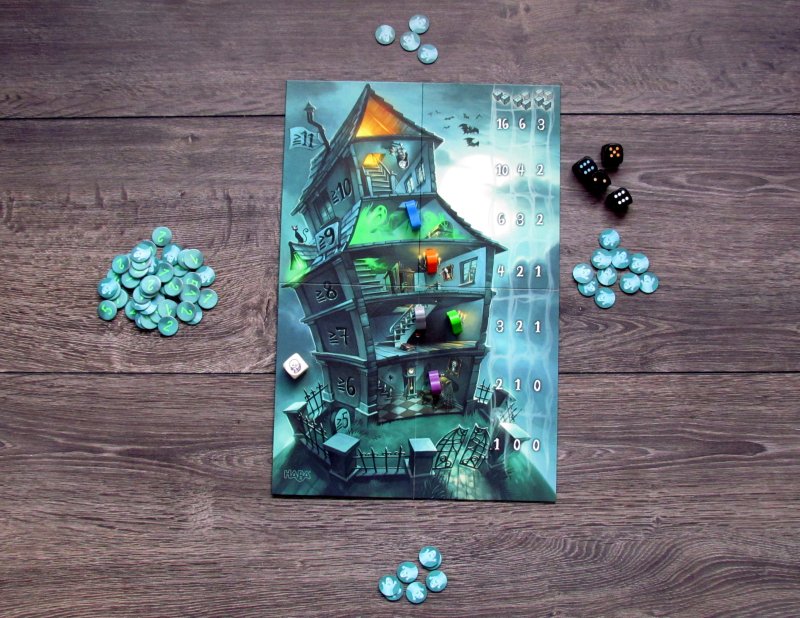 First up in turn is always roll with picture dice. That will determine a figure, which player will be able to move in his current turn and try to get him/her further with his exploration of inside of the house. Every shift is possible only by one space and only if the player does not take too many risks.

Once it is determined, which piece will be moved, player faces his first choice. He must decide, whether to roll two, three or four dice. His point gain depends on it (the fewer dice, the more points), but also whole success (the more blocks, the bigger chance). For each shift to next position, player needs to roll a certain sum on the dice and as character progresses, that number is increasing. It may be only five, but also need nine or even eleven dots out of twelve! And all this always with only two dice.

But whereas in the case of the biggest risk, players have nothing to choose from and must rely on the sum of two dice, using large quantities always gives them ability to choose those two with highest values. And only if the roll is successful, no mateer how many dice player chose to roll, can he move selected pawn one square forward. Immediately after it, he receives a reward in the form of scare tokens corresponding to difficulty of the roll. Their number is listed on the right side of the board and divided into rows (for each house floor) and three columns by number of used dice. 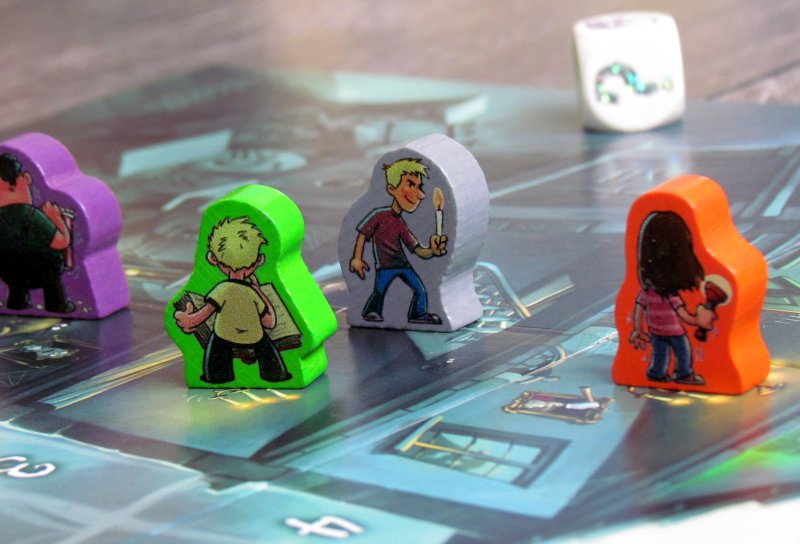 Success for players simultaneously means, that he can roll again. If he wants to continue, then obtained tokens are not his yet and go into his possession only after the whole turn. Even more of them can come, if he decides to continue and succeeds in his endeavors again. But one lower roll, than the required sum and there are some hassles in his way. First, that piece is moved back to place, whose condition sum of dots on dice affords.

Much more fundamental problem for player is an obligation to hand over this difference in form of points from their accumulated tokens. These points are not returned to the pot. Instead, they are left on the place, from which the piece fell down. Whoever arrives successfully first on this place with only two dice, he may, in addition to classic salary, take also these tokens.

So the game goes on, pieces climb and fall down again and players accumulate tokens for their successes. As soon as their number in the bank goes empty, end of the game occurs. Players count points on their tokesn and winner is the one, who has most of them. 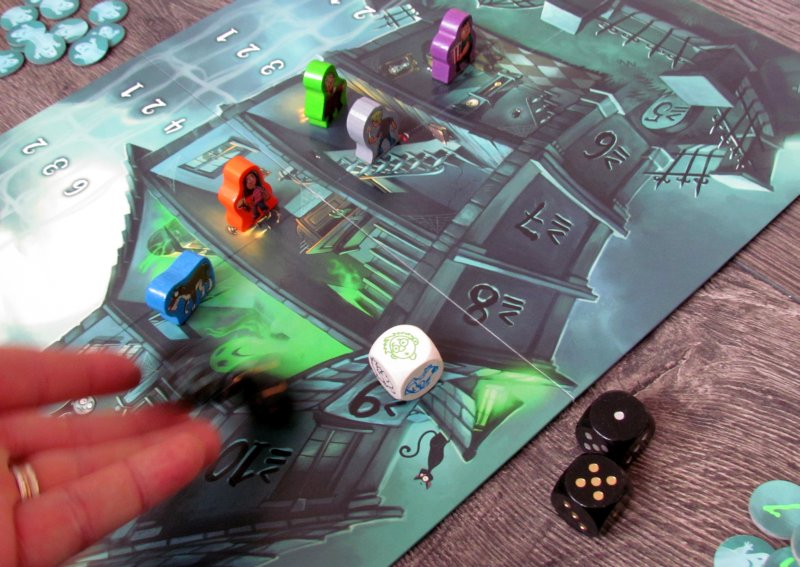 Spookies is game, that surpassed our expectations. Lid suggested, that we should worry. In the end, we was not afraid of any monsters or ghosts, but instead of bad luck and dice. But it does not exclude at all the fun you can get from this game, as you discover, when you begin playing Spookies.

At the heart of this is actually a push-your-luck element, that you try to resist. There are dice and tokens to receive, whenever you voluntarily quit your turn. But that’s not all. Author has added a sophisticated level of rolling difficulty. This means, that you can actually influence risks taken by yourself. Game then gets almost rid of the classic problem of these games, when unlucky player simply does not have any chance of success. A little bit of luck is needed, yes, but its not as luck-driven as most games of the same type.

Pawns keep coming back down, because someone overvalued his powers. And they still are ready to again and again wander up and bring some of those points for participants. It is clear, that if someone will stick to the wall and roll four dice each turn, he gets only a limited number of points, plus his chance of failure still exists. But almost certain points are better than none. But you should not expect any confidence in this game. 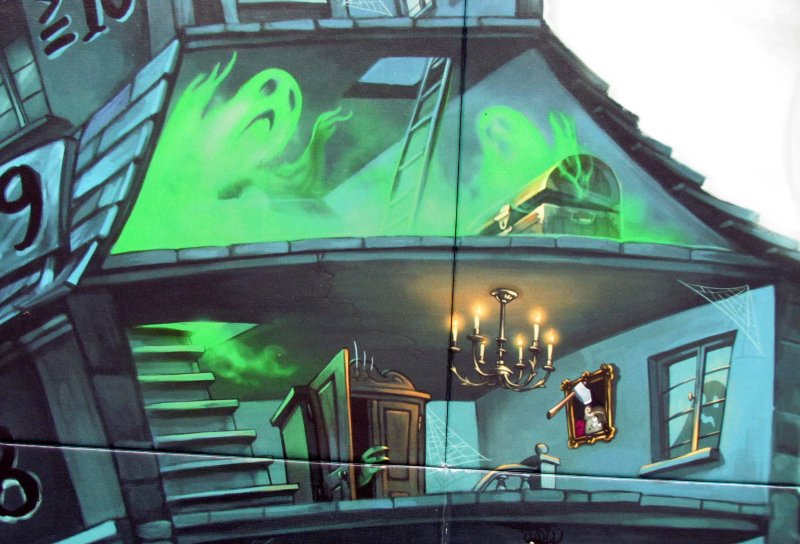 Yet, this tension along with choice combines so well, that you do not even mind, when you roll badly. There are other turns to remedy that and try again in the next round. And if someone is really up front, then you should begin taking more risks. And with that come completely different point gains. Therefore, if you are at least from time to time lucky, this game of risking is truly worthwhile.

Game is pleasantly fast. Its length can be easily adjusted by number of scoring tokens in the bank. But even with the standard setting, game ends in thirty minutes, which is nice. In addition, since there is no guile, you do not have to worry, that you get amuse playing in two. On the contrary, it’s the same fun as it is with more players.

Graphics of the game board is nicely detailed, dices are really big and wooden figurines have stickers. It is therefore not really much to comment on. Perhaps only the box could have been about half as large as the game would fit there completely as well and it did not consume so much space in your backpack. Families will definitely like to take this game with them. 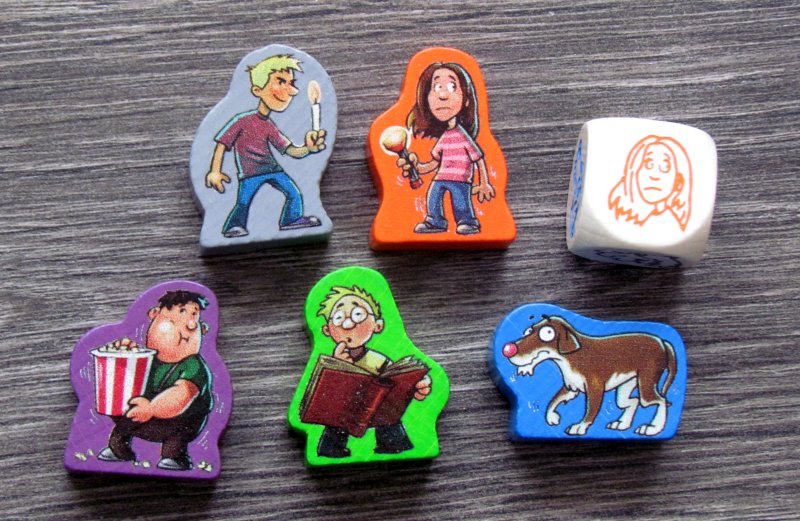 Spookies is a beautiful family game. We are pleased, that we can announce this and it confirms the fact, that HABA has a very good hand on games. This one is really fun and brings a lot of exciting moments, that dice can take care of. But this time, luck and victory are not as inseparable, because in a world of Spookies, you have to worry about choice in the first place. And if you do that well, then look out for the win.

Spookies is a game, in which one does not move their own piece. All figures are teamwork, and yet each player runs towards his own victory. Proper feasts is not everything and picking up by little pieces works as well. First, player must determine the level of risk by selecting dice amount to roll and based on this, he gest some chances and also adequate rewards. Game is not missing voltage and at the same time the game remains favorable and works without any glichtes also in lower numbers. Players actually do not have any chance to attack each other and yet, Spookies are great family endeavor.