10
new
Review: Dragon’s Breath The Hatching – with egg on top
Review: The Aquicorn Cove – saving the day.. and bay
Review: Fuji Koro – the storming mountain refuses to release its treasures
Review: Find the Code – search for treasure chest
Review: Black Orchestra – a secret operation in the past
Review: Dragon Keepers – children of fire
Preview: Chronicles of Crime The Millennium Series – chronicles of crime on a journey through time
Review: Cloaked Cats – Invitation to the Cat Ball
Review: Robin Hood and the Merry Men
Review: Miyabi – art in your garden

Review: Spyfall – watch out for the kiss! 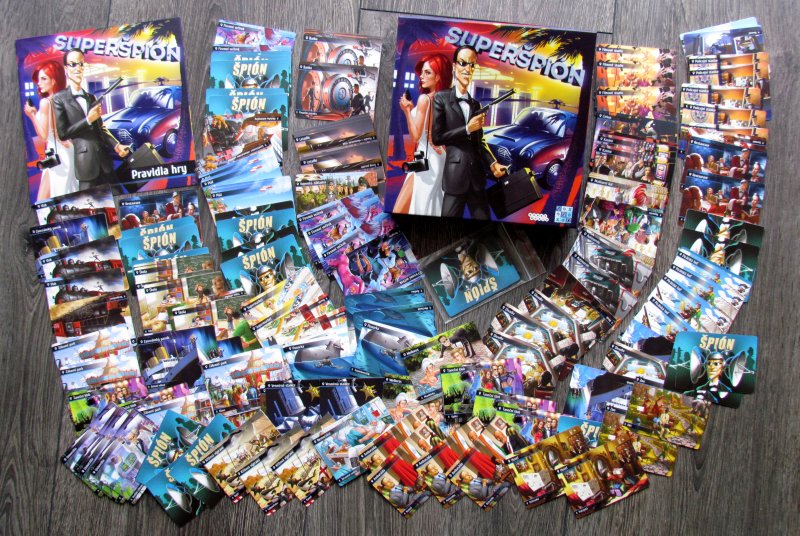 When I was recruited by the intelligence, they promised us a real training. But I would never imagined, that it could be so hard. We are all staying together in one cell and listen to every word everyone say. And we have to remember them to the last one and observe behavior of our rivals. Three weeks, we have not spoken with anyone from the outside, but task remains clear: find a spy among us!

New board game, which arrived also on our Czech market, is full of incredible agents. Its original name is Spyfall and it was prepared for us by author Alexander Ushan. Published for the world by Hobby World LLC as new game for 2015 with original illustrations by Uildrim and Sergey Dulin.

This is a card game, but the box is slightly larger, than you would expect. It is square-shaped, relatively low, with two agents owning a briefcase and a fast car on the lid. Actually, it could be such a recruitment flyer and as such would work perfectly on us, players. 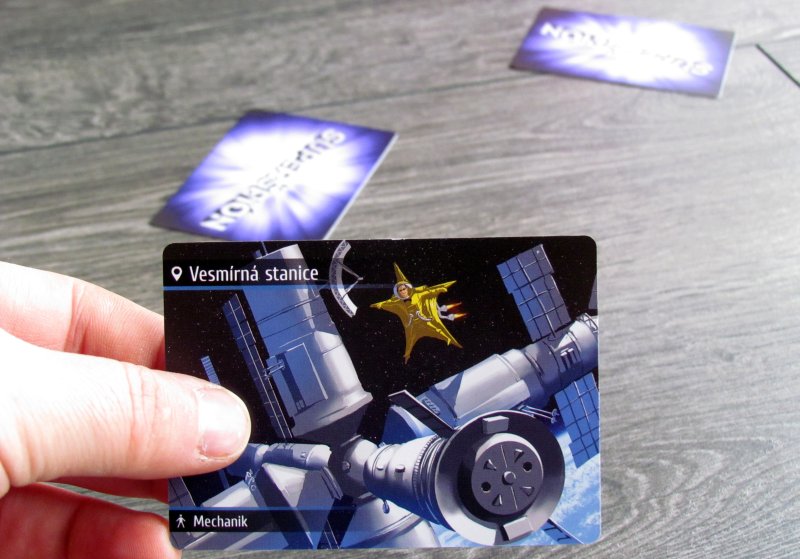 Whole game consists of 248 cards, that will bind together 31 different environments. All have the same back side, so that they can not be distinguished. Each location has eight cards, one of which is card marking a spy (they all look the same across environments). The game will always use only a few of these decks and their separation is crucial. Because of this, it is a good thing to see 31 bags to sort them.

Rules of the game clearly indicate, that for each game, participants will prepare environment decks face down. Each round starts with random selection of one such stack. If players followed instructions in the rulebook, then top card of each environment is a spy. Now, same number of cards as there is players needs to be counted and used. This means, that in addition to thematic roles of agents in disguise, there will always be one spy among the players. Selected cards should be unseen, shuffled and distributed between players, without them ever having chance to identify remaining pictures and even not knowing the overall environment of this set!

In each round, players can be divided into two groups according to their roles, but none of them will know, who is who. Most common are agents in the field, who got a tip and are seeking to uncover a dastardly spy. However, while agents know their role and environment printed on the card, spy among them has no choice, but to guess and try not to reveal himself. He does not know, where he is, because his card is environment independent. 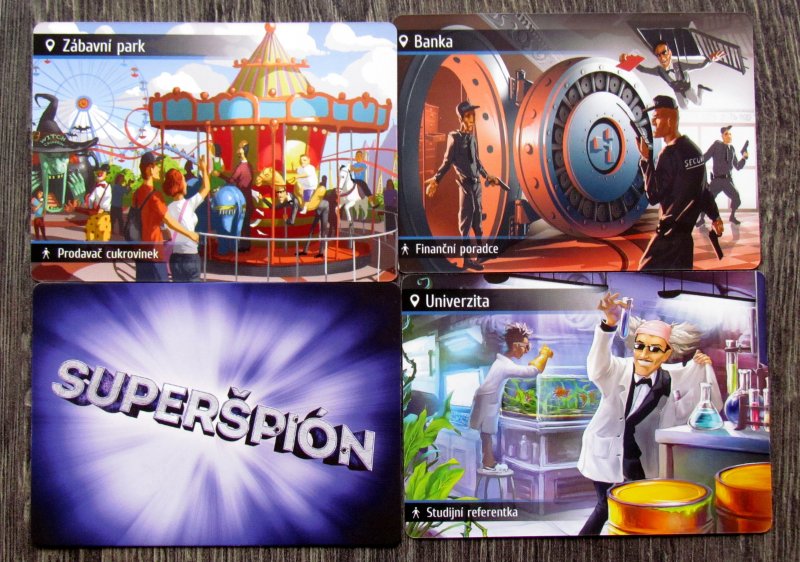 Each player in his turn may ask any opponent one question. It should be a question aimed to detect a spy. Players will attempt to take advantage of his ignorance about actual environment. But they must do it carefully, so they do not reveal to traitor, which one it truly is. If he is able to reveal identity of place all players are located in, he can try to guess it. And it he succeeds, he immediately wins the round, without giving others a chance to catch him.

Players will be gradually taking turns in laying inquisitive questions, trying to be inconspicuous, but also do not point suspicious glances of others towards himself. At any time during the round any player can stop the turn. If this is honest agent, he may try to mark a spy and others express agreement or disagreement with such accusations by doing a vote. Conversely, a spy can reveal himself, but he must also guess location (from list in the rules), in which the round is played.

Round may also be terminated by eight minute time limit expiration. And at that moment, agents get the common opportunity to vote on a spy’s identity. On the basis of his contribution to catching of the spy, players earn points. Team together scores one and whoever marked him first gets one point bonus. Traitor will get more points, if he succeeds in hiding, even bonuses for guessed environment or players accusing innocent. After number of rounds, winner is the one, who has accumulated highest number of points. 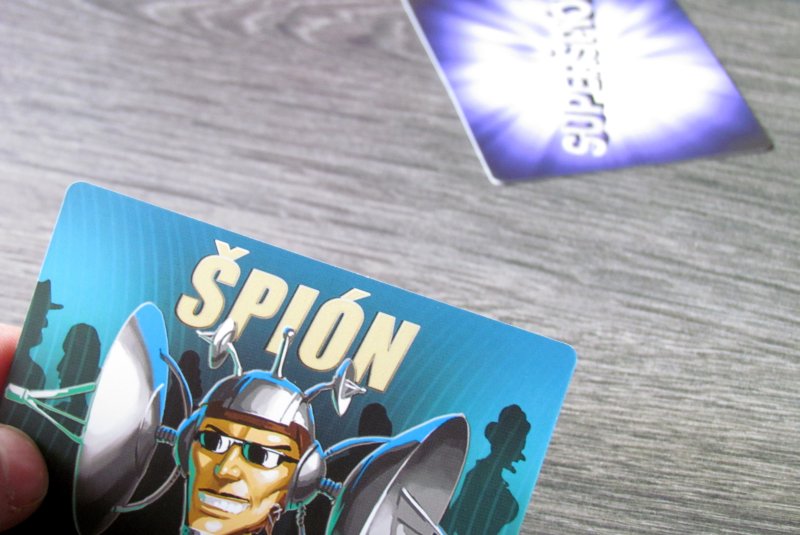 Spyfall is absolutely fascinating card game full of suspicion and accusations. Game offers a truly honest social development, when each round creates new groups of players, whose trust is overflowing back and forth. Each player can express their suspicions and every one must watch each other. No one except spy himself knows, who is telling the truth and who is lying. And also being spy is really fun, listening to all the conspiration talk!

That is reason, why the whole game is really exciting. Each round is completely different, but players will often see unexpected twists and turns. One player can get lucky and be a traitor twice or even three times in a row. This probability is naturally higher in the smaller number of participants and brings interesting situations.

It is not easy to uncover traitor in your ranks, but even worse is to divulge yourself, when answering nosy questions. They revolve around the environment, about which spy knows nothing at first. Thus, he needs to use some evasive answers at the beginning of the round and try to listen and get a sense of location based on other’s questions. Spy role is really difficult, but it is also significantly better evaluated.

Individual games are really fast. One round often takes only a few minutes, and if you set reasonable conditions for victory (well, three or five games are good), then you are looking at fifteen to thirty minutes of your time.

Game enchants with its incredible simplicity. Actually, everything is left in the hands of the players themselves, who take care of tension and heap of fun. Often a situation arises, in which participants will sag with laughter. The game can create a really good mood among whole group. All this is actually just about enjoying deduction, constantly conversing and seeking to obtain sufficient information for saying the verdict.

The biggest drawback of the game is playing it in lower numbers. Three or four players fail to create a truly dense atmosphere, as hovers over group of six or even eight participants. In doing so, game is absolutely unpretentious on space and it can be played anywhere from tent, train station over to the restaurant. But clash requires players to understand each other well and being able to concentrate, so this time alcohol is not entirely suitable companion. 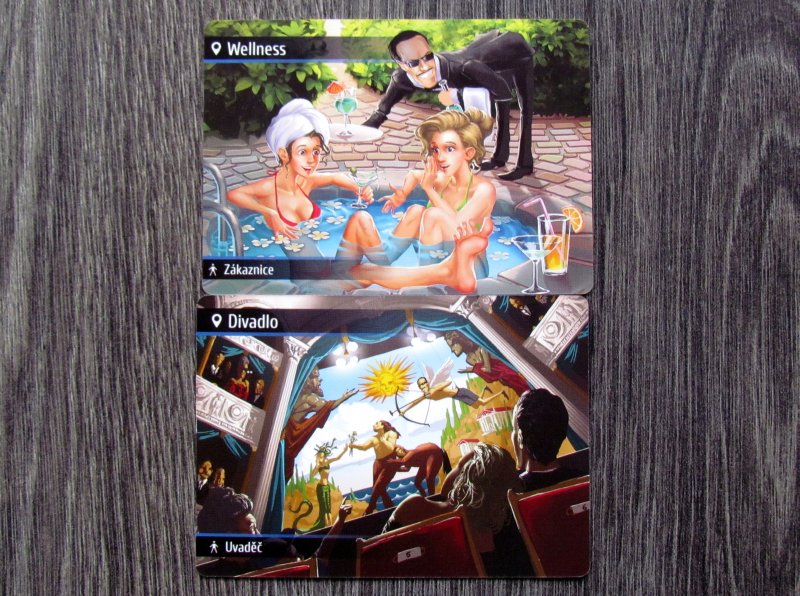 Thanks to element of bluffing and omnipresent humor Spyfall has easily become a hit on our test game evenings. Welcoming and ending matches were dedicated to this game, that has convinced us, that even party games can be refined. It remains, therefore, to terminate our today’s chat with a statement, that Spyfall is really cool and nothing less.

- weaker with three
- you need player, who can live their roles

Spyfall is ultimate party game for all. You've never played a board game, but you want great fun for a group of friends? Get this new game and you will not have lack of laughter and fun throughout the evening. Players themselves have to ask questions to reveal spy, who does not know some information, that is common to other players. But also this lurker has his chances of victory, when he reveals environment, in which round is happening. All participants should play their roles printed on cards and game will reward them with royally entertainment. Spyfall ranks among the very best party games, that are available in our market.