by Dušan on 07. 08. 2020
0
previous article
Review: Franky Rockin‘ Vegas – alive and gambling!
next article
Review. Game of HAM – humor to the bone
Contents 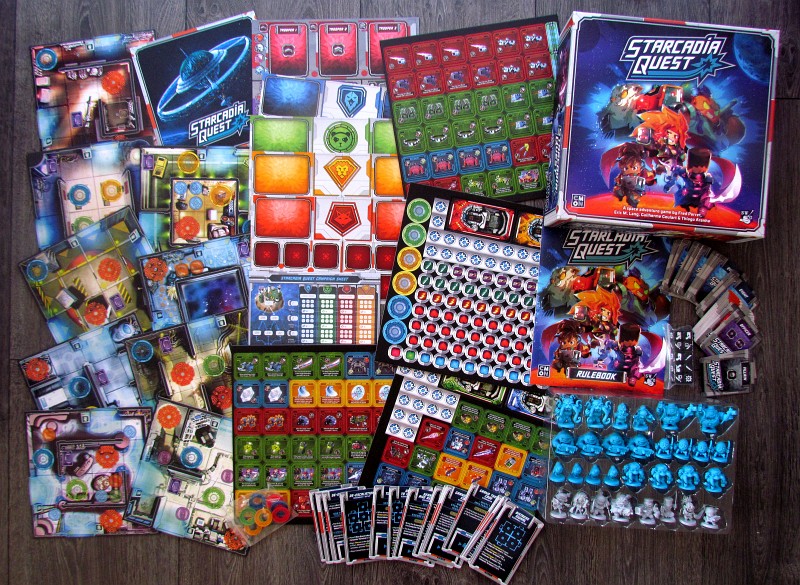 The universe has always been here. But that cannot be said of the inhabitants. Once upon a time, no ships were roaming across the vacuum, and the planets were completely lifeless. Everything belonged to everyone. But as intelligent life appeared and began to look at the stars, at the same time the desire to leave one’s own world appeared. All nations and beings have this desire encoded in their DNA. Looking up. And at first, that exploration itself was enough to make them happy. But with every step and planet encountered, it became clear, that sooner or later a leader would appear, who would turn back on his nation and lead a rebellion with a desire to rule it all.

And such a situation just occurred, when the game Starcadia Quest arrived on our tables. Behind the creation of this cosmic world, and the successor to the adventure game Arcadia Quest, is a large team of authors: Fred Perret, Eric M. Lang, Guilherme Goulart and Thiago Aranha. The game was given a unique jacket, which still follows the original series and its authors are Nicolas Fructus, Andrea Cofrancesco and Giovanna Guimaraes. The game was released thanks to a successful campaign on the Kickstarter server, backed by the publishing company CMON. And the last link of the journey in front of the players themselves remains the Esdevium Games as distributor of the game. 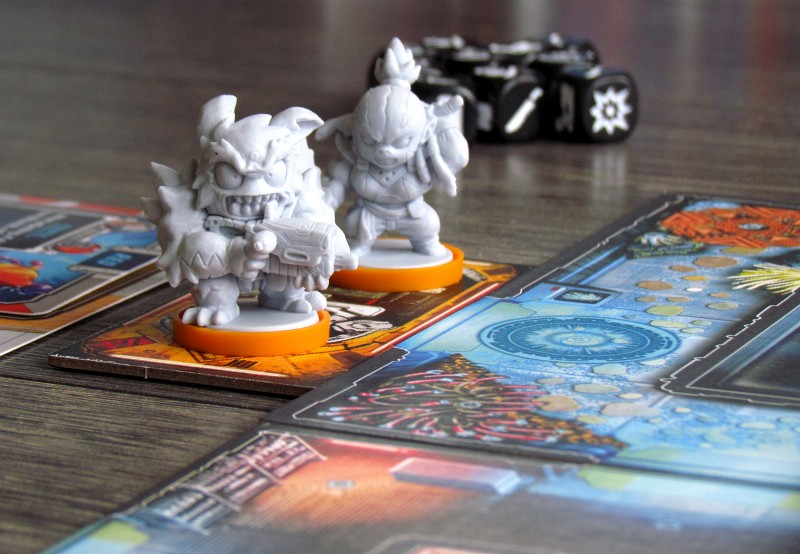 On the lid of the big box, you can see a group of heroes ready for their space adventure. Inside, of course, there must be miniatures of heroes and heroines and also their opponents. Each player gets two heroes under control, but first chooses a team. The choice is between a fox, eagle, panda or lion team. Then the individual players choose two characters from the menu, whose cards and figures they find and place in front of them. They immediately mark them with rings on pedestals, so that they are clearly identifiable as members of their team. At the same time, the player also receives a team card and one landing vessel. For these characters, players will also receive a set of seven upgrade boards, which they can freely divide and place on the team card.

The story of the game takes place across a campaign consisting of four adventures. At the beginning of each of them, they will find themselves on board different space station, but its not goal of the individual participants to work as team. Each scenario has its own setup instructions, which involves creating an environment with large boards (divided into smaller squares) and free colored squares on them are filled with tokens (equipment, doors, upgrades, and victory tokens). 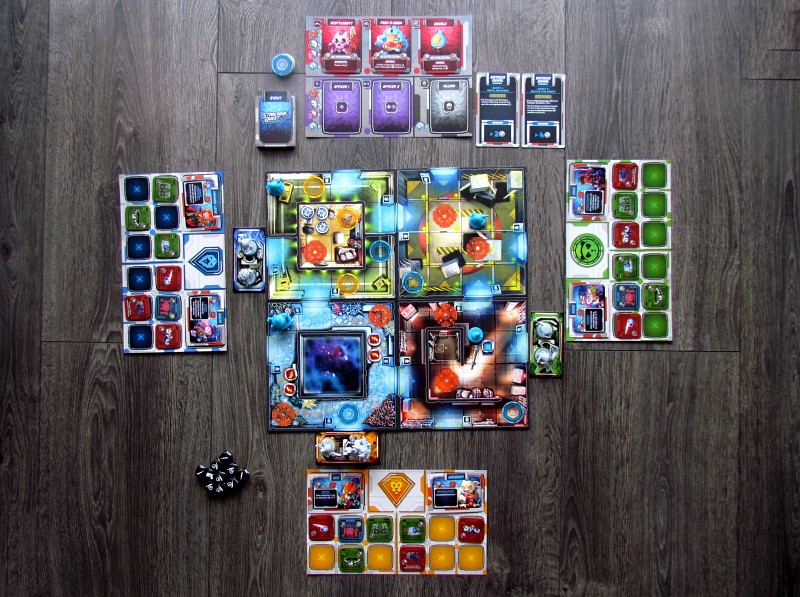 Players will add colored task tokens to different locations. All that remains is to prepare a supply of tokens and event cards, but above all to fill a large paper monster board with those cards, that are relevant for the given scenario and usually some random ones. There will also be a set of goal cards, both PvP and player versus the environment. As a final step in preparation, players dock their landing ship to one of the available positions on the plan. There are heroes on board waiting to get out and play.

They get into the action regularly as the participants take turns. He can not only relax with his hero, but above all activate him. Such a character can then move on the plan (each board has sixteen spaces), but he can also use portals or open and close doors (and thus also affect the line of sight). But only two figures can always stand in one place. 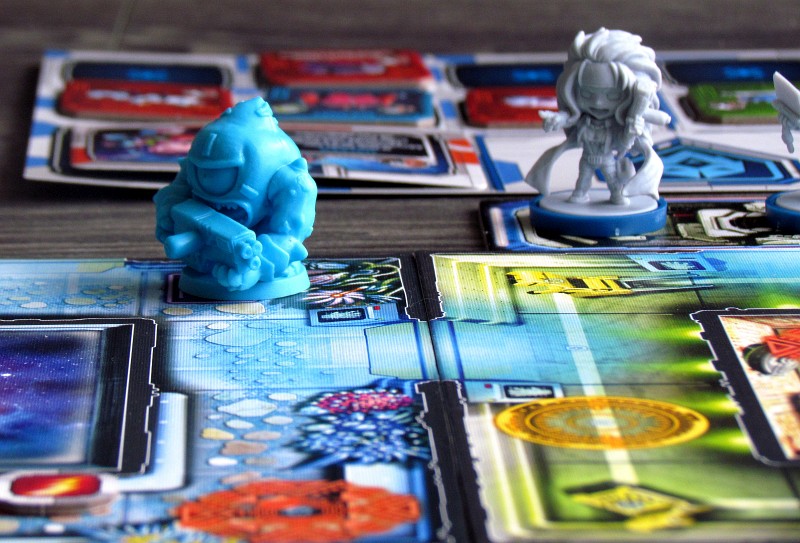 Before or after the move, the player can also attack with his chosen hero, not only enemies from the monster realm, but also fighters in the ranks of his opponents. Of course, the fight can take the form of a melee duel or it can be a ranged attack. Depending on the weapon used, the aggressor then rolls a set of dice and hopes to get a sufficient number of icons. The defender has a certain value of defense at his disposal to protect him from harm.

All without distinction, after a successful hit, the number of lives of the character decreases, and the hero, who loses the last one, is defeated. Defeat of monster will bring its vanquisher a victory token, and that goes also for defeating a hero from the enemy ranks. If, on the other hand, a monster kills a hero, all other clans will gain points. 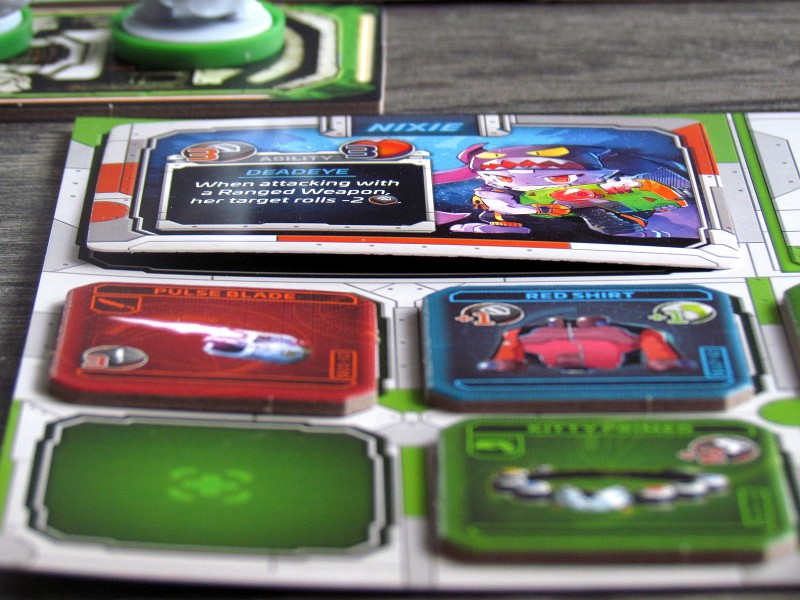 The second possibility of the move is rest. This will allow players to bring the killed hero from the grave, but also to recharge the used abilities (upgrade boards on the card), that are rotated to gray side after use.

But once all the players have made their turn, it is time for events, as the top card of this deck is revealed. It determines (with coordinates towards monster board), which monster will get a chance to retaliate. Monster miniatures don’t move, they just wait for the heroes’ mistakes. Still,,monsters can also react to a hero’s action, if they guard a place on the plan. After evaluating the upper part of the event (and a possible attack), there is still the effect of the card itself, which also needs to be performed.

Heroes earn victory points for their clan not only for defeated monsters, but also for completed tasks, that lie publicly on the table. Each has its own point value. However, the target value is not predetermined, because the game ends after a sufficient number of tasks have been completed. At that moment, all participants compare their accumulated values and the one who has the most points celebrates the victory and progress to the next phase of the campaign with significant success. 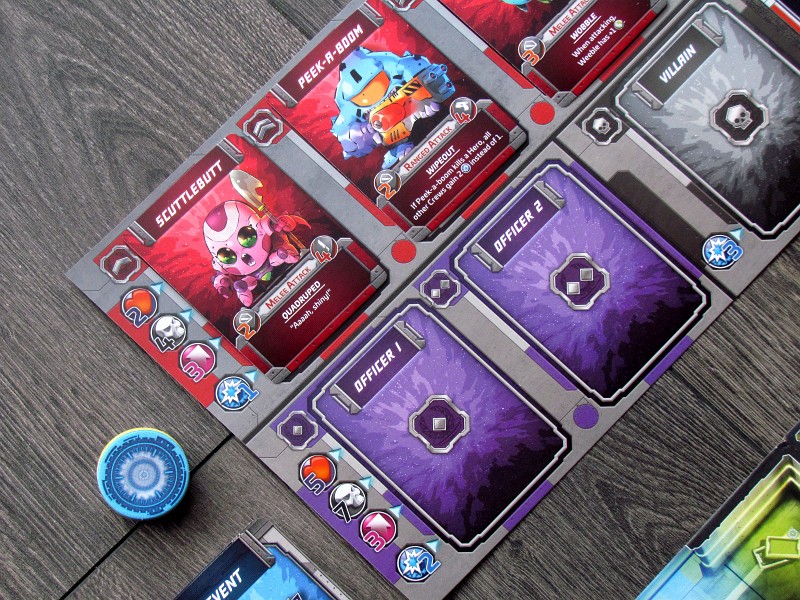 Starcadia Quest is a space adventure to be continued. However, the players do not cooperate at all, but instead their teams meet in an effort to fight the other parties for more points. In this way, they can not only perform tasks, that others would like, but above all they can attack each other and thus weaken their opposition.

Each of the participants has a team of two characters at his disposal, which gradually strengthens as the story progresses. Not only are there some upgrade boards on the plan, but it’s also possible to get some upgrades between battles. Unfortunately, this motivation is quite small in the campaign and players do not receive adequate rewards for passing through the story. 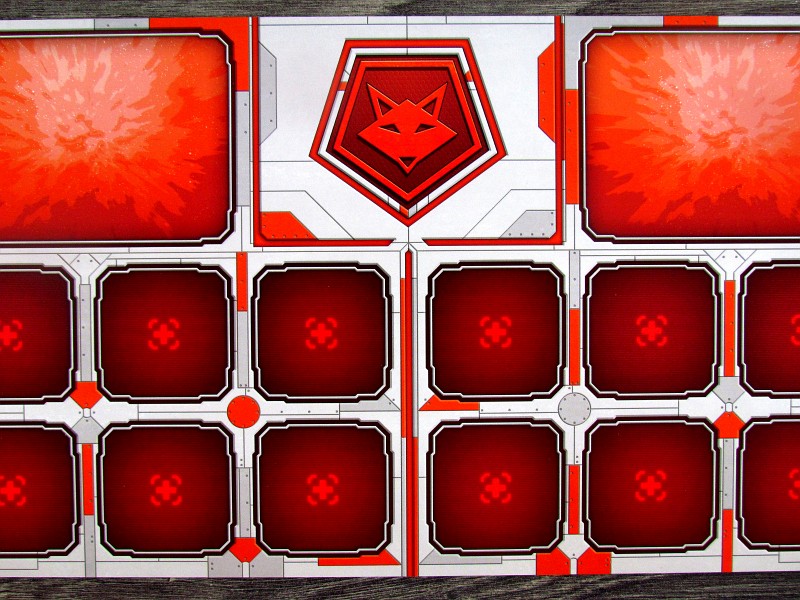 In addition, there is no story, that would combine everything into one emotional whole. That’s why it looks like the name campaign is here just because it has a tree shape and the authors can brag about it, providing different setup and instructions. But no real story. Randomly generated environments from all available tiles are really good. Then the preparation of the game is beautifully fast, and this is a great advantage over the campaign, where you place everything according to the pre-given instructions on the card.

Unfortunately, the number of participants has a significant effect on the overall experience, as the differences between the players in two are becoming increasingly apparent. The richer gets richer and the second in line doesn’t have much options to stop him. Therefore, for a good experience, it is necessary to invite three players as the absolute minimum, and ideally for a really intended game, then a full four participants and thus eight heroes on the map. The only way the game tries to limit this influence is to place ships at the beginning of the game, which goes against the order determined by the force (the result of the previous match). 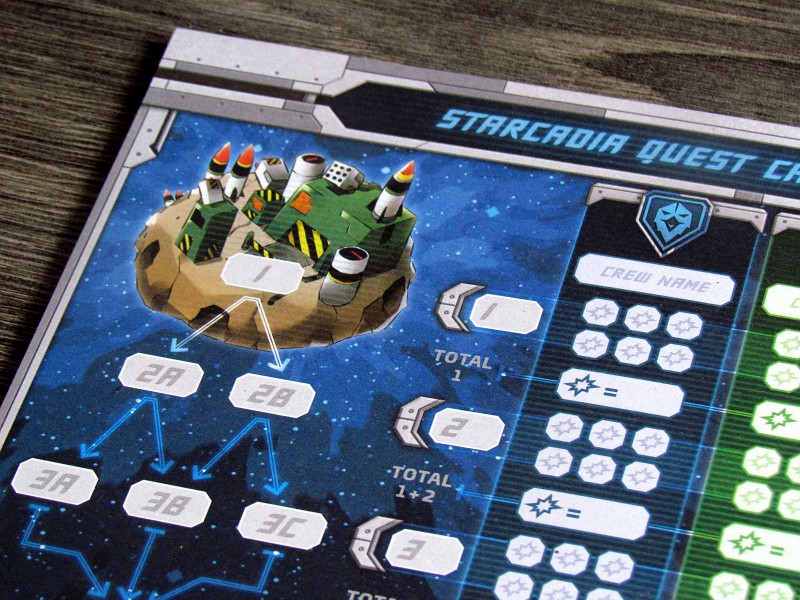 The game is of course wild and full of chance. The fight is driven by nothing, but the luck of the dice and the correct positioning of the characters. Something else happens, when the monsters get into action. Here, players can influence something, even if they are never sure which monster will be activated in a given round. But they must always move with the knowledge, that their steps determine, how prone they are to injury from enemies.

The campaign itself caught criticism from us a moment ago, yet its outstretched hand across several games is tempting for many players. Above all, it is an opportunity to improve your fighters and discover these upgrade tiles, which will attract you. But at the same time, it is also a commitment, that the participants will meet again. And with a game time that reaches one hour in one game, four games are quite easy to complete (even in one night). Nevertheless, compared to the original fantasy versions, the game is faster overall. 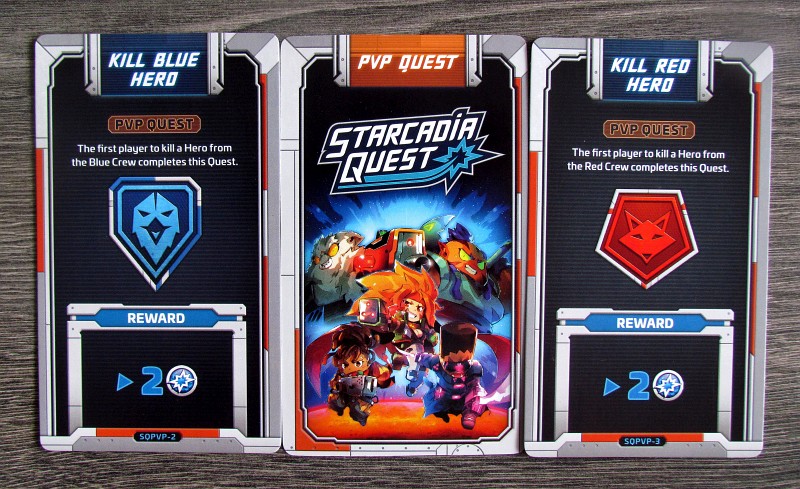 The game has been optimized against its original design in several ways. The change, of course, is the cards that accompany players across campaigns (instead of book). In addition, the stories themselves in several parts each have randomly distributed records, which has a positive effect on the replayability, but again does not give the authors so many options to firmly define some story elements.

The procesing is great, especially in terms of miniatures. It is clear that buyers of the basic box will not receive the same dose as those who supported the game on Kickstarter. But also Starcadia Quest is also a beautiful-looking game, which is a bit untrue with paper board for players and monsters. Given the number of miniatures, it would certainly be gratifying to upgrade the material for these elements instead of one of them. 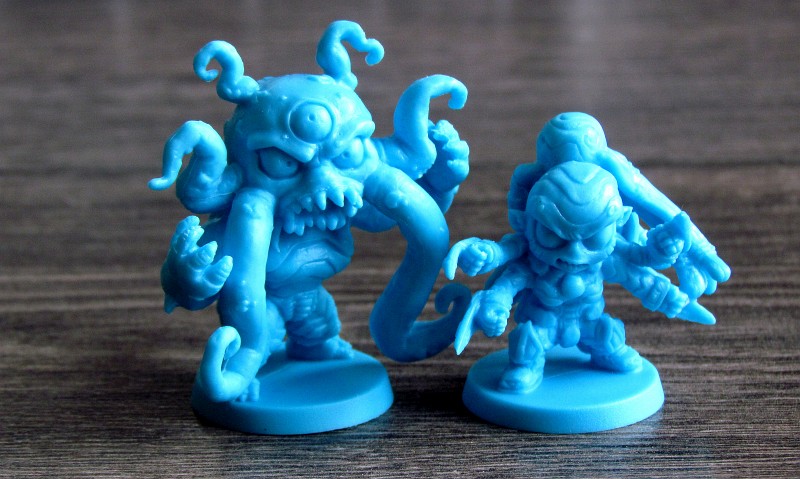 Starcadia Quest takes our favorite fantasy game, including all its quests, heroes and battles between players, and transforms it into a sci-fi world. Fortunately, it makes most changes for the better (with the exception of the story cards mentioned and the total absence of scenario connections), whether it’s just two heroes per player or a random plan. We enjoy Starcadia Quest, and if you love science fiction and rivalry (and you don’t mind a lot of dice rolling), then this is the game for you too.

Starcadia Quest is not perfect. It has a long way to go to become a true event. But it's still a very solid sci-fi game, which needs more participants and does not put such an emphasis on the campaign, but offers fast entertainment. This is of course about random setup, but new setting offers improvements and solid speed throughout. The environment is always random and various tasks are scattered for all participants to see. Starcadia Quest is a sci-fi adventure true to its name.