by Dušan on 04. 05. 2020
0
previous article
Review: Treasures of Cibola - a city of gold
next article
Review: Harry Potter A Year at Hogwarts - and preferably whole seven 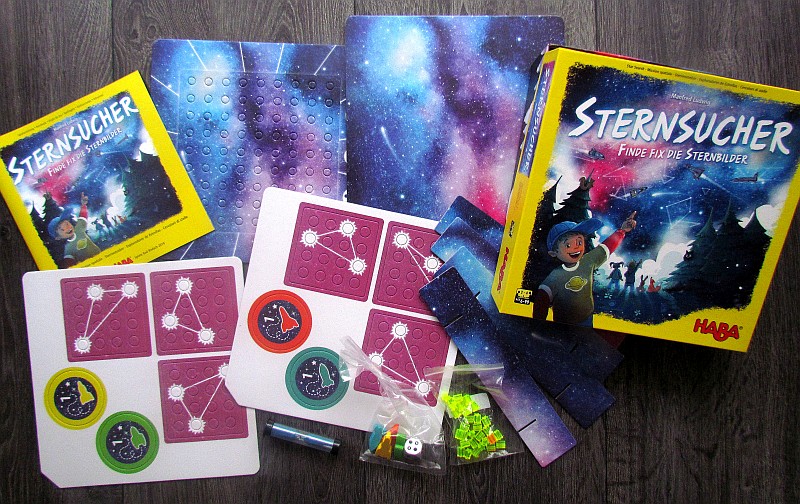 Most of us like to sit at the telescope at home and look at the sky. When we look into the viewfinder, it’s the closest, we can get to the stars. But not anymore. We found a secret spaceship, that we can use to get much closer to our objects and escaping lights of the common life. But there is no danger, when looking at the stars on Earth. You can’t get lost. But when you rise up, then all the stars suddenly look different and recognizing them is not easy.

A similar unpleasant surprise awaits players, who have lost their navigation system. Exactly such conditions were prepared for them by Manfred Ludwig, who created the game Sternsucher, translated in English as Star Search. Illustrated by Matthias Derenbach for the game, HABA publishes all the fun. 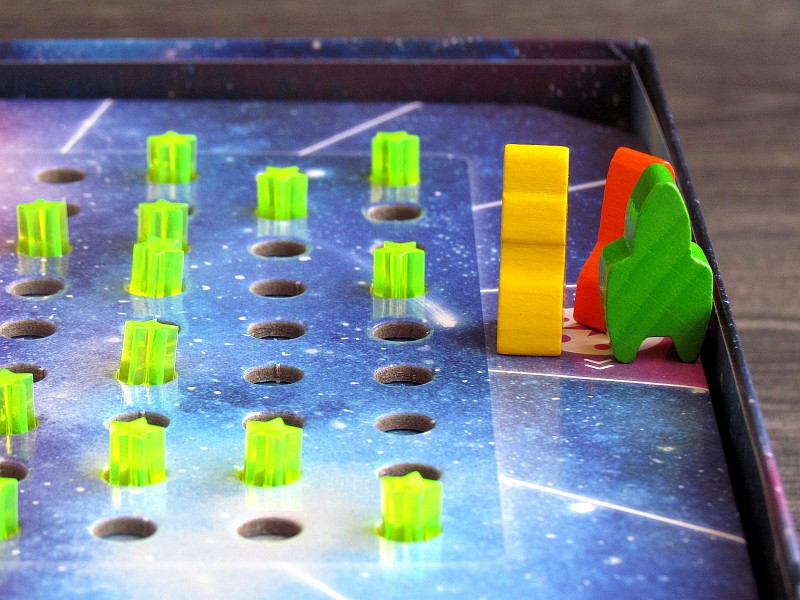 The box is largely yellow and the lid shows several children and animals watching the night sky. They can only dream of being in one of the spaceships, that are flying across the sky. And yet, their dream will soon come true through you. Under the lid, players will find a box, that they must prepare for the star search before the first game. They connect cardboard pads in the bottom and creates a square, on which can then be placed a pair of boards – first a solid board and on top of it a game board, that is dotted with eighty round holes. Right into these openings, players randomly insert small transparent pips representing the stars.

Individual players each choose one rocket and place it on the starting position of a track, that winds around all the stars. They then prepare a shuffled set of starry sky tiles, a die and an hourglass. And that’s it.

Most of the time, the player’s rocket figure will be on a square without a planet symbol. But if such a normal situation is true at the beginning of the turn, the player simply rolls the dice and the number of dots determines, how many positions can his ship fly. 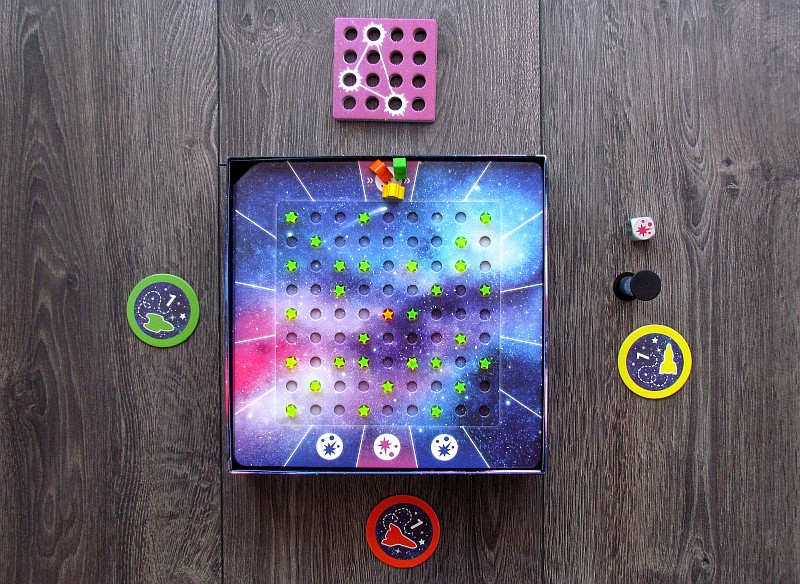 But he may also be lucky, because in addition to the polka dots, the planet’s icon may also be rolled (and this will happen more often, than landing on that space). And at such a moment will happen the same, as when a player starts his turn on the position with planet icon: his efforts will suddenly become more interesting. He sets out to search for constellations. He takes the top tile from the draw pile and turns it up the right color (depending on the planet’s color). His neighbor then turns the hourglass and starts measuring time. 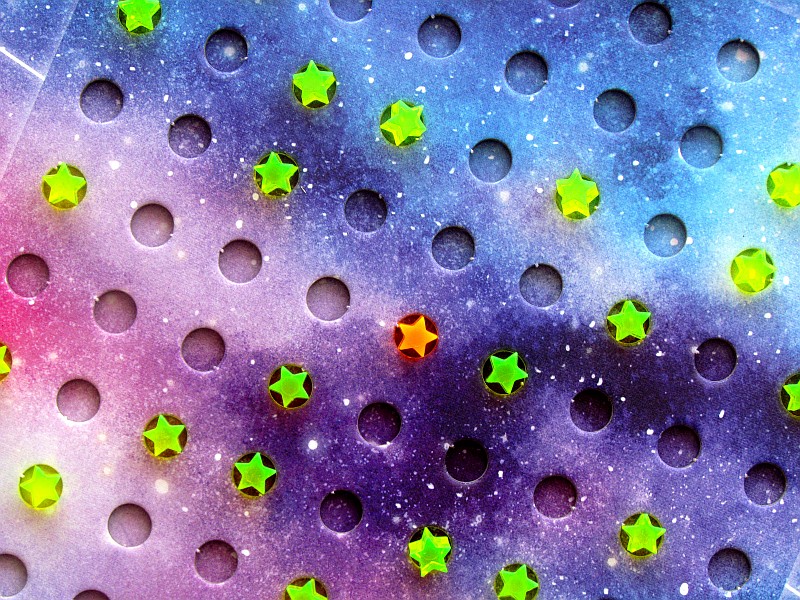 However, another rival now gets a chance to move the used stars to another position outside the tile and creating absolutely new and undiscovered constellation. All participants in this way alternate in the search for stars, until one of the ships manages to circle the entire round. Such a starfighter celebrates victory.

But the author was aware of this, so he introduced restrictions. If the ship is not the last of all, only full black dots count towards moving. This is, of course, a significant limitation, that will slow down ships, that are in the lead. 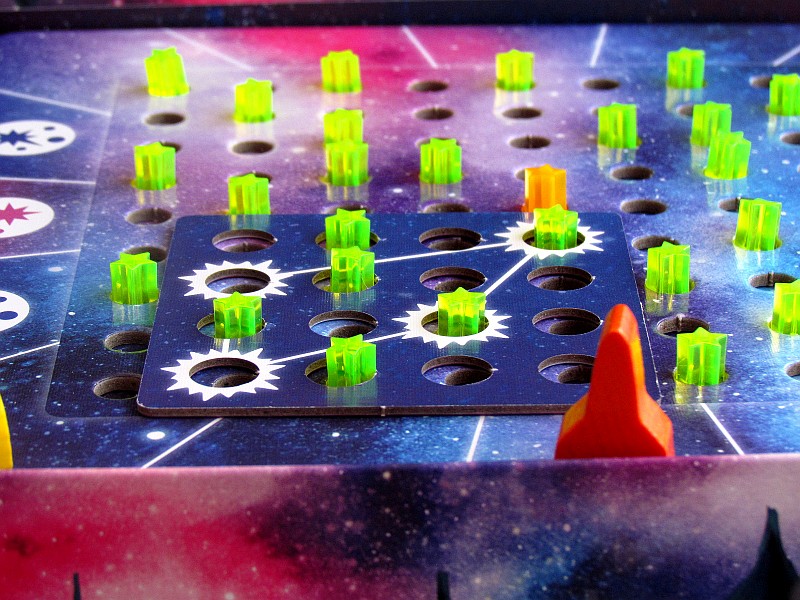 And coincidence plays a role especially, when the dice rolls. If a star symbol falls instead of polka dots, a handy player can gain an advantage. And if he rolls this side frequently, he has a significant advantage over others.

Finding constellations on the plan is interesting activity. There are always several holes and it is not easy to find the right place, that fits best. More importantly with sand running down the hourglass. Players can rotate the plate any way they want, while trying to incorporate the orange main star in it all.

It should be noted, that players can also choose difficulty. This is determined by the possible additional turning of the hourglass. For toughest challenge, the clock does not rotate at all, but you can also allow one or two turns to make it easier. So it is mainly about how old children compete for the constellation. Children around the age of five or six may participate in the game, who will appreciate more time to orientate. This difficulty will also be reflected in the game time, but even with the longer turns, yet still the game takes no more than twenty minutes to finish. 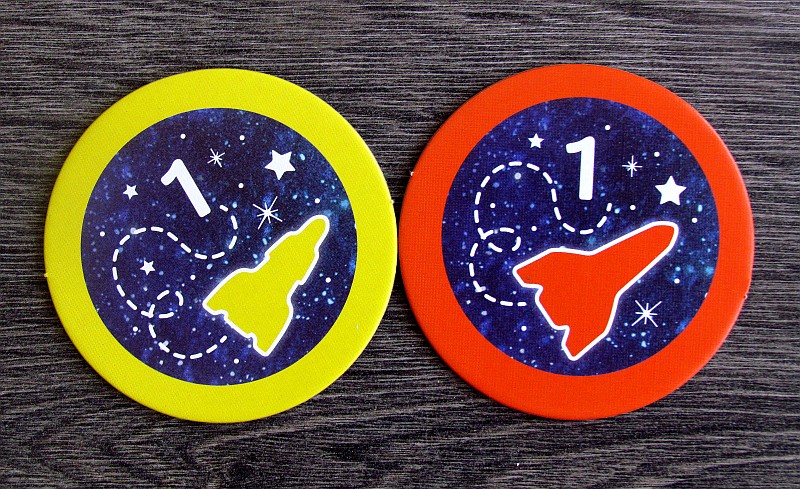 But the positions of the stars are not fixed. After each connection is made in the sky and tile is placed, some dots move around and this also changes the possibilities for all upcoming players. This is an excellent decision, because the plan is changing under the hands of children and they have to watch carefully.

The rules offer one more alternative, in which children look for stars at the same time. It is a bit more hectic and is therefore especially suitable for older ones. However, there will be a great deal of difference between the participants in their skills, so we still prefer the basic option.

The processing of the game is again great. The whole board and its openings for stars look great from first moment. Although the stars themselves do not shine, it can be easily arranged by placing some light in the bottom of the box. This makes the game even more attractive to children and can be played even in low light conditions.

Sternsucher is a game created for all small astronomers. Suddenly stepping into a rocket, they will circle in an attempt to identify constellations, that no one has ever seen before. This kid’s game just went well, although it is quite random. Sternsucher is great fun for kids who are interested in the stars.