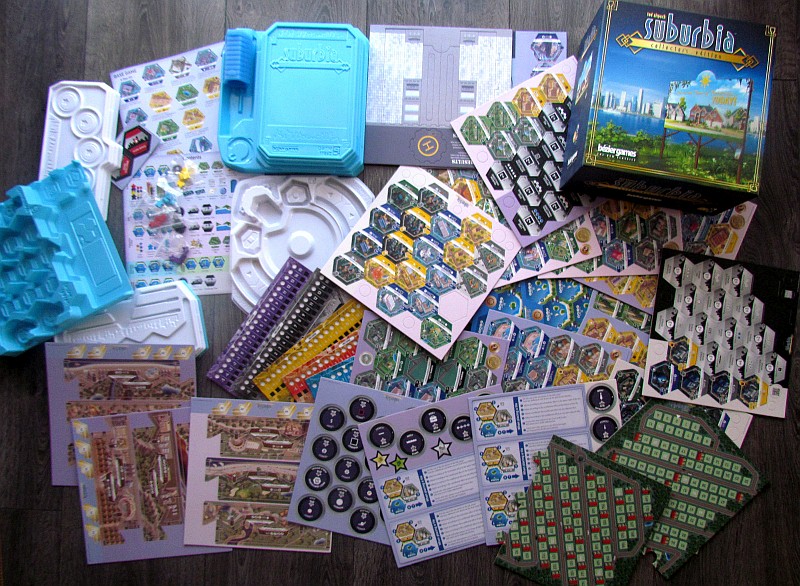 I tell myself, that this is how every city started. And it doesn’t matter, if today it has a hundred thousand, one million or ten million inhabitants. Once upon a time, it was just a few stacked houses, whose people knew even the last secrets of their neighbours. Only thanks to a huge amount of work, determination and goodwill of all of them did they become a true metropolis. With all the good and bad, that belongs to being one.

And players also dream of growing their village into a huge city, at least in the story of the game Suburbia, where they become builders of metropolises. The game was created in 2012 and, somewhat surprisingly, reappears on the market seven years later. This time, with the subtitle Collector’s Edition, with the same designer Ted Alspach. He prepared it for us under the banner of the publisher Bézier Games. The game travels around European cities thanks to Esdevium Games.

From the first look at the box, it is clear, that this will be a delicacy. The high box, which is more than twice the height of a classic game, is packed with contents from the top. And it won’t shrink in any way later, because the elegant Trayz plastic binders are used to store all the components. These will be used by players not only during storage, but also during the game itself. 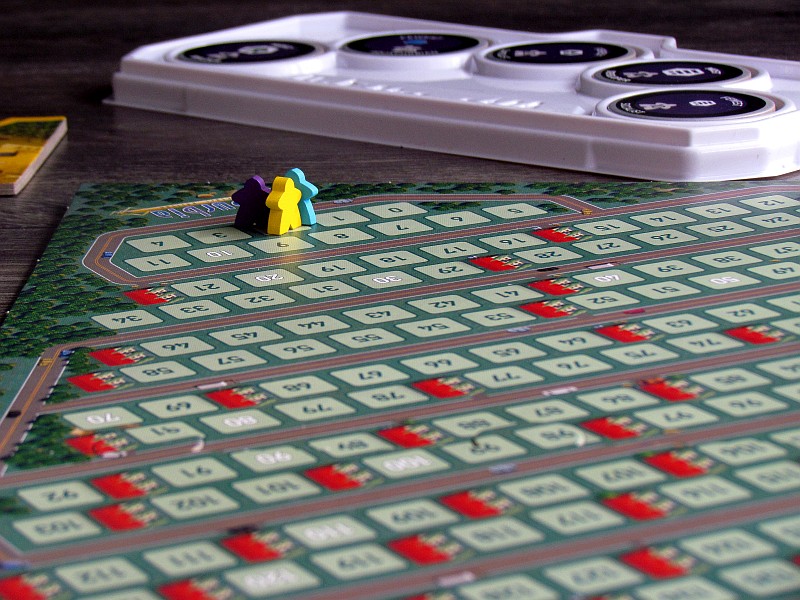 During the preparation, however, players mainly create three piles of hexagonal plates in the prescribed number (according to the number of participants) and put them together in one large tower. This building is placed, as well as the seven starting tiles revealed from the first stack, in the basic plastic stand of the market. Nearby players will prepare an offer of as many common goals as there are players, as well as a set of tile factories, parks and suburbs. The individual participants will now receive one copy of each of these and attach it to their neighborhood. Here, every player also marks the starting zero income and one reputation point. At the same time, the color of the board determines, which wooden figures the individual participants will receive. Everyone will also receive investment tokens, choose one of their secret targets and, above all, mark his starting population on a common board of residents.

In their turn, players buy tiles on the market for the stated amount, which consists of two parts – based on the position of the tile in the menu (building elements are gradually cheaper), but also the cost directly printed on the piece. Instead, you can buy cheaper ordinary buildings or buy a tile from the market, but use it as a lake. In all cases, the player attaches the new tile, so that it is adjacent to some of his already built buildings. However, the individual pieces have effects, that are starting to take effect at that moment, and by doing so, players can gain a reputation, income or other benefits, for example, from adjacent squares. 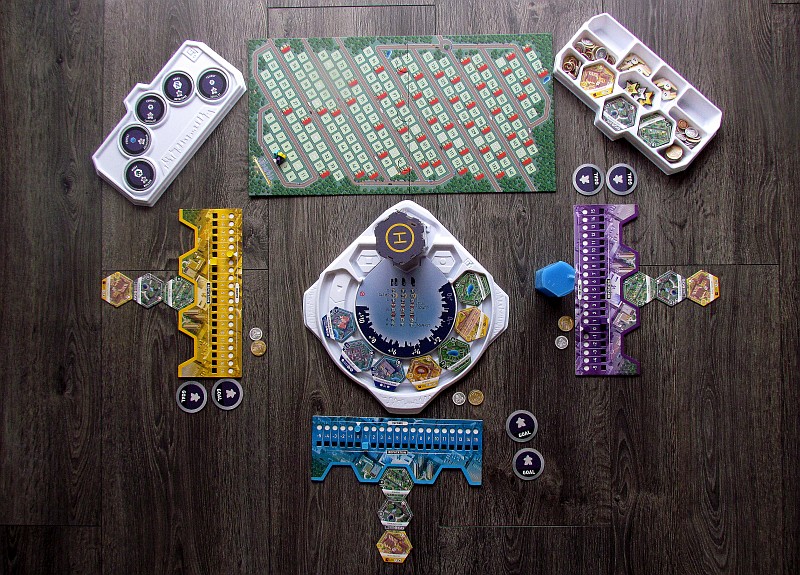 Instead, players may choose not to buy a new location, but to invest in their existing infrastructure. This means, that they will pay the price of the piece again and for that, they are allowed to place one of their investment tokens on it. Then they will be rewarded in the form of doubling the effect of the piece, on which the investment lies.

However, they can always choose only one of these four described actions. The rest of the move is just about adjusting the status of a player, who gets money based on their current income, population changes according to current reputation (people move or relocate) and replenish the supply of tiles in the market. That ends the round and it is the turn of another opponent.

So players gradually go through the offer of tiles. During setup of the last (C) pile, they shuffled the piece One More Round among those buildings, and after its revealed, it marks that the game is coming to an end. Once the next round has taken place, players will be rewarded for their goals, exchange their funds for the population, and the one with the largest population becomes the winner. 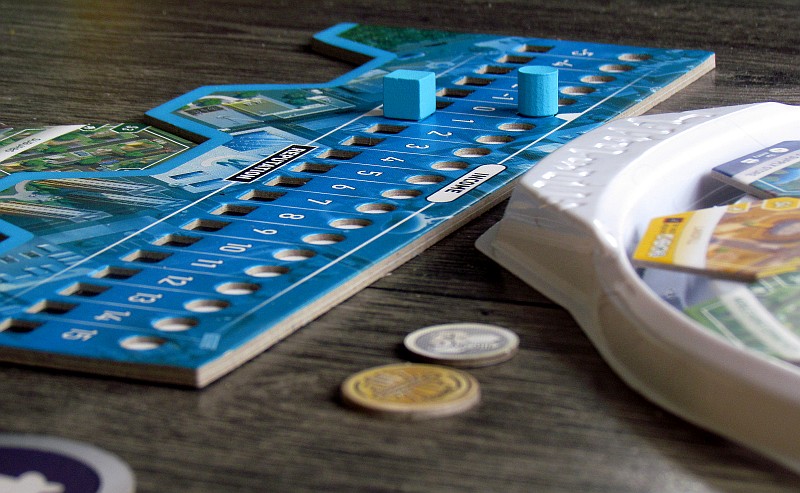 Suburbia is a game about attracting as many people as possible to the streets of your city and keeping them interested. It is therefore necessary to properly distribute individual locations, use their effects and find the right synergy between them. Each player builds their own city. And yet there is a sufficient share of interaction in the game, which does not consist only in the fight for pieces in the common offer.

The topic is really elaborated here and sometimes you feel like you are sitting at a building simulator. Completing the city makes sense and uses only two simple elements – finance and reputation. That’s enough to make you feel great about a well-functioning city. 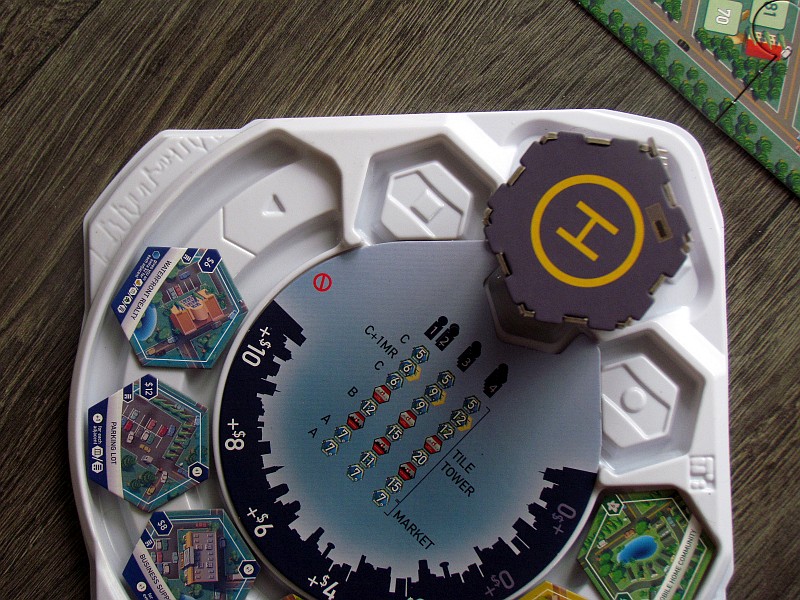 But the basis of success is not just the correct connection of the piece. You must always keep in mind your own secret goals, but also the common ones. It is through them that you can finally win or fall into deep hole of history with a metropolis, that will soon be forgotten.

There is a base game, and then there are expansions included. The box contains everything that has ever been published for this game and delivers it to your table in a single (and huge) bulk. They gradually change everything in the game, from the way of determining the starting player, through the involvement of nightlife. A huge amount of detail means that you will discover the pieces and their connections for a long time to come. We feel that after more than ten games we haven’t even had enough time to taste half of it yet. 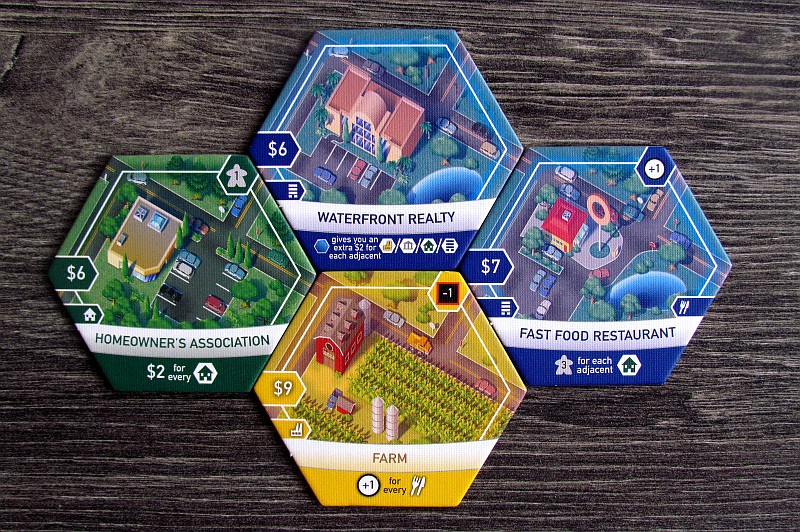 The game has wonderfully simple basic rules, on which the properties of individual buildings are packed, but you do not need to know them in the beginning. It is possible to browse them as they come on the market, because they are always public. And that is why it is possible to play it with less experienced players, but even the most demanding will find a lot of opportunities to roll over opponents.

The game is fantastic, especially with a lower number of participants, where the whole battle can fit in one hour. At four, it requires players to make more and constant changes to your plans, and above all, the game stretches more significantly (up to twice the time). We enjoyed it the most in two. The only dot of beauty is the packing of the whole bumblebee back into the box, which can stretch especially if you have shuffled some extensions between the pieces and now you need to separate them again. 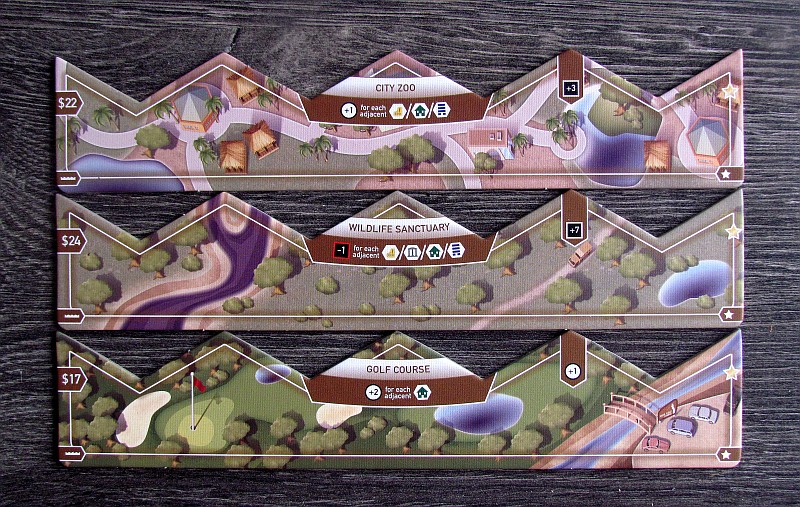 The graphics of the whole game are great. The individual parts of the city are elegantly connected and at the same time remain clear thanks to the color differentiation. All iconography is in place and you will have no problems with orientation. In addition, you will have all those pieces perfectly organized thanks to the flood of plastic binders. These are a bonus to help you prepare, but will slow down the pack a bit.

Suburbia is the ultimate city building simulator and is definitely the best game of this genre we have ever tried. This is a great classic and we are all the more surprised, that it has found it way to our tables only now. We could enjoy it all the more now in the complete edition, which is really maximalist. Suburbia: Collector’s Edition is a luxurious building paradise that will awaken the right mayor in you!

Suburbia: Collector’s Edition is a joy to play. The city is a living organism, and this is exactly what Ted Alspach proves to you in his precise design of its building. The game is great from start to finish, but there is also plenty of room for mistakes and rivalries. Above all, before your eyes, a real city grows with all its beauties and problems. You would like to try some SimCity equivalent on your table? Now you found it. Suburbia: Collector’s Edition is a box that belongs in the hands of every builder!

by Dušan on 02. 01. 2019
It’s time to build a castle. But this task comes with a number of unwritten rules. It is not enough just to put together kitchen, large common area, [...]
Comments
Leave a reply