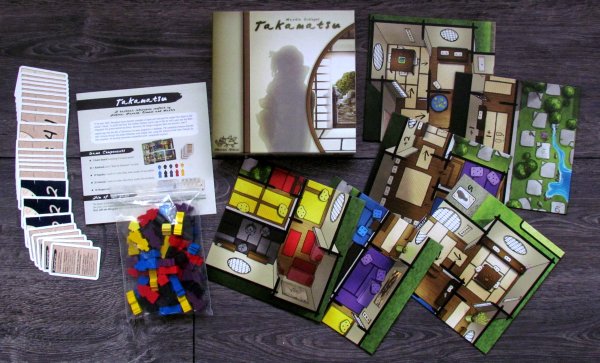 At first, I thought it was a joke. I thought it was just a way for Shogun to show us, that we do not reach even up to his ankles. But the smile from my face gradually disappeared, as well as from faces of other candidates. Every single one of us is now running around the palace and try to outsmart everyone else. Only one, who can tactically plan, has a chance to become Han of Takamatsu.

And you will be put up to similar test by creation of author Martin Schlegel (Aqua Romana, Atacama), who called it Takamatsu . The whole creation of his meditation and contemplation was published under auspices of Mücke Spiele in 2014. And we got this hot game to the office and now you can read about it.

In a small square box of usual size (and similarly low) with quite another color (dominated by white) hides the entire palace. This corresponds to six square tiles, that (when assembled) create two lanes passing next to each other around the whole building. Along with them is also a pile of eighteen point cards in the box differentiated by back side to two species – secret and public. And then at the bottom, there is a large bag full of wooden parts – samurai figurines and pagodas, always belonging to color of players. 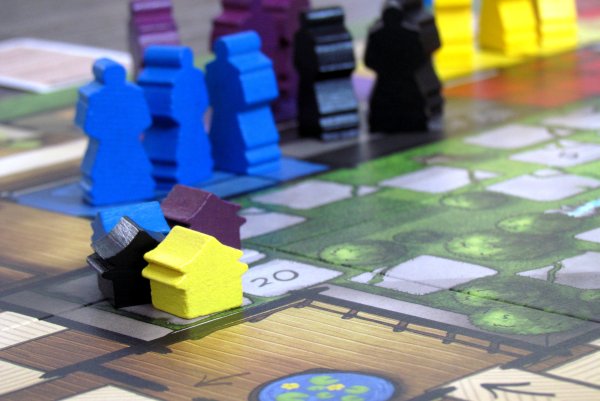 To start the game, players will be selecting colors and take samurai figures (according to the number of participants in the game). One pagoda will be left in front of them to mark his color, while second is positioned on the points counter formed by walkway amid greenery, fortified by four walls. All pieces of samurai are then placed withing rooms, that correspond to their color. Three must go to space on outer ring and remaining two start their rounds inside. From shuffled deck, offer is made next to the board (five pieces), with some cards revealed and others not (based on their type).

Then it is right time to fight for power. Player has only one duty in his turn – to choose a room, that is holding at least one of his samurai and move any pieces (as his choice) from that room together as a group forwards. Now the number of characters, that is moved, simultaneously indicates distance player can travel with them. Aim is for players to target their own spaces and end up there with their own figures, that is on field of the same color.

But as it happens, that’s not all. When players are moving, they should (if possible) always move samurai group, wherein each player must always take at least one opponent figure with him, if there is such a samurai found there. No player can under any circumstances empty room, which contains more than two characters. But otherwise, players have (in terms of moved number) completely free choice. 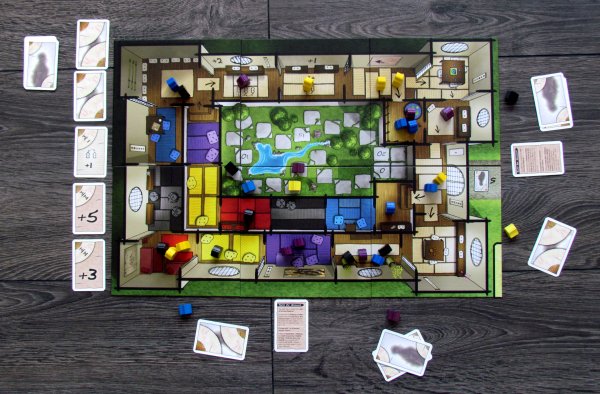 At a time, when some samurai (and it may not even be figure of active player) stops in room of the same color, his controller is instantly gaining top card in column created next to the board in the beginning. If players managed to visit the place with more figures, he obtains more cards. Menu is then always moved up and supplemented with new card from the deck. Player moves his pagoda based on their value to mark gained victory points. Some cards can also have negative on them and players will be actively avoiding getting it. But even so, game continues until the moment, when one of the parties has collected twenty points.

Takamatsu is a puzzle game of scheduled movement. This mechanism is certainly not unique and it is a very popular principle, which is based on the classic African game Mancala. In fact, it is also in this case a very abstract rivalry, because theme and board serve decoration only and do not affect gameplay.

And although our eyes are seing very successful and detailed illustrations, game itself has unpleasant ailments. First is the lack of control over scoring. Others have control over your bodies more often, than yourself and you are slave of their will. Only chance, that your opponents overlook, remains available for your upcoming turn. 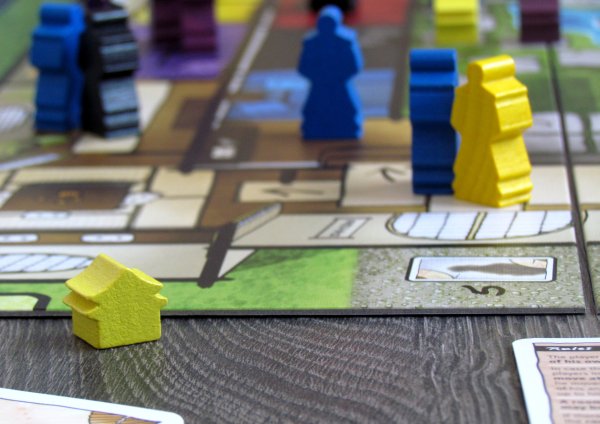 Yet the movement and monitoring rules is entertaining. Thus, only up to the moment, when you have to wait for your turn uncomfortably long. Individual rounds are very susceptible to syndrome of analysis-paralysis. Obviously only thinking can lead to victory, so you can hardly accuse someone of long thinking, but it certainly is a problem.

Variant for two players relies on fact, that each player will play for two colors. It obviously works without major problems, but it is more difficult to govern. Higher numbers are certainly better, but not in the game with maximum of five players. This is moment, when game becomes really slow and promised 30 minutes just come to grips. Moreover, it is already completely lacking control over the outcome.

Processing of the game is at least a little saving the whole deal, as well as entertaining scoring system and gaining points themselves. Proper planning can not please players, because luck may decide, that they get nothing in the end. This makes nice element for someone, while for another chance to unpleasant consequences. 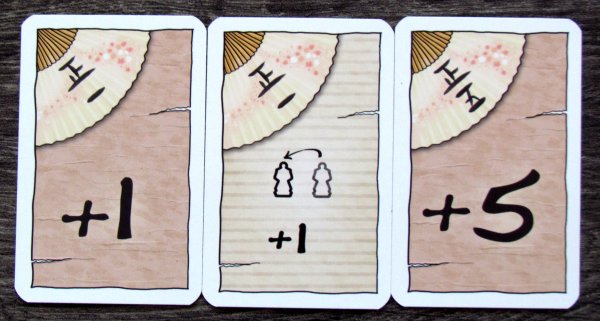 Takamatsu is outcome of a game design, in which pieces are running around the board without dice, but you still will not enjoy too much control. Game is the best with three players and entertains all, who still are missing a Mancala like game in their collection. On the other hand, they would surely be able to choose better game than Takamatsu with similar gamestyle, because it does not have much extra to offer.

- little control
- too long with five
- long waiting for turns