by Dušan on 23. 09. 2020
0
previous article
Review: Sails of Glory - under taut sails
next article
Review: Inner Compass - preparation for the journey through life
Contents 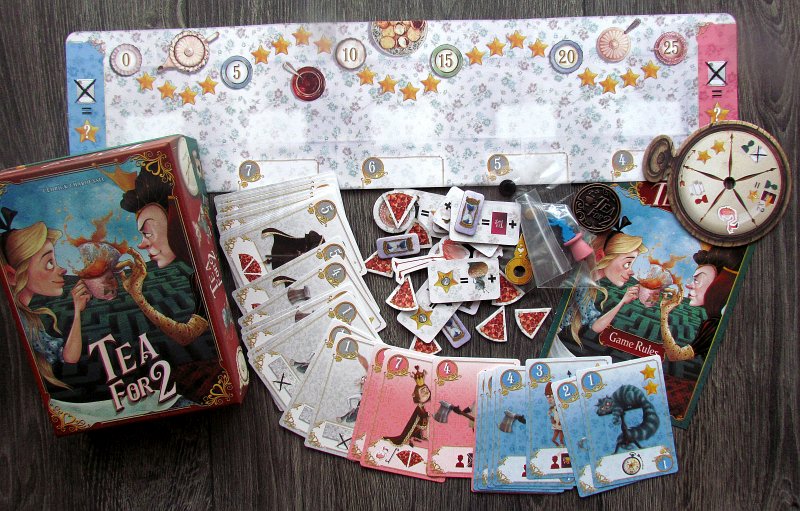 How many people can attend a tea party? There can be a lot of people sitting at the table, but for a real experience, you need only two. Only in this way does the smell of tea will not be too strong and above all there is enough time and peace for conversation on the level.

Tea party awaits players in the small card game Tea for 2, created by Cédrick Chaboussit and released jointly by Space Cowboys and JD Editions. Illustrations for the game were created by Amandine Dugon. It was released in 2020 and immediately went on tour in Europe thanks to Esdevium Games.

We see two cups on the lid of the box. But what is more interesting are the hands and characters, to which they belong. At first glance, we will know, that this will not be just an ordinary sitting, because its main participants will be Alenka and Kloboučník.Players place a scoreboard (made of hard paper and not cardboard) above the playing area, which has five positions for cards. A randomly shuffled set of cards with the same point value (between four and eight) face up is placed in each position. They place five task tokens above them in random order. 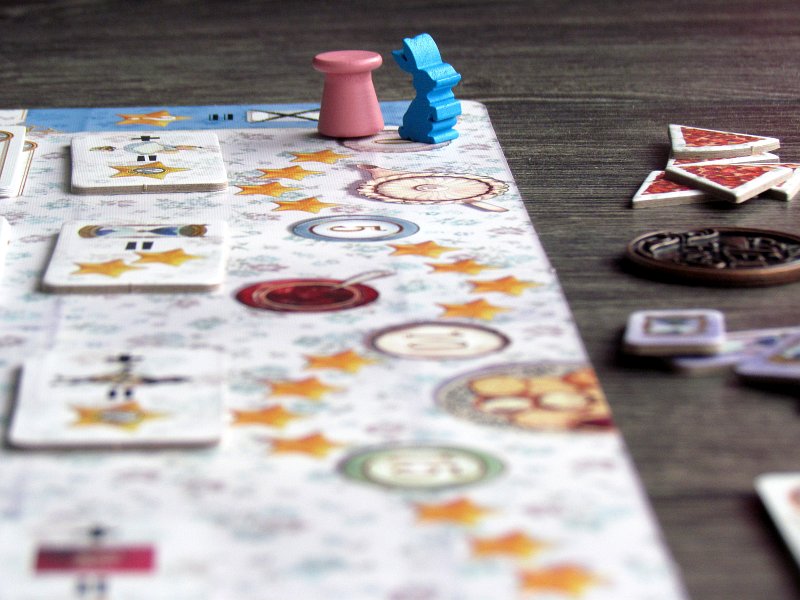 Both participants then choose their miniature (rabbit or hat) and place it on the starting space of the scoring scale, while putting two tea cup tokens on the last one. Depending on the chosen color, players also receive their set of nine character cards, which they shuffle and place in front of them as a draw pile. In addition, everyone will receive starting equipment – pieces of tarts and the beginning player will also have a pink flamingo. Remaining cardboard components (rest of the tarts, hourglass tokens and rabbit cards) are left within reach. The same goes for a cardboard pocket watch with a hand turned randomly.

Players both reveal top card from their character deck and move it to the discard pile. They compare its value and the one, who has the higher value, becomes the winner of the round. For this, he will have an important opportunity: either to use the effect of the revealed card or to buy one of the cards in offer (the top cards of the five decks) for the previously obtained stars. 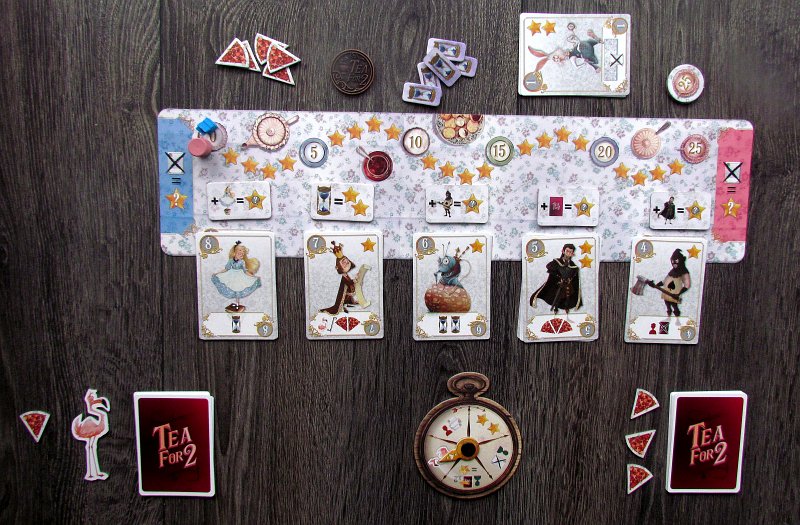 With the help of cards, players can earn tarts, stars and hourglasses. And then they simply buy new cards to add to their discard pile. There they will have value at the end of the game as players try to complete tasks from the revealed tiles. However, the player does not have to pay the full price for any card, because he has an amount available to spend on his turn corresponding to the difference between the values of the cards (because his card is always wearing higher number, as a victor of the round). Remainder then can be paid for with the help of tarts.

But for now, instead, they will also use the card actions to manipulate or even destroy their opponent’s cards. For this (with the help of the executioner card) the player receives a reward in the form of stars of the same value as the card. An important part of the action is also a pocket watch, the hand of which players can move (by playing a card or spending hourglass tokens) and receive a reward for space, where the hand stops.

Players continue their efforts even if they run out of cards in the draw pile. They take the discard pile, shuffle it and create a new pile. In addition, with each such rotation, they add one rabbit from the supplementary pile to their discard pile before shuffling it. 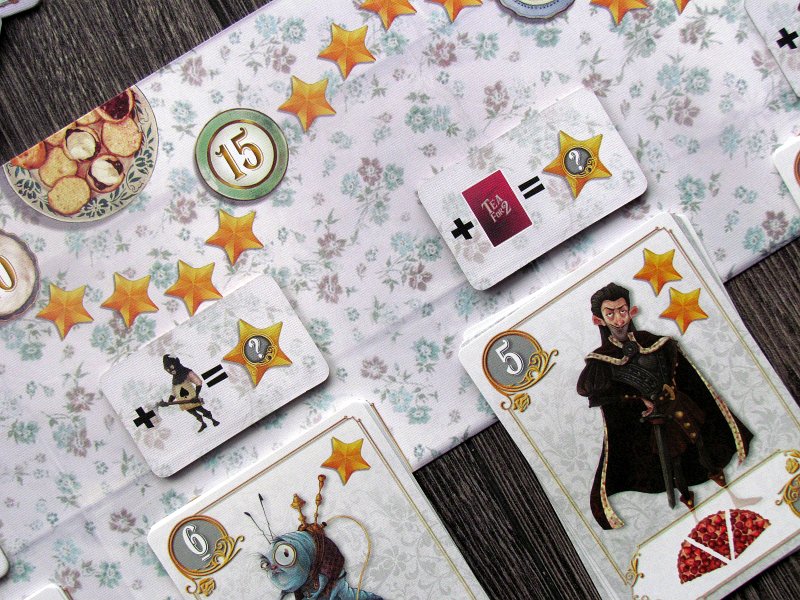 All this is repeated until four of the five offer piles are empty. While the stars earned during the game are recorded on the counter, others can be received for completed tasks from the tiles. They may want players to collect tarts, hourglass tokens or domination in a collection of cards of a certain kind. The one, who has more stars in total, becomes the winner.

Tea for 2 takes the classic random game of War as its basis, but makes the inconspicuous mechanism of turning the top card of the deck a really interesting game for two opponents. Whenever someone wins the card turn is just such a prelude to everything, that happens next. Only the winner gets a chance to use action. These are evenly distributed throughout the game thanks to probability between the two participants. Although it may not seem so at first glance, in the end, coincidence is not the determining factor here, because there is no need to finish with luck (I am looking at you, last card!), as in the War game. 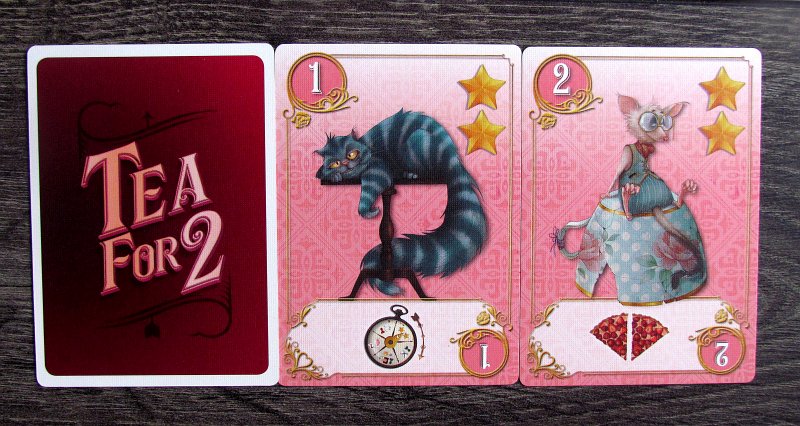 Opponents are building their decks in a very unconventional way. In the end, it’s just a package, which turns from a discard to draw pile again. But the path to it and the purchase is really different from anything we have seen.

In addition, tasks themselves are visible, still public, and players must consciously try to overcome their rival. But a number of cards allow them to go even further and attack their opponents directly. Either by forcing them to discard some cards from the draw pile or to destroy a card held by the opponent straight away, and still get a reward for it.

In addition, all those interesting ideas are put together so well, that the whole game fits in about twenty minutes. In terms of the number of participants, everything is clear, because this (as the name suggests) is a matter for only two rivals. That’s good, because thanks to the clear division of pages, everything works great. 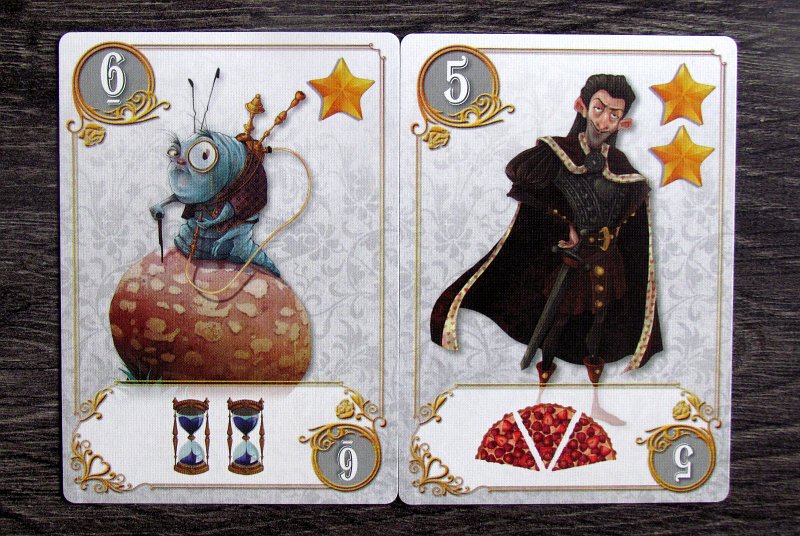 Apparent trifles can always please you in the design of cards – it doesn’t matter if you hold the cards correctly or upside down, at first glance you always have their value in front of your eyes in the upper left corner. The processing is nice and graphic, and the theme of the game fits quite nicely, as both participants in the game exchange cards, as compliments over tea.

Tea for 2 is a beautifully original game and a mix of mechanisms, that you would probably never think of connecting. This is an even more valuable addition to the collection, because in terms of processing and playability, it is a quality fun. Coincidence will of course be your eternal companion, but Tea for 2 is exactly the type of game that profits from speed and luck.

Tea for 2 is a simple card game in the heart of which game of War is raging. Some may mind this and may say, that there are not enough meaningful choices in the game. But that is exactly the beauty of its simplicity, in which it still offers players opportunities and control to a certain extent. Above all, you will have fun with the Tea for 2 game and the pair of rivals will fight really intensively.

by Dušan on 14. 09. 2020
It’s not easy. Every phonering, every shout outside. Everything can be a sign, that we will have to go to work, regardless of our own safety. We must [...]
Comments
Leave a reply