by Dušan on 23. 06. 2014
0
previous article
Review: Sonne und Mond - when the sun sets and the moon rises
next article
Review: Citrus - oranges, lemons and grapefruits at your fingertips
Contents 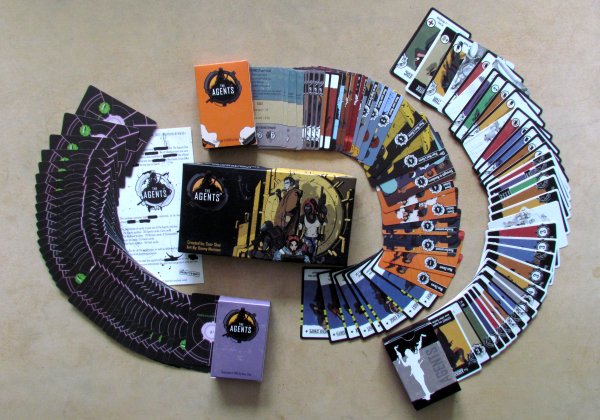 When Bob came to me and told me, that our agency ends, I thought, he was joking. This sort of jokes were not uncommon to him. Most of the time with work stress, we have humour at least as some sort of therapy. But this time, Bob did not smile leaving and I began to suspect, that something is wrong. The next day, they would not let me through the gatehouse and third day, some nameless workers changed sign on the house. This is the end.

Panic. Only like this can I describe feeling of agents, when they realized, what was going on. We are without a job. Some weeks, we just wandered aimlessly here and there, invented our own missions. But without a goal, none of them made sense. We have heard, that similar things happened in Russia, UK and China. And then came the news. Some agents stood against all and want to remake the world in his own image. Finally something is happening. A new war begins. War against rogue agents..

In the world of agents, water and blood really boil and players can take part in this fight. A card game allows them to do so, its called The Agents and published by author Saar Shai through Kickstarter platform. The illustrations were taken care of by Danny Morison and game went from printer to first owners in 2013. 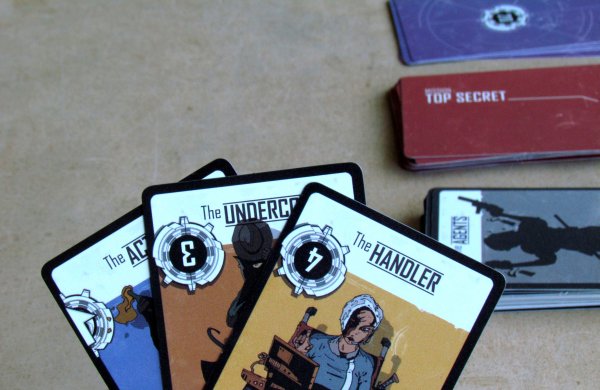 When you find The Agents in the mail, an elegant elongated black box with an illustration of several spies is waiting for you. Inside, you will find three more boxes with cards themselves. Each has a different color and lettering – black as agents, orange are their missions, while purple color is for points. Each box of course hides a deck of cards.

Individual decks are then different from each other. Most interesting is pile of cards with agents, that seems interesting at first sight. They have name printed on the top side and description of capabilities at the bottom, those are we all accustomed to. But next to their name, there are icons, that are upside down and often even halved. You probably already guessed, that you have to combine more cards to create whole circle. An action text below contains also an icon, specifying the type of the action.

Point cards are less interesting. This color card has only a digit in the middle. Colors distinguish values from one up to a maximum of twenty. Third package contains missions cards, which are oriented horizontally. They contain a name, point value, and in particular description of the tasks. Deck of cards also contains a help cards with an overview of the gameflow. 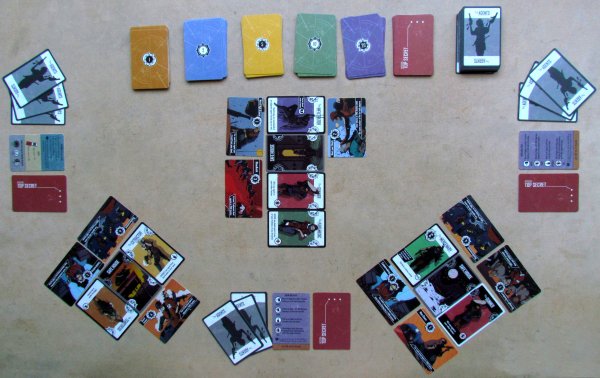 So we got to the bottom of content and we can now tell, what you need to take with you for training, when you want to become real agents. It’s very simple to get it all packed and ready. Sort and divide point cards into piles according to their values. Missions and agents create each a separate drawing deck. Each of players gets a random trio of agents and one mission into his hand. Players can then put a safe house card in front of themselves. That building serves as foundation of individual factions. Here, the agents will meet and fulfill their missions. Each player has two such fractions, each shared with one of his neighbors – one to the left and one to the right.

Now you are ready to play. Players have in their turn each two action points. These can be divided in any manner between four different activities. Most important of all is sending an agent to one of the player’s safe house. Card can be attached only to the end of players line, which is gradually growing. But the most important thing is rotation of the card played. Obligation to perform action described by the text on the card goes to player, to whom the card text is rotated.

Here, however, decision is influenced also by chance to complete data-tokens. Their half is present on almost every card, where agents can be found. If player succeeds in creating a full circle in his turn, it means point gain for the player, towards whom is the assembled arrow pointing to. This, of course, is always opposite direction as text. In addition to conventional agents, players may come across free agents in the game, who give out their rewards immediately. In both cases, player takes the appropriate number of scoring cards from the bank. 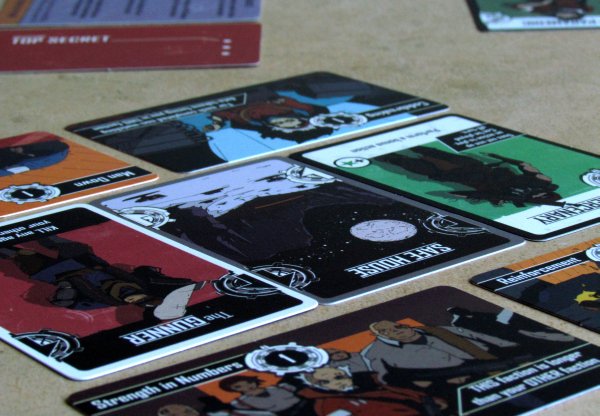 In addition to agents themselves, players can also play missions. Once they are able to fulfill their task, they will receive immediate rewards in the form of intel points. Such missions remain in the game and continue to provide some benefits to their owner.

Playing a card is not the only activity, which players can perform. The second and very important tactic is the ability to re-do any action of agent in the field, whose text points to the player. Therefore, players are allowed to use even enemy cards, which are turned with text to them. Intel points then can (and must) be spent on buying new agents and missions (costing one and three points) or changing mission in hand for a new, randomly drawn from drawing deck.

Game ends, when one of the opponents earns forty intel points. Other players have a chance to finish the current round. Whoever then has highest total is the winner of agents war. 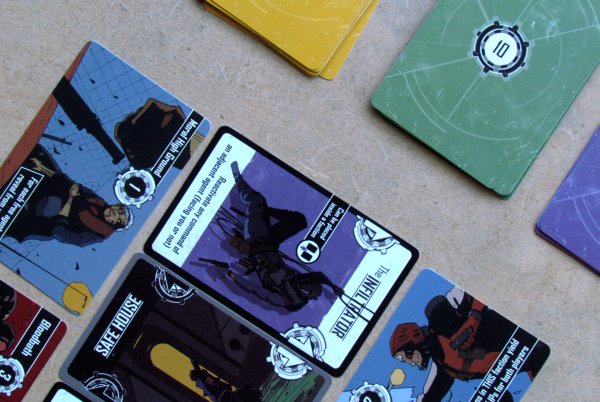 The Agents is great card game, there is no reason, to keep it secret anymore. It offers absolutely unique mechanism of a double-edged playing cards. This brings players before a difficult decisions every time, because whenever you play for yourself, you push your opponent also forward by awarding him something (points or action).

Agent can for every card choose, whether he prefer to take advantage of text and donate points to his rival or vice versa. Regardless of the situation, it is not an easy decision to make. Plus, you can even choose (in more than two players) an opponent, to whose neighbourhood you put your new agent.

The game very cleverly deals with a duel. Both players now have exactly two shared locations, which can give a feel of the game, that is really close to a game in three. Yet still the game works and stays focused. When more than three players get together, then two opponents sit opposite to each other and are too far apart. They share no faction card and can influence each other only occasionally due to specific cards. The Agents still remain very fast card fun, which is over in thirty minutes. 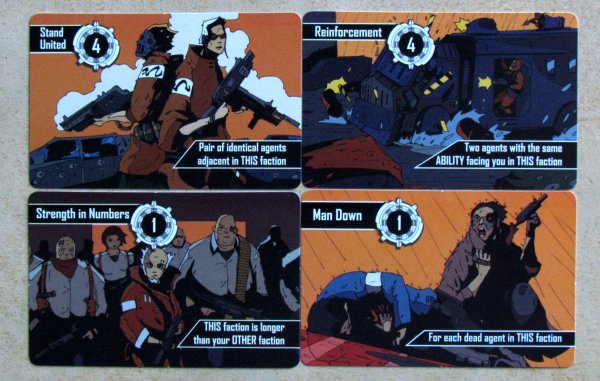 The game is full of dirty tricks and conflicts, that arise from common locations. The most important are the skills of agents. Each has different abilities, that allow you to manipulate other characters in the game. You can kill foreign spies, drag them to your side (= rotate by 180 degrees), move them to another location or even take any of the agents back into your hand. You can see, that possibilities of this unique mechanism are really used to the last detail, and because of that, the game feels very compact.

What surprised me most about this game personally is how well the atmosphere really corresponds to secret agents conflict, just like I was surprised earlier by a game Hooyah (review). Although you draw them randomly from the deck, they use different methods and tricks, just like in a cold war. This is just a game for fans of the right spy atmosphere. 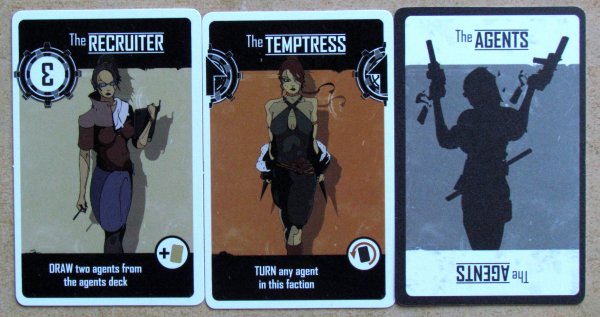 Although the rules are simple, you will be unable to find answers to many specific situations in the rulebook. You need to look in the forums at least until revised manual is released. Just at this moment, author is preparing second edition of The Agents, including incorporated comments of players. Rest of the processing is perfect, including illustrations, which seem very professional.

The Agents is an excellent card game, whose only drawback is the manual rules. If you learn to play it, you get to enjoy the true agents’ work in the field and everything, that goes with it. And who does not like to be a secret agent? But now you get to literally love it, because this is a really great game!

- rulebook does not solve all game situations

The Agents is a card game from which enthusiasm radiates. This is exactly, how every game should look like, when its published through a community funding, whether its on Kickstarter or elsewhere. Players recruit agents and send them to locations they always share with their immediate neighbors. And by playing cards, you help not only yourself, but also your colleagues. You can simply choose, who gets the points and who will be able to use its action. Beautiful and original mechanism especially supports the amazing atmosphere, which is supported not only y great graphics, but also skills of individual agents. You will therefore encounter everything, what belongs to true spy work. Its a pity, that rules have not been given sufficient attention and do not cover all game situations. The Agents deserve to be center of your attention now, because this kind of entertainment in half an hour? Rarely.