Review: The Aquicorn Cove – saving the day.. and bay

by Dušan on 27. 03. 2020
0
previous article
Review: Fuji Koro - the storming mountain refuses to release its treasures
next article
Review: Dragon’s Breath The Hatching – with egg on top 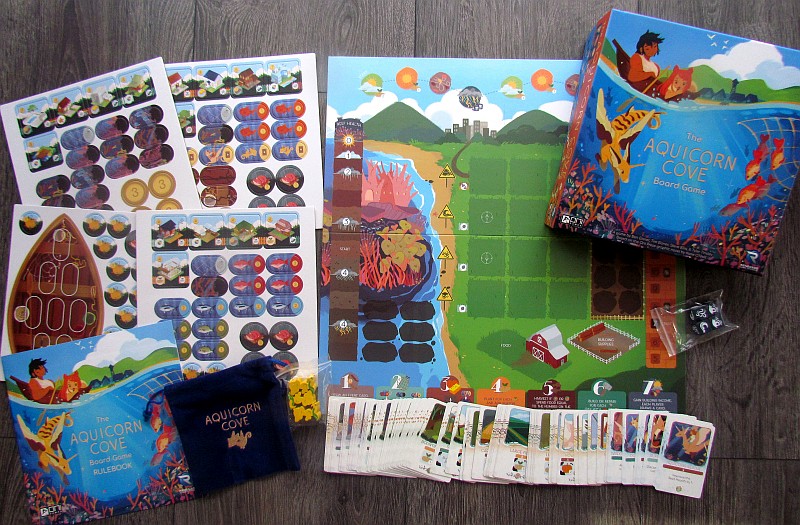 When I was little, I loved every minute I spent in the bay. I swam through the calm water and playful aquicorns danced around. It was like we belonged together. As I grew older, it seemed to me, that number of creatures in the bay had diminished. I attributed it to the fact, that they do not want to play with adults as much as with children. But then I saw the pollution a few weeks ago, washed out on the shore and suddenly I understood. My little friends don’t hide from my eyes, they’re nearly gone!

Fortunately, however, these aquicorns did not disappear completely. But there will be no time to play with them. Instead players will get a much more important task. In the board game The Aquicorn Cove, a designer quartet Ben Eisner, Tim Eisner, Tyler Tinsley and Steve Ellis invite us to do a proper bay clean up. The game was based on the book of the same name and got therefore determined its graphic design, prepared by Katie O’Neill and Samantha Knowles. The game was released by Oni Games (Oni Press), distributed by Renegade Games Studios and brought to Europe by Esdevium Games. 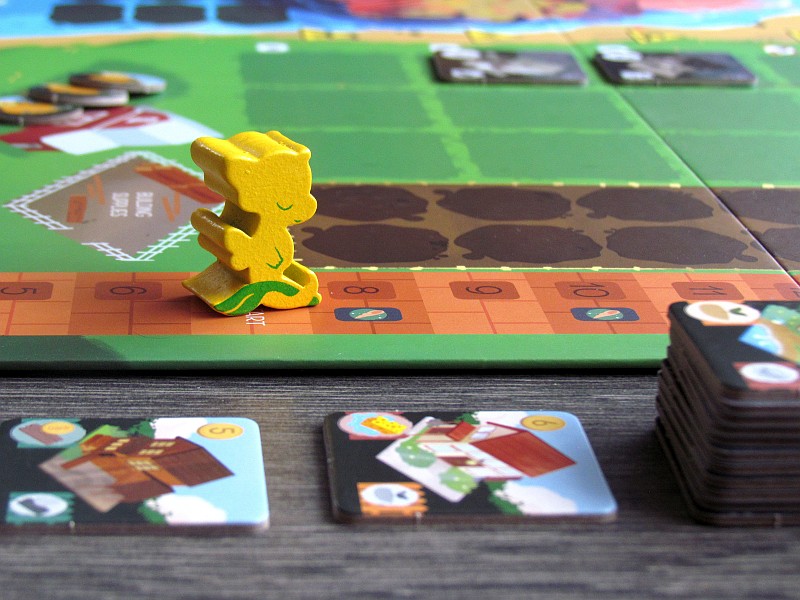 On the lid, players see the bay and water exactly as their residents would like it to see. From the box, players draw a large game board, in the right part of which is a place for a village. Here, players place two starting tiles, shuffling all the remaining ones and placing three of them next to the board. Next to the village is the barn, players place three food tokens and mark three scales – pointer on the first space of the seasons, but also have to note coral reef’s health and village’s prosperity. Near the main map, players will also place a ship board in preparation, with four positions occupied by the ship’s tiles.

In addition, players fill the bag with fish and empty net tiles, but also add one aquicorn and tiles of pollution (based on chosen difficulty). The game will also need shuffled decks of events, aquicorns and villagers. Each player chooses a character, receives a portrait card, and draws three starting cards from deck of his character.

At the beginning of each round, the main role is given to an event card, that the players randomly reveal to determine the effect and eventually the chance they get. The card is always tied to one of the successive stages of the round, which all participants go through together. At this stage, however, everyone also chooses one card from their hand. The one, they want to use according to actions. However, they can discuss their plans with others, before placing their card on the time scale (at the bottom of the board). These cards provide food, raw materials or chance to build. 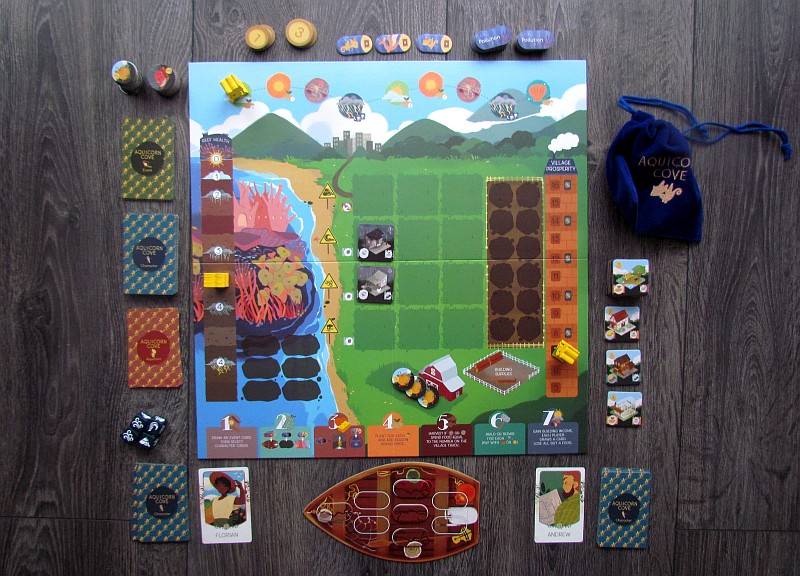 Most of the choices are made sequentially and the first is (with number 2) fishing. One player draws tiles from the bag and all the players hope for it to be fish, because they are good. Player draws one token at a time and can decide to stop at any moment. Among the pieces there are not only empty nets, but above all pollution, which can also be stuck in your net. Much more dangerous, however, is when players draw the same type of fish for the second time. Such tiles (unlike others) will not return to the bag and are discarded for the whole remainder of the game, because none fish of this type are present in the bay anymore.

In the next stages, players get food, plant one to grow and prepare the harvest for the next fall. An important element of the whole game is also the construction of buildings, but have to be paid for with food or raw materials. They have to follow simple placement rules, but they also bring important rewards to the village at the end of each round in the form of new resources. In addition, the prosperity of the whole village will move up.

An important element of the whole game is pollution. If players fight it successfully, their pointer on the coral reef scale moves upwards, increasing the number of aquicorn tokens in the bag. 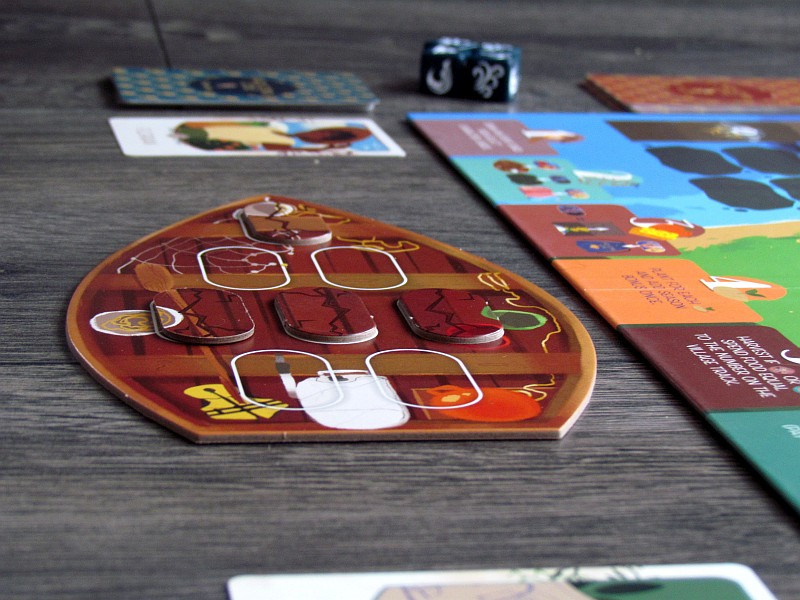 After playing the prescribed number of rounds, the game goes to its epilogue, where players can harvest, repair buildings destroyed by storm, and then the whole team reads their scores to see how their two missions have worked out – maintaining prosperity of the village and restoring the coral cliff. All get verbal evaluation based on combination of scores they, have on both scales.

The Aquicorn Cove is a game, in which you do not win or lose. There are many other intermediate stages between success and defeat, that require separate evaluation. So this time, the players will receive a rating on a scale that makes sense and explains how they actually did overall. 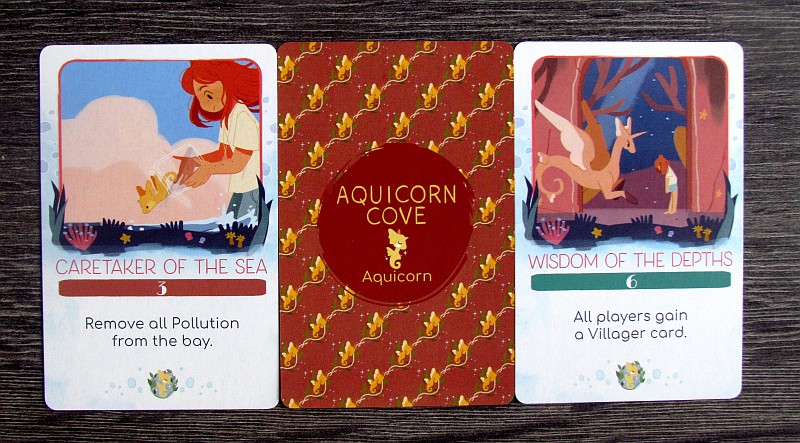 It is clear that when drawing fish tokens from a bag and evaluating a thunderstorm, players get stuck with chance. And the team has to deal with it, but with a bit of bad luck, the highest rating for everyone can be just, because the dice were simply too bad symbols and the buildings were damaged. The players’ efforts are packed and it is not easy to deal with all this well.

But that belongs to the philosophy of cooperative games. They should be at least a little difficult. But here the difficulty really lies in part on the random draw of chips. Players still have a lot to think about and can try to fight it. This, along with an interesting environmental theme, is the most interesting thing you can find on the game.

The game is cooperative, so everyone can talk all the time, discuss the cards. The whole course is beautifully arranged, because the game board itself contains gradual steps that the game goes through and uses these positions to play cards and their evaluation. It’s a clever way to get a clear overview of all-round events and helps families and beginners, which are the main group. 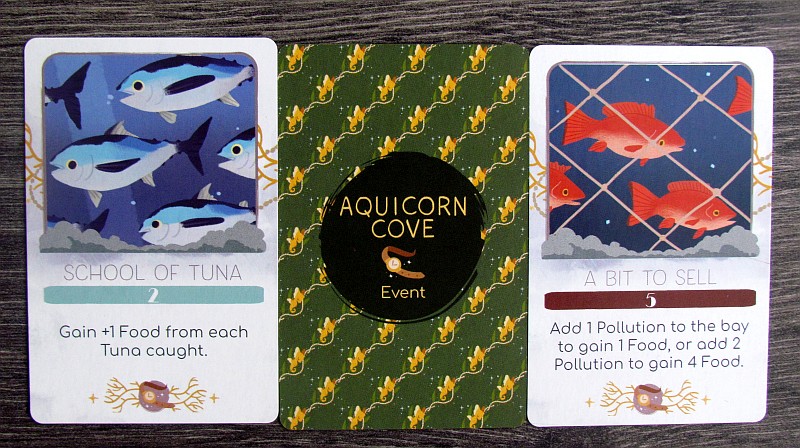 In general, The Aquicorn Cove is a game designed to engage children with their parents. Appealing colors and especially game time, which in extreme cases is no longer than 45 minutes. The game has a clear framework of rounds, through which the players go through and because everyone cooperates, there is not much opportunity to slow down the course.

Unfortunately, playing in two is not optimal. For a better experience, we recommend a higher number with a maximum of four participants. In two, there is not much possibility to influence the timeline. Instead, players have an auxiliary package, but the overall impression of cooperation is spoiled. 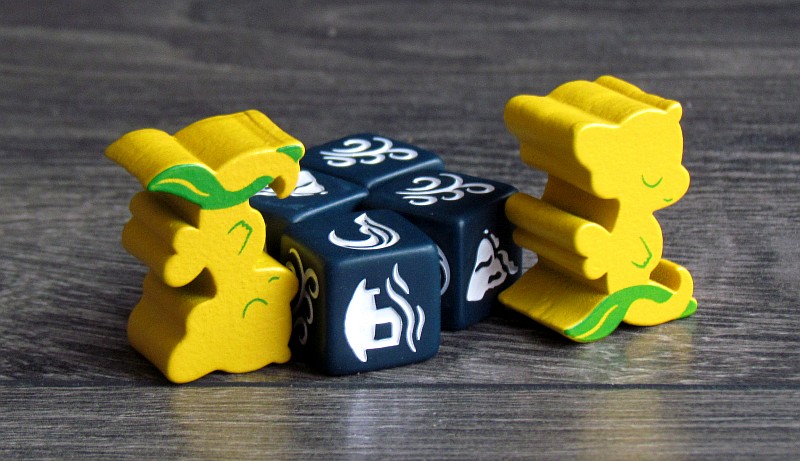 The Aquicorn Cove is an environmental agitator, as is probably even the original book. Environmental feel can be smelled from far away, but surprisingly it doesn’t hurt the game at all. The game has true sense thanks to chance on saving the coral reef. And The Aquicorn Cove should definitely not be lost in the world of family cooperative games as it is really good.

- chance
- not as good with two players