Review: The Captain is Dead – on a ship without a leader 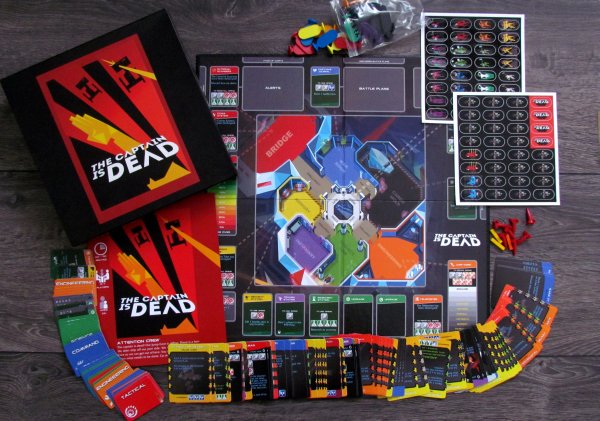 It could always get worse. Today, I discovered, that whatever you say, it´s never the last bad thing you may come across. Therefore since then, I prefer to keep my mouth shut and maybe, just maybe, I will not end even worse. If I kept to myself report about finding cat in our cargo hold, none of this would probably have happened. Our captain would not fall into a hole and will not break his leg. Navigator acting in his place would not have caused a fire on board because of his awkwardness. Consequently, it was an electric shock next to his bed on infirmary, that killed the captain and electrical flash summoned enemy ships, whose territory we were in. What a day.

Nothing but bad news are waiting for you in board game The Captain is Dead, which was invented and transformed into a board form by Joe Price and JT Smith. The latter lended a hand even, when it came to illustrations together with Gaetano Leonardi. Board game was their common work and it got published under logo of The Game Crafter LLC in 2014. At its inception also participated equally incredible number of 1,734 fans on Kickstarter, who gathered together over $ 100,000 compared to required two and a half thousand dollars.

On the wings of such success came a low, square box to our table and caught our eyes at first glance with its extravagant illustrations. Inside, you will find a folded game board with a map spacecraft and all the important rooms from captain´s bridge, through the infirmary up to the engine room. And also a lot of positions and scales around it all. 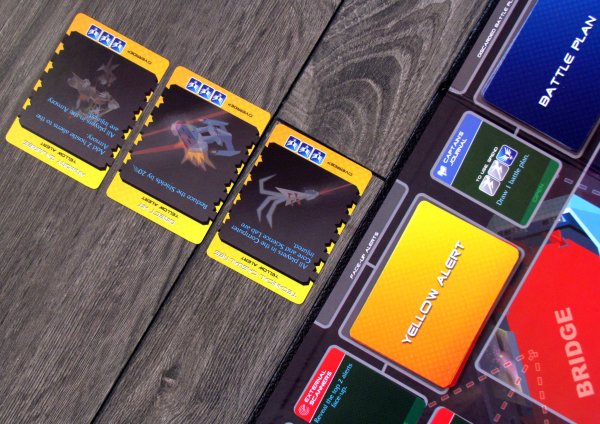 Players will also see a thirty plastic figures, whose oval body has to be equipped with stickers to deliver those pieces a little personality. Players then also get seven plastic torpedoes and three wooden sticks (serving as status indicators) and then two stacks of cards. Smaller ones are systems enhancements and tools, but also ability cards (commands, science, engineers and tactics). Larger cards prepare three levels of alarms, sixteen battle plans and eighteen roles.

At the beginning of the game, players deploy six status cards on the board and systems enhancements are placed as inactive on specified place under it, close to their activation spot. Alarm cards create one pile ranging from red at the bottom to yellow on the top. Each deck must be shuffled before putting them together. Top two event cards are revealed for all players to see. Your scanners told you, what problem is rushing towards you.

Players marks shields on 100% and other scale helps them to choose difficulty. Skill deck is shuffled, and each participant receives five cards from it, while three more are uncovered next to board and rest put on table as well. Figures of black intruders and torpedoes are ready at their posts, while players performed last setup action – choose a role and all the pieces of the same color. This color also corresponds to place on ship, where figure begins the game. 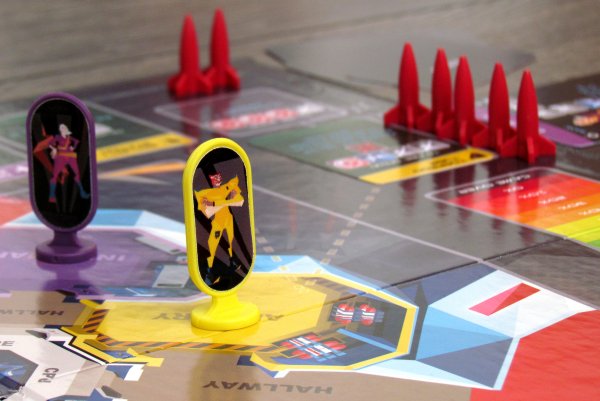 Before crew members of ship start running to their tasks, it is time to learn ship´s initial damage, which caused this havoc in the first place. Players help to identify them by evaluating first five alarm cards. Their text must be immediately processed. Each character then uses his action points printed on his character card, usually four. These can be used to move up to two rooms, pass on tools, skills, but also kill an enemy in the same room.

Every turn, players will also use variety of abilities of rooms around the ship. Even their activation is paid by action, which is printed directly at the site together with other instructions. It is often necessary to pay for it with skill card. Cost value can be reduced by any special abilities of a given role. Some systems will be damaged during a game, they can be gradually repaired and reused. This main objective is to fix core drive, that will allow players to jump with ship from the sector back to safety.

But danger is still accumulating around fuselage. At the end of each turn, player evaluates new alarm card (one of two revealed) and then draws new one to take its place. Thus, players alternate in examining anomalies, firing torpedoes at enemy ships or acquire new skill cards through computers and sensors. Alarms can also be fought with abilities by using three points and evading events before they occur. 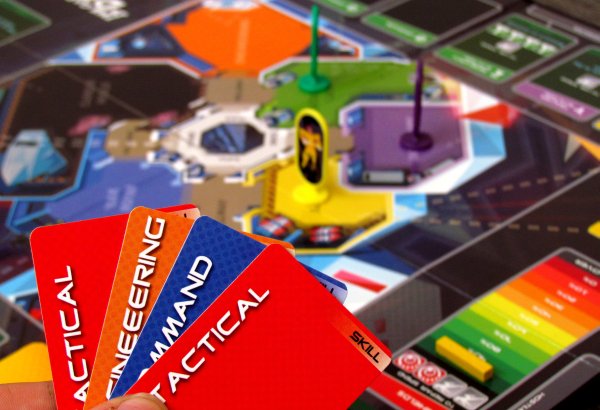 Players alternate in their effort and crazy running around the station (with help of a teleport). They can also use battle plan cards obtained on the bridge. Still, sooner or later, they will have to record win or loss. Victory is reached, when core is repaired and ship jumps off from destruction. Loss happens, when shields drop to 0, players are overwhelmed by aliens (all their figures are used) or even pull unfortunate red alarm card.

The Captain is Dead is hectic sci-fi game, where all are in this together from beginning to end. Most of the time, players are just running like maniacs around the station and trying to fix things, that are collapsing under the onslaught of unlucky events. And only if they find some free time, they can fix part of the core and move closer to victory. But more importantly, towards survival.

Claims on players with progressing match increase, as worse and worse alarms come into play. From time to time, some other vessel emerges next to your ship and while, it will not destroy you entirely, it will constantly diminish value of shields. At these moments, main priority of all crew members can change very quickly. And game is full of such situations making it an everchanging experience. 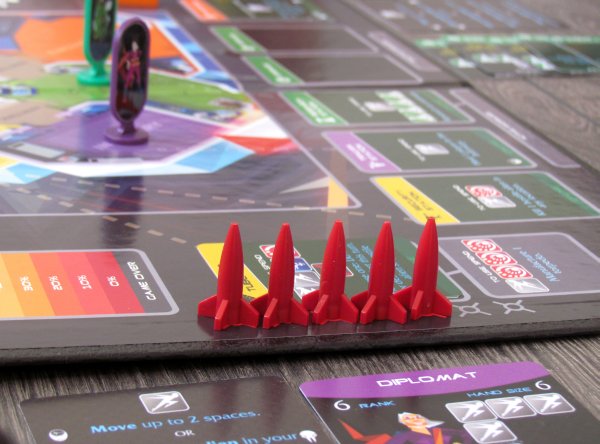 You are really fighting for your lives. Atmosphere of this game is dense and will not let anyone from the team to breathe freely. Even outside of your turn, you are at least trying to advice and help others, because it´s always about saving all your necks together. Fortunately not in real time.

This cooperative game plays great thanks to its theme. Because alarm unfolds after each player´s turn, is thus excellently solves scalability for different numbers of players. Turns are fluid, because the actions menu is not too wide (you can find it on overview card) and especially, what needs to be done is often result from a story, that is told by the game.

There are no hidden information or a traitor in here, so like many other cooperative games, its prone to control by one dominant player. But this is a known syndrome all these games, where you just have to be careful in choosing teammates. 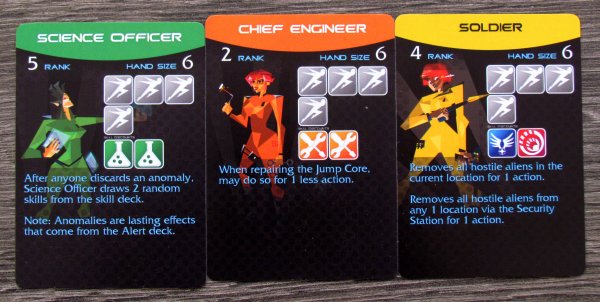 But uniqueness of characters will make up for it at least twice. Each role is different and offers different tactics, but also has a different limit of cards for player´s hand. Best example is hologram, that cannot physically interact with environment, but has other advantages. For example, it cannot be hurt by anything.

At first glance, it all looks a little complicated. Setup is a little more challenging in the first game, because you do not know, what exactly belongs where. Once you penetrate under game skin, it is easy to grasp or teach to others. But only when talking about rules. Actual difficulty, when it comes to winning, is in fact set very high and progressing on higher difficulty needs really good team. We lost several times even on the basic settings. Length of the game is a little above average and can get over 90 minutes, but this is the price for game working wonderfully up to maximum of seven players!

All this is ultimately about team harmony, anticipating, and little bit of luck needed in the moment, when you arrive into red events. This uncertainty however results in great experience, that can boldly compare to the best co-op games out there (especially sci-fi). Thanks to randomly drawn cards and also many roles, game is flexible enough and full of interesting situations. 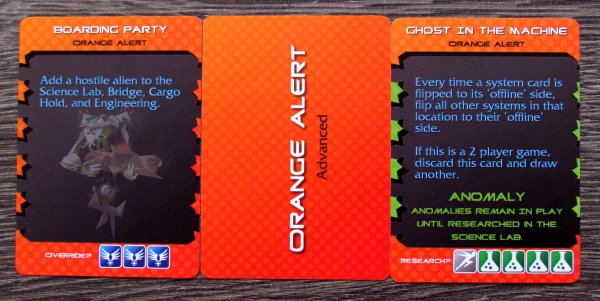 Processing is nice, especially if you look at the graphics. This game differs sufficiently from classical current of pleasing, ironed illustrations. Oval stickers on plastic stands are nothing special to represent heroes, but it does no harm to the game.

The Captain is Dead tells thrilling story, which may have several endings. And even during the last turns, you cannot be certain, which one will it be. Game offers a lot of unique experiences, that can only occur, when playing co-op, and only shows, how much better could Damage Report (review) be. Coop and sci-fi is here once again in top shape, and we can boldly recommend The Captain is Dead to all fans of space.

The Captain is Dead puts you in the unenviable role of several characters. A wide range of roles ensures, that the game will always feel different and fresh. Fight to survive long enough to try to repair core and jump to safety, but destruction to your ship depends on the random alerts. Each turn, players have a number of actions, which can they split among movement and actions in rooms. But these locations are gradually destroyed (can be repaired) and it is not easy to keep a chance to win. Game is difficult enough and like many other coop games, its subject to dominant player advicing. It takes just as long and tells great fictional stories. The Captain is Dead will find fans in everyone, who is related to sci-fi and likes great entertainment.