Review: The Sheep Race – wooly sprinters on the run

by Dušan on 02. 02. 2015
0
previous article
Review: A Game of Thrones HBO Card Game - card game based on series based on book
next article
Review: Origin – where does mankind really belong?
Contents 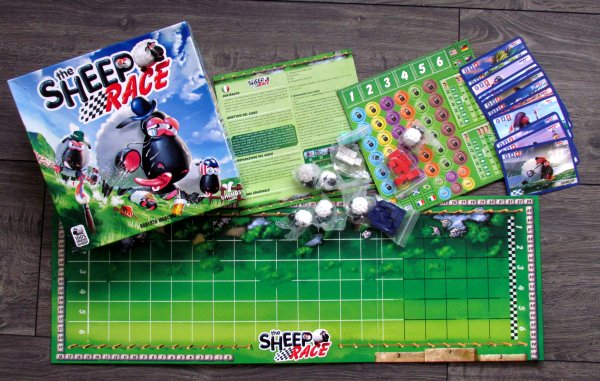 Sheep are not exactly the best racers. And yet, they also want to have a medal around their neck. It does not matter then, whether they arrived from opposite side of the globe, or if they wear a kilt and are almost at home in the circuit. Each has his own strengths and weaknesses. But none of sheep can reach the finish line on one breath. Not even the prospect of victory will prevent them from stopping, resting and then continue towards the checkered flag.

But seriously. Such races do exist and many of them take place in the British Isles. Sheep are running straight, but they have to deal with holes and stones on the track. Maybe Roberto Mancini was there on vacation, because he created in 2013 game called The Sheep Race with illustrations by Federic Musetti. His idea was seized by the company Ghenos Games, that published all the result under their own brand.

Game is hidden in traditional square box, which is carefully wrapped in grass. On the front, we see sprinting sheep with a determined expression and tongues lolling. It can be the difference between winning and losing. We´ll find out quickly, who will be winner, when peering inside and discovering not only rules, but also game board folded into thirds. After you open it, you get a long straight sprinting track. Six lanes, twenty fields, five last being special. 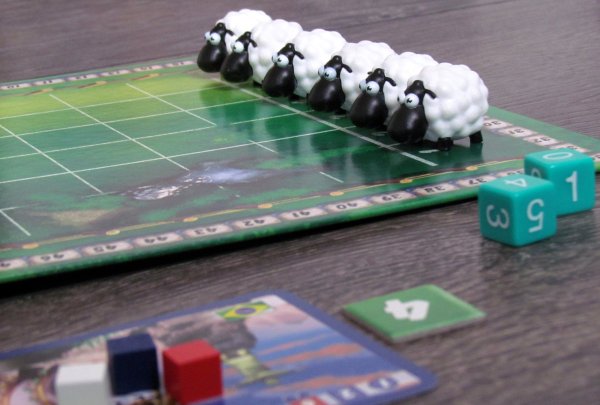 Around the race course winds a scoring track, which will hold all player identities throughout whole racing season. They will take become bettors this time and they need six round tokens in each color. These have numbers ranging from one to six, to name all competitors, that can win. There are also square tokens with racing numbers for sheep, small flag chips and help cards.

But we are not finished. Package contains also oversized cards always showing a sheep in its natural home. For example, the South African sheep is looking at the zebras in the desert, while the Spanish is bullfighter by profession. All have names and flags together with two important corners – first one is showing ability of sheep. Three numbers correspond to three possible running speeds – walk, trot and gallop. In the upper right corner, we can see, how many sheep initial breath has sheep to spend, before it going to need to rest. And we also would be happy to see beautiful sheep miniatures, three dice and small cubes of breath.

At the beginning of the game, players spread game board on the table and place one of the six at a glance exactly the same sheep at starting field of each track. You can distinguish them only using cards. Six of twelve cards are drawn and randomly assigned to divided plates starting numbers. This will determine, which sheep would run in which lane. Now, first semifinal needs only bettors. 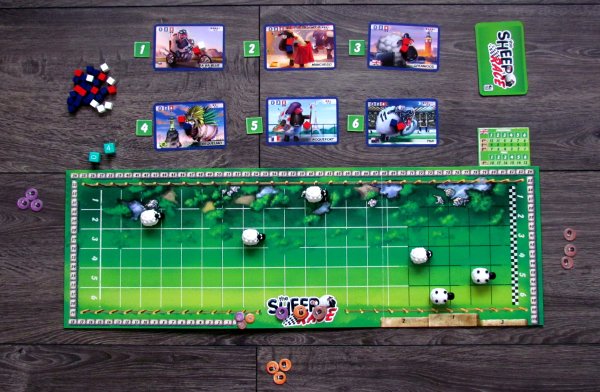 Players have to choose color of their tokens. Six betting are given to each player, while tiny scoring chips are placed on start of scoring scale. Together they splits breath cubes (blue, red and universal white) on sheep cards according to their stats. Each sheep has a slightly different size of lungs. Then players have to choose the right pair of dice and first race can begin.

But before you start, everyone must bet on three sheep, which they would like to see on the podium after race. Here is first moment, when tactic becomes important, because not only are individual sheep stronger and weaker, but above all, lanes on the track are not comparable. Fastest is six, while the slowest is a rocky number one. Here, race organizers have hesitated a little, but it is more fun for the players like this.

Once every player has made his bet, starting player may roll a pair of dice. Sum of dots on both dice determine, which sheep will run forward. There, however, can be up to nine dots, but there is only six sheep. And imagine you rolled a higher number. Now what? Well, because six is the fastest and sheep in this lane moves even, if you roll number seven. Eight moves forward fifth lane. Nine is then a specialty – sheep that is farthest back can run now (in case of equal position, higher number runs). 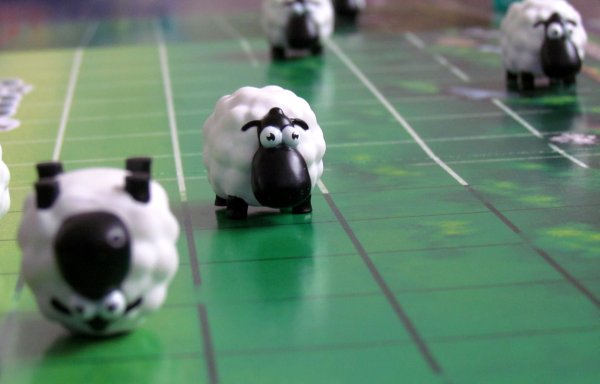 But that´s not all, because the choice of a sheep is not on the players, other decisions are waiting for him. You can choose, how much effort will this shaggy racer put into sprint. The choice is from three speeds or even rest, which adds two new blue cubes of breath. Red cube can be replaced by two blue and provides the fastest running, while blue is a little slower. If the sheep walks, it can catch its breath and get one blue cube without spending any. However, the two resting activities can only be done, if it is tired.

Sheep players have the opportunity to strategize well during their turn. For this serves primarily white cube, that can be used for any speed. It is then up to the players themselves, if he spends it for walking and delay sheep or play it as red and it moves forward. Sheep move on track forwards until they reach finish line. They have no longer any chance to rest. Whenever a sheep loses its last breath cube in this zone, it falls to the ground from exhaustion and does not finish the race.

Whenever three best runners are known, race is finished and these three best racers advance to the finals. Players collect point reward for their correct bets. The slower lane sheep ran, the more points players get for its place on the podium. After the second semifinal with six other contestants, last bet is done. After the final run is over and points are dealt, winner is the player, who gained most points. 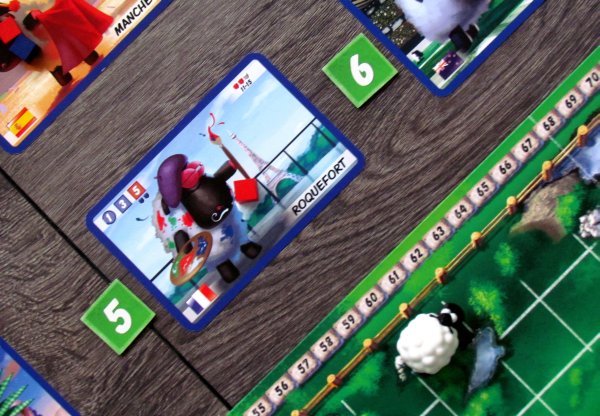 The Sheep Race is another in a series of games, where you are trying to predict outcome of a race and you can affect it to some extent. But this game goes a little differently. It found the ideal balance between chance and opportunities to influence sheep runners. Players have constantly a feeling, that they have chances of sheep under their control. You are big fan of some of them? Then quietly cut a rope for other ones, using situation, where contestants run out of breath in finish zone! They will not get up and almost certainly would not place on podium.

One of bets during the semifinals is public. Players know, what their opponents chose and can plan accordingly. If you do not have same sheep in your own two secret tips. So rivals have a chance to harm each other and try to eliminate other sheep, which is incredible fun.

Decisions are waiting for players. First is made already in the beginning. Do you want to bet on sheep with better chances in the sixth track, which has a higher chance of winning? But watch out, because even if this sheep wins, it will bring only six points! So it is worth risking a little, since victory of the third lane brings you nine points and even second place of this lane is worth same amount of victory of runner in six. 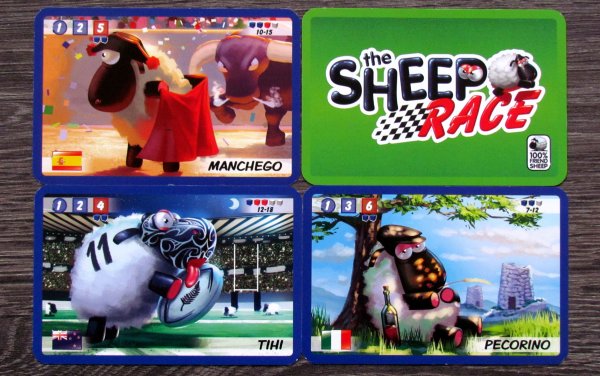 Although at first glance, it does not look like you have great influence on the overall result, you can by selecting correct combination of physical cubes. One blue cube moves the sheep for two fields, but two (as well as red) push sheep by five fields forward. And then there is the already mentioned white cube, which has universal application and can become fundamental. Breath is simply essential for racing sheep.

Match lasts about an hour, because each of the three races takes some time. But the game still has some development. Races are exciting until the end, because moving sheep depends on the roll of the dice. And so there is never anything certain, some sheep may even stay at the start until the end of the race! And even though, if there is a racer, which is already in the finish, the last sheep moves instead. It provides entertainment even in two players and also in greater numbers, although a greater number is about smaller level of control.

But what truly deserves praise is processing. We are not talking so much about beautiful action sheep figures themselves, but about illustrations of various nationalities. Few would defend smile on their face, when they see cards. And not only for the first time. In addition, all sheep are named after sheep cheese coming from this country. 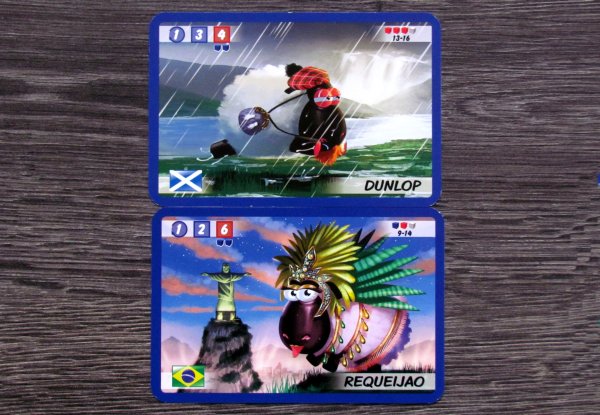 The Sheep Race is a racing game with a perfect tip-offs. It is remotely similar to Camel Up (review), but we like this one a magnitude more. It is a bit more challenging, less dependent on luck, but mostly offers an amazing experience. In addition to the aforementioned luck, there is not really anything bad, that can be said about this game. The rules are simple and breath is cleverly and originally use. The Sheep Race is unjustly neglected game, which really deserves some attention.

+ beautiful illustrations and humorous names
+ figurines
+ interesting principle of breath
+ betting
+ you can partially affect outcome of the race
+ chance to exhaust sheep from the race
+ three rounds, three competitions

- selection of sheep is decided by dice

The Sheep Race is an excellent game, that puts thsi time sheep on the start of the race. They are really cute, but especially are not born racers. This corresponds to their lack of breath, that is crucial in all three races. Up to the end of the third, we do not know the player, who best matched the results. The combat for first three places is decided also by dice, but only partially, because players have the option to choose, how the sheep will use their breath. Overall, the game is great fun and is truly precisely processed. The Sheep Race is an excellent choice for those, who would like to enjoy a lighter racing game with guessing the result. No need to make fuss about it, we really love this game!