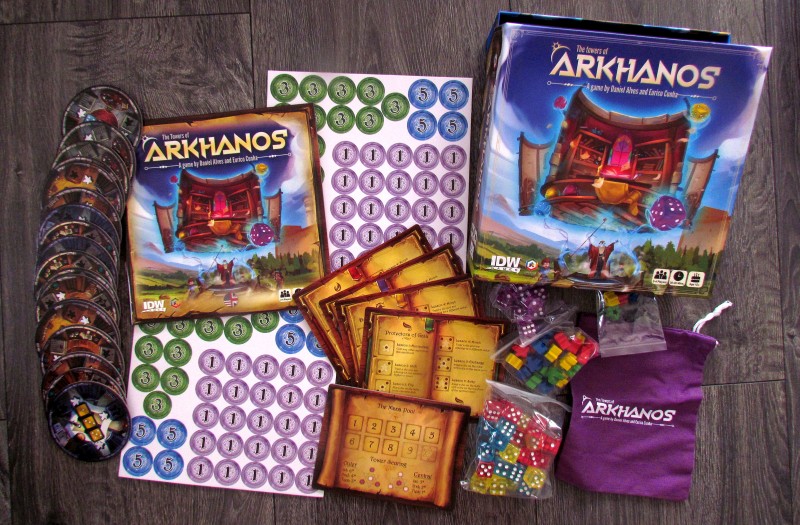 Even last year, these stones were completely lifeless. But all it took was to speak the right words and suddenly, this place is full of energy. Whole families of magicians come here to explore and try to use a place, that is one of the last to offer source of ancient magic. No one, who means anything in the world of wizards, can miss it!

We were brought to the Towers of Akrhanos and it tells exactly story about these magical fights and the construction of magical buildings. It is a game produced by IDW Games and its designers are Daniel Alves and Eurico Cunha. Game has successfully passed the Kickstarter test in 2018 and is now coming to the shelves in Europe thanks to Esdevium Games.

On the lid, we see a flying house and inside a not very large box are hidden four magic books and one board of dice supplies. They are the main component and there are forty of them, ten pieces of each color. However, round floor tiles enter the preparation of the game – there are four starting tiles, which create the starting shape of triangle. The rest of the floor tiles create a supply aside. Players then each  take one magic book and pawns of one color. All dice begin game in a canvas bag, while the prestige tokens and floor stock lie aside. 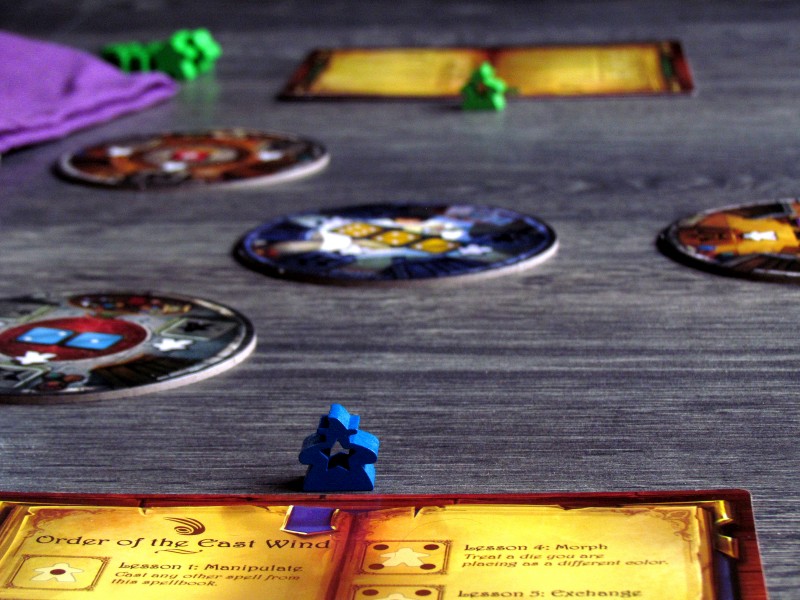 Games are divided into individual rounds. At the beginning of each of them, the starting player (this role changes with every round) will draw a set of dice and roll them. One after the other, players choose and place dice in free positions on the floors. But by doing so, they must meet conditions written in the middle. Together with the dice, the player also places his pawn next to the dice.

Each position offers specific bonus, which can bring not only prestige points, chance to use a pawn instead of a dice, but above all the ability to activate magic. Which, in particular, is determined by the value of the dice used, and the player in the appropriate place on his spell book must place his pawn. At any time in his subsequent turns, he can activate this spell. Lines allow players to manipulate the value of the dice used, and you can only pay for that with figure on the spell book. 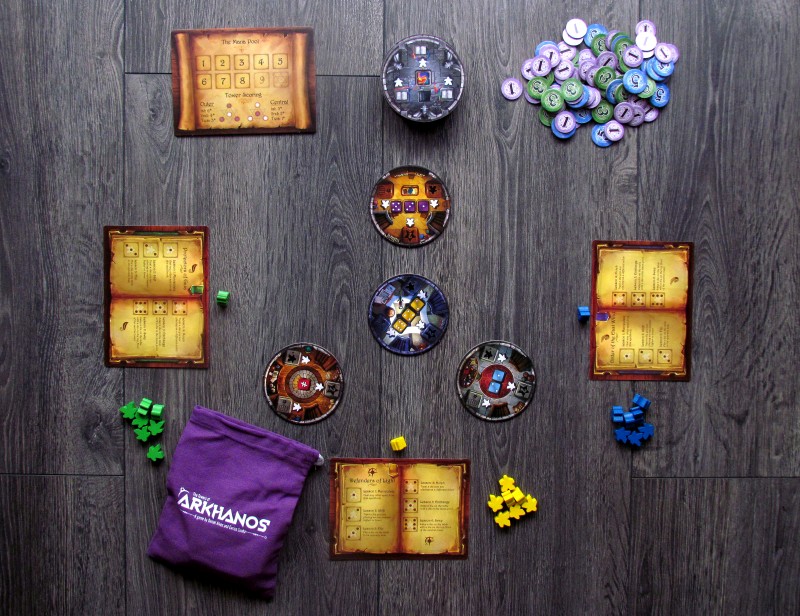 At the end of each turn, a player can score an entire floor, if he has completed it by placing the dice. Players score the whole surface according to majority and presence of their own characters. They can then take them back together with prestige points.

The next round follows, in which the starting player becomes the next player in clockwise order. He again takes the dice, rolls them and gradually all the participants get to place new dice. Thus, the game is constantly changing and the towers grow in height.

Each round is completed by placing the last dice on the mana stock, which serves as a counter. After the prescribed number of rounds, the game ends, but it is still necessary to score unfinished floors and pawns on magic books. Then the player, who got the most prestige, wins. 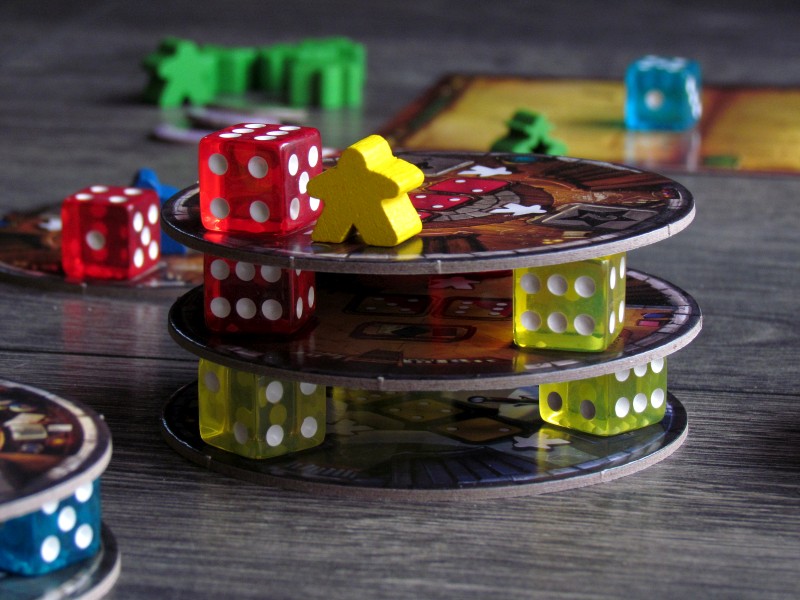 The Towers of Arkhanos is a new attempt to link dice rolls and building. Again, this is a simple dice placement game, ie placing dice according to their values. The dice, but also the order of the players, decide the possibilities of a single turn. This varies with each round, which also differentiates the player’s chances.

The game has simple content and rules. You only need to remember the special effects of each field. The whole course makes the game great fun for beginners, but indeed all dice lovers will find their own things to love in there.

Unfortunately, the main problem is always the setup, which is same. There is nothing to differentiate starting turns between matches. It is only gradually, that the floorboards get into the game in a different order, but that is not enough. After a few games, the game starts to get repetitive. 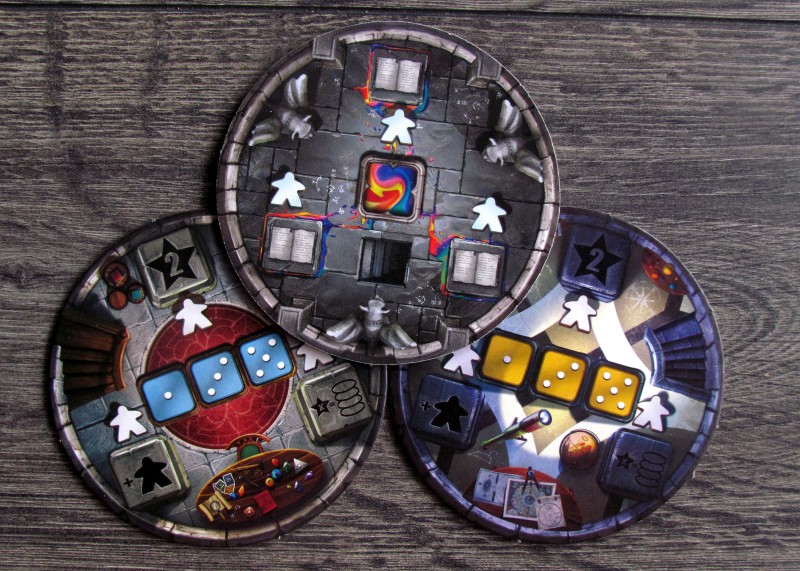 And that’s a shame. Placing the figures and especially manipulating the dice is very well thought out and above all its fun. The game will win your attention and you will enjoy the battles. In addition, contest for places is also interesting in two, when each player places two dice instead of one. But even in four, you don’t have to worry about any unnecessary waiting. Games are really pretty fast, because the individual rounds do not last long. Each player places only one dice and possibly performs some related actions and it all moves on.

Bound with the focus on beginners, it is an excellent decision to let players build up. This always improves the overall impression of such games. Indeed, the actual processing is really good and there is nothing to criticize. The rules are also clearly structured. 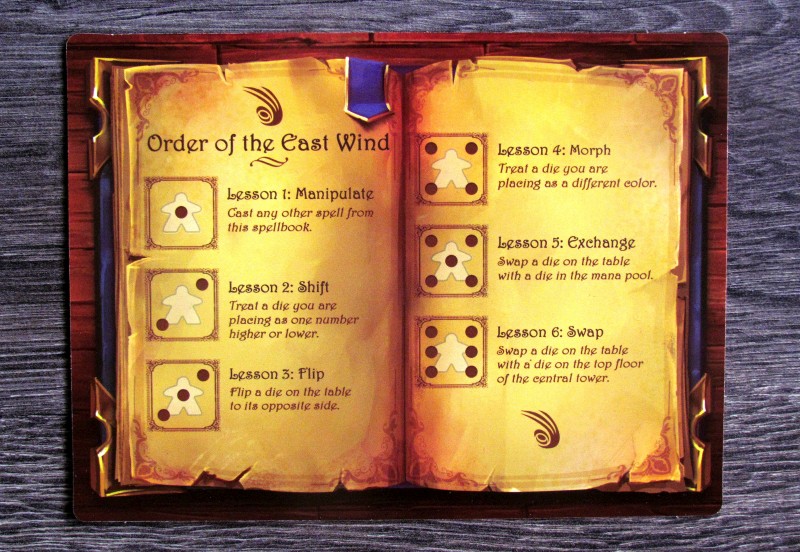 The Towers of Arkhanos should appeal beginners, who will easily grow to love this novelty. Gameplay is very fast and everyone feels involved in the construction. Players in the middle form multi-storey buildings and place dice. The whole game nicely changes mainly with the action abilities of each space. But even these will not improve the lagging replayability. Despite this problem, The Towers of Arkhanos is good entertainment.

by Dušan on 07. 08. 2019
We thought gold was ours. We rejoiced foolishly and did not watch the sea. None of us saw, when the surface began to boil and tentacles began to flicker [...]

Review: Honga – everyone is afraid of tiger

by Dušan on 29. 07. 2019
When everything goes as it should, you don’t even know, that he is roaming around the village. Only occasionally will some animal disappears from the [...]
Comments
Leave a reply