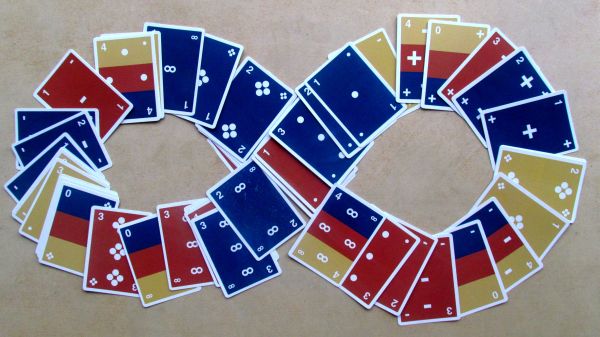 I’m sure you’ve heard many times, that circles in crops were found somewhere in the countryside. Strange geometric shapes, that are regular and extend several meters in diameter. The tips of seedlings are scorched by indescribable heat. One farmer in America found such symbols on his field in 2012 and a strange package lay in the midst of one of them.

Although it should immediately report it, he kept it for himself and full of tension unwrapped it at home. Inside was a deck of cards printed with different symbols. Their meaning is yet not fully understood by people, but we already know, that they can be played as a card game! It’s all thanks to the company Zontco LLC, which received a package from farmers and brings it to us for our lusty playing tables.

A cult of thoughtful entertainment began to emerge around the deck already. And despite the fact, that entire game is hidden in just 55 cards, that could from a very distant view look like classic numerical cards. But there are five suits here instead of classic four. Eleven cards in each suit, but you will be surprised also within individual packages. They are set apart with different background. 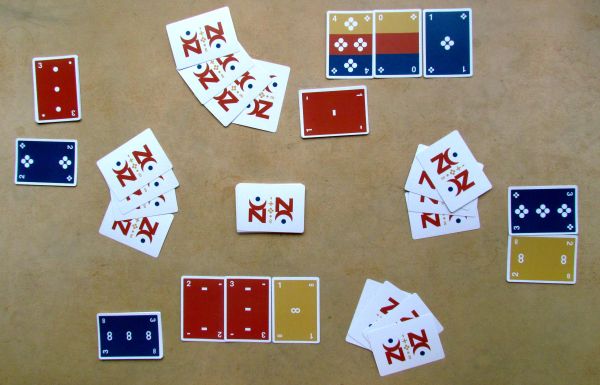 Within each of these sets, all three colors can be found (red, blue and gold). At the same time, minimal number in each suit is zero, maximum is four. At the same time, symbols for sets are not the same as we used to. There are plus, minus, infinity, and four dots.

You can play different games with Zont deck. Basic rules we have received contain three. They are called Ten, Key and Bazaar, and we will gradually tell you, how to play each and what we think of them.

At the beginning of the game, someone takes the entire deck of cards and shuffles it mercilessly. He must now deal to rivals including himself five cards with which everything starts. Remaining cards form the drawing deck.Together players will try to work through the whole deck and get the most points along the way. 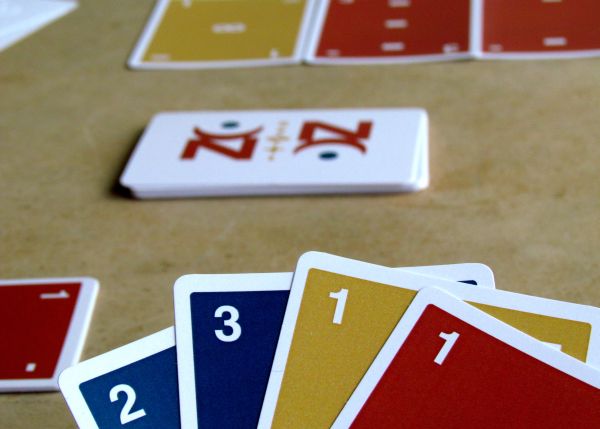 In his turn, player always simply plays one of the five cards and adds it to his own line on the table. He then draws back five cards and play pass to the next player in turn order. Sum of numbers is most important on cards lying on the table. As soon as one player reaches ten points, all players must move their played cards in their own scoring piles and game continues. This is all done until deck gets empty. All unscored cards, that were left on the table, give no value at the end of the game. At the moment, each of your opponents adds up points gained in his pile and winner is determined by the highest total.

The game is simple and players in it are faced with particularly strong uncertainty. Most depends on the use of special abilities of cards. It therefore is an excellent introduction to the whole deck and understanding of meaning and continuity of symbols. It is also good for playing with kids, because it has easy rules to follow. The game is very quick and you fly through fifty cards easily within fifteen minutes.

The second game in the sequence is called Key. At the beginning of the game, you must find all five zeros in the deck and put them on the table to form a cross. Each player gets five cards. Turn then consists of several stages. First you must play one card from your hand to the corresponding pile (following sets), which grows on top of those zeros. You can immediately activate the effect of the symbol on this card.

Then you can use one of cards in your hand on your scoring pile and draw back to five. Game continues until cards run out. One more round is played, followed by the final score. There is however an important twist, because value of each card is based on upper number of sets in the middle of the table! The player with highest points gain is the winner!

At first glance, Key operates at random base, but in fact, large proportion of it relies on tactics. Despite your efforts, you can be affected by luck in drawing cards. But the game is very fast. Most of the action and possibilities of it are extended by effects triggered by individual symbols. This time you’ll be able to play extra card in turn, take one back to your hand or mix one of the piles. The Great Zont (= dot) again protects card against these effects and infinity may take over any other ability. 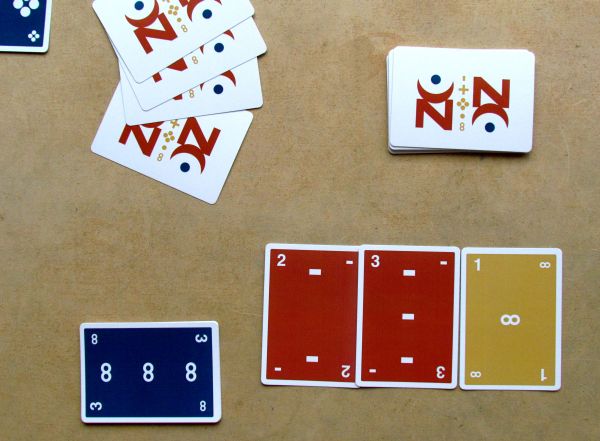 It is better to start with this game, when you already know the meanings of symbols well. It’s funny, that shuffling cards during the game can get zero on top, so if you play well, some cards may have no value at all in the end. The most important thing is to keep an overview of the cards in those piles and accordingly try to adjust scoring points in the middle. Key is a fun, yet still simple and fast card game, that makes clever use of Zont Deck.

Last of these three games is called Bazaar. The package starts by removing cards with four dots (excluding zero and fours), shuffling them and playing three visible on the table. They must be of a different color and form a Bazaar. Shuffle the remaining cards back into the deck and each player receives five cards to start with.

In his turn, you can then play one of the cards and form groups in front of you. You will group cards according to their color. Everybody is trying to be the first to reach number of cards, indicated by the card in the middle. Playing a card of course triggers its effect, if you choose to. At the end of turn, player draws back to five.

Round ends, when someone manages to collect all three sets with the corresponding number of cards. Player is awards points for his cards. If he has exceeded the prescribed number, then he must detract extra cards. Once drawing deck runs out of cards, game ends and player with the highest score wins.

Bazaar is in our opinion weakest of the three games. We did not enjoy it that much. While its not entirely wrong and boring, its course is not as fast and smooth as with the other two games. It offers interesting strategies and capabilities of symbols are similar to other games. In addition, it lacks a better description of the rules and scoring. And it is also not clear precisely how many cards should player get into their hand at start of the game (its five, naturally).

The downside of all three games is, that they are limited to two or three players and four cannot play them . It’s not a tragedy, because there is not so much card games for a smaller number of players and we are certain, there will be more games in the future, that will open it as a wider audience entertainment.

Overall, however, The Deck Zont is very interesting and entertaining act, that has the potential to stand firmly beside Decktet (review) on the podium of open card schemes. We look forward to trying out other games for this deck, that are currently in development.

PS: You can try by yourselves games, that were competing during January and February 2014 for inclusion in the original rules of Zont Deck. They can be found here: http://www.boardgamegeek.com/geeklist/167662?commentid=4391942

- Bazaar is not as good as the other two games