Review: Thunder Alley – loud as thunder and fast as a lightning 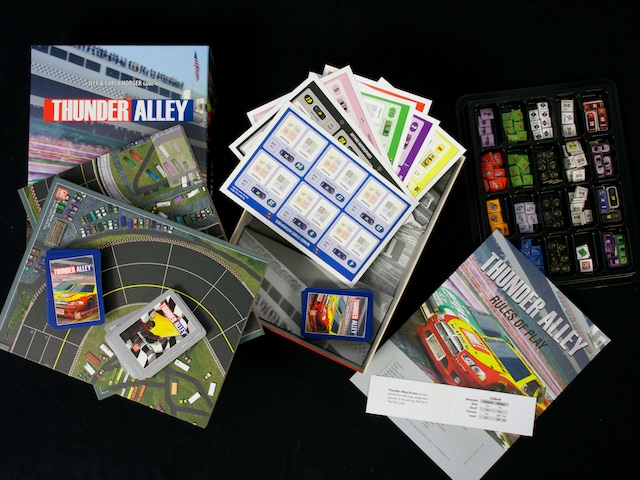 Company is GMT carved in stone altars for all the players, who revel tokeney simulations of war. But it is also true, that they from time to time publish game, that does not fit into their usual portfolio. We can name a sophisticated eurogame presenting evolution of species called Dominant Species or almost party racing card game Formula Motor Racing. And GMT returned to racing theme recently, namely Jeff and Carla Horger.

Questionnaire in hand and we can cross it item by item. Is it based on reality? YES. Game tries to simulate Nascar. Are there tokens? YES. Two sheets of tokens showing damage to the car in the race and more. And of course, the very cars that are also printed on cardboard. No miniatures. Is it card controlled game (favourite mechanic of GMT)? YES. You will find over a hundred cards in the game, you drive the race using them and your success will be affected by random events. Paper map? NO. Fortunately, you get two very well-made solid game boards instead, which are also reversible. This allows you to circle on four racetracks: in Tenerife, Los Angeles, Glassboro or Columbus. Each track provides a slightly different gaming experience. Complicated rules? NO. And we stop here for a moment.

You will always somehow subconsciously be waiting some overcombined complicated rules from GTM, that will try to faithfully simulate reality in manic details. Sure, this company repeatedly proved, that it specializes solely on heavy war games. And player expect this attention to detail from these games after all. Thunder Alley certainly has a sense of detail, but on the other hand, it does not address and does not burden with for example cornering, overtaking, driving in the air bag, effect of weather and other. Whole game mechanics could be summed up into “have goods cards, play cards.” 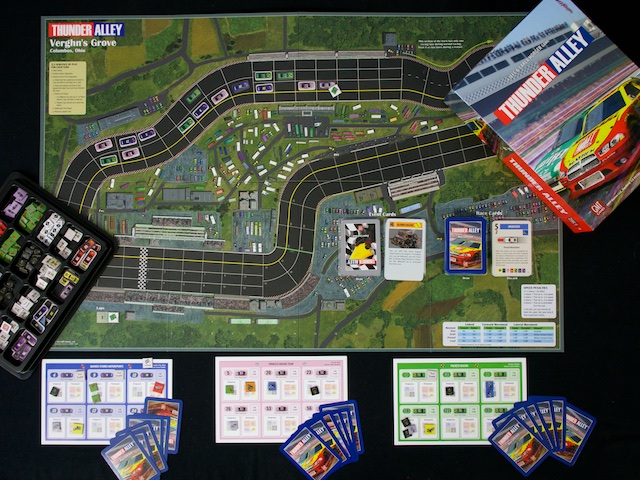 And here again, we should focus on what we just said. Game cards are beating heart of Thunder Alley and deserve more attention. At the beginning of the game round, you will get as many cards as you have race cars plus one. Players then take turns, always activate one of their cars and play a card, that defines maneuver the car performs. Stronger cards that will allow racer to travel more fields usually causes some damage. In other words, if you step hard on the gas, you lose some rubber to the asphalt, so you have to take counter of tire damage. Some defects can later be repaired and some are irreversible, but it is important that damage is cumulative and may mean end of the car’s life in race. But back to playing cards.

Maneuver on the card (with the exception of basic movement) always means that you move away not only your chosen car, but likely also opponent vehicles. Often even the whole range moves forward. This results in a constantly changing situation. Your goal is to be first at the finish line, but overall maintain a good location for all your cars in the race. Each point is scored, so simply tearing the finish line does not assure victory. You have to operate with all cars in your colors and literally push them forward. Fundamental importance is planning and timing cards and order, in which cars are activated. Your goal is to keep with the pack, so your car is moving also in rounds of rivals, but at the same time trying to get into advantageous positions. If you make a mistake and time cards badly, it can very easily backfire at a time, when a strong card is wasted without any benefit and maneuvers will not have the desired effect. 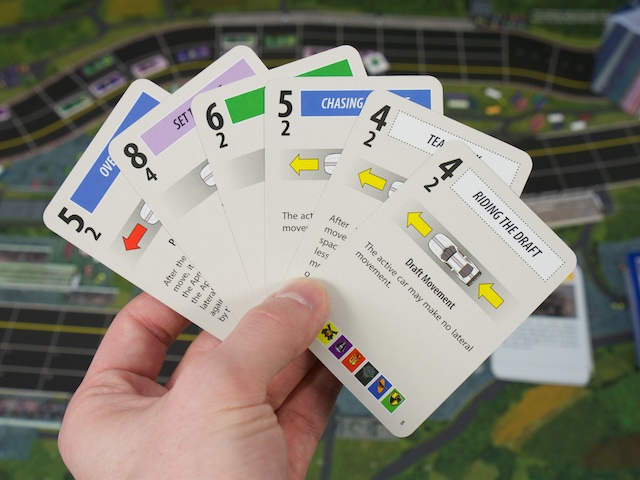 The game overall belongs among easier ones, although understanding some maneuvers on the cards can give you a hard time. But as soon as you have one lap completed, everything goes into your blood and you can start planning, without thinking of the basics. It is a bit of a double-edged weapon, because on one hand you have to make the most of cards, but on the other hand, situation on the board changes dramatically and you have to react flexibly to changes. If someone is a thoughtful player, he can demolish atmosphere of hectic race up to the freezing point and this is undesirable in a racing game.

At the end of the round, players have usually chance to go to pits and repair their cars – but it leads to a loss of positions in the race. It may also happen that race will be completely restarted and even cars, that fell far behind on the track get a chance to take the lead again. All these events are again controlled by the cards that are revealed after all players have activated all their cars. Text on these cards is often complicated. 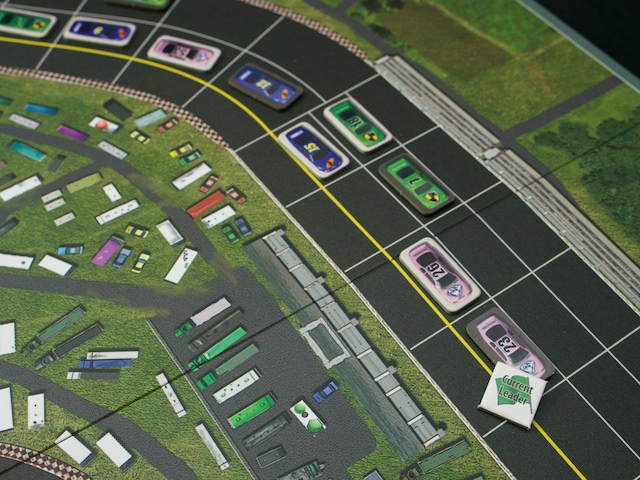 Big advantage of Thunder Alley is a range of players starting on two and going up to seven. And good news everyone: adrenaline racing it is with any number! Best way to enjoy it are 3-4-5 players, but with any number of players it is the even other combinations of players does not significantly detract playability. Surprisingly big impact on game itself have racing circuits. Short ovals are a place to wage fierce competition in overtaking and attempt to eliminate opponents by giving them one full round. In contrast, more complicated tracks full of turns are filled with positional battles and tactical decisions.

Game time usually varies between 1.5 to 2 hours. Although there is no dice in the game, there is very noticeable influence of luck. Bad cards in hand can affect your placement in the race. Each card has a specific use, and sometimes it happens, that you encounter card that fits into exactly the opposite situation, than you are currently in. You also get very often into a situation, where all the cards you have on hand result into damaging the car. It is therefore clear that sooner or later, you will end up basically involuntarily in the parking strip. But Thunder Alley will not let you stay there for long as i tis a truly dynamic game.

Thunder Alley will delight all gamers, who have a relationship to Nascar races or racing in general. But we dare say, that it will entertain most other gamers as well. Overall, it is a relatively simple and accessible game, which can be also a negative for some more demanding players. If you expect firmly anchored strategy in racing environment, you may be disappointed. Also, if you get easily angry on fickleness of luck, you should rather reach for another game. But if you are looking for an alternative to Formula D, which can sometimes disproportionately stretch, this is definitely a tip for an interesting alternative. At the same time you get a game, where you have to make a series of decisions and think a little, which is your way to victory.