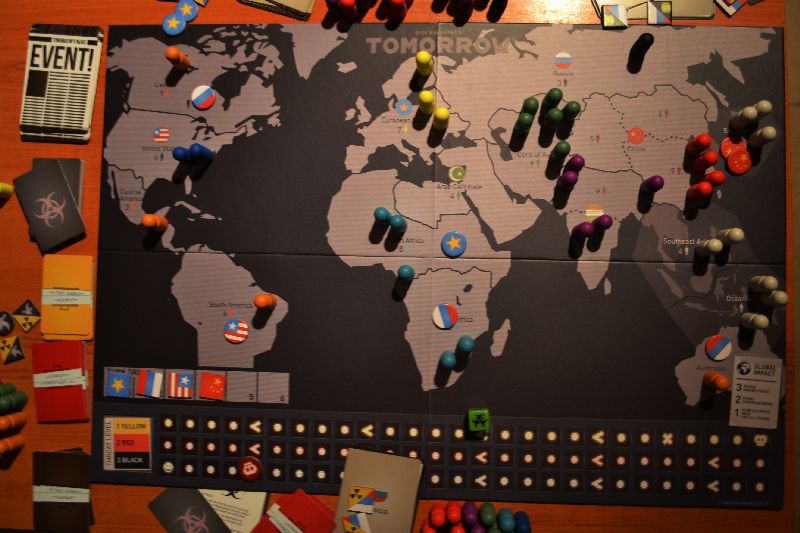 What could it be to save the world? Some answers to this question will be provided by game Tomorrow. It simulates not only aforementioned degradation of the human population, but also, and especially, political struggle in the background.

As you well know, there is not only one major power, but several in the world. Each player in this game takes on the role of one of the powerful states (USA, Russia, China, the European Union, the Arab Emirates and India) and using the right choices, he will try not only to reduce human population of his rivals, but also to get strongest influence on the political scene for himself.

And who is behind this original act? Firstly, it is author Dirk Knemeyer, which was helped with illustrations by Heiko Grünther and Sigrid Knemeyer. The game was submitted to Conquistador Games, Inc. and if it was not for willingness of people on Kickstarter, this project would not become reality.

First thing you will notice about box with contrasting black and white are two symbols depicting biological and nuclear threat. After lifting the lid, you encounter primarily gaming board, on which is map of the world along with dead counter.

Line of tokens has to be cracked from their place. Each nation has armies tokens there, together with nuclear weapons, other for determining playing order and eventually another ones for cyber protection. Even from punching out these items, you will know, that the game is playable by six super powers (= players) and each of them will have a slightly different number of armies and nuclear weapons at his disposal. 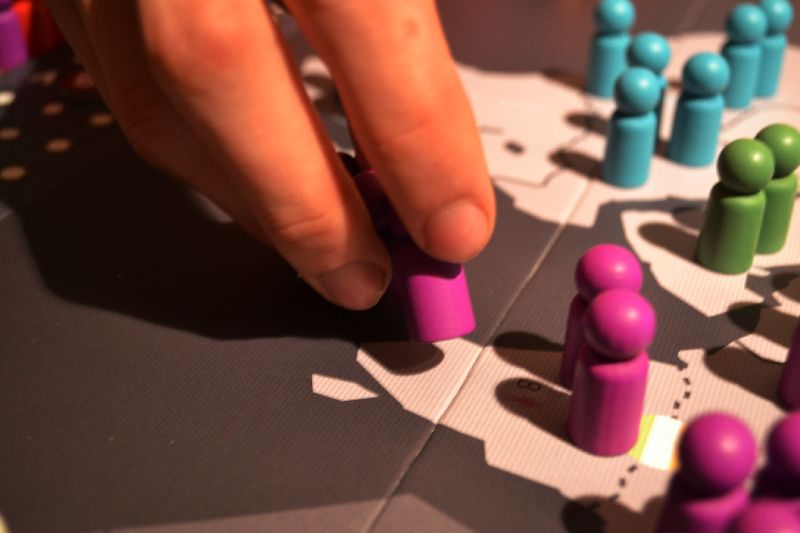 For each country, there are also five action cards and one card with special ability. As for the cards, there are still major event cards with a nice back side simulating a newspaper. Last but not least are card of diseases and strategic cards in three different colors, which come as smallest in size.

And we can fill entire game map with the most important thing, that are people represented by pile of wooden figures in eight different colors.

When you already know the content, we can slowly shed our main goal, but first, each player must choose which superpowers will he play for. These are vastly different and each offers a unique game experience. Immediately after the selection, player receives a special card, all tokens of his power and three cards.

Game board is filled with prescribed number of pieces, counter of kills can be placed on space with a cross, strategic cards are divided into three groups according to color and eventually one of the players turns the event card and reads it. The game can begin!

Tomorrow is mainly about deduction. As a brass powers, you must guess, what the others are planning and if, by any chance, someone decided to go against you or your people. Because, if you want to succeed and win, your people have to survive. Then, there are other aspects of scoring, which include killing of all people without distinction and bonus points for strategic cards. But the main point is fighting for survival of your people. But this is not so simple.

To namely ever got to the final scoring, players must collectively reduce state’s population by a predetermined number and believe, that you do not kill your own. The game is thus producing a very special and original experience, which is on one side cooperative, because as already mentioned, if you fail to sufficiently reduce population in nine rounds, nobody wins. On the other hand, each player tries to be just the best and this can be achieved mainly by protecting his people. And how will he do it? 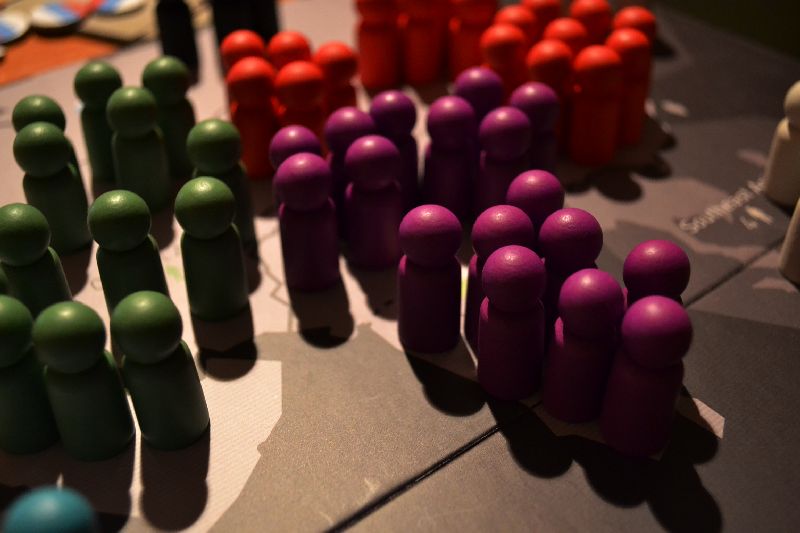 Game is played over nine rounds, where in each of them, player’s have to first read event corresponding to the current state of the population and then players suddenly and secretly plan two out of five actions. This is then executed one after another on the game plan. Let’s take a close look at the available actions.

First and probably the most common is spread of disease. Then, when this card is revealed, active player can choose between two options. Either he draws two new cards and diseases or decides to use them to spread dangerous diseases, reduce the state’s population and thus approach closer to his goal. Once he chooses the first option, no one can block him. But only, when second option is chosen, the real fun begins.

Player secretly puts one of his cards diseases and ask other players, if someone wants to block his action. Anyone from the players, who has blocking card among his orders, may decide to cancel the event of disease spreading. Players might also ask him, whether disease will be directed towards their nation. Active player may lie or not.

In any case, if this event is not blocked, player now marks place on the map, where biological weapon (disease) has exploded and reveals disease card. According to the guidelines, he subsequently removes appropriate pieces from the board. But it does not stop there. Just like illness in the real world, even this one may spread. 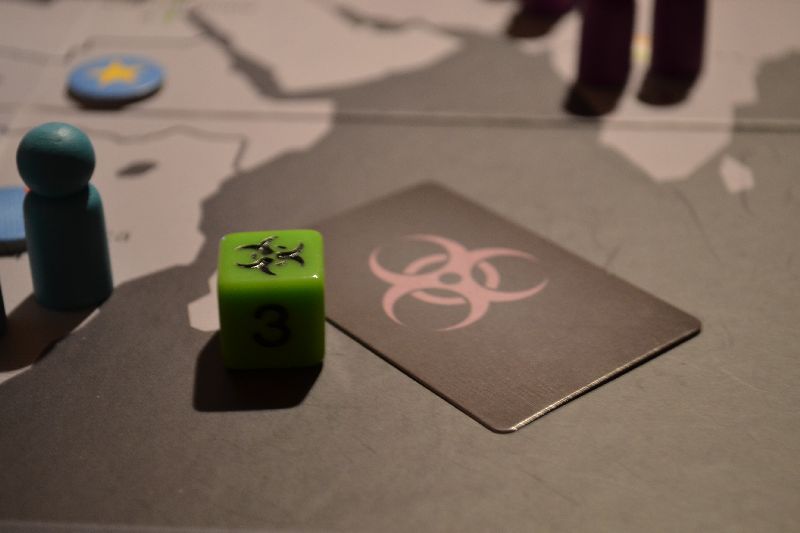 This action is the main pulling force for all players to meet a common goal. Figures have different value, so if you kill a Russian citizen, state population is reduced more, than for an African. This implies, that even though neutral nations are present in the game, they will often become targets of other players, which is the right gameplay spice.

Other action, that can be scheduled, is blocking. In addition to the above-described blocking of biological threats from other players, owner of this card can also block special skill of UAE or even other blocking cards. So blocking cards can interfere with each other… Interesting stuff. It is this mechanism, that creates unforseeable moments and alliances.

Third action focuses on the military. It works as the classic territory control. A player, who has played this action, may use any number of his army tokens and occupy neutral territory. This will gain him points for surviving in this area in the end and every time, when state’s population is reduced to a certain level, player gets as many strategic cards, as is he occupying territories.

Battles therefore usually take place just, when state’s population is on the ledge. Advantage goes in the favor of occupying player, since attacing player needs to use one more token, if he wants to win. This action card can also be used as a military support, which is another reason for alliances.

Penultimate action is control of cyber world. Whoever owns cyberspace, can better manipulate strategic cards or, for example, determine order of players. After revealing this action, active player must specify one of the keys, he thinks is protecting current owner of cyberspace. If he is right, he gets this card and resulting benefits. 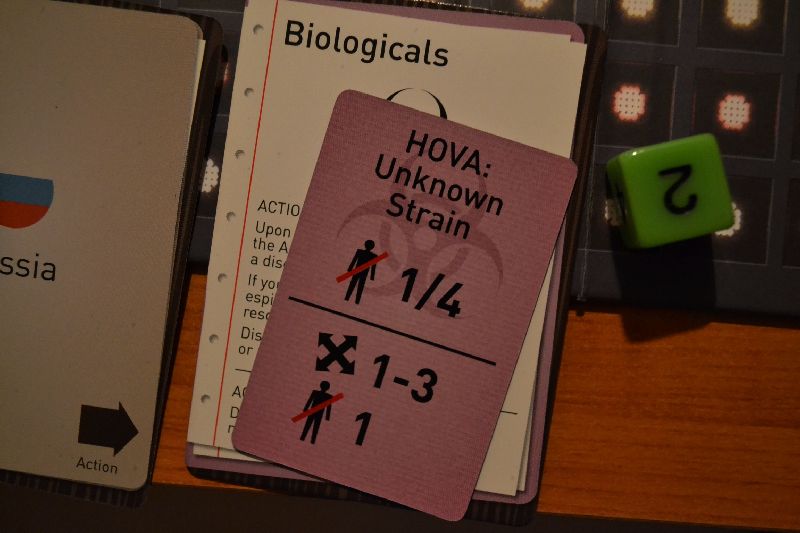 Last available action is atomic bomb. In this game, this is a purely negative weapon for all. Instead of reducing the population, namely the marker moves in the opposite direction, which means, that players have destroyed natural reproduction and that’s too bad. Acting player gets three points for using nuclear weapons at the end of the game, but so is target of a nuclear attack. This event serves as a means of threatening and makes game highly entertaining and again very unpredictable.

Once actions are planned, player who plays for European Union or whoever is in control of cyberspace decides order, in which nations will be revealing their actions. After nine rounds, everything comes to token counting of the population at the destination. It’s game over. In the event, that fundamental objective (sweeping a certain number of people) was met, players count their survivors and eventually points for cards. Whoever has most points becomes superpower of tomorrow.

Tomorrow brings to us nice semi-cooperative theme, which often forces player’s to take suicidal actions. For example, when a player knows, that he is winning, but the main goal is still far away from everybody’s grasp, he often resorts to murdering his own people. Only then, when main goal is completed, he could cherish his chance for victory.

As in other diplomatic games, who deals best with others has closer to victory. In addition, Tomorrow is sufficiently complex, that players have to strategize, adapt to current actions and happenings on the board. 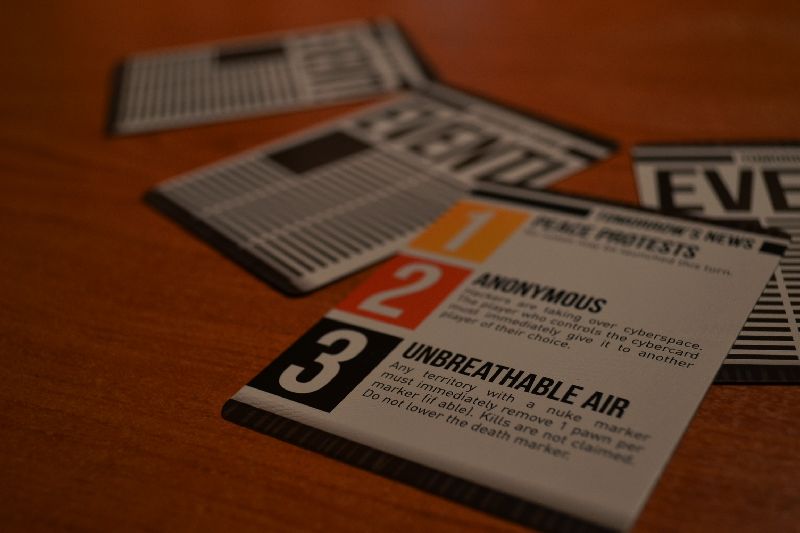 And six unique powers of the game employs an amazing experience, where each player behaves differently for different nations, but consciously making similar decisions, as if he was truly there. Thanks to this, the game is despite its quite inflexible nature sufficiently variable and always entertaining. Replayability is helped by various events and strategic card.

The main reason, why the game is so much fun, is the way the game is seamlessly forcing players to interact, negotiate, sign contracts and betray each other. There is thus no shortage of very interesting situations, where a player plays for China soon ransacked the whole of Europe and then drew a card with a peace treaty.

Tomorrow, however, also has not to be taken as strategic or war game. Altogether, it is a straightforward and linear action, which is very tweaked by interaction between players. 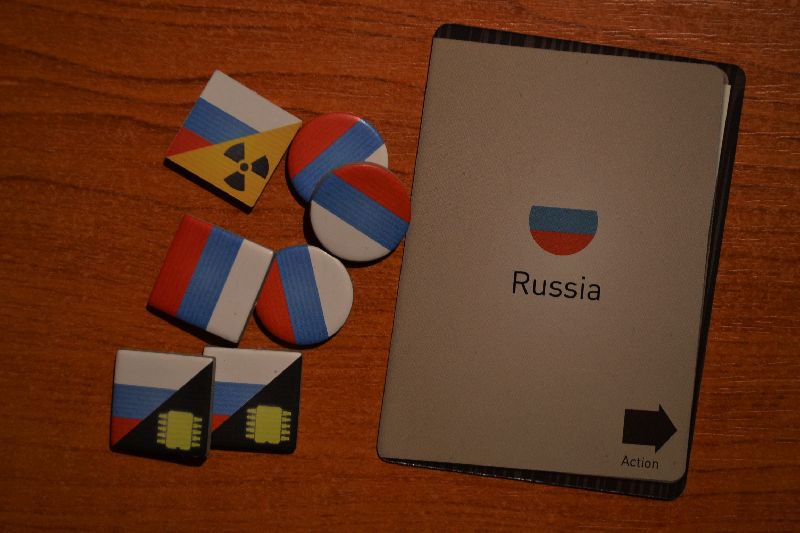 Biggest drawback is hidden in number of players. Minimum number of players is set to four and this makes it hard to get on table. And we are not even talking about finding right people for this topic. And even four are not enough to enjoy it properly. But with five players and especially with six, this is already are perfect entertainment. As far as game time goes, you can count with an hour or so, which is quite a performance for game of this caliber and depth.

- a controversial theme
- some number of players
- somewhat linear

Tomorrow offers a controversial theme of depopulation (quite needed in reality), which, however, is encapsulated in political struggle for domination. Just like in the real world, it will be decided by diplomacy in the first place as well as various agreements between players. But many of them lead to betrayal. Communication between players and amazing idea of cooperation, without which there is no winner, makes this game amazing and unforgettable experience, that should not be missed by any enthusiast of conflict games.