Review: Treasures of Cibola – a city of gold

by Dušan on 01. 05. 2020
0
previous article
Review: Dungeon Degenerates Hand of Doom - doom for all gourmets
next article
Review: Sternsucher - search for glowing dots in the sky
Contents 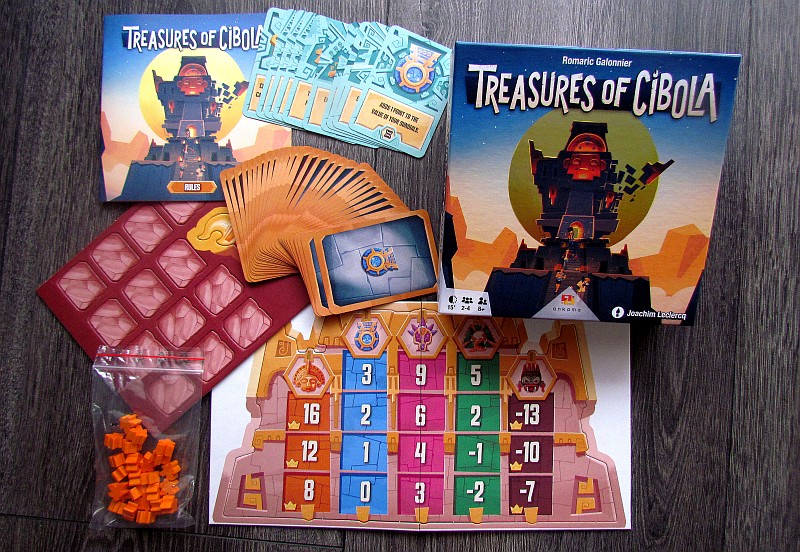 When we first opened its gates, we did not believe our eyes. Where we looked, there was everything in gold. Many of my colleagues ran and began to fill their bags and backpacks with heavy golden pieces. Only me and a few others kept our cool. Where gold is ordinary, there must be even greater and more valuable treasures!

And all players will fight for treasures in this game, which was named Treasures of Cibola. We should thank the designer Romaric Gallonnier for its creation. He entrusted the game with illustrations by Joachim Leclercq and Anakama with its release. The distribution is then handled by Esdevium Games.

On the lid, players see a hint of possible treasures that all hide in a small box. From that player draws treasure cards and Roman numerals one and two on the back. Shuffle each separately and set aside. They pick five randomly from the dozen totem cards and spread them to the center of the table. The players themselves receive each set of scout pieces. They place the temple board in the middle and a pool of stone tiles beside it. The starting player is determined in an interesting way: by throwing the torch. Whoever it points at, that player will start the game. 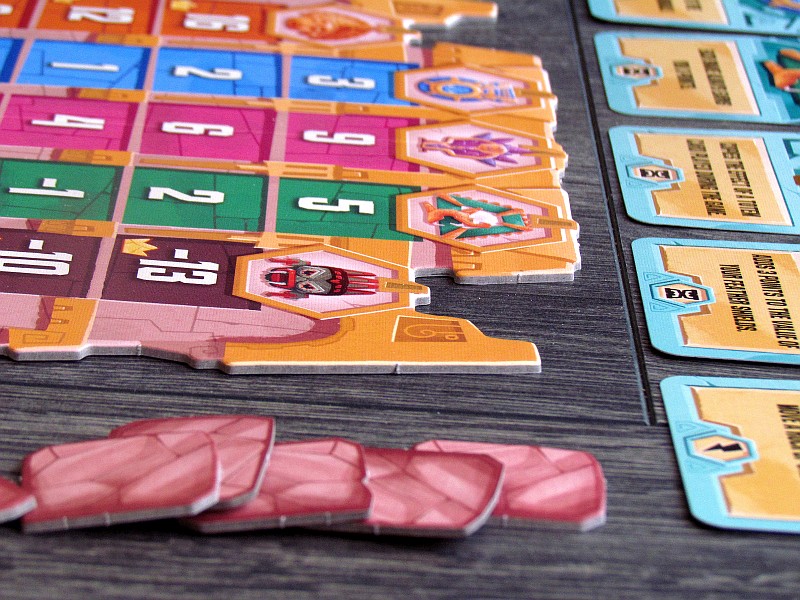 At the beginning of each round, players reveal four treasure cards to be fought for from the lowest Roman numeral deck. Then all participants secretly pick up any number of scouts, they want to sacrifice for that round and together reveal their bets at the same time. Whoever puts the most explorers into the round gets a chance to start the exploration phase and take one of the cards on offer for himself.

Some treasures have a symbol at the top in addition to main illustration. If a player takes a stone card, he has the honor of covering one square in any column with the aid of a cardboard tile on the common board of the temple, thereby covering up the value numbers. On the other hand, the blue circle symbol means a chance to win one of the totems offered. All players get their chance in order of their bet to get one card. The explorer figures are all lost.

The player has the chance to offer an empty hand, when betting. That’s because there is a limited number of pieces for the whole game. And if anyone dares to reach out an empty hand in the round, he can take as a reward all the pieces, that were discarded from past rounds and are still in the middle. 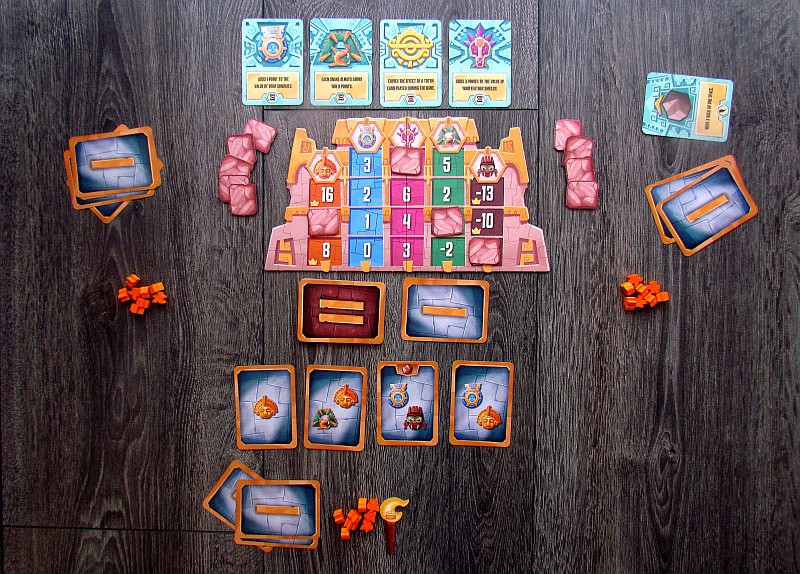 Players continue with their turns, collect treasures, and hide more and more slides down the ceiling of the temple. However, it is not possible to hide the last value in any of the columns, because it also corresponds to the point value of the artifact to which the column belongs.

The game ends, when all the treasure cards are out of stock, not only in a stack with the Roman number one, but also with the number two. Only now can everyone find out, how valuable treasures they have actually captured. In fact, only one numerical value remains visible in each column, which corresponds to points per symbol. In addition, there are gold silhouettes in the game, for which only those, who have most of them, score points. Conversely, skulls take away their points from their most diligent collector. Whoever then accumulates the most points in total, celebrates victory.

Treasures of Cibola is a clear attempt to bring something new and a little different to the genre of simple game about collecting sets. There is always a sufficient number of cards to choose from, but it is all about trying to get into play as soon as possible. 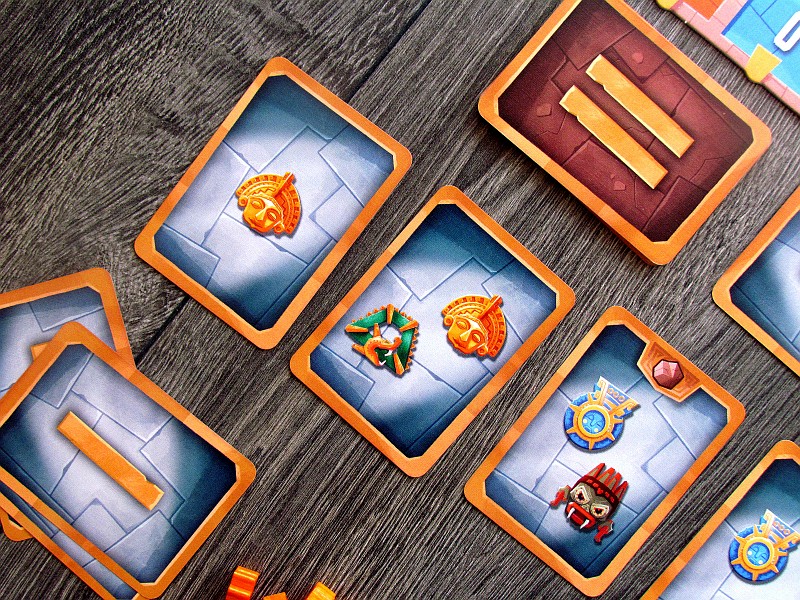 To do this, however, players must sacrifice their valuable scout pieces. They seem to have only a limited number of them, because once they bet, they will lose them all regardless of the final ranking in the round. Fortunately, they have a clever and tactical way to get some of them back into ownership. Just let others lead at the right moment and voluntarily take the last position in the round. Sometimes it works out perfectly, sometimes you have to share the profit with an opponent who also offered an empty hand.

In the first part deck (deck number one) of the game, there are not so many cards with stones, so players have a chance to refine their tactics a little and decide, what treasures they would like to collect. Only then the fight for true point positions begins, where players try to build up space with each other and harm their opponents. The collected cards are public. 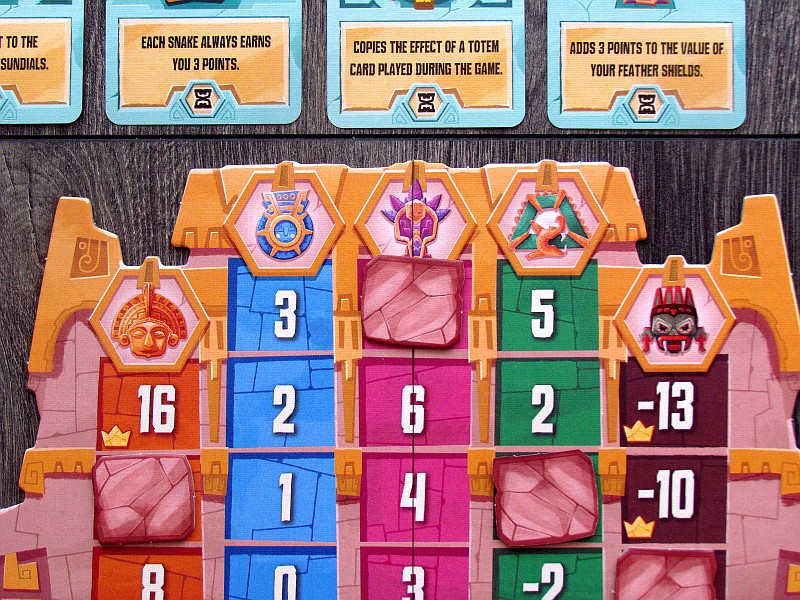 The game is first and foremost beautifully dynamic and fast. Players choose one card after another, the collection grows rapidly and suddenly everyone concentrates on maximizing their point gain. And after fifteen minutes, it’s over. Of course, this is related to simplicity. In doing so, individual treasures have their own rules, which alone require some memory.

But then there are totem cards, which usually give their owners a one-time option. So you can deal with skulls or adjust your point gains. There are ten cards to choose from, and they should at least make the games different. However, this is resolved by the fact, that players overlap different values and collect other symbols. And especially there is not even such a demand for variability, given the time of the game to complete is nice thirty minutes. 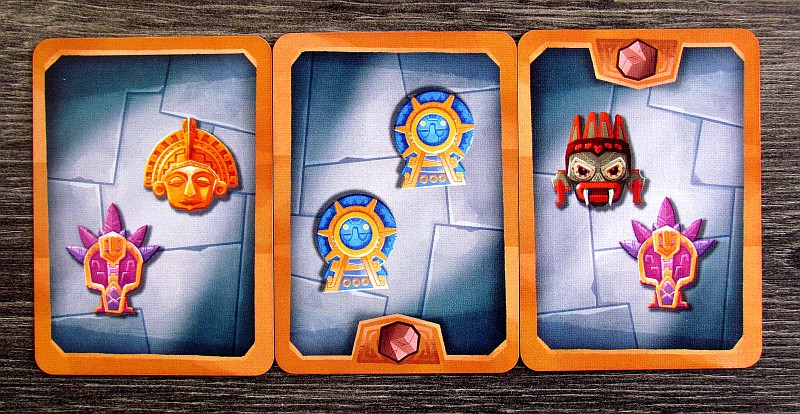 The game offers a variant for two or three players, but its best in full number. Only then does the last player in the round feel, what it is like to have a card left that no one else wants. It is in this rivalry for cards and then for figures, where hilarious fun is hidden, as it excels mainly with greater competition.

Treasures of Cibola is a game that has style. It looks nice and also plays well. In fact, it does everything well in terms of mechanisms, although there may be coincidence in the form of bidding. There you never know, how much to put in front of you to get the card you want. Treasures of Cibola is a great light entertainment, that works perfectly as a filler.

Treasures of Cibola is an entertaining game. In the form of a mysterious treasure-filled city, you get a chance to bid for your turn position, which then allows you to get a better card. And thereby collect more successful sets. And in addition to this, the card decides whether you will have the opportunity to influence the final scoring. It's fun, it's rivalrious, and it's fast. Treasures of Cibola is a great filler.

by Dušan on 31. 10. 2018
Do you know how the universe came to be? It was necessary to arrange the stars in the most glamorous shapes and positions, so you hold your breath just [...]

by Dušan on 19. 09. 2018
Scout has arrived back to our lair and reports, that the yard is no longer a safe place. Our defensive machines are on fire with enemy eggs. Every hit and [...]

by Dušan on 30. 05. 2018
I am already fed up of all the cemeteries. Running every day among tombstones, hiding behind them and fighting the local champions. I have done this many [...]

by Dušan on 14. 05. 2018
It is a place, where you always gain your strength. The quiet and peaceful garden is a paradise for anyone, who wants to listen to nature and relax. But [...]

Review: Kingz – who has heart of a lion?

by Dušan on 11. 09. 2017
Lion is no longer our king. The spirit of a brave warrior has left us. But the animal kingdom can not remain without someone who has the last word. It [...]

Review: Krosmaster Arena Season 2 or how miniatures can change your game

by Dušan on 27. 07. 2017
We need reinforcements! Cages under the arena, where all the fighters should be, are empty apart from the biggest stars. Several other remaining residents [...]

by Dušan on 28. 06. 2017
You surely know all those gangster movies in which thieves run away from the police in a thrilling chase. But this time, on their way to success, gangs [...]
Comments
Leave a reply