by Dušan on 22. 10. 2014
0
previous article
Review: Praetor - roman battle for power and glory
next article
News: Strife Legacy of the Eternals on Kickstarter now
Contents 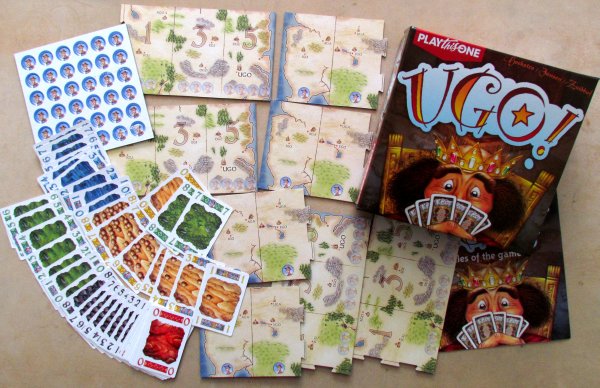 My father was a king named Rago. Already generations in our family pass one big tradition. Well it should not be called exactly a tradition as you will see. With each successor, our family name was shortened by one letter. Before Rago, there was Trago and Strago before him. I cannot remember my great-grandfather, because he died before I was born and with him also letter “s” in my name.

“And what happens, when we run out of letters?” I asked, when I was a little older. Perhaps as many children in our family before me. We were once a significant gender. But the king kept extending his territory, until he reached dark forest and captured some wizard. He destroyed the entire forest during his campaing. Bars failed to hold this mage, but this was not reason, why he got so may. He placed a curse on our whole family for burning those trees. We die letter by letter until there is nothing left of us. But before that happens, we will still be able to save our family. One of the last descendants will rise and expand an empire, where is was never before to fall again into oblivion. Can I be that man? Can I breat the curse? I can save my family..

Perhaps that farmer’s greeting, which was taken over even by the king himself, got its name also board game UGO! This game arrived to our editors office from publisher company PlayThisOne. Author of the idea is Ronald Hoekstra and it was further explored by Thomas Jansen and Patrick Zuidhof. Illustrations were done by Franz Vohwinkel and it got to common people in 2013. 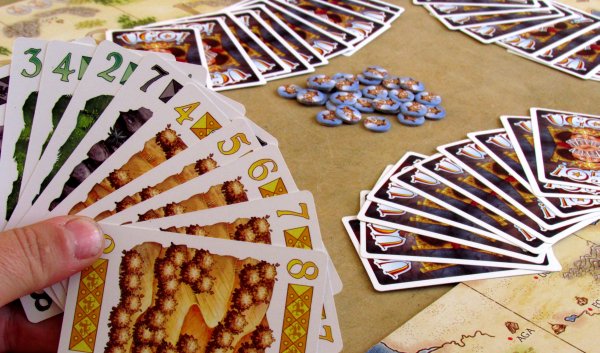 The game is hidden in a small box, which would suggest its card nature. And yes, there are definitely cards in this game, as indicated already by the king hiding behind a hand of cards on title image. His crowned head welcomes you on the cover and you can look inside on the estate. Packaging contains a total of eight cardboard pieces, from which are assembled four independent (and still exactly the same) kingdoms. All have towns, forests, rocks and are divided into five vertical sections.

Side compartments are hiding those already mentioned cards and a pile of round tokens, that represent farmers. Cards themselves works as locations on the map. Each card has its value, image and also icons of several farmers.

At the beginning of the game, each player takes two parts of his kingdom and connects them using puzzle protrusion into one elongated board. Each player gets shuffled deck of exactly ten cards, while all others are put aside. They will not be neeedd, at least for first of several games, which are necessary to determine the winner. 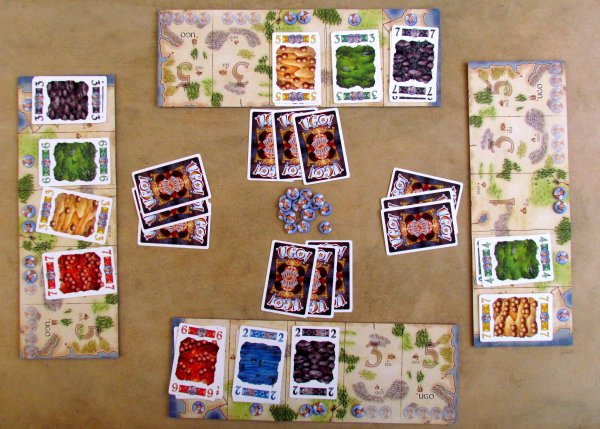 But we’re not that far, because right now, we can expect first round to come. First player starts it by playing card. All others must observe the color, if they can. The only way to play card of a different color than original one is, when a player has no card of such color. Then the actual value is important, the higher the number, the greater is chances of victory in that particular trick.

But not every round will players want to win. But often, it is not in their power, because those who play later always have advantage. That is, why each subsequent round is always started by winner of the previous one. Once winner is clear – a regent, who played the highest card – he takes all the cards and divided them by color on piles placed in his kingdom. He needs to filled them from left to right. If he already has a card of the same color, he covers them with new one.

For his victory, player gets a card corresponding to number of farmers on card, which was the decisive one. These farmers may also be obtained by playing cards with values one and two, but only if the player does not win such trick round. These tokens are assigned by players to their Kingdom board and free columns should also be filled from left to right. First two areas have already their managers placed (printed), so recruiting new workers starts in the third column. 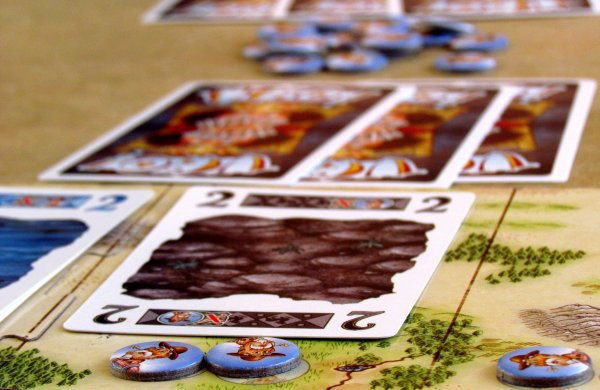 Round ends, when all players have played their last card. They get points only for top card of each color. And only in the event, that area has engouh farmers to care for it. For each missing worker in place, where a card is located, five-point penalty is waiting. Players note their sums on paper and continue with other three rounds. Only then is the total deciding about a winner.

Ugo! is not some challenging card game, when it gets to rules. It can be taught to everyone. Maybe this is, why you should be interested in it. But not many people, in our country and in the world, knows it. The more we were happy, when there was a chance to test it and share our impressions with you, our readers.

We never made no secret of the fact, that we are not lovers of trick-taking games. They all look and play a lot alike, at least that’s how we feel. Fortunately, in the case of Ugo!, this is not quite true. Actual minigames with playing cards are only part of the whole, as players must simultaneously think also aoubt colors and getting farmers. Without this, there are only minus points waiting at the end of the round and no joy. 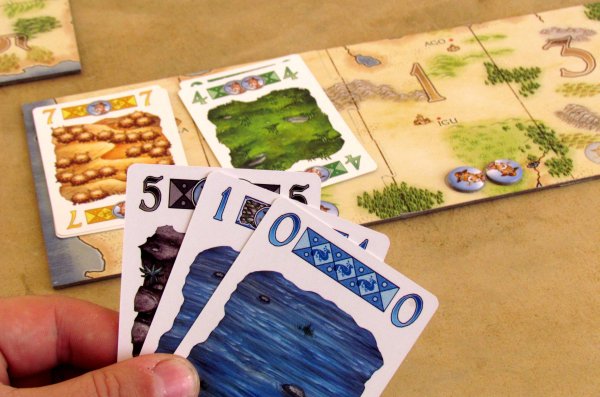 Whole course of rounds is actually no big deal. Those important cards leave your hands near the end, when you can turn their value into points. But you must be at the same time thinking about farmers during the round. And here comes the contradiction, because victory in rounds is also important.

But sometimes it helps if you do not win a trick. Low cards offer another chance to get the needed workforce. There are even zeros in every color, which act as offensive cards. Well used in the closing laps and they can completely destroy point gain of your enemy. High cards do not automatically indicate a success and vice versa. And just because of this, there is much less influence of luck on final outcome even witt random distribution of cards, than in similar games. Yes, luck remains, otherwise it would not be trick-taking card game. And especially in a lower number of players you might be unsatisfied, because it is not possible to count cards, because each round can be missing up to fifteen random cards.

Many things also depend on color distribution on game board. Players must assess cards in their hands and act accordingly. But sometimes, you simply have no choice, because colors just force you to play card you do not want to. You can not lie and not play it, even if you want to. This is not just any cheating and eventually it would all come out, because you’ll have to play that card sometimes anyways. Player have a tough job ahead, because they have to try to win with middle numbers bearing workers, but in fact with least possible number of colors in deck. Numbers on cards are important only near the end. 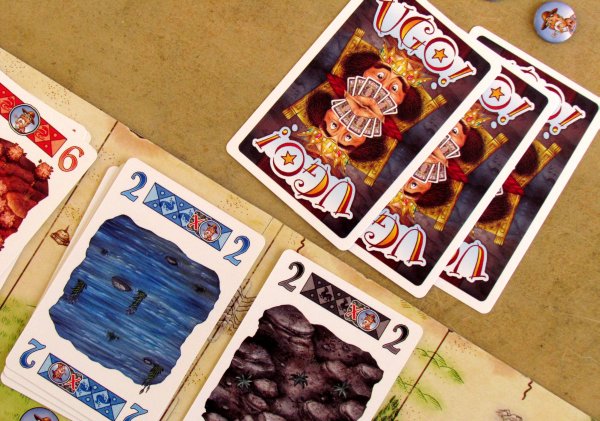 Scoring is tricky and heavily depends on the farmers. Much more important is fact, that one round does not end the game. When choosing a new ten cards for each player, these are shuffled back in. This is very important to pay attention to when shuffling, because in rounds, they are always grouped by color. That is the only thing, that slows down the a bit and unnecessarily prolongs otherwise very quick game time. Even then, game ends easily within half an hour.

Trick-taking games are generally not very fun with fewer players. Fact, that it is not quite it with two is always true, but not in Ugo! Thanks to the collecting cards in kingdom, even duel makes sense. Presumption, that its not just mindless playing of same color, but there is a need to plan ahead a little more, is still valid.

In actual rules, examples take up lot of space and tries to cover all possibilities. As a result, this game can be taught to complete beginners, who have never played any similar game. The only prerequisite is English and only for the purposes of the rules themselves. Once you know, how to play or learn it from someone else, you do not need any language, because there are no letters on cards. 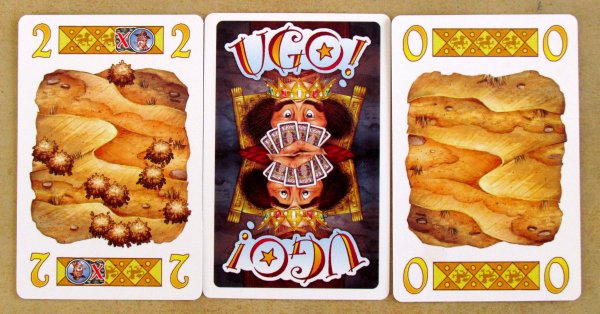 Simplicity of the game has resulted in a great message, that Ugo! is superbly playable, even in families with children. There is not so much trick taking games, that deserves more attention, than this one. It all does not revolve around winning with one card. Ugo! is really likeable game, with board and tokens can engage and entertain without problems.

Ugo! is a hardly known game. At the same time, trick-taking games in general have many games due to their simplicity, which brings interesting question. Why not UGO? It takes general model of trick-taking games and creates new ideas around it. Especially with farmers, who are required to score cards. Cards overlap each other and only one card of each color is scored. Players can harm each other with zero cards. Inclusion of player boards is a good bonus and increases transparency, but also improves the feel of the game. Overall, the game is fast and is dragged down only by shuffling between the rounds. Its quite random in smaller number of players, because many cards are out of play. But we still can easily recommend UGO! to everyone, because it is an enjoyable and fast card game.