by Dušan on 19. 08. 2015
0
previous article
Review: Fleets The Pleiad Conflict - bring your squadron together
next article
Review: Castro – board full of houses
Contents 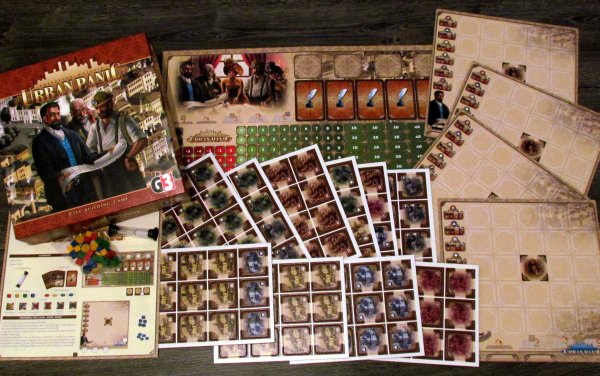 The middle was entirely filled with humans. Around it buildings suddenly began to grow to all sides. Homes, factories, offices and amusement parks. All squished next to each other. People have finally found a home. Place without nature, where they can live their lives full of meaningless technologies and smog.

Memory of the first town boom is brought back to life (only figuratively, because none of us can not remember it) by board game Urban Panic coming from Poland. Its author is Krzysztof Matusik, author of nice Craftsmen (review) game. And his new creation was also published by G3 and Games Spólka ST. Illustration were done by prepared Sylwia Smerdel. The whole was introduced at the fair Spiel 2014 in Essen.

Game is hidden in a brown square box, that is dominated by game board. One common plan allows players you to watch all the factors important for the development of cities – population, employment, environment, income and happiness. Last three may even go into the red. Next to five scales with figures, there are still positions for buildings offer and active tasks. Smaller boards are then aimed directly into hands of the players, showing a map of land (five times five fields), where they will grow their private town. 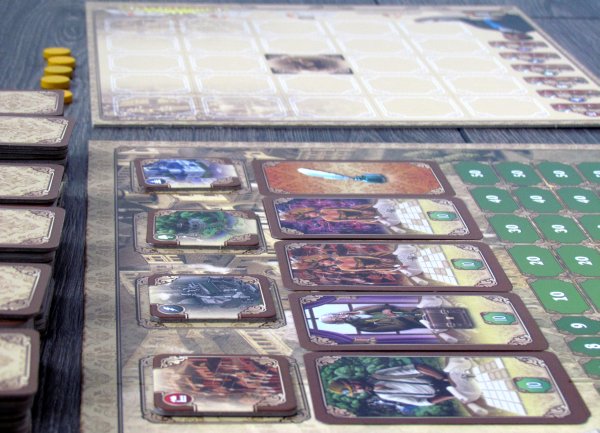 We also run into two other components – square cardboard tiles of buildings (six species) and eighteen task cards, which will vary from game to game. Each player will be served wood components – disks and cubes. And then the whole battle will be overseen by some plastic hourglass.

At the beginning of the game, players choose a color and take their own wooden pieces. Each will also get map of his land in the same color, indicated in the lower right corner. Players then deploy cubes to a common game board into individual lines, each placed on digit zero. Players shuffle building tiles, spread them into several piles and then pull out random four as the starting bid and arrange them on places on the board. They do the same thing with cards of tasks (amount depending on number of players).

After that game can start. Each turn, player has a chance to do three actions, one of which must be architect. Building is also part of this action and lets player take one of the tiles in joint offer and place it to bottom part of the board. There are three indicated positions, so noone may own more of them at the same time. 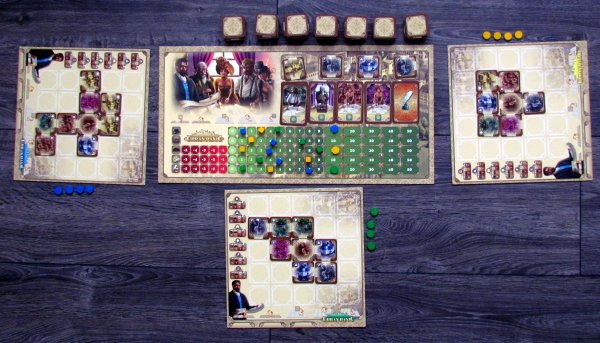 With action called Planner, these pieces may be moved to the board and in any free place (the pieces do not have to be connected). All tiles have paths on them and these play an important role. Later, it is possible to even swap buildings with help of an engineer. There are also actions called mayor (exchange pieces in the offer) and a spy, who builds a building owned by the other players.

After laying, these tiles affect condition of the city. Player then moves his indicators on the common board accordingly. Right on them is printed impact, they will have on the development of individual needs of city.

Game ends in two cases – players either run out of pieces to add to offer or one of them completely fills his city board. Then, time comes to count victory points. First, players remove pieces, that are not connected to middle of the city and simultaneously adjust scales correspondingly. Then, they simply add up values of all five scales, increase this number for amount of completed tasks (ten points for one) and lower it for number of jobs, that remained vacant due to lack of population (comparing two scales). Winner is player with the highest total. 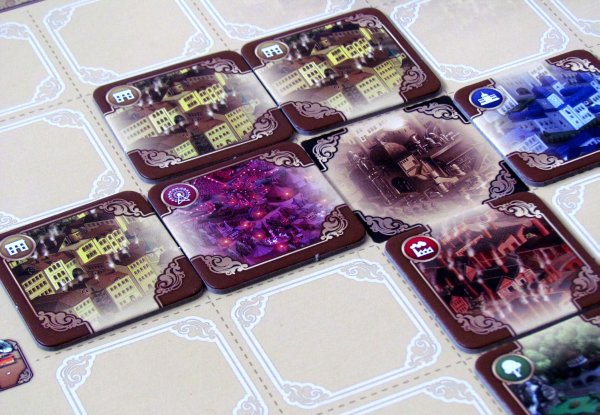 Urban Panic is a game about building a city, which is trying to go to fun through scales. And unfortunately, it fails in doing so. Additionally, there are much better games doing the same and much better. For example, a very interesting Urban Sprawl (review) or City Tycoon (review). Their playing is much more fun, than you can experience in Urban Panic.

Why? Fundamental problem is hidden behind every building. Besides enjoying growth of your city, you always have to move some tokens. These scales should be perhaps greatest novelty, but they are also weight, that drags it below average. Continual adjustments will shortly begin to annoy you and above all, match will start to stretch and is full of waiting.

There are indeed spies, which other players can use to steal tiles, but other than that, it is purely a solitary game. Everyone builds his own city and is not forced to look at others. He is only trying to meet and be better in common tasks. Indeed, these are not part of the basic rules, but they should be added only to an advanced game. We do not understand this decision, because without them, game is even less interesting and truly dull. 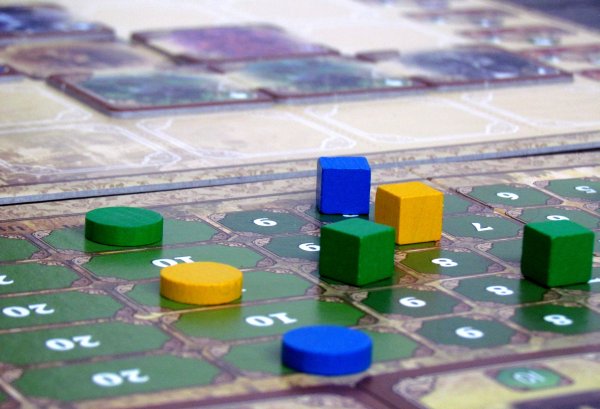 Building is easy and is directed at beginners and younger players. Complying with rule to lead paths from all pieces to the middle is not difficult, because player may select from up to three tiles and in addition can plan with those, which he has available. If someone else does not take them first. Overall, it is ultimately about competing, who steals valuable buildings for himself.

This whole failure is a shame, because apart from moving tokens constantly back and forth (remember for example swapping of tiles), game had potential to attract beginners and at least allow them to have a good time. Graphics of tiles would support this.

Despite a constant shifting, game usually lasts about 45 minutes, which is not so bad. Unfortunately, you will have the feeling, that most of the time was spent adjusting values on scales, rather than playing.

Urban Panic is unfortunately quite boring board game, giving you a nice looks with its graphics, but offers mostly disappointment and constant shifting of cubes. Entertainment should probably be hidden somewhere underneath all that adjusting of values, but we failed to discover it. Urban Panic is among us the biggest disappointment of games, we brought with us back from fair Essen 2014.

Urban Panic let us build a city from its first house. Players are trying to connect pieces with roads, because only these building may bring them points at end of the game. Each type of buildings brings a plus or minus points to different needs of population, that need to be constantly adapted on common board. Players spend too much time doing such activities and thus the game becomes rather boring affair. It will not be saved even a nice processing or sufficiently large number of tasks. Urban Panic is a sad example of how one idea can spoil chance of a game.

by Dušan on 19. 11. 2016
Trains are not the most popular means of transport, at least in terms of number of people transported. This will, however, not stand in the way of it [...]

by Dušan on 04. 03. 2016
It is time to look to the future. To a time, when robots will be the main partner in households around the world. And what will be artificial intelligence [...]
Comments
Leave a reply