Review: Vampire Werewolf Fairies – would you like True Blood? 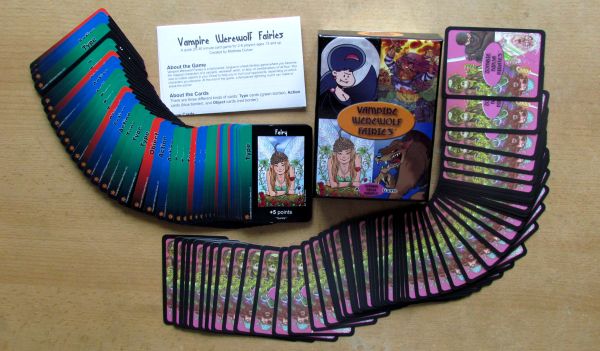 The world of vampires has changed with revelation of fairies. Their gleaming magic permeated the world. Initially, the vampires noticed them only as annoying insects, mainly due to their size. Fairies are really small and can easily buzz magic into your ear. Quietly steal upon you in the night (or day, if you are vampire) and enchant you, when you are dreaming and do not know about it.

It is this fairies power, which forced vampires eventually to retreat. Fairies now rule the world, but bloodsucking creatures are preparing to counter-attack. Not only vampires, but also werewolves and witches would like their chance to rule the world. Join the battle as a crossbreed on more races and prepare the future, you see as the right one!

You have this option due to the card game Vampire Werewolf Fairies from Gozer Games, LLC, which is distributed by Game Salute. The game is based on the concept of older card game Zombie Ninja Pirates and one of its main task is to enrich the original game and make an enormous experience of it. But we in our newsroom would treat Vampire Werewolf Fairies as a novelty, because we have not played the previous zombie game. 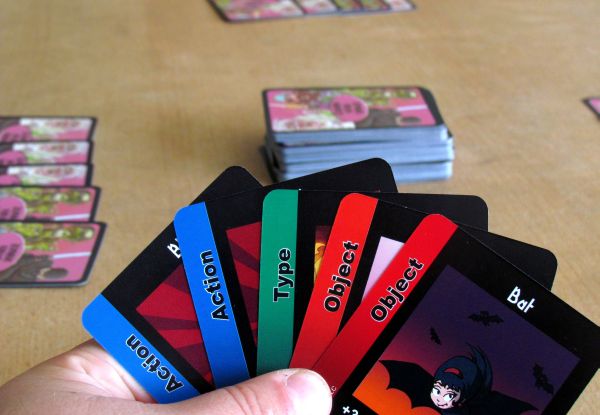 Emergence of Vampire Werewolf Fairies is work of its author, Matthew Duhan and four graphic artists: Phil Foglio, John Kovalic, Randy Milholland and Neko Pilarcík. The game was released in 2011.

Card game about vampires. It is not the first nor the last, but certainly far from those, we have played. It uses the dimensions of classic card games and hiding in a cardboard box, which contains two columns of cards next to each other. Something like a box of Zombie Fluxx (review).

On the lid, there is a trio of title characters and one more – you will find a with in the upper right corner, coming from the flames. Just like in the original game, where was the fourth race not mentioned in the title – crazy scientists. It is immediately obvious from the pictures, that each race was drawn by another author, which also corresponds to the number of graphic designers. The most subtle are the fairies, while vampire images are interestingly abstract. 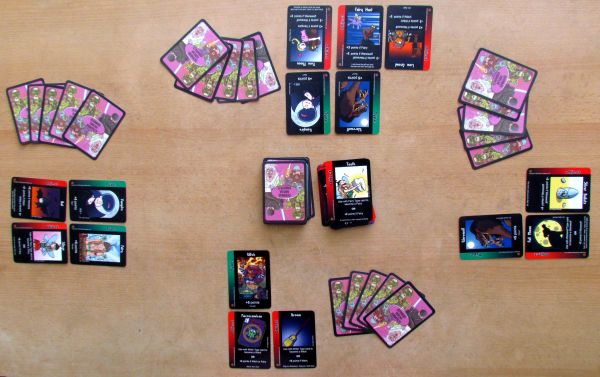 But regardless of race, all the cards you find in a box are decorated with a color bar in red, green or blue color. This indicates the card type and also determines, how the card should be played.

The very idea of fighting of these four races, may evoke goose bumps and again reminds us about already in title mentioned series True Blood from HBO. But there is no Bill or Eric, to save you here, you have to watch your ass yourself.

When unpacking you will probably see card back at first. But there are not those well-known characters on them, but instead there are zombies, pirates and ninjas. Why? Because there is nothing easier, than to combine this game with its predecessor to create an extreme experience full of various races and professions. But we did not have the opportunity to try such a possibility, so we can only speculate how it will play. And there is no room for speculations in a review. 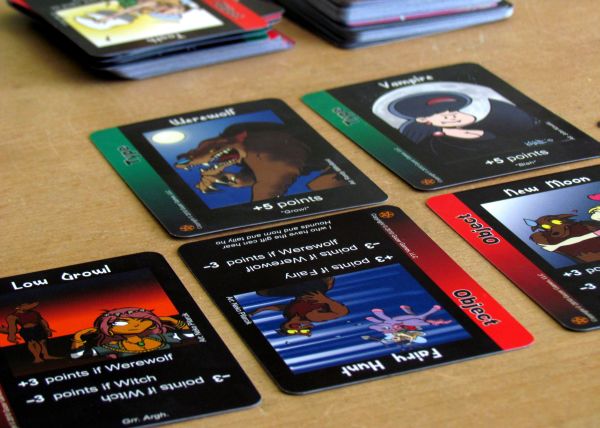 Total of 108 cards is hidden in the box. Cards are relatively thick and their shuffling in one package is not easy. Each player should take a part in it and shuffle a portion. But before you start shuffling at all, you should find a GAME OVER card in the deck with tombstone on it and put it away for now. Then shuffle all the cards properly and insert that GAME OVER card in the lower third. It would wait there to tell you the game is over. Now give each player five cards and game is ready.

When you unfold five cards in your hand, you start to think about, what actually those different colors of cards mean and how can they be used. So now we will look at them and explain. We have already mentioned, that there are exactly three types of cards in Vampire Werewolf Fairies – red objects, green type (race) and blue actions. Their names can infer many things, but it is still necessary to describe them in more detail.

The most important thing for you in the beginning will be green cards. If you play it on the table, then you determine the race, to which you belong. Thus also specifying the cards of other colors, which are relevant to you. Players may crossbreed their characters across races, so that over time may be a vampire-werewolf or werewolf-fairy-witch. How would this abomination look like? We could only speculate and use our imagination. But you can never have two green cards of the same race in front of you. 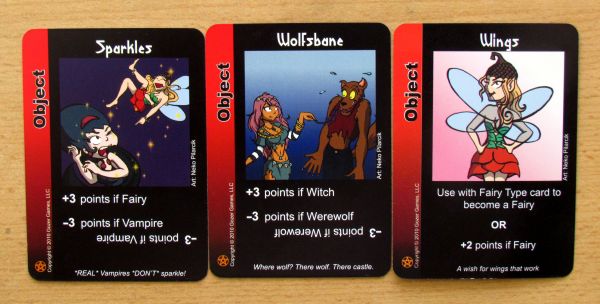 Blue cards have a special one-shot character and allow players to pick on their rivals, or somehow improve their chances in race duel. This is a nice contrast with the red line cards denoting objects, which you can also play in front of you or in front of someone else. Sometimes they can even be used as an action card, but in that situation you have to throw it away after use. It is preferable to have those nice and shiny objects on the table, where you can collect points for them in the end.

But most object cards only works with some races. The blood should get you two points as a vampire, but if you’re a witch and you have card of Trial, then you lose three points straight away. You can naturally get rid of cards also, but more on that later. Now when the card is in front of you, you can add or subtract points depending on your race.

For an easy overview of the points, you should rotate cards according to their current effect. If the card applies to your race, you should have it picture up, meaning positive points in final scoring. An upside down position means minus points, and if the card is placed horizontally, it currently does not work with your race. But that could change soon. After playing of cards, you should always change rotations of all cards to match your breed. 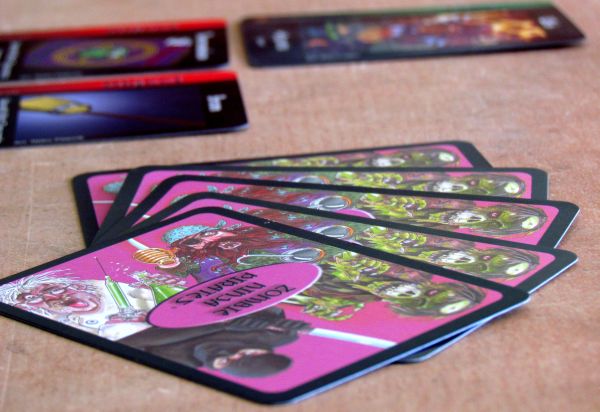 Now we can plunge headlong into the game. Each turn begins active player with playing one card of action or object from his hand. This is a compulsory part of the turn. The card can be played in your favor, or with intent to harm rivals.

You can now use one special ability from the object cards, which are lying in fron to fyou and activate it. And because you will often be hold cards, which are not compatible with your plans, you can throw two of them away at the end of your turn. Then you draw back up to five cards and pass the action to the next player.

If players really does not like the selection of his cards or has nothing to play, he can throw away all five cards and replace them with new ones from the deck.

The game continues until you hit the card GAME OVER. At that moment, a lightning round occurs and finished everything. In this round, you can play as many cards from your hand as you can. At the conclusion of the game, players add up all their points for cards and objects, and player with the highest total is declared the winner.

Vampire Werewolf Fairies is a fast card game of racial madness. It’s full of fun, simple and fast. And it is best suited for family playing with children, but also for the geeks, who can find funny text on each card. Even the drawings do not lag behind, when it comes to humour. At first glance, you can tell apart cards for different creatures, because they are each in different cartoon style.

The game is simple and requires no special strategy. This actually reminds us a bit of Fluxx. But the winning conditions here are strictly given, and only the means to get there are changing. Everything is constantly changing as you go deeper and deeper into the deck. Although the game should not be taken seriously, as the ending approaches, you can easily feel the increasing tension. There is one simple reason for it: the game has no fixed ending moment, it has a GAME OVER card somewhere in the last third instead. 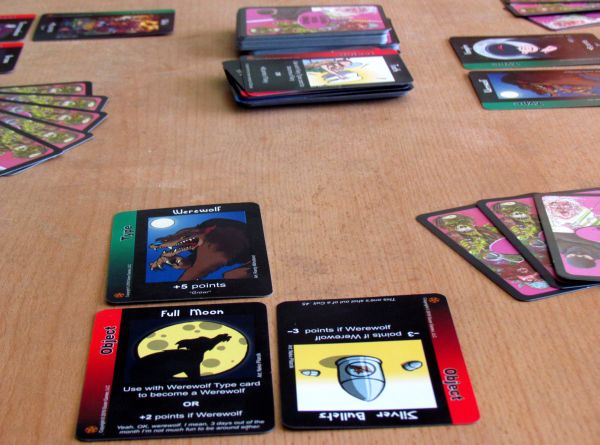 If you belong into the group of more advanced players, you have no other choice, than to treat Vampire Werewolf Fairies as lightweight entertainment. An easy card game to relax with really interesting options to attack your opponents. There is a large deal of interaction going on, although you can control the game only, when you have right cards in your hands.

When you plug in a match with less experienced players or children, you will see additional potential of this card game. Simple rules are the ticket for anyone, who can at least read the text on cards. They tell you, how to play them and what to do. Nice.

If you also own a previous box with zombies, pirates and ninjas, you can elegantly combine them into one incredible game. And if you own it, you will probably be interested, how different are the rules. When you combine these two decks, you can easily tell them apart, because the new game cards have a pentagram in the bottom left corner. You get seven cards into hand instead of regular five. 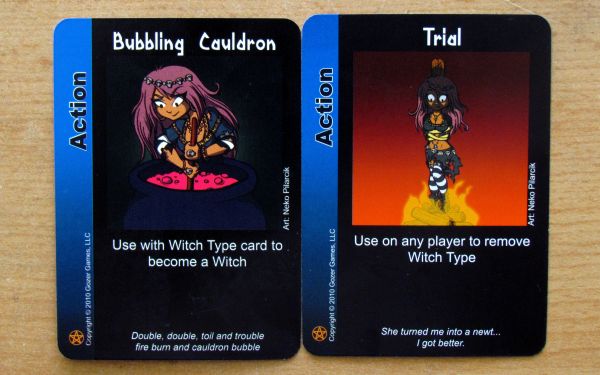 The rules are the same. Just some of the original cards get new abilities – like witches potion allows you to become a mad scientist as well. It is true, that there is not much difference between mad scientists and witches, so we are willing to believe, that its possible. All those changes are listed in Vampire Werewolf Fairies rulebook.

Vampire Werewolf Fairies card game relies on simplicity and fun. The game makes no demands on thinking, you are always trying to choose the best card from your hand to play. Is it better to harm your rivals or play it to your advantage? In the course of the game, the answer to this question varies. What would you become, if you had a chance – a vampire, a werewolf, a witch or a fairy?

- chance can ruin your plans
- too cutthroat for some children

Vampire Werewolf Fairies is a simple card game suitable for family play, mostly with children. It has really easy rules and straightforward gameplay. Players are trying to gather points, when taking a role of a crossbreed of available races. They can play positive action cards, gaining points, but moreover can they harm others. This is the solid point, on which the whole game is built - hostility of players against each other. Grown ups might get a little upset about large influence of random card draw. Vampire Werewolf Fairies is a simple relaxing game, where everyone will try to push you back..