Review: Versailles – building of the century 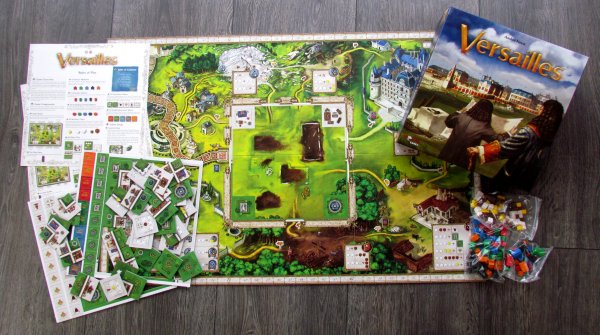 I was in charge of building one of the largest and most beautiful palaces in the world. There was just a small hunting lodge, when I got here. But nobody could have guessed now, where it began as seat of the monarchy begin to shape. They said, that even king himself went down from his throne to watch first stone being placed. In fact, queen Marie-Therese was the one to really arrive. But I had the opportunity to meet with him before, while the whole complex was designed. And it was really a wise and prudent man, who guaranteed certainty of monarchy long years to come.

Stand by the side of the king during construction of Versailles. You will be appointed to that position by board game with title corresponding to this castle, which prepared for us Andrei Novac, author of Exodus: Proxima Centauri (review), under flag of his publishing house NSKN Games. Odysseas Stamoglou is responsible for illustrations.

Anyone interested in building should line up in a queue in front of a square box, where we can see architects at work. Before them rises building under construction. And we plunge with gusto into the heart and search for building inside the box. We find folded game board, which has building area in the middle. Paths on it allow workers to walk between nearby buildings, that provide them all help their need. Each has also an adjacent box describing its abilities. 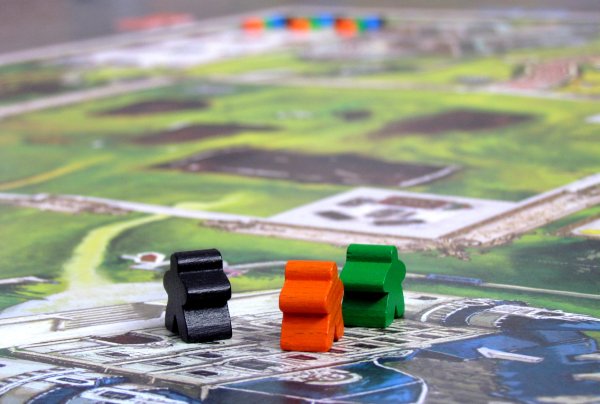 Forty square tiles are exactly, what players need to build the palace itself. They represent internal and external equipment seen from above. Before completion of their work, players will need also smaller decoration tokens and a dozen tokens of double movement.Rest of components is made of wood and includes one king pawn, 45 pieces of workers, tokens of activation , scoring and technology (all in player colors) and ninety cubes of raw materials (gold, marble and wood).

At the beginning of the game, players place game board on the table and choose color of their guild. All wooden pieces will be in their possession. Exception are two workers, which have to be placed on position of royal favors from which they can later join the works. Scoring tokens as well as technology tokens will begin their journey on starting positions of their scales. Players then spread their workers on different buildings according to table in rulebook.

Board also needs to be equipped with initial five pieces of palace building made by architects. Decorations start match next to game board near workshop and king´s pawn starts his descend to building on sidewalk from upper left corner. 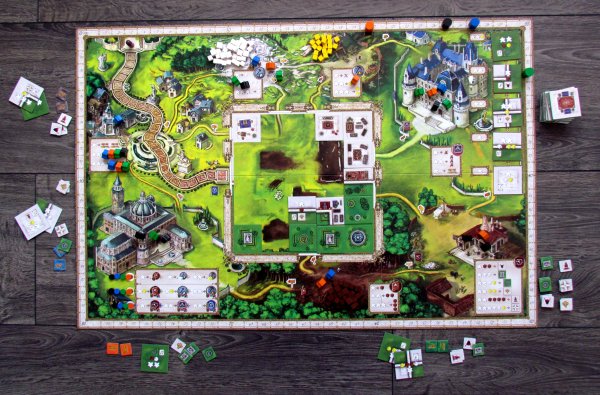 And thus begins fight of all architects, which will revolve around workers and their movement. Among buildings are the paths and signs, which turn them into one-way streets. Because figures are already prepared on the game board, players do not take them back, but instead only move them around the site from one location to another. To can move worker one place forwards for free. By paying a one-time token, this speed can be doubled.

Player marks this place with one of his colored tokens and immediately uses its ability. This tokens stays there for the next turn indicating, that player can not take advantage of this action again. Players can earn decoration tokens, architectural pieces gardens and palaces, and especially diced raw materials needed for construction. Often, players need to have several pawns in their location (for example, buying a newly revealed tile or more efficient extraction). But the game also allows players to recruit new workers, to improve their technology (better material income) and restore their tokens for double movements.

Only with proper purchase, it pays out to go to construction site, where player can use their accumulated pieces, pay the cost and attach new tile to existing ones. He immediately receives receives number of points, that are printed directly on that tile, as a reward. 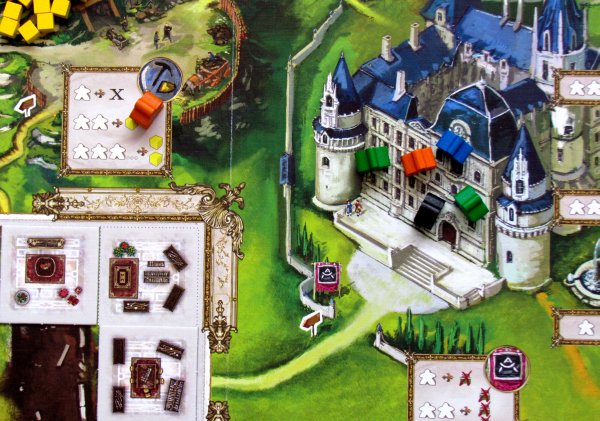 Every time players will visit royal location (one-way roads will lead them there) or skip it, they must move king pawn towards the construction site. Once he arrive to do his control, game immediately ends (just like when players run out of tiles), and it is necessary to determine the best builder. As a bonus to their existing earnings, players also get a reward for remaining ingredients and tiles. There are no penalties. Player with the highest point total is the winner.

Versailles looks like an ordinary game with workerplacement mechanic, when you first look on the board. But the pieces already start on the board (with the exception of those newly recruited), and they do not leave it for the whole match. Author had invented a very good and elegant system, in which pawns simply move on schedule and activate locations simply by visiting.

And this idea gives the game a fresh and new feel. Players always seem involved, seek optimal paths and steps for their workers. With that is tied one crucial fact – you have to like planning and thinking ahead, because Versailles wants this. Its a very thoughtful game. Some players have linked this mechanic to classical African game Mancala and they are right. Moving marbles or meeples, who can tell the difference? Now, here possibly lies inspiration of this author. 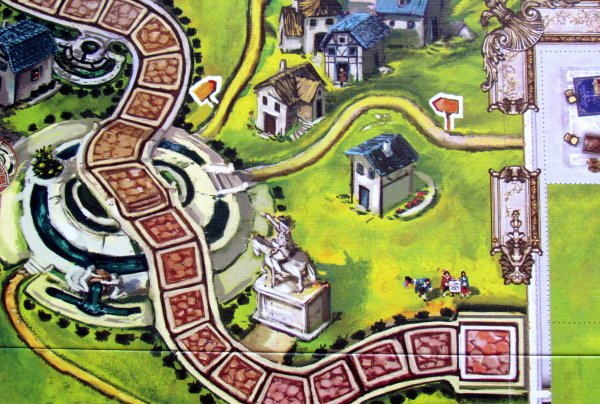 In demanding play, it still retains very simple rules. Thanks to it, you teach it without any problems to beginner, which will lose, but accumulate some points and will have feeling of a job well done in the form of built palace. However, individual games are way too similar and you can find optimal way to victory. You simply need to discover it.

Match initially has a very good pace, everything is growing rapidly and all players are trying to earn points. But it lasts a bit longer for classical worker-placement game. Towards end of the game, pace truly declines. There are also problems in balancing gaming experience for different numbers. An ideal number seems to be three players, when lack of ornaments and powerful technologies will not start to manifest themselves. Game works quite well with two players as well.

Players are building something real in front of them. Tiles look good together and all components have kind of quality, we expect. Perhaps only the rulebook raises several questions. And some others are easily overlooked, such as the movement of the king, when skipping over the box. 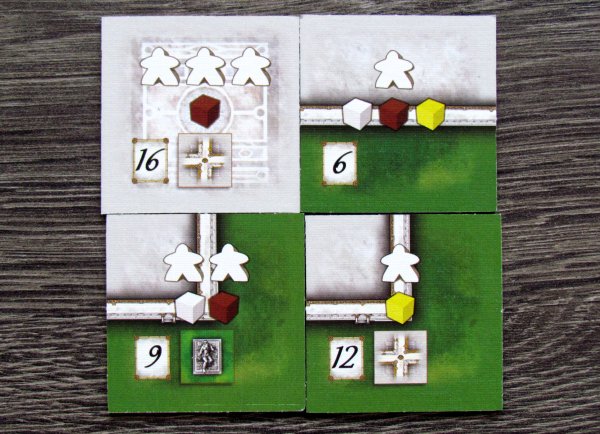 Versailles have a very interesting mechanism, which makes you feel good. We very much wanted to like it more. But theme of building something has been here many times and this time, there are also minor flaws, diminishing the experience. Overall, this is still game, that can entertain, but we can not help thinking, that it could be a whole lot better. Versailles is still a good choice for worker-placement players, because at least offers a slightly different view on this popular game mechanic.

Versailles is a game, that arouses mixed feelings. Somewhere in there breathes a fun and interesting game, but the path to it is difficult. Plenty of obstacles are waiting on the road, such as longer playing time, problems with different numbers of players and too similar matches. Yet, we do not feel as bad as it might seem from review text. The game can be fun and surprising, especially for beginners and less experienced players. Although the theme is rehashed building over and over, but it looks nice and moving workers around the board is really interesting. Versailles is unfortunately stuck somewhere on its way to a really good game.

by Dušan on 29. 11. 2019
The greatest danger of traveling through the North American is said to be bears. At least everyone started telling us that, when we announced our intention [...]

by Dušan on 22. 11. 2019
Just a few moments ago, it was an ordinary field, that my brother and I went through. But then suddenly a group of Death Eaters materialized near us. We [...]

by Dušan on 18. 11. 2019
If an unsuspecting tourist came here, he would have thought, it was just an ordinary cave. No indication, that there is some king of a bloodthirsty sleigh, [...]
Comments
Leave a reply