by Dušan on 03. 11. 2014
0
previous article
Review: HomeStretch - finally a decent horse bet and racing game
next article
Review: The Lord of the Rings Dice Building Game - with dice against Sauron
Contents 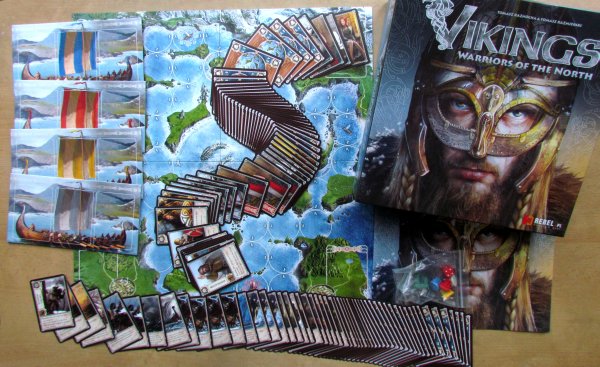 They came without invitation, invaded our village, set our houses on fire and kidnapped our daughters. Vikings are expanding their territory. We managed to escape to neighboring town, but I fear, that horrors will continue here soon. And yet there is hope. We heard about some disagreement in the Viking clans. Battle for the crown, which may divert attention of bloodthirsty men away to their own midst.

We head north as well, because these rumors are true. And who else could compete for command of viking clans, than me or you? Welcome to board game Vikings: Warriors of the North, which was brought to market at the end of last year (2013) by publishing house REBEL.pl, created by Tomasz Kaznocha and Tomasz Kaźmierski. Illustration were provided by Jarek Nocoń and Bartek Fedyczak.

Box floats on the waves and contains entire game in a classic square shape such as Mount Everest (review), we talked recently about. This time, we will not be welcomed by snow cover, but instead face of a Viking warrior in helmet. His head swallowed lots of stuff inside. It starts with large board of Viking territory created into a folding board. It is made up of greenery, water straits and its space is divided into boxes in the shape of a circle. 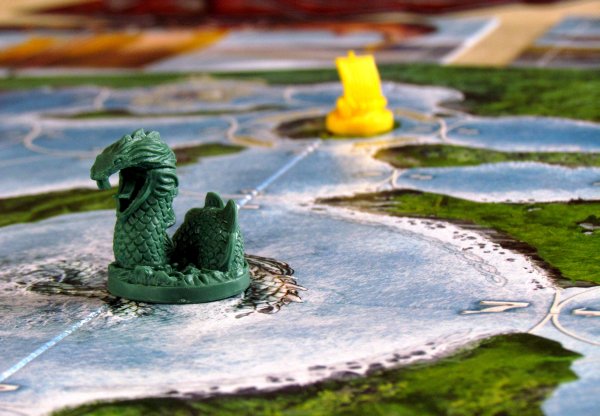 Inside the package, there are also four cardboard gaming boards depicting a Viking ship sailing under different colors. Such ships provide space for cards and enclosed in the bag are also their plastic forms, which will move on the board. There are also wooden cubes, sea monster miniature and 106 cards.

Cards contain twelve beautiful daughters, waiting until one of the candidates for the manly viking takes them as his booty. Remaining 94 cards are actions consisting of characters, events, and wind cards. While the first two mentioned types are controlled by text, that describes their effect, wcards ind shows directions important for sailing.

Starting the game can not revolve around anything other, than laying the board in middle of the table. Lair of sea monster is in the middle, where its miniature is placed by players. Chief daughter decks are split by color and four piles are created out of them, while remaining cards are shuffled to form drawing pile. 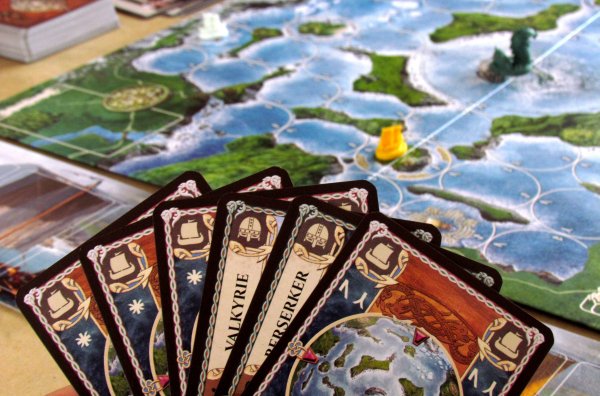 Only then can individual opponents choose a color, take corresponding ship board and miniature. Then players dock their ships into port in their color at the edge of the game map. Everyone gets six cards from common deck.

At the beginning of each turn, players will get two new cards from the deck. They can then be immediately played and their options activated. First one concerns heroes, who grew up in the nation. Such cards can be played on ship board, where he immediately becomes a sea wolf raider. Some heroes have abilities, that are always applicable, others can only be used once per turn. But it is always necessary to think about the fact, that ships have limited capacity and so they need to have space for kidnapped daughter of warriors.

Before they become lovers and abductors, vikings (players) must learn to sail the seas. To do this, they use another card from their hand to indicate wind direction. But its not enough to play a card in the right direction, because map contains various passages, that permit sailing only in certain directions. Each box has its allowed directions indicated by the compass and when player’s ship is on such field, he can only play one of these cards. 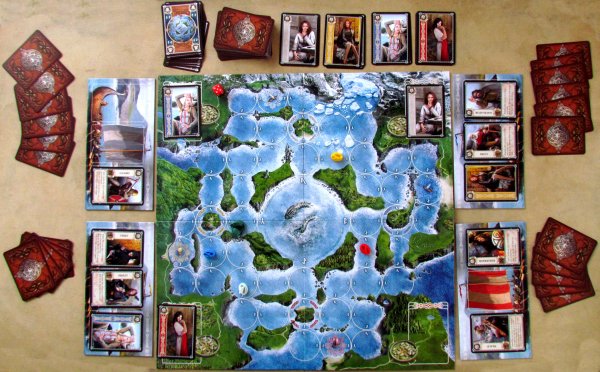 Even event card can be played to force the wind, but it mainly offers special abilities. Players can respond to them with special actions, that disturbs their effects. But all players in order of the game may imply on its activation, so defensive cards can also be trumped, if some players further in turn order wishes so.

These wind events can be performed in any number until player has sufficient cards in hand and his ship’s position at sea allows it. Playing cards can be combined with one of the firmly established actions, that allow rivals to perform special activities, once per round. These include exchange of cards, attacking villages, in which warriors find Thane’s daughter and when crew brings her home, they must hold a celebration for her. Only then can player add her to his collection. Actions allow also to attack other opponents (for profit or crew card) or sea monster, that is otherwise free to move around the map and restricts ship movement.

A player’s turn ends, when he chooses to. As its conclusion, he may order his men to row once. Their strength is sufficient to make boat move one space in any direction, because this time, wind does not matter. 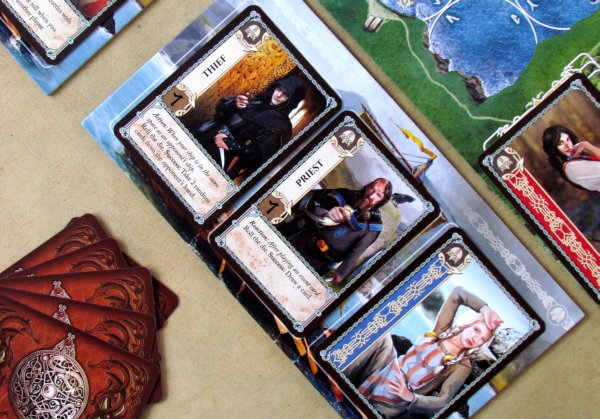 Winner is known, when someone manages to successfully kidnap third daughter and transport her to his village. These girls must be from different villages and different color, than player’s ship. Player can not attack the village on his own territory. Once someone gets third concubine, he becomes immediately winner and king of the north.

Vikings: Warriors of the North is a game full of sailors and brave men. They must prove their courage and player must defeat not only the indomitable wind with their help, but also enemies on the map. All races together and try to reach their goal faster, than others.

Others will try to defend their goals. In his turn, anyone can sacrifice action and attack directly your ship, when their are close. But there are other, less demanding ways to bring misery on your opponents. You can often simply cancel effect of their cards. This of course depends on playing order, where players sitting at the table and so you can upset easily only your neighbors. 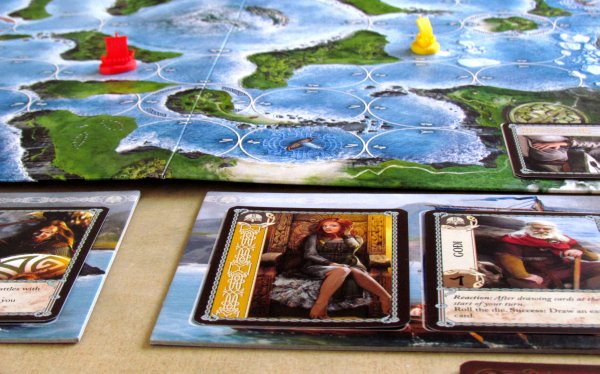 Chances are balanced in the beginning of the game and it also depends a bit on luck, what cards of heroes are dealt to you at start (and later in combat, there is rolling dice). Cards are very important and it is essential to have right ones at the right time. Therefore, it is sometimes not easy to sacrifice them for a lower and simpler things (like wind), but its necessary.

Good news is, that with ability to respond outside the player’s turn, nobody gets bored. Each participant must carefully monitor development of the game and eventually join it. This option allows to cancel virtually any action by each other, but also brings a partial frustration, if this happens to you multiple times in a row. Player then loses a sense of control over the game. Such freedom for the player is not a good thing for whole experience.

Game is a bit better in four, than in other numbers, because map is fuller and everything sparkles more. However, it will slow you down with ability to play cards out of turn. In three, there is simply not so much options to harm other players and this is not good, because playing cards is base for most fun, this game offers. 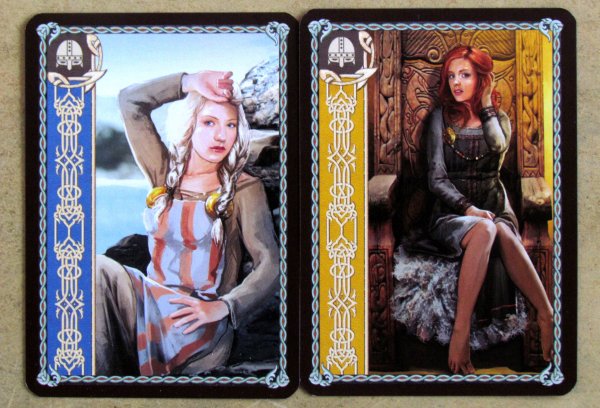 Theme is interesting, but its not center of the game. Actually, you could be any sailor (or even space traveller) trying to get some thing from villages (planets) around. Authors chose wisely Vikings, who gave the opportunity to handle this game in unique way. They certainly did great job with this and game looks absolutely amazing, although it is sometimes at the expense of practicality – yes, symbols direction, we are looking at you! The graphics are really main thing, why you would actually buy the game. Jarek Nocoń again proved, that his illustrations are great and hold together well.

Game can be playing within reported 45 minutes, which is a bit of salvation for it. If it lasted longer, you would be outweighed by feeling of boredom. But fortunately it finishes on time and as the whole, its not so bad game, as previous paragraphs might indicate. We were a little bit harsh on it. In the end, its mainly up to the players, if they like “racing” games, in which everyone tries to reach his goal as quickly as possible.

Vikings: Warriors of the North will not make a hole in the world, although its processing and illustrations are really prickly and game looks great. Unfortunately, result is only average. If the players look well, they will find options tricky enough to push obstacles in the way of other players and thus enjoy the fun. Waiting for a move is not time consuming and game ends on time. Thanks to this, Vikings: Warriors of the North are not such a bad choice for an evening gang.

- topic is not intertwined with the game
- luck with cards and dice
- frustration may come, when your actions are interfered more times

Vikings: Warriors of the North will take you among Viking warriors. You will become their master, sail channels with your rowing pals, avoiding the sea monster and trying to hunt Thane daughters of small villages for yourself. But also other tribes stand in your way, fighting for dominance over the entire area. Players have great freedom in their turn, when it comes to choosing actions, that stems not only from randomly drawn cards. Game passes quickly and players are constantly involved, because ability to thwart activities of others out of turn. But this might sometimes lead to frustration for player, whose action is blocked. Game is generally fast, better in four and looks amazing on the table. In such a precise workmanship, you can even forgive, that topic is not deeply rooted. Vikings: Warriors of the North are ultimately quite entertaining, though not exceptional and throughout average game.