Review: Viticulture – we are a wine nation

by Dušan on 13. 05. 2015
0
previous article
Review: Lords of Waterdeep Scoundrels of Skullport
next article
Review: Warhammer Invasion The Card Game - battle for the city
Contents 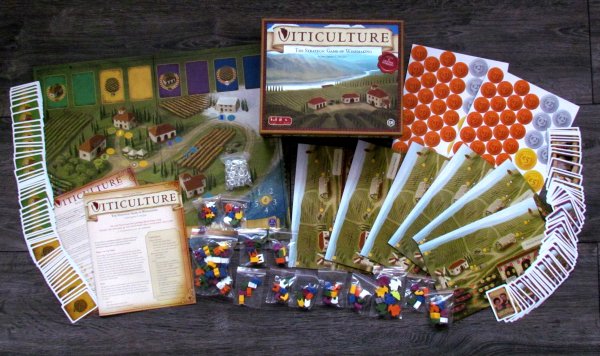 Wine. Fluid of gods, who descend to us on Earth from time to time and provide means to caress our taste buds. Each year, new harvest is maturing in vineyard. But by collecting, the process is far from over. Grapes have a long way to go, before they reach the desired rounded glass and delight their fans.

It has only two colors and you will be able to identify them closely thanks to authors Jamey Stegmaier and Alan Stone. Their game Viticulture covers whole life cycle of wine from seed to orders. Based on these two names, name of the company Stonemaier Games is derived and we will see more games from them in the future, for example Euphoria. We had a second edition of Viticulture on our table. It should be noted, that the first one has faced with some complaints and disgruntled players and this was the main reason to publish second, improved version.

Box is slightly oblong, but also a little higher, than we are used to. Unusual dimension are filled with a big chunk of components, that start on one common board of the vineyards. It contains not only the graphical representation of waiting spaces on each point of interest, but also storage space for decks, scale of victory points and table of early birds (wakey, wakey!). 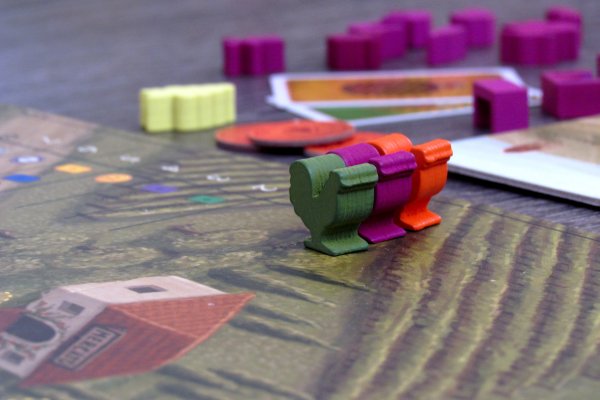 For each opponent is also prepared his own board with lots of rising values (where wine will be placed) and fields with space for planting and harvesting wine. That allows inclusion of 118 cards, that represent not only wine, but also coming of different visitors (summer and winter). Altogether, four packages differ in appearance. While incoming people have text on their cards, wine and orders do only with numbers, whether they mark value wine, amount of orders or profit in the form of points.

On the way to the resulting liquid, players will also be accompanied by pile of wooden tokens. They have different shapes and represent workers, wine grapes, but there are also roosters or various buildings in player colors. Players push also 72 tokens of lire in three different values out of their place in cardboard sheets.

Each player chooses his color and gets rooster, victory points marker, but primarily workers (starting with two small and one master) and buildings. All made of wood. Scoring space is occupied on zero, while rooster is placed above waking table.Rivals of course also get their own board and one card from each wine deck as well as one summer customer. All packages are then shuffled and placed at the designated places on the plan. 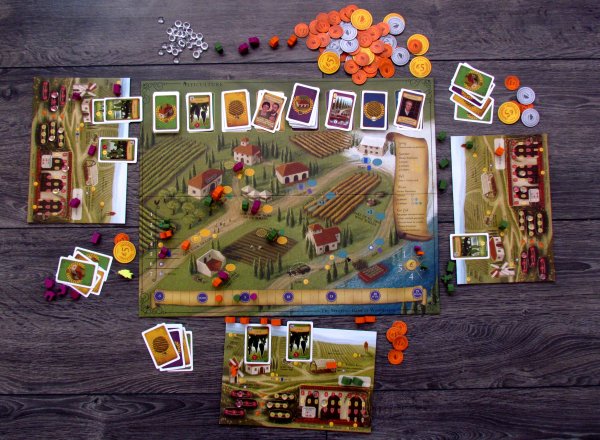 Individual rounds are divided into four seasons – spring, summer, autumn and winter. Spring tells story of waking up and crawling from behind the stove. Players can choose their own order, which is interesting for them and all this on scale out of seven positions. While the player with the lowest number (and not necessarily just one) has the advantage of going sooner, others get some reward for their handicaps (cards, money, etc.).

In the summer, now players can use their workers and send them to one of the six available places on the board. They make guided tours for money, but also spend it and build buildings on their own property. They can also get a wine card or plant a vineyard, simply by placing cards on the corresponding spot (multiple cards can be stacked on top of each other). Summer visitors can also be played and especially sales of already crushed grapes may be completed.

Constructed buildings give players some advantages, but also some action boxes. Most of the time, buildings bring some extra money from sale of older and better wine, as well as victory points for each tour or planting. Other buildings (eg. irrigation system) are requirement for player to ever grow some types of wine. And after such a merriment, fall occurs. Resting time for winemaker, in which they watch vineyards and only invite one of the visitors to his vineyard in the game. 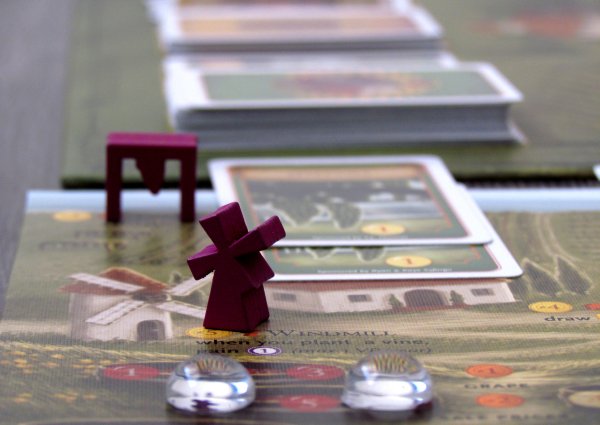 Winter is on the other hand full of new activities and there is a choice of seven actions, when they practically coincide with already played summer options. But be careful, because player my use only free workers, who had not worked in the summer!

And again, he can obtain card, this time representing received orders. Support function is here done also by hiring new workers. But only now, players can harvest field, transform grapes into wine and parry any of the orders.Harvesting involves counting cards from one specific field, separately for white and red wine. Their sum appoints position of a given value, where player puts a translucent stone on his crushers, where the grapes will wait for further action. Other activities can crush those grapes and move them into the cellar, where they age into a delicious liquid beverage. With finished wine, player can cover any of the orders and gain victory points, but also a shift on small scale of bonus payouts.

At the end of the round, wine matures and not just in the cellar, but also on crushers. Players move their tokens to higher number. All workers return home to be able to work in the spring again. Now players also receive a bonus payment for order fulfillment. Starting player (the one, that selected sooner getting up time) changes. After several rounds, one has to check, if some of players has gained twenty victory points. In this case, game ends with the victory of this particular winemaker. 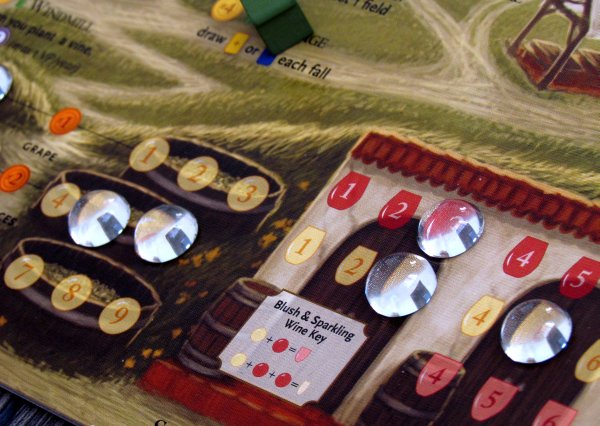 Viticulture does not excel in originality of theme, but in its processing. There are no new elements, that you would never have seen before, but they still might be assembled into tremendously entertaining whole. And this was done here. Game offers a wide variety of ways to earn points and thus different paths to victory. In addition, the very beginning of each round, when selecting time of getting up, is great, though not entirely original.

It is not somehow extremely difficult game. Some liken it to a little more complex Stone Age. This means, that it is not suitable for complete beginners, but already player with some experience will not be lost and can enjoy it. Their chances on victory are slightly influenced by luck of draw. Good orders may mean really positive news for gamers. But thanks to them, you must try to remain flexible, because sweet reward is always waiting there to be grasped.

As well as other worker-placement games, also Viticulture has its own specific rules of worker placement. Each position can be occupied only one, but only one of the boxes allows player to get a bonus – first comes, first served. Exception to this rule is master, who can share the field with any other pawn. This figure extends capabilities of players and there will never be problem of blocked place, where you need to get, but can´t. Even in this situation, you have a chance of taking it and we really like it. 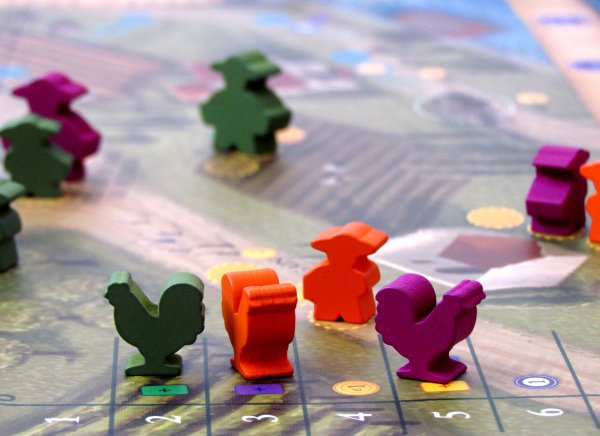 Playing in different numbers of opponents is distinguished by the amount of spaces, that are available to them. This makes the battle for the wine always difficult, but in an even number a little bit more challenging (4, 6). Depending on the number of participants, tactics is also changing, when with two or three you will focus more on the tasting room, while more rivals bring village to the front. In addition, most of the match time, all players have a chance to win and it is not clear, who will emerge as the only and true champion in the end from behind wine barrels.

Buildings are important for strategy regardless which of them player chooses. Each building has its own significant bonuses, that can be useful. And maybe you just then discover, that way to win is not automatically to gather as many workers and then send them out to do actions.
Here, it is necessary to add, that the game is excellent (really!) in two players. You have more turns to do stuff, because boxes with bonuses are not available. And because of this, you can also discover new strategies and long-term plans are worth more, than in matches with higher number of participants.

There are no significant conflicts, but this surprisingly does not matter. Peaceful wine growing somehow includes fun, even with each player minding his own stuff. You will be competing only for special fields, and then meet up at the finish line. That is only after some ninety minutes, which may be a surprise number to anyone. Due to this, it is just enough time for you to develop strategies and really enjoy it. 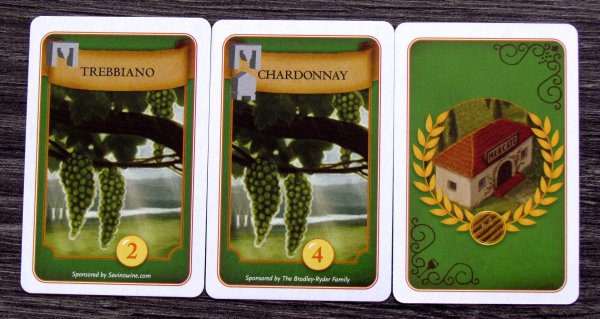 In addition to all this, Viticulture is really nice game in processing. Detailed and clear boards are complemented by beautiful wooden pieces, that give the game the right atmosphere. This time, the real feeling of producing wine is not missing. Theme is filled to one hundred percent, although there are more games with similar topic (Grand Cru, Vintage – review).

Viticulture is an excellent game. But when you decide, if this is game for you, everything will probably break on the fact, whether you like worker-placement. If yes, this game is at the forefront with the very best in the genre, and you can not make a mistake by buying it. You will enjoy it for a long time. Otherwise, you can still be persuaded by processing and beautiful theme. Remember, Viticulture is really matured game of the year!

- random cards
- someone may be missing conflicts

Viticulture is not first game with the theme of wine, we played. And yet, it is this last in the line, that has surpassed all and showed us, what fun can growing wine be. Game is everything you would expect and it all moves due to sending workers to different places, not only on a big board, but also on small, private one. Each round is cleverly divided into four seasons, between which players must also carefully divide their workers. None can be used twice. In addition, master winemaker can come to already filled box, so players will never get blocked out of their plans unnecessarily. The game is quite solitary, but perhaps precisely because it also works well in two. Regardless of the number, ninety minutes will be full of enjoying different strategies and planning. Although luck can help victory a bit, it just means, that player was better prepared for all possible variants. Viticulture feels like wine, that has matured somewhere for a long time, so we can enjoy its really good and delicate taste.