by Dušan on 01. 05. 2015
0
previous article
Review: Mad City - city of building and destruction
next article
Review: The Captain is Dead - on a ship without a leader
Contents 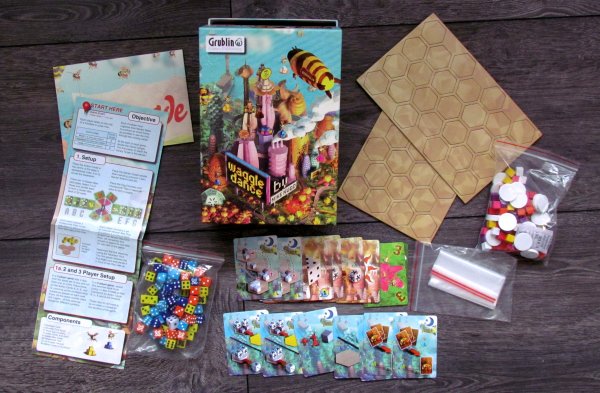 World of people could not be farther away. We happily dance in the sunshine and talk with flowers. We do exactly, what we like to do and still working at it. Simply stop for a moment at each blossom and shake it a bit. Fragrant pollen snaps at us and we begin to sing. At the moment, we will be almost forgetting, that we must ensure our hive for the upcoming winter. But then its time to quickly snap out of intoxication and we are on our way to another flower. Our hive has more groups and all of them are competing for chance to be closer to queen this winter.

Mysterious name Waggle Dance hides a board game, that really tells story of a group of bees, that are flying around the meadow. You do not have to worry, that we would have to dance alone and fidget. The game was invented by Mike Nudd and released by company Grublin Games Publishing. Illustrations were done, before issuing them in 2014 (in time for the fair in Essen Spiel), by Mateusz Szulik.

In the box with a picture of a modern hive, there are six-sided cardboard pieces of honeycomb. To bee dwelling belongs also a deck of cards – dozen action cards with letters and places for dice and another pile of cards showing nectar to collect. Same color as the nectar have also wooden cubes, that players will gather. Remaining set of forty cards presents various options for players. 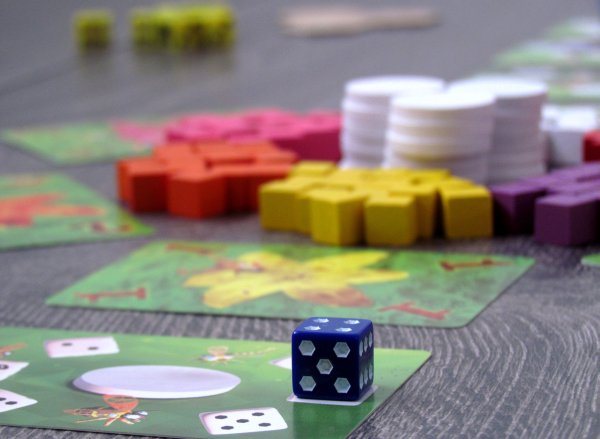 They will certainly appreciate this chance, because main component of the game are dice. Game comes with a big package in four colors – one for each player. Made of wood are also round eggs and all this is coupled with one big volunteer dice.

At the beginning of the game, players place a series of action cards according to letters and in their midst create also nectar offer from cubes on their corresponding cards. Each player gets a set of six dice in his selected color and three pieces of honeycomb. They are prepared into starting formation, creating small hive. Together, player selects ten of the fourteen types of queen cards, shuffle them and create a drawing pile. Starting player gets a card daytime and turns it upside down.

Player turns are divided into day and night. Sunshine makes worker bees fly out into the field and gather. Players together roll dice and according to their results, one after the other (by one dice) place them onto positions on a common board.They can be sent to one of action cards, that have numbered positions for these purposes. Once one of players occupies some value, others can not use same number on this card. Players can like this get hold of new honeycomb for their hive, a queen card or an egg. 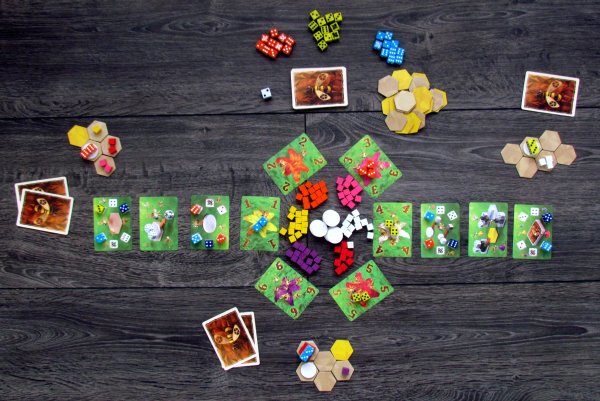 Cards of nectar are distinguished by numbers from one to six. But they can hold more dice simultaneously. And now we are left with only two actions without any values, which are not used to place dice on. Instead, players sent workers to their own hive, either to place new egg (hatching eggs action) or on position, where nectar was placed before. They turn it into honey.

Once darkness falls, there comes possibility for all players to perform selected actions. Bees therefore can let their wings rest and instead throw themselves into work. Evaluation is carried out by the letters of the alphabet from A to G. Most of the events are clear from way, we have described in the previous paragraph. Newly obtained nectar, honeycomb or egg must be immediately placed in a hive. It is equally clear, what happens, when you draw queen card. This can then be used at any time for its special properties.

But everything starts to get interesting, when it comes to hatching eggs. Here, player needs two dice of the exactly same value. This means, that he receives one new dice from reserves for all upcoming rounds . Even nectar production is not as simple as it might seem. Sweet powder is not received by all, who placed their workers on flower cards. Instead, each card will bring profit only to one player – whoever has obtained most nectar gets two cubes of that color, second one in line recieves only one. In case of a tie, only winners get nectar and only one cube. 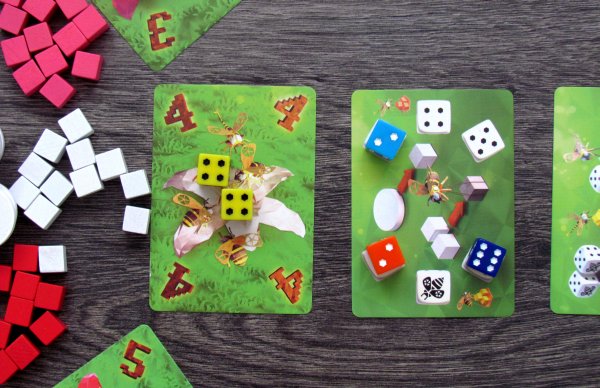 This nectar can not be simply placed ahead of players. They have to store it in their hive. It must be in a free poisition, while each honeycomb can accommodate up to total of four cubes of the same color. Colors will play an important role, when player sends his workers to this place (two with the same value on the dice, remember?) and starts manufacturing honey. As a result, cubes are returned to the flowers and player can turn his or her honeycomb tile with yellow side up. With the same action, player can also move nectar instead, but he needs again two workers of equal value, but this time in different locations.

Dancing in the meadow ends, when one player reaches target number of created honeycomb with honey. Values range from five to nine and determine length of the game. Whoever first reaches this task becomse winnter without any further waiting.

Waggle Dance is thematically very nice board game. But that applies only after you get through a confusing packaging, which partially (with the title) could evoke a party game instead. But this is honest and fun tactical game, in which you must use your planning and ability to roll the dice. 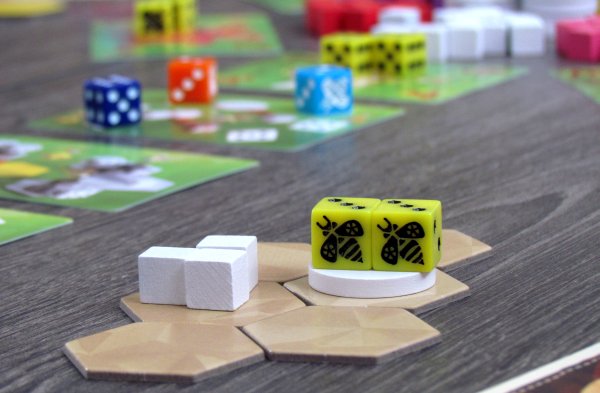 Game uses a very popular mechanism of activation events using dice. Most actions allows you to use all the numbers from one to sixes at the beginning of round, but gradually as the players place their dice, choices narrow down. This versatility is a big advantage and makes the game fun with less experienced candidates.

Dice classically bring hard choices, because players need always a pair of the same value for implementation of actions in their hive. Even building works the same way and honeycomb tiles are needed not only to position eggs, but primarily to store nectar and convert it into honey.

Although there are many actions, they are all simple and have clear rules. In addition, they all have meaning and at first glance, it is clear, where you are going by selecting them. This makes Waggle Dance a very suitable game for beginners, who are simultaneously well entertained by it. Although dice are main component, without which you can do nothing, luck is surprisingly not so significant. Conversely, players virtually seem to have everything under their control. 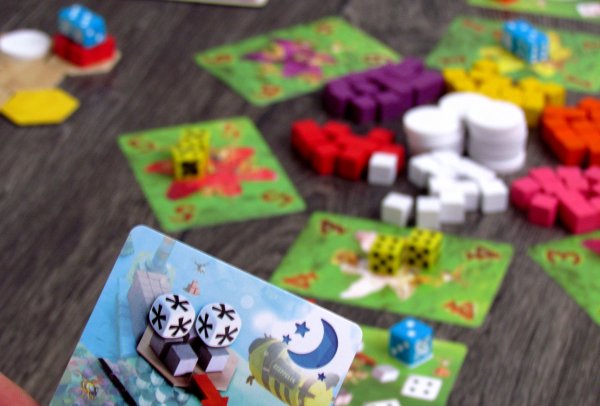 As long as any rival does not occupy last vacant position on the card for them, which brings a little rivalry. And although the game contains virtually no new ideas, they are used very cleverly. We like the most the fact, that other players can see their options – dice values – in advance and can accordingly adapt their decisions. Blocking gets a whole new level.

Under rather strange first impression, which does not inspire any enthusiasm in the players, hides great game. It is necessary to conduct all activities in balance, expanding the hive to collect nectar and attract new workers. Also immediately usable cards queens help players and can completely turn the tide of the game. 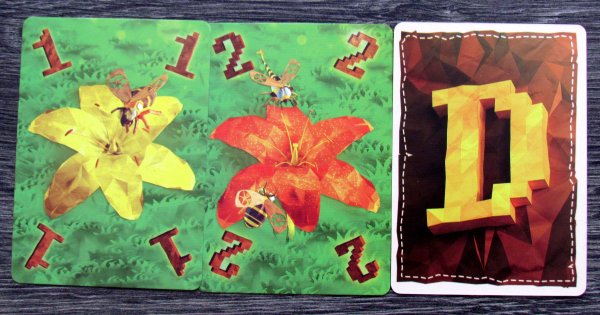 Length of the game can be set and works best in medium settings. Pleasant is the short version, while the one with the highest number of points required seems too long. Due to conflicts and struggle for the card, game works best with four, but you will have fun even in three. With lower numbers of players, some of the fields (random) are occupied for entire game, so tension remains there.

And now we get to the criticism, that can only focus on processing. Biggest complaint is the lack of help cards, because symbols on the cards are confusing and not clear, what you can do exactly with them. But otherwise the game is completely language independent and everyone can play it.

Waggle Dance ranks among great games for less demanding players. Experienced players might not find sufficient depth and initial impression of the box is wishy-washy, but the game works and knows, how to provide fun. We likened it to a terrestrial version of Alien Frontiers (review). It is easy to learn and everyone can play it, regardless of his previous experience with board games. Waggle Dance is a game, that can shine with right players and can be a good companion in the summer, somewhere in the meadow.

Waggle Dance is such Ugly between games. Not because it has a bad processing inside. When the game is setup, it looks really nice. But it is not easy to get to its charms. Initial impression simply does not work as it should, because of the box. However, if you get over it, you get an excellent board game with a theme, that we do not meet very often. Moreover, it is handled very well and you really command worker bees in their work and supply the hive. And despite the fact, that the graphics do not refer to bees very much. Game is very tactical and dice do not automatically mean a big impact luck. Quite the contrary. Everything is simple, but with plenty of options and strategies, conflicts, gains and losses. Waggle Dance entertained us much, even you should think about trip and visiting bees.