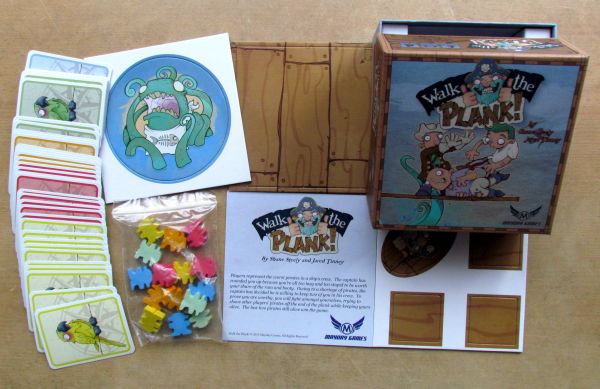 We were discovered today. Pirates stormed the supply cabin in the morning. It should be empty. But we were sheltering there. Stowaways, who dreamed of escaping from Cuba. I hoped at first, it was not too bad and that although we have beed discovered, we will get to our destination and have to work the whole route on the ship.

But this has shown me, how few do I know about man sailing under skull and bones. Their life is hard, as well as their heart. Our hope gradually faded away as we bound by rope we observed our most classic execution being prepared. They will throw us into the sea, far from any island, with sea monsters right behind. I have no relationship to the other passengers and I know, that I will fight until the last moment, for chance of rescue.

Do you remember game Get Bit (review)? You were also waiting for certain death there in the shape of shark teeth. This time, hungry maw of a sea monster opens at the end of the plank, but in addition to change in topic, also publishing company and author are different. This game is invention from Shane Steely and Jared Tinney, published by Mayday Games in 2013. Illustrations were added by Poopbird.com as create atmosphere in the game. 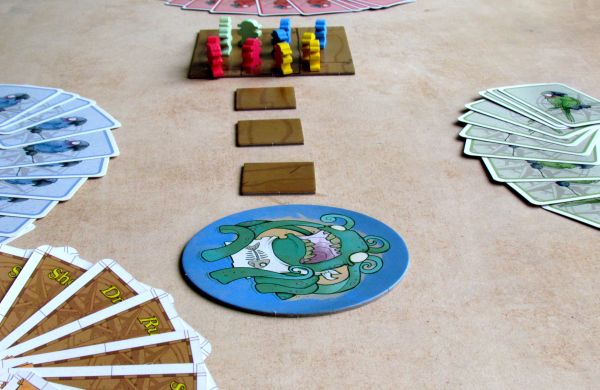 But in fact, this new deed Walk the Plank does not resemble that jaw fairy tale so much as it looks. You can influence your chances nicely, yet it retains the simplicity and elegance, that is nice in this struggle for life. But we got too ahead of ourselves, because in this moment, we only have a mysterious box in front of us and still do not know even its contents.

This square box is a little higher than usual. Inside is hiding exactly, what the title suggests together with picture of three men fighting to save their life, running away from end of the plank and one green tentacle. After lifting the brown lid, you first find short folded rulebook, but also cardboard sheet with several components. There are small square pieces of that title plank, but also a captain token for starting player.

And then there’s of course the deck with its purpose to keep you safe and another cardboard with surprisingly mannered octopus, that has a bib around its neck and is drawn on large round tile. And underneath it all begins – there are all stowaways stacked in one cabin. But surprisingly, they have a slightly different color – red, green, yellow, orange and blue. Each color composes exactly of three passengers. And they are always in the same shade as part of the included deck of cards. 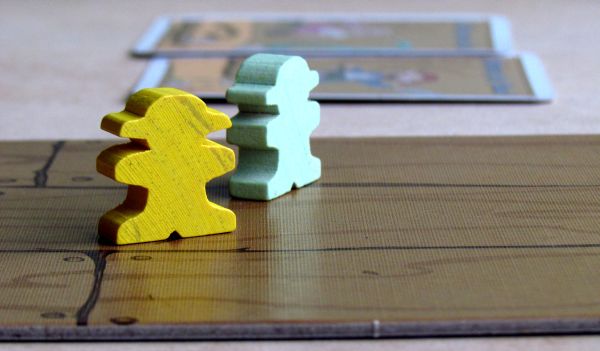 There is exactly ten cards for everyone, haveing always a parrot drawn on its back in the corresponding color. Much more important is the other side, that represents action, how card can be used. In addition to the cheerful image and inscription in English, bottom third of the card suggests (with a simple drawing) exactly, what will happen to stowaways, when you play it.

And because here everything comes down to fight for lives, it is clear that no alliance will be made here. Everyone will be here for himself. That is, why players must first choose color of their pieces, that are at the beginning standing on a large board representing the ship and safety. Beside it, players then put trio of plank parts, which will support your characters while moving towards monster’s stomach. Creatures board comes at the very end of the line. Players can now get a deck of cards in their color. But they are not forces to shuffle it, because they are completely free to choose whichever card they need.

But that’s not so easy, because all opponents plan their moves simultaneously. Thus put in front of themselves three cards indicating, what they would like to do in this round. These are played in order from left to right, creating interesting twists. Before they get to reveal their second card, situation on the table will most certainly change. 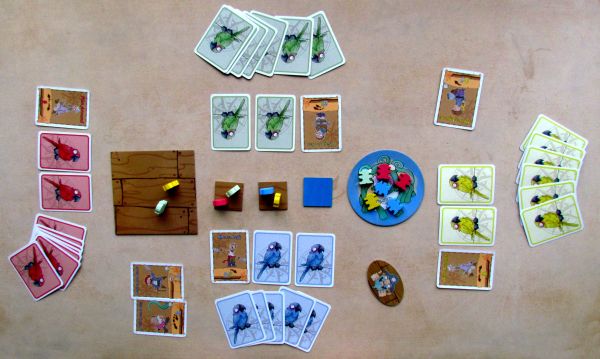 As soon as everything is scheduled, movements are sequentially done. Starting with first player revealing and playing his first card, then another player. Player always reveals a card and does exactly, what it says. Then follows another turn until everyone had a chance to play all three cards. By this time, however, situation on the board is completely different, than you expected and planned.

This is due to the fact, that players affect each other and trying to shove down your opponent sooner, than they would have chance to throw you. For these purposes, there is not only shoving forward, running back, but also shortening and lengthening of the plank. As soon as any of the characters loses plank under its feet, it is eaten. This can happen even so, that some part of the plank simply disappears before your eyes.

Game ends, when only two last stowaways remain alive. They can belong either to one color (which does not occur often) or two players, who become winners together. Their lives are saved and spared, because pirates have had their share of fun already by watching this fight. And who knows? Maybe they will get bored together and will force you to step on the plank again. 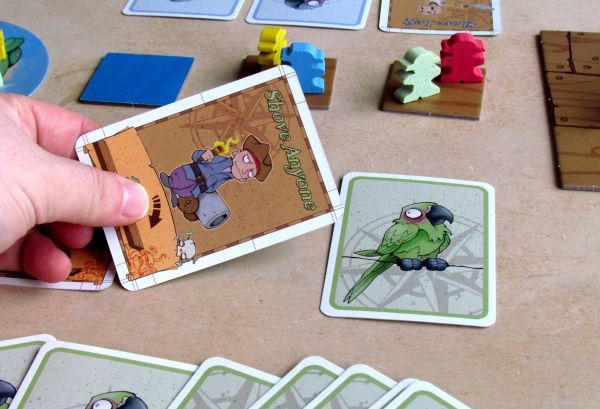 Walk the Plank is a simple fun game, that brings not only fight for your lives to the table, but mostly laughter and fun (often coming from each other misfortunes). But you must not take this game seriously, because it’s just such a friendly teasing and relaxation. Although sometimes, it comes to some vengeance, when you treat someone badly.

Often players are can have a chance to choose, who will be the winner and who ends up in the digestive tract of the sea monster. And here usually pay off your earlier doings, when you chose previous actions with stowaways of this player color.

The most important thing about this game is the secret planning of cards, which can affect absolutely everything and also completely bury your chances. You are not only trying to play, what you need, but you often need to use some rescue card just in case. The most fun but remains in rounds, where two or three pullings of the plank appear and suddenly half of your pawns is dead.

Unfortunately, it is associated with a significant share of luck too, because you often simply waste time in part of your turn or cannot do, what you originally intended. But this is just a part of wicked play and it does not hurt experience in any important way. In contrast, you interpret unpredictability of the situation (and possibly even a loss) with humor, mainly due to the speed of the whole game.

It is not so easy to get distracted, when you should be constantly thinking about the need to postpone the cards with a skull during the game. These cannot be used in two consecutive rounds and should remain on the table for one. Sometimes it happens, that you do not notice the skull, take it back and use it in the next round. This gives you an advantage, because these actions are usually much stronger and have more impact on the game.

Walk the Plank is very interesting game, that usually come down to two winners. Therefore it makes happy even those players, who otherwise do not win too often. Of course, the chance for survival is different in the three and in maximum five opponents. Yet even in higher number of opponents, it does not have a significant impact on the length of the game and you definitely like to repeat the contest again immediately. Fortunately, game is still fun in three players, because board still contains nine sailors, which is enough. 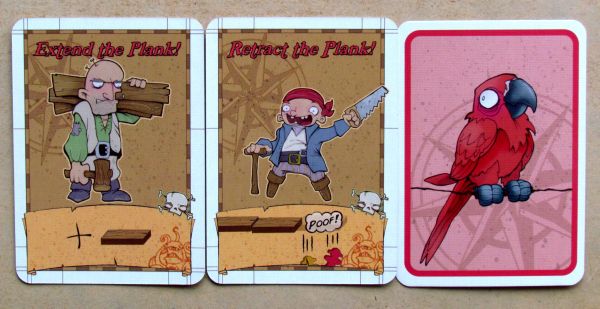 Processing is nice and simple. Boards rotate, when you retract the plank, because the other side has deep blue sea drawn on it. Icons on the cards are clear and there is no problem to understand them, even when you do not speak English.

Walk the Plank is a quirky doodle, in which you will have great fun, if you are looking for game, that is by no means serious. But you must not mind, that you are not completely agents of your own happiness, because only in combination with cards of other players, you can ultimately succeed.

+ secret cards planning
+ hilarious fun
+ you have to watch, who are you picking on
+ enough cards to do everything you need to survive
+ great with all player numbers
+ quick game time

Walk the Plank is a tense party game, where you are trying to push your rivals off the plank sooner, than they succeed in doing the same thing to you. Everything is about survival and right timing of cards. But you are planning three of them every round at once and they are evaluated one jointly after the other. This means, that situation will be different, than as you imagined. Cards offer lots of interesting options, which involve pushing, nudging, running, but also changing length of the plank. With retracting it, you can doublecross your rivals, but also yourself, when someone does the same. And you can quickly end up in stomach of a giant sea creature. Because in the end, there is some kingmaking in progress – rivals can choose, which player should be among winning team, you have to watch carefully, how you treat enemies during the match. Game is tense until the very end, but moreover its fun and extremely quick. Thanks to this, it will please any audience whatsoever and makes Walk the Plank a great member of any collection.