Review: War with the Evil Power Master – about the fate of the universe and more 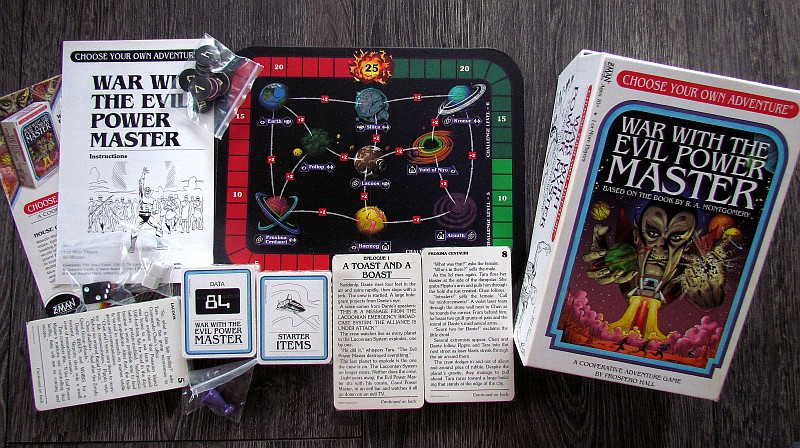 Destruction of planet, galaxy and space. The aim of the evil Power Master is nothing smaller. But most races will just sit quietly on their planets and wait for the end, because they do not have the technology to face the destruction of unprecedented proportions. They might even not know its coming. Fortunately, there are heroes from the planet Lacoos, who do not hesitate to put their lives at stake for the future of the universe.

After the thrilling House of Danger comes second installation from the Choose Your Own Adventure series, whose concept and content was prepared by Prospero Hall. The game was released by Z-Man Games in 2019, and in the same year a box arrived on the shelves of Europe’s stores thanks to the distribution of Esdevium Games.

From the box to the players breathes beautiful and impressive feeling of the eighties. Flash Gordon-style graphic will accompany us throughout the game, but you won’t enjoy its wild colors. Everything on the cards is strictly black and white. The only exception is the game board, which is placed by the team in the center of the table to start the game. They place cubes at the beginning of its two scales (evil power master and radio signal) and then randomly spread round signal tokens on each planet. 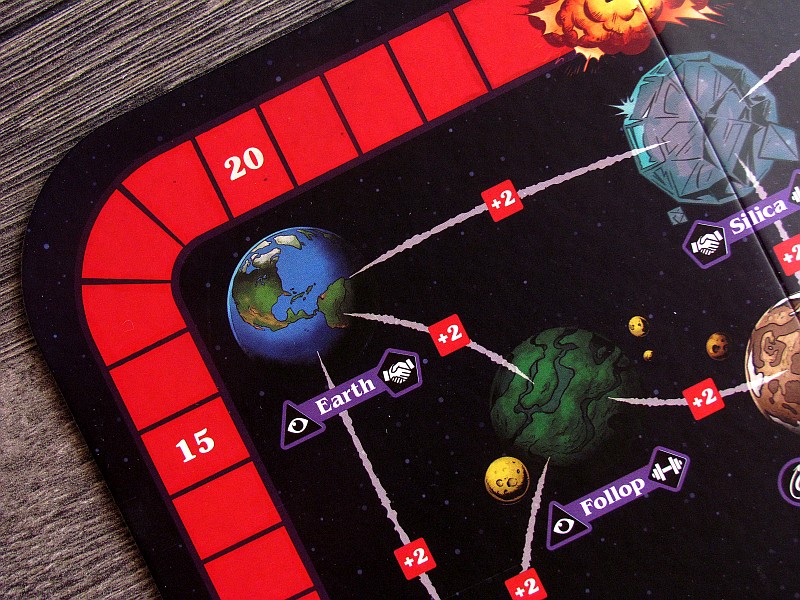 Players then equally split four heroes, who must always participate in the game as a complete team. Each character gets one random starting item. The dice and the ship’s figure remain aside, as will the unshuffled decks of a large number of (nearly 300) cards.

Start of the story introduces the player to one of the planets and he will have to overcome its pitfalls. From that moment on, team is at the mercy of action and their own decisions. Individual cards bring them not only mandatory tests, but also decisions, whether to wander off and try to finish some side quests. These can bring great benefits, but also can be source of real troubles.

Whether they succeed or not, the card is ready for it and presents some closure. But space passengers can still be killed. They just can have a bit of bad luck and that’s it. Sooner or later, players are forced to travel between planets, and this is where the Evil Power Master (EPM) token shifts. 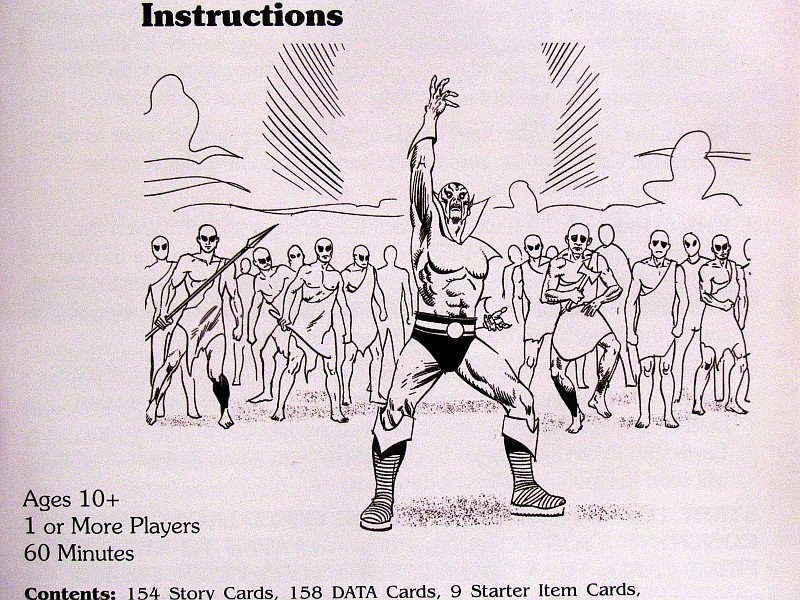 Heroes test their skills in different categories, with only one member having some bonuses from each of them. They can use items during their fulfillment, whether they are discarded or reusable. In doing so, the team can always choose a representative to face the challenge. But whether he succeeds or not, he becomes exhausted and it is up to the others to finish the job. Only when all of them take turns in performing some sort of test, they get a chance to renew their strength and all can partake again.

For a successfully explored planet and finding clues about the main villain, players get new points of signal strength. They move the pointer accordingly. If the team manages to reach 25 sooner, than the bad guy on his scale (EPM), a final battle is launched. It will decide the fate of the galaxy.

War With the Evil Power Master is based on the same mechanism as the first game, but it is really quite different. Players have a map and a deck of thirteen cards for every planet. This brings pros and cons. First of all, the plot does not surround as much mystery as the House of Danger. On the other hand, the structure also helps the game, because players have a slightly different choice. 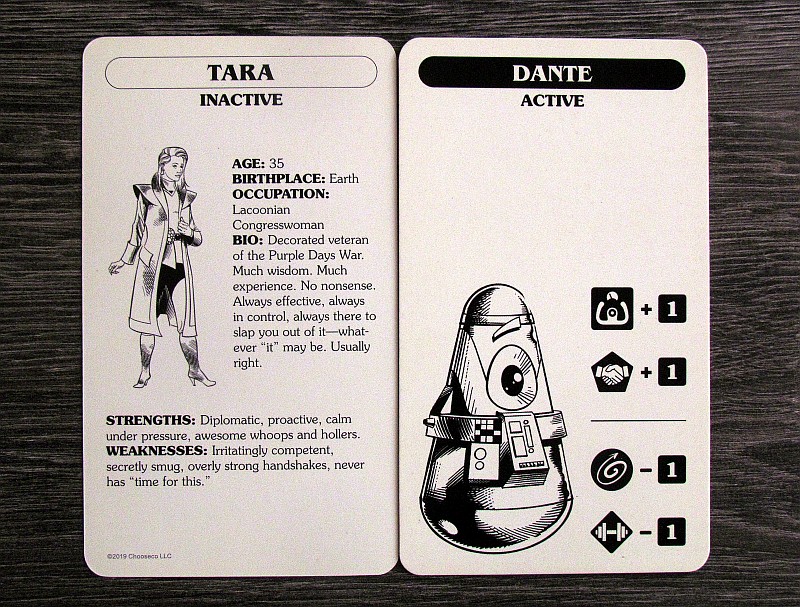 So while in the first game, you wander in circles and go through the same places more times, this time there is a lot of paths to choose and conversely you do not, know which direction to go earlier. But each planet brings some clues. When choosing, players can use the hint in the form of the majority type of task on its surface together with token, which indicates amount of reward points, that can be acquired there.

As the game progresses, the difficulty of challenges also evolves. Even the same tasks may not be equally demanding in two games, if players arrive much later. Depending on the position of the signal indicator (= how close the players are to victory), the individual calls receive higher requirements up to the obligation to roll six (including any bonuses). Players become stronger, but the game does not seem to be easier for them later. The experience remains very well balanced regardless of which planet you choose first and that is great.

In the opening game, there is a great element of freedom and discovery. Of course, with repeated play, this feel of new recedes into the background. Mechanisms are really basic, but all of this makes up for a story, that is old and full of humor to entertain. 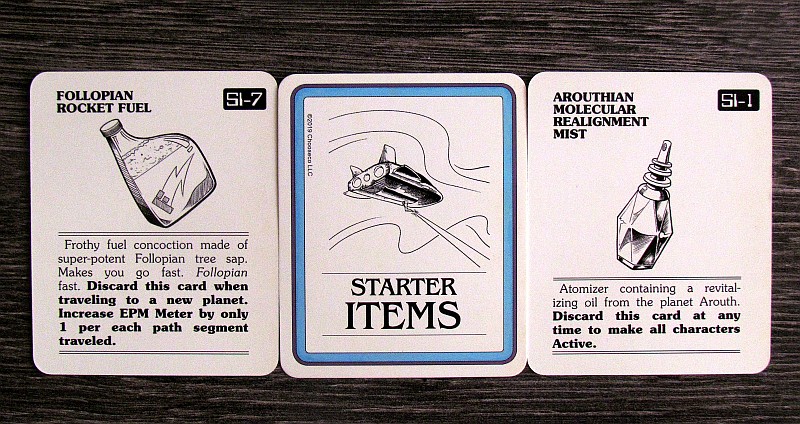 The choices themselves have mostly unpredictable impacts, so players feel pretty uncertain about their chances. This of course also supports the inclusion of the dice for a number of decisive moments. At the same time, the pace goes forward all the time and you will arrive within one hour at the end of your journey.

Compared to the previous game, there is an increase mainly with regard to replayability. Players are not able to visit all the planets by far in one game, so they have the motivation to return and even explore some of the already visited planets from other angles. The decisions are still guiding the participants. The ideal number of players is four, each with his own a hero. But entertaining is also game for two or even solo endeavors. 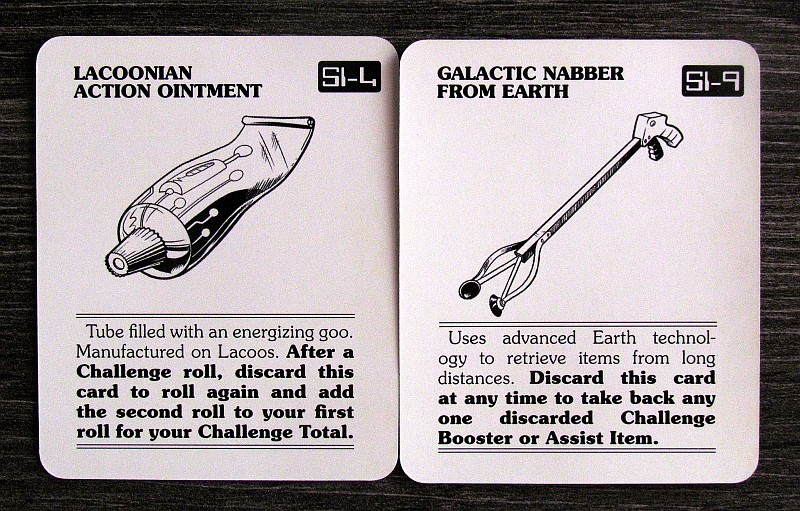 War With the Evil Power Master will deliver fun to your address in the form of your own adventure. And with all that, especially by chance and unpredictability. Players may face rapid death, but they may also wander the planets one after another. The good news is improved replayability, but has been replaced by other problems. Mostly lack of atmosphere. Even so, War With the Evil Power Master is a really interesting adventure.

- chance
- the atmosphere is weaker than the first game

War With the Evil Power Master is a fun cooperative game, that unfortunately failed to transmit atmosphere and excitement to the players. Even so, exploring the planets remains entertaining, also because players do not manage to explore the surroundings completely in one game. They are running out of time to destroy the galaxy. They has to cope with it, find clues and save the world. The game is random, but brings plenty of humor and exploration. Fights are simple, but they are controlled by coincidence. War With the Evil Power Master is fun as a whole, but it will have the greatest success among book lovers of Choose your adventure type.