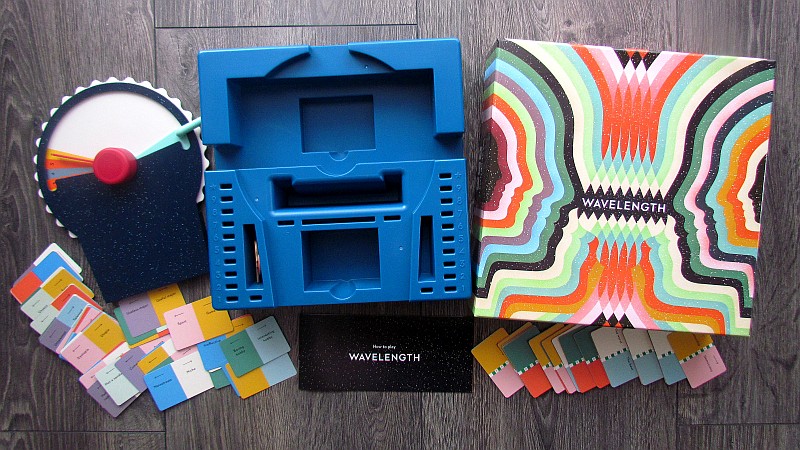 I’ve always had that ability. Look at people and know what they think right away. Magicians call it reading thoughts, but I have a different name for my skill. I always have the feeling, that I can tune to the other’s wavelength, and then it’s suddenly easy.

For all participants, Wavelength will want at least a bit of the tuning to the teammates’ wavelengths, so they can communicate with each other with just a pinch of words. Created by a trio of Wolfgang Warsch, Alex Hague and Justin Vickers, the game was published primarily due to a successful campaign on Kickstarter. This is a novelty from an unknown Palm Court company and the game is distributed throughout Europe by Esdevium Games.

The game impresses with its box, dominated by colored lines. On the lid there are identifiable heads representing two teams that have just the toothed medium of the rippling air carrying sound between them. Inside, a large plastic instrument is waiting for the player, the upper part of which is formed by a large swivel wheel. It has several layers, at the bottom is a white surface torn in only one place by several colored (scoring) slices. On top of that, there is a blue rotateable cover and at the top is a red positionable needle. 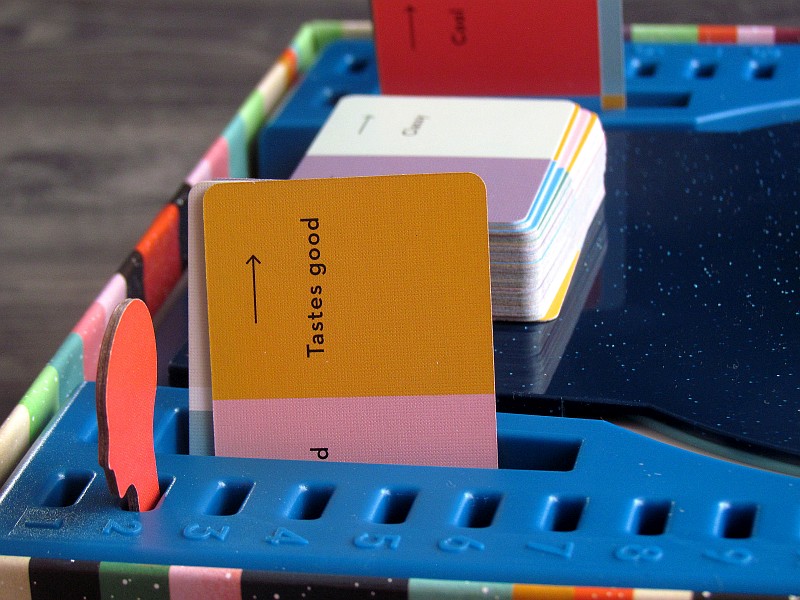 During setup, players will be divided into two teams that will compete and each will have their separate score scale. The bottom of the box with notches serves as the base for the whole game. Both teams set their pointer at the beginning of their point track and prepare together a shuffled deck of opposite cards nearby.

One of the teams starts the game and the other gets one first point to compensate their disadvantage. However, one of the team members will become a medium for this round. He will try to pass an idea to his partners. At the beginning of the round, he randomly selects the position for the color scale by turning the plastic wheel. Small slices occupy only a part of the total 180 degrees and are on different position each time. This must be done secretly, under the closed lid (second layer) that hides the position of the slice on the scale. Only this player may now peek at its position.

Now the medium takes one card from the deck and finds two words – opposites – written on it. It is up to the player to come up with a word, that feels to be just where the scale is drawn between the two extremes. The other members of his team must now analyze the word and try to agree on the position, where the red hand should be. They are trying to hit the colorful pie with the pointer without seeing it. 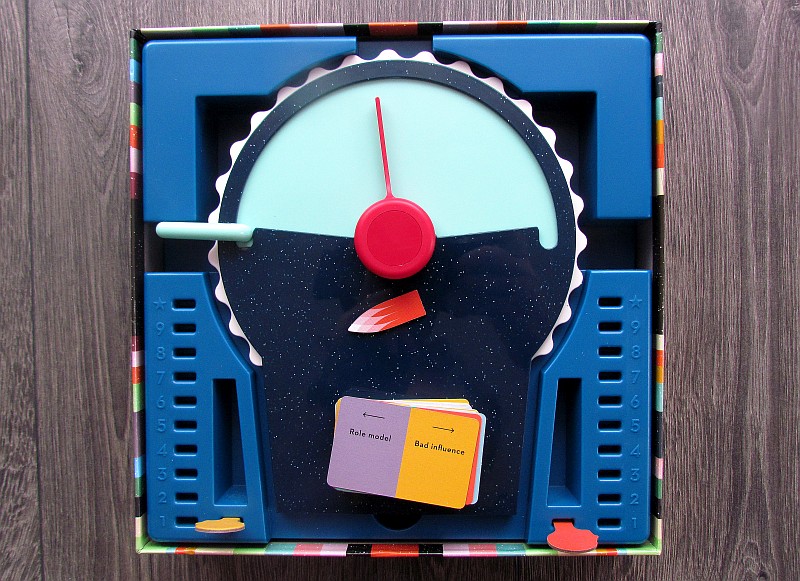 But within the turn, the other team must also pay attention. Even after the guess is done, the secret will still not be revealed, but instead the opponents will get their changce to score. They try to guess, whether the correct answer lies to the left or to the right of the original tip.

Only then can the medium uncover the screen and reveal, who was right. If a team hits a slice, they can get points. The closer to the center they are, the more points (from two to a maximum of four) they get. However, if the guessing seekers have not been hit the jackpot, the other team has a chance to receive one point, if they have guessed the direction.

Both teams earn points for their achievements. And the final goal is ten points. But if the team scores a maximum of four points from one round and even then remains on second position, then that team gets a straight chance to play again! Thus, even a seemingly lost game can turn into a triumph. The first team to score ten points celebrates victory. 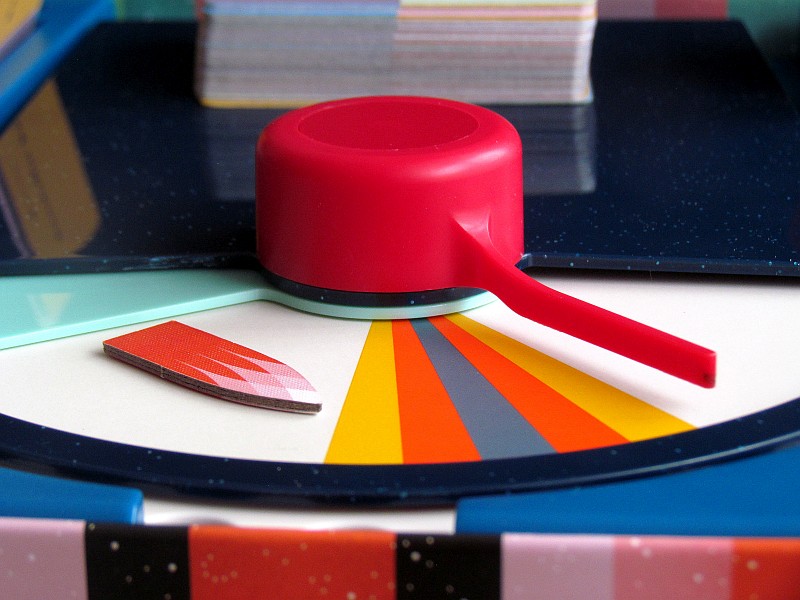 Wavelength is a very original team narrative game, in which you do not enjoy the story or theme very much. Usually there is only one word, followed by a flood of others – arguing all team members and trying to interpret idea of the medium.

That player has an enormous weapon of arbitrary verbal expression on the scale between two extremes at his disposal. Sometimes it seems simple, sometimes difficult. The player knows exactly, where the slice is and whether he should rely on car analogy between speed and slowness or surprise his teammates with the speed of light.

The game puts solid demands on all participants, because each participant must really try his best. Nothing happens here due to chance, but only to the right skills and guess. It is not about happiness (although it may seem so), it is simply a skill to describe a certain level appropriately. And here’s where the team game comes in. One player will do better, the other will struggle, but you can only win as a well-coordinated group. 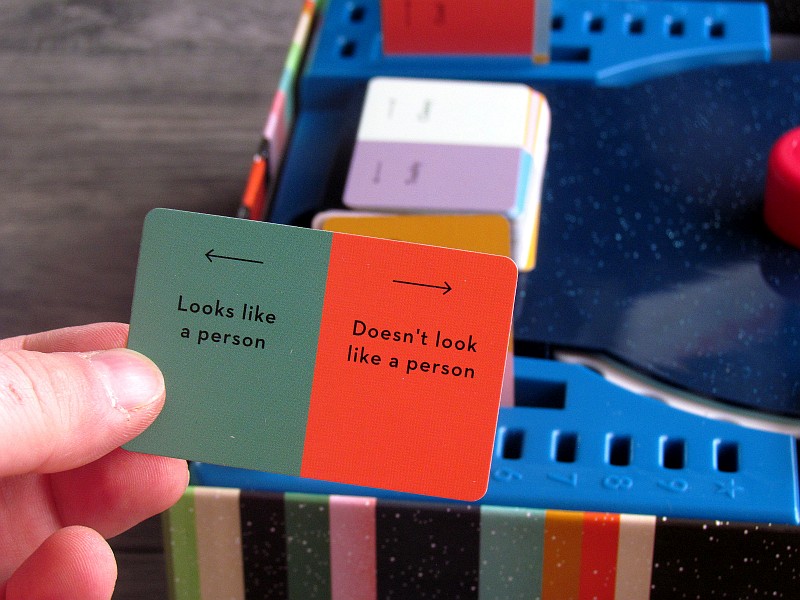 While in other similar games (such as Dixit), most of the weight lies on the team of guessing players, the medium itself is no less important here. Choosing the word is absolutely crucial to success, and if someone does it wrong, the second phase can no longer correct anything.

A great plus of the game is simplicity. You will explain the rules in two minutes and do not have to prepare anything complicated, because you just leave everything inside the box as is and start playing. This is how all party games should look like.

Sometimes the slice gets all the way to the side. In this case, of course, it is much easier to guide your teammates. And here the chance comes into play, because the draw of the slice position is all about randomness. 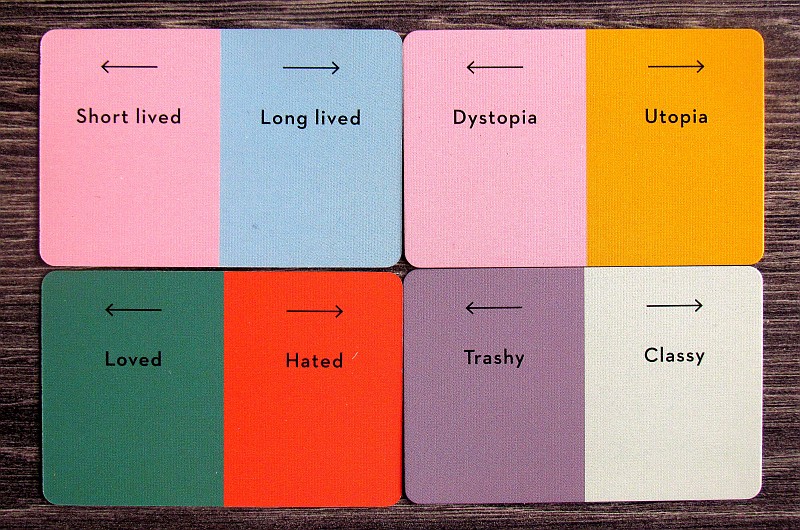 Replayability is extreme. This is not only about the number of cards, but since the target slice is always located elsewhere, the hint must be different, even if you get the same assignment. There are plenty of double-sided cards and their repetition is far from being a problem. On one side of the card you will find extreme assignment, on the other a little restrained ones.

And you know what? The game lasts a reasonable forty minutes. If you play in teams, then its reasonable that every team has at least three members. So arguing teammates must make a deal. Higher numbers also work. Surprising, however, is a cooperative variant for two, in which it is only about points. But the fun is the same, because all the guessing on the scale is still there.

What is a bit of a problem, however, is the significant language demands. Some terms will only be known to advanced speakers. On the other hand, extremes are public, so players can read and translate them together. There is no reason to keep secrets with these words and the rest of the game is already in your native language. So in the end, we survived this danger as a whole. 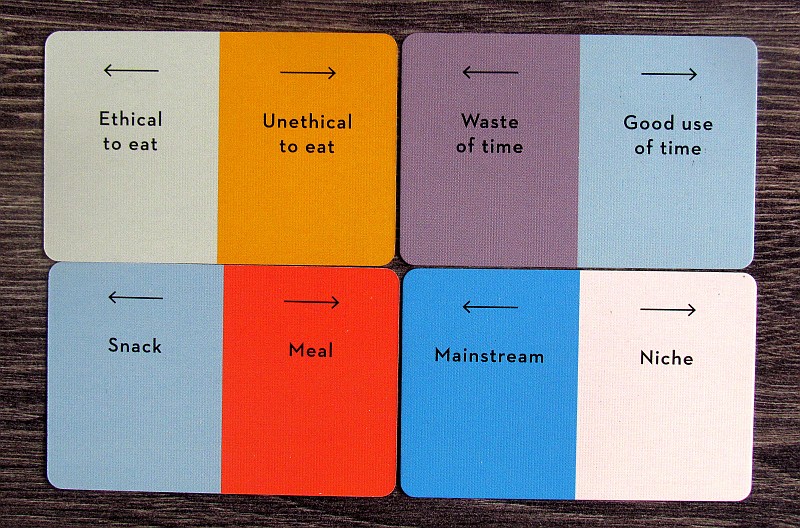 Nothing prevents Wavelength from becoming our new editorial party hit, and that is exactly what happened. If you like vocabulary and searching for the senses in one word, you will simply love this game! Wavelength is an absolute hit!

- the slice can be in extreme position

Wavelength is a vocabulary party game, that is also much more. You set it up in a minute, explain it in the next two, and then you can play. One word needs to be in the right place between the two extremes. And teammates must correctly guess this position. Only then can team celebrate the earned points. Original processing, great variability and fun. Wavelength is the right party game for the beginning of 2020.