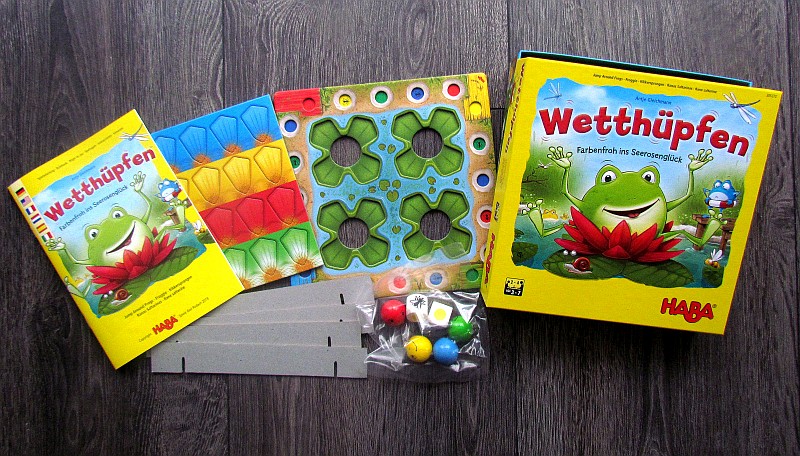 We are small, but that does not mean, we should be less hungry. So when flying flies fly above the surface, nobody misses his chance and tries to catch as much as Possible. There is never enough food, because you never know, what tomorrow will bring. We need a quick tongue and a little luck, because these little creatures are really fast.

Players will also be jumping above the surface in the board game Wetthüpfen, which got the name Jump Around Frogs in English. This is a game from 2019, created by Antje Gleichmann under the production from HABA company. The illustrations were taken care of by Oliver Freudenreich.

Players will find a number of round jumpers in the yellow box, some of which can be seen on the lid. They’re really ballish creatures. Before the first game, it is necessary to prepare the bottom of the box as gaming board with the help of cardboard strips, on which the illustrated game board is then placed to provide environment for the game. A route runs around the entire area and four water lilies are formed in the middle, each with four leaves of the same color. Individual players should choose own frog figure according to their favorite color and then sit near the same colored corner of the board. 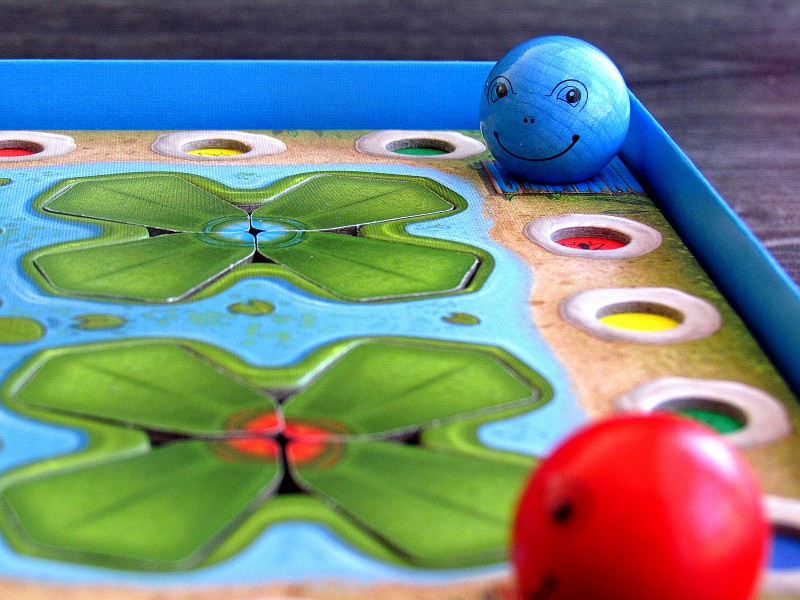 In the game, players alternate on the turn, in which they always roll the dice and must then move on the track based on the results. If a dice is rolled, the player always moves to the nearest square of the same color clockwise. In doing so, he skips positions, that are occupied by other frogs. But there are also two pictures with a fly on the cube. In such a situation, the character can move even further, to the position where the first fly is sitting.

For each whole round, that a frog can run, its owner can turn one flower petal with its color up. And when someone is able to turn the fourth leaf to complete the flower in his color, he can settle the frog in the middle of the water lily and let it bloom. This player immediately becomes the winner. 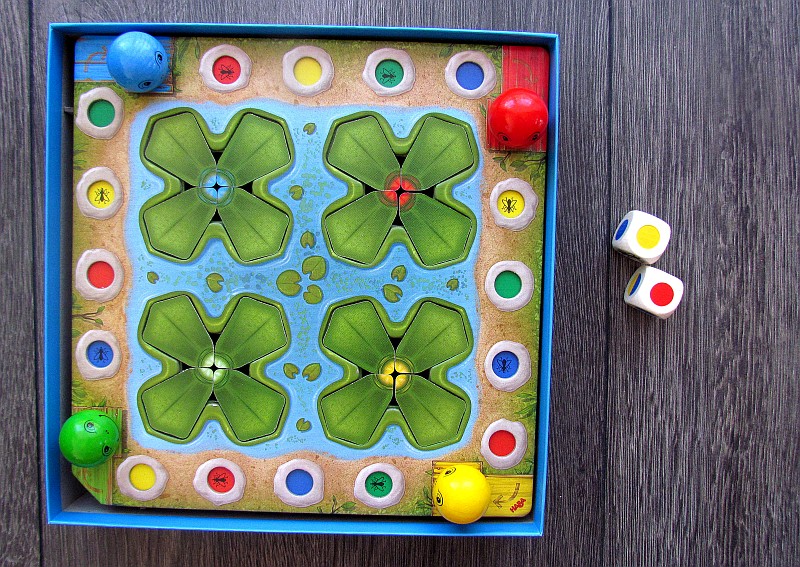 Wetthüpfen is a hopping game for the youngest of children, who will not mind, that they just jump forward based on rolls of the dice. Nothing more besides counting pips will happen here. Children just do what the cube tells them. And they enjoy it pretty much. Well, at least the little ones around three to four years, because at the same time, they train their counting and especially color recognition.

Fortunately, the author has not forgotten even slightly older children, who are just starting school attendance and would like a little more exciting content. They can use both dice, that are in the game at once. After they are rolled and show (usually) different colors, order of their evaluation is purely up to the player. In addition, the second cube has sides, that share two colors. Children can choose the one, that suits them better. The right combination and order can significantly affect how far the frog will catch up in a given turn. 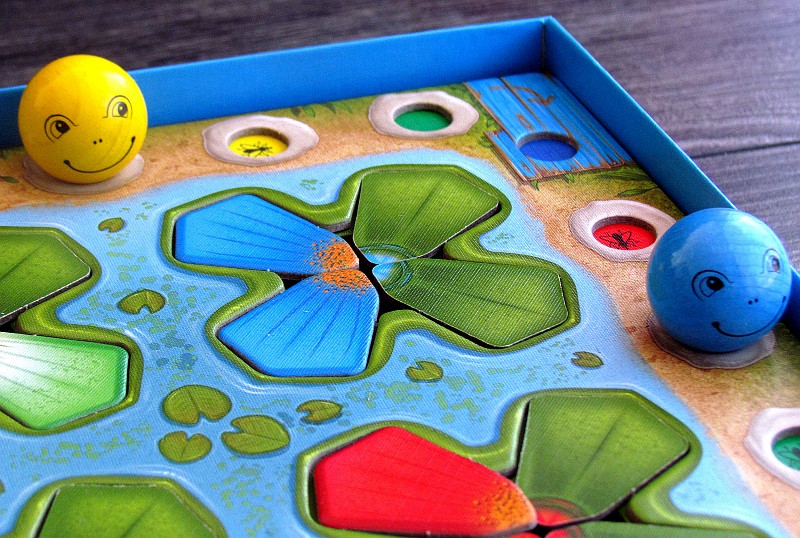 Two levels of gameplay is a great approach, because children will have fun with the game for several years. In doing so, the main processing itself, which looks cute from the beginning with round frogs. Only at the end of the game, players can appreciate the true inventiveness of the author, because as the frog loads the center of the flower, its leaves will rise. In this way, the winner will literally celebrate his triumph and receive a well deserved visual reward.

The game is of course not difficult and therefore also not long. Fifteen minutes will be enough, regardless of the variation you are currently playing. In more players there is more significant jumping over other players and it is possible to use the position of opponents more to your benefit. But the game is fun regardless of the number of participants, because it’s not the most important thing. 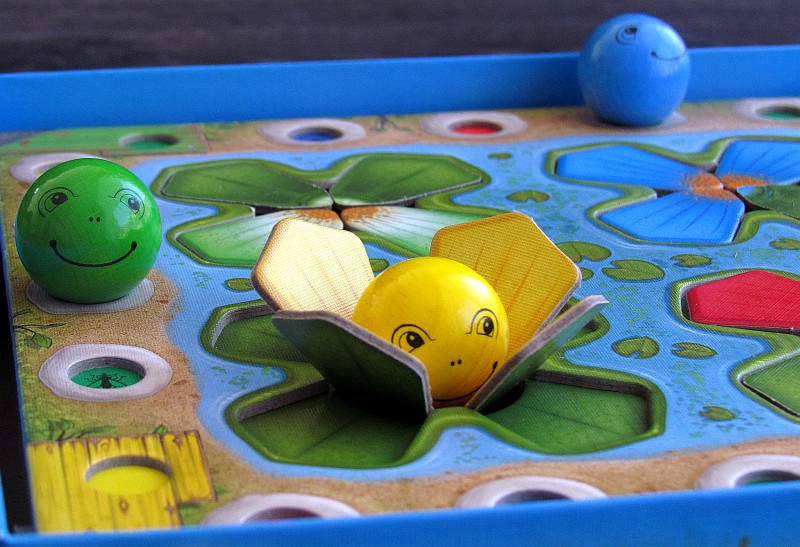 Wetthüpfen is a beautiful game for young children, who should learn colors and counting with its help. But once they learn all this, they don’t have to set the game aside. Instead, they will advance to the second level and suddenly have some tactical and combination options at hand. Thanks to these two levels and beautiful processing, the new Wetthüpfen game is an amazing gift for all young children.

+ luxury and smart processing
+ from three years up
+ two variants

by Dušan on 20. 04. 2020
We are small, but that does not mean, we should be less hungry. So when flying flies fly above the surface, nobody misses his chance and tries to catch as [...]
Comments
Leave a reply