by Dušan on 11. 08. 2014
0
previous article
Review: Sherlock Kids - children's detective in a hat
next article
Review: Madeira - trading under the Portuguese flag
Contents 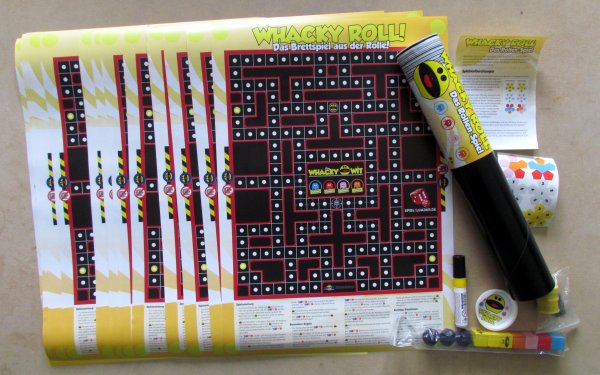 “You’re going to have dinner tonight at Pac-Man’s?”, asked green monster the red one. “Beep-Beep-Beep-pi,” was the reply. Both strange monsters began to laugh, and their lower lip started to wave. If we did not knew, what was going, we would maybe believe, that this is an ordinary gathering with friends.

But everything is different, because little yellow fellow with a big mouth is running a restaurant. And these monsters steal him his goodness every day. And we are not just talking about yellow balls, but also a lot of other treats, like fruit. It repeats again and again every night.But even Pac-Man alone is not quite the nice guy as we all know him. When he gets angry and pulls out his fangs, unexpected visitors can be consumed as a whole.

New board game coming from Norman Sommer is called Whacky Roll and enabled us to live through, what we’ve always wanted. Being yellow and round. And not only play with famous yellow ball of fur, but also become his four arch-enemies. This game is a smaller version of a large wooden game Whacky Witt and it was published as a transportable variant in 2013. 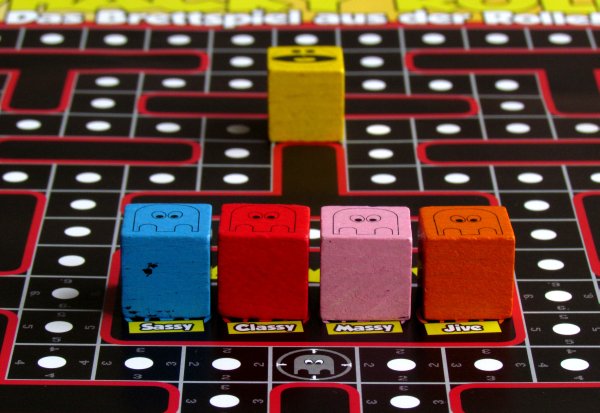 Entire game is hidden in an oval package. Box itself is then replaced by a tube, that has a yellow-black color with a portrait of Pac-Man, who is in the picture looking at you. In his mouth, there are no teeth, so it is unclear, how should he be swallowing that quartet of monsters waiting for him out there.

Inside the package, total of 25 game plans are rolled up. And because they are double-sided, they are allowing you to spend a total of fifty exciting games without any need to look for their replacement. But we’ll get to that later. Now we are interested in what inside of the tube shares with us beyond A3 size papers.

There’s a pile of colored blocks representing quartet of monsters (pink, red, orange, and blue) and three Pac-Mans. Each of them wears a printed picture, that will probably fade with time, but that is no issue here. Tube includes also square magnets, that can be stuck on the characters to create a vertcial fun out of it. But the game needs even a trio of dice to work well. At the beginning, all three of them look empty and players must put pentagonal stickers on them. Dice are dodecahedrons. The game comes with one special marker, four magnets to attach (hold) the plan and rulebook with just a little amount of text about the actual gameplay. 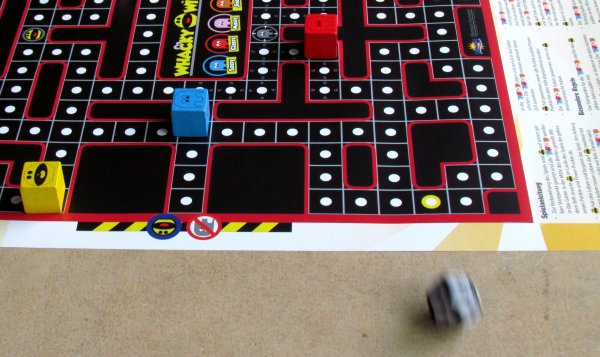 Playing the game is really simple, but adversaries must first divide their roles. One will play for yellow Pac-Man, while the other will take on the role of four monsters. Players unroll game plan between themselves. A good hero begins his journey at the designated starting point, while all the monsters are caged for now. For them to start hunting Pac-Man down, their owner needs to roll a six on his die.

In the basic course of the game, both players alternate regularly. When dots eater is on the line, he uses only yellow numerical cube. Its outcome will determine, how many steps can this character move. Player, who is controlling it, can change direction, whenever he pleases, and he can even turn 180 degrees, just like he was playing a videogame.

The goal of Pac-Man’s sprint around the board is to consume all the yellow dots. Player therefore has a marker used to blacken all the dots, which his hero has passed over. The board is therefore gradually emptied (or you could say filled with darkness). 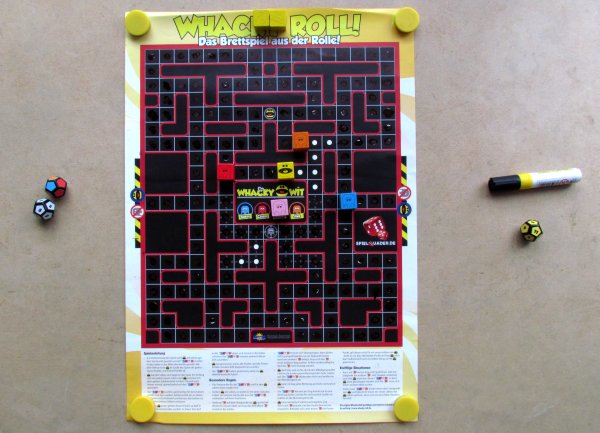 But then come his rivals certainly to their turn. He rolls two of his dice. First one will choose, which of the four characters can act this time, by showing one of four colors. Second dice will determine the number of steps, that player can make with selected creature and also in any direction, but without turning backwards while moving.

Goal of these bad guys is simple – to catch Pac-Man. All it takes is to be touched by one of the creatures and in that moment, yellow fellow loses one of his three lives. You can easily see his status at all times, because there are a total of three yellow figures in the game. Each of them can only be used once, until its caught.

In some corridors of Pac-Man’s house, there is a special point. After their eating, a bonus mode follows. This changes the balance of power completely. Suddenly, Pac-Man is the one, who is chasing monsters. He has three consecutive rolls of the dice at his disposal, to eat bad guys and colorful monsters have no chance to defend themselves. Each swallowed creature goes back into its cage and its master must first set it free again to participate in the hunt. 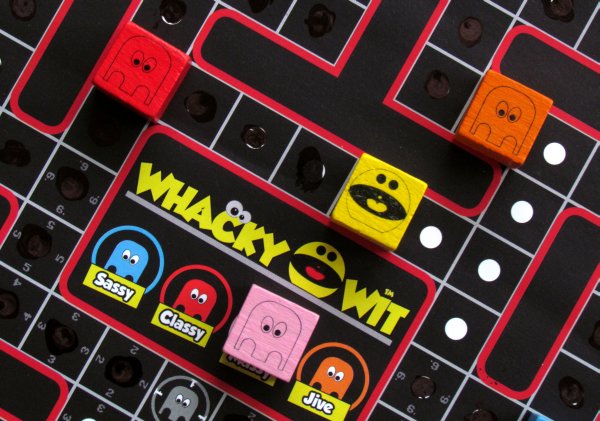 It is clear, that the game can end in two ways – victory of one or the other. Pac-Man loses, when he is run over a third time in a net of colorful monsters. Or vice versa, when he appeases his hunger and devours all the dots on the board, he can celebrate victory. The side, that is able to meet its target first is winner of the match.

Whacky Roll takes original and still popular fascinating game, where yellow ball is running around and chasing several spirits across its labyrinth. It sounds so simple, that transforming it into a board game seems virtually impossible. But Norman Sommers did it and made Whacky Roll great fun for two players, we can tell you that already.

Now the number of opponents clearly ties the game, but at the same time, it adds the perfect touch of rivalry. The predominance of players is spilling over from side to side, because everything depends on rolls of the dice. And here lies the greatest strength and downside of the game. If you are uncomfortable with luck dependancy, then you are probably not gonna be thrilled by how this game is played. 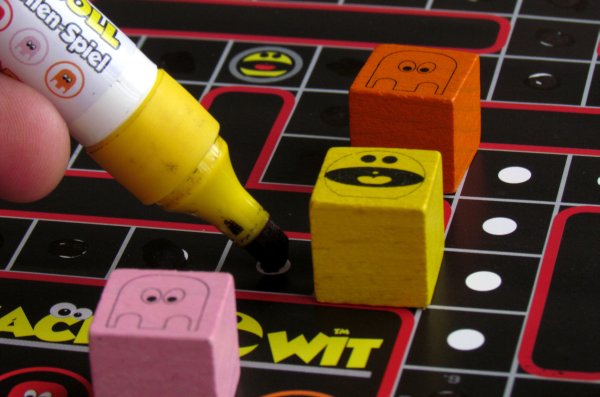 But all others will be impressed, how atmospheric a chase around a board can be. At the beginning of the game, with lots of dots on the plan, Pac-Man has a clear advantage. Monsters are running around confused and could count only on luck, that they meet this yellow glutton. But as the game moves into the second half, suddenly everything is vice versa. Pac-Man has no longer enough dots to hide his true plans and situation will become easier for the other player.

Game is exciting until the last moment and neither player has absolutely nothing certain, before its over. But what brings completely amazing moments into combat are those bonus spots. Suddenly Pac-Man need not to worry about his life and can really chase all these ghosts from the board. He can use this advantage to banish them from their carefully selected positions. This is particularly useful in the late stages of the game, when only few yellow dots remain, so you should save these bonuses.

Entertainment is guaranteed for both sides, but each requires a slightly different approach. Yet duel takes no more than thirty minutes, during which you will enjoy a decent chase. Magnets give the game an entirely different and unprecedented opportunities. They make it possible to mount game plan on a fridge and game can be played even remotely (for example, every morning when leaving for work). You can see innovative thinking of the author in here. 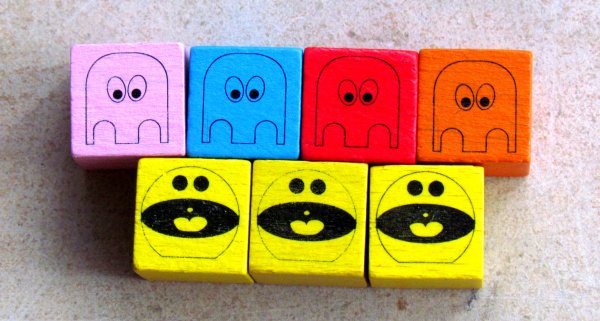 Processing is absolutely precise. Game plans accurately translate atmosphere of the original PC game. Figures made as cubes look elegant and magnetic additions add uniqueness. When you run out of plans, you can download new ones from publisher’s web site and print them out. But its still a smaller version of the large, wooden game, that is not only beautifully crafted, but also marked with a blazing price tag, that makes it primarily a collector’s item (just look for Whacky Witt).

Whacky Roll is a beautiful game of Pac-Man on the table. The atmosphere of such a hunt for polka dots is captured perfectly. Everybody should also appreciate processing and simple rules, that brings the game closer to children. Whacky Roll is a very pleasant surprise, true competitive experience for two and a thrilling game.

- luck decides a lot of things

With Whacky Roll, you move into a maze full of yellow dots. You become a hungry ball, that is chasing a few ghosts across his labyrinth. But the player can take even the other side under his control, it depends on his choice. This board game takes the popular PC Pac-Man game, puts it on the table and works on all fronts. Options of both parties are a little dictated by luck, but this does not diminish the atmosphere and experience. Voracious ball has the opportunity to defend himself, if he crosses bonus spot and may surprise colorful creatures. But its still keeping enough tactics. Gme offers great fun for two, which is perfectly suited even for playing with children. Whacky Roll is an excellent game, which is dominated by simple rules, magnetic processing and emotional experience, which is always the most important in the end.