Review: Whats He Building In There? – on your way to The Doomsday Machine 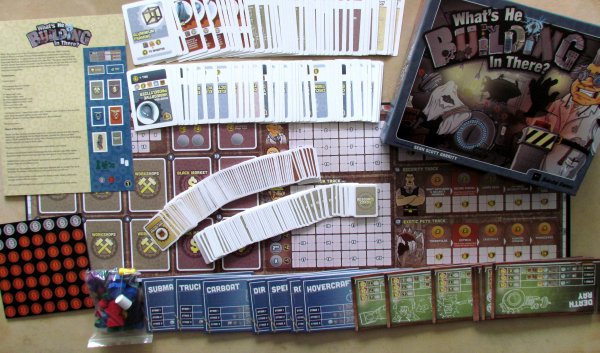 I have ve always dreamed, it will be me, who will destroy the whole world. Ever since diapers, I made objects to spread destruction. Sizzling rattle toy and self destructing buggy were just the beginning. Only when I came of age, time has come to use all my knowledge. I went to London, which is the basis of all good villains. And as soon as I arrived, a message about a secret contest of villains found me doing something evil. Whoever destroys country or will be closest to it, wins..

And you should be sure to subscribe to competition too. Board game Whats He Building in There literally invites you to do it. Published under flag of Baksha Games, thanks to many players, who have supported its development on the site Kickstarter. After production problems, it eventually got to its new owners, and one arrived to us as well. Author of this game is Sean Scott Garrity.

Role of mad doctor is waiting for players, as they see on the lid with a crazy haircut standing in the foreground of inventions. There is a button “Never ever do not press”, which would probably begin immediate destruction of the Earth. Fortunately it does not work yet, so we still have time to quickly peek into the box and look at what author has prepared for us. 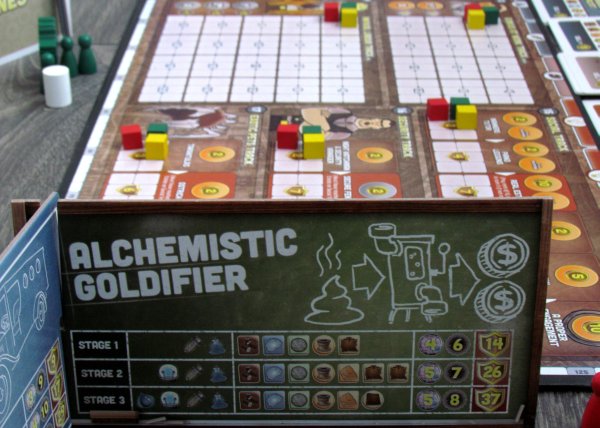 Main one is the game board, which is very long and provides plenty of space for cards, but also for positioning pieces. They are at the bottom of the box, made of wood and do not look not exceedingly beautiful, without any mad scientist look. Thus, standards of wooden figures. You would never guess, that it is doctors with the power to destroy the entire planet and their henchmen. This all in different colors.

But game board is not alone, because of hard cardboard are also made machines of destruction and escape plans, that doctors have to follow, once the plan is completed. Scotland Yard will be ashamed once more, when you gloriously disappear. These boards have notches on one of their sides, and can be always connected in pairs, so they create a screen for the game. On the front side, player finds raw materials requirements for completion of the first, second and third phase leading to the destruction of the world or completion of the escape machine.

And we simply can not do without cards. Small represent resources and there is 175 of them and they come in six types (such as glass, wood or iron). With their help, doctors may finally retrieve partial inventions they need on the road to success.Those parts are represented by individual cards, that are wearing not only a portrait of discovery, but also requirements for its completion. There are also different background color – a lighter and darker, by which you can tell, which player was the first inventor of the subject and who only copied his idea later. 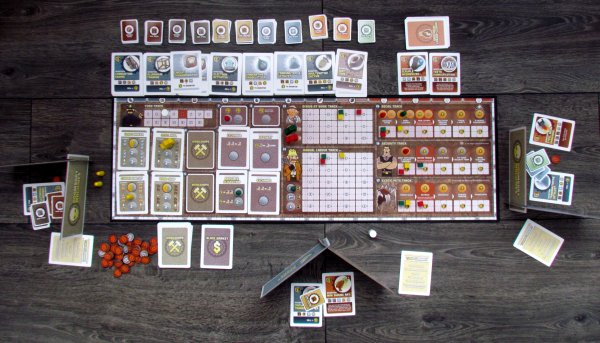 Game itself is ready really quickly. Just put game board in the middle and each player may take all his wooden parts in his color. Four pieces are kept for himrself and other five blocks will be deployed on schedule to variety of indicators. Everyone in the role of crazy scientists then gets one assignment for end of the world device. It will be joined by second random board, describing his plan for escape. Both boards are linked together and both need some resources to be ready. Some players then get gold as compensation for later order. They should also choose starting player and place turn counter on its place.

Cards of resources are divided by the type next to board. Commodity cards are shuffled and then as many cards as is players in the game are placed on the board from the deck. Next to them is also a place for cards of black market, from which will always be four available. Remaining cards are inventions separated by type into decks of three (with dark card on top) deployed to upper edge of the board.

Players then take turns in activating their henchmen and scientists, which in turn are sent to the board to fulfill their mission. The main advantage is clearly to obtain raw materials, which is made possible through randomly revealed cards of buildings. These gradually change during the game and players can use them, as well as the black market, allowing them, for example, to exchange some resources. 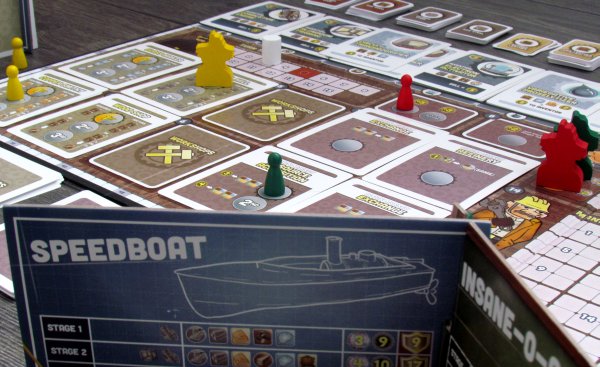 Very important are also all four scales. Especially Genius at Work, which means, that doctor closes door behind himself and invents, bringing him closer to doom. Player therefore moves his cube by three or two positions forward. This effort is as important for final launch of the invention, as manual labor, which has its own scale. Each device has a clear requirements of both these sources, as well as raw materials alone.

Posting pieces on the game board is targeted to predetermined positions. They are distinguished by color, so some can only be activated by doctors and others only can be visited by henchmen. Players then gradually (according to the numbered fields) evaluate their chosen actions, get raw material cards or go forward on selected track. Only then can they finally invent themselves and buy cards lying at the upper edge of the board. Here are the important discoveries, that may yet lead to successful completion of tools of destruction. Only the first one, who invents particular type, gets a patent and payment for everybody, who buys it later.

At the end of each round as all respectable citizens, even doctors must pay the rent, change building cards and continue inventing in the next round. Only after all fifteen rounds are played, players can use all their accumulated knowledge and materials to complete their dastardly plans. Every effort offers three levels of success. If someone fails to reach even the lowest, he has automatically lost. 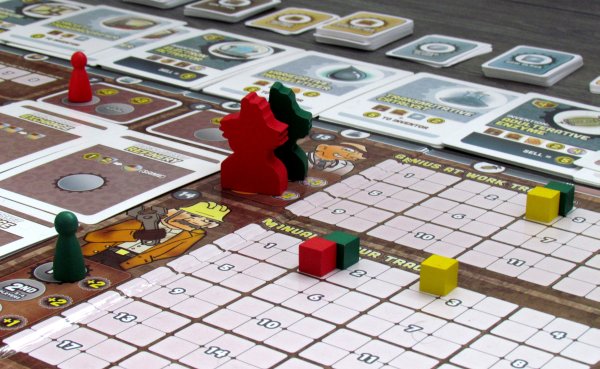 Goal of each player is to earn points, which have a different approach. The rewards will be awarded not only for inventions and escape plans, but also for positions on all scales from important manual labor, through creativity to optional social life and pets.They are summed at the end together with finished project level. But some players will have to reduce their score, in case they have used duct tape. The winner and best evil inventor is player, who at this point has most points under his bedsheet.

Whats He Building in There is essentially quite simple game of worker placement. When you look at it from a distance, you will think, that there is not really anything special. And yet the possibility of becoming bad and ugly, get a creature pet and destroy the world, is tremendously appealing.

Although we have already had similar games, we never been given chance to follow life of misunderstood genius. The rules are essentially simple, but decisions are not, because there is plethora of options on the board, as well as paths to accumulate victory points. Most important, however, are both boards, of which at least partial fulfillment is needed to at least qualify for the final evaluation for the title of greatest evil genius. 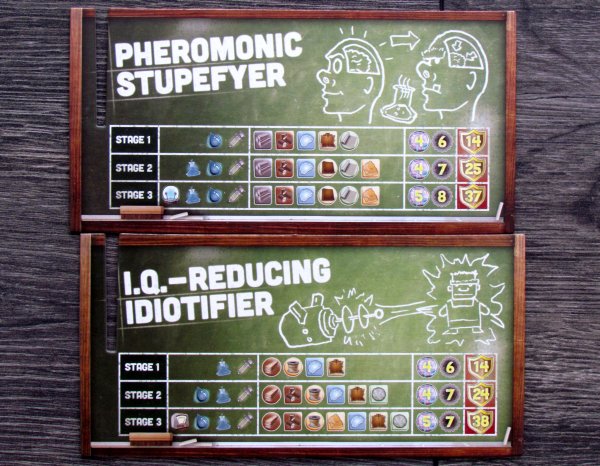 Game is interesting not only by splitting everything to two roles – scientist and henchmen, which each has its particular position. Also opportunity (but not entirely new and original) to be the first in the creation of an invention, gaining profit until the end of the game, is really nice. What most of us liked the best was division of tasks into two, so game is variable and players are fighting for different combination every time. Random cards offering resources further increase variability.

Each option needs to be though through very well, because time is short and doing everything that you wanted is not real. Therefore, it is necessary to make compromises, so you have a chance to finish and be scoreable. Especially if you do not know, how others stand with their efforts. This game is exciting until the last moment. During match, a significant role is played by luck, but its same for all and includes sequential revelation of cards, to which workers can be assigned and resources collected from there.

Although Whats He Building In There? Is basically very similar to other worker placement games, but nevertheless has surprisingly different feel. And because you really enjoy from start to finish. The game is then better with a higher number, while with two players card offer is too restrictive. Players may very well block each other, which is fun and creates another level of tactics. The game can get slower with more thoughtful players due to wide range of actions possible.

In processing, the game board is clear, as well as cards and all symbols. Game does not somehow excel in graphics, but general processing of component is at a high level. Precisely because of the quality requirements according to the publishers statement was also delayed release of the original game, which otherwise was published thanks to the support of fans on the site Kickstarter.

Whats He Building In There? is a surprise hit, which is incredibly fun and even though it is another worker placement in a row. It feels sufficiently different, but mainly offers great theme, that no one can resist. And that is, when title question comes into the right place: What are the others DIYing?

Whats He Building In There? is a real surprise, because although it uses well-established mechanisms and does not bring anything significantly new, feel of the game is really fresh and fun. And as such, it succeeds mainly in a higher number of players, where it really excels. Everything is exciting and close until the last round. Players are collecting raw materials with randomly revealed cards, which are different for every round. It is this luck, that is both interesting option, but also a disadvantage - sometimes players are severely limited in their plans. Spinning evil intentions is especially challenging with the many activities available. Whats He Building In There? is a subtle game, that really deserves your attention.