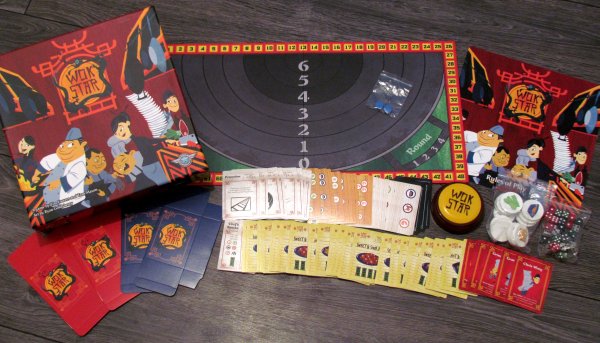 It smells good everywhere. How I always imagined it. Crack in the door allows me to see satisfied customers as they enjoy a variety of our Chinese specialties. People really can appreciate good cuisine. I see it in their expressions. And between all that dances a leggy waitress. Today we begin a new era of Chinese gastronomy.

First day in the new restaurant is simply a true experience. But adventure continues, because each day is a new challenge, with new people and new desires. Just like in the board game Wok Star, which was created by Tim Fowers and Tom Mason with illustrations from Ryan Goldsberry. Then it was all published in production of small businesses Gabob, LLC under auspices of Game Salute in 2010.

Inside the box, you find not only special elongated game board, with orange-yellow circles numbered from zero to six towards the middle. Around that also circulates finance scale. Remaining fortune of whole game is hiding mainly in cards. There are recipes (12 pieces) with a list of necessary materials and price, but also customers (without portrait, only with their ordered meal) with marked profit for chef in the form of banknotes (most of all cards, 48). 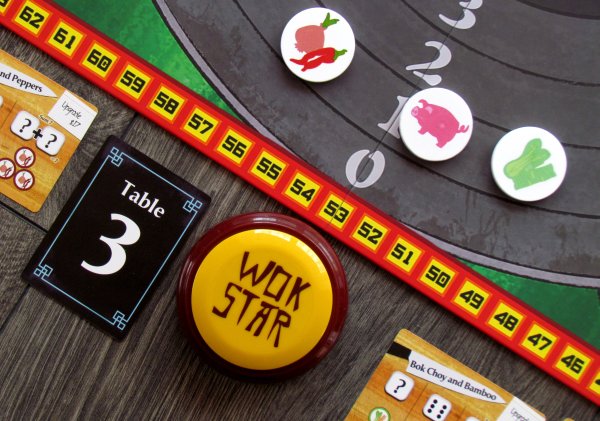 There are also other cards – characters, preparations cards (representing action possibilities in several sections) and events. We are missing also dice and clock. But they are not represented by classical sand hourglass, but instead, you get an electronic device.

At the beginning of the game, everyone chooses a color and receives three dice, but also several recipes in it. But above all, he becomes a member of one of the families, because he receives a character card. Players together mark money track with one token on zero and reveal recipes. According to number of recipes, they must create a customer decks (one larger and one smaller backup). Dealing preparation cards also depends on recipes. Players put these cards in front of them, so that each had at least one, which are needed to complete meals actually in the menu. First round is marked on auxiliary board next to the main board.

Game is just starting and it comprises of six rounds. At the beginning of each round, it is necessary to simply push on the red digital button and then reveal top card from customer deck. At that point, players can roll their dice and start cooking. In serving customers, they will alternate and pass their meter as soon as they have served their visitor or when time expires. 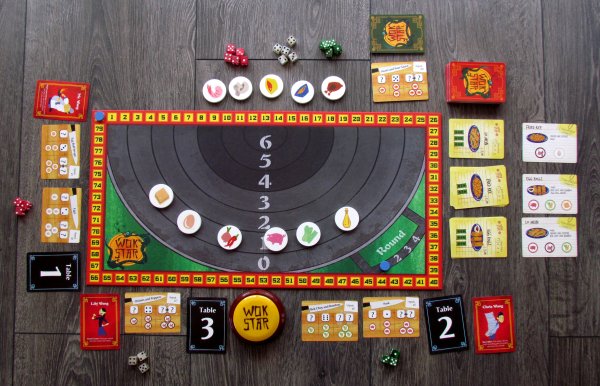 Players can use their dice and place them on preparation card. Various combinations of number placement are available to gain some amount of ingredients. So player can get one, two or three ingredients, according to number of dice, that he sacrifices. All dice sent to this card must always have the same value. According to gained profit, player immediately moves token of this ingredients on common board towards the middle. These markers indicate, how many pieces of raw materials are all players sharing.

Even other players can cooperate with active player on preparation of his meal and are allowed to borrow dice to him. Why would they do that? Because if he fails to serve the customer, bad publicity of the whole restaurant increases, until all players can close their restaurant as the result, all before they can celebrate victory. Therefore Wok Star is, quite unexpectedly, a cooperative game. But the dice must be handled carefully, because they could miss them later. It is therefore necessary to use them as efficiently as possible.

Once a player creates enough resources to serve his customer, he can take his card and reduce supply f ingredients in the kitchen by the required number. In case the cooks have still time, they can produce more ingredients with dice. Only when time runs out, button can be passed to next player, who hit it again and turns a new customer. 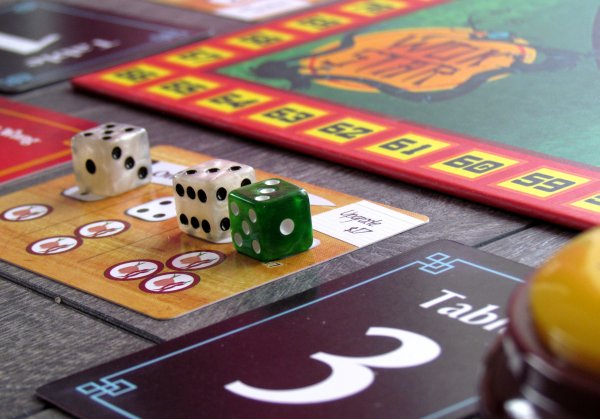 Chefs can finish serving customer even after time has run out. But such a card is then taken face down and later in the game mixed back into the pile. This is still better, than being unable to serve customer at all. It can happen, that players are poorly arranged and total number of raw materials is not enough for them to produce ordered food. In this case, customer leaves unsatisfied and creates a black dot in bad publicity (never to return).

By serving customer or his departure, action phase ends and dice return to their owners. The more customers will be serviced, the more dice can players use further down their gaming road (up to the maximum number eight). This is, because number of dice always balances with number of collected cards. Now is also time, when players need to add up served customers, subtract bad publicity and add dice used on correct places (colors). This provides funds.

At the end of each round, cook team can buy. New recipes for public finance can be chosen from a randomly rotated offer of three cards. These new meals allow players also to attract new customers, which are shuffled into the deck. As a result, they earn new cards of preparations, that need to be assigned as responsibility to one of the chefs. Also preparation of meals can be made more effective, when coins are payed and preparation card can be turned to the other side. After fourth round, game ends and players must evaluate, whether they have achieved sufficient profit to keep the restaurant running. This amount is set to forty, sixty or eighty dollars according to number of players. 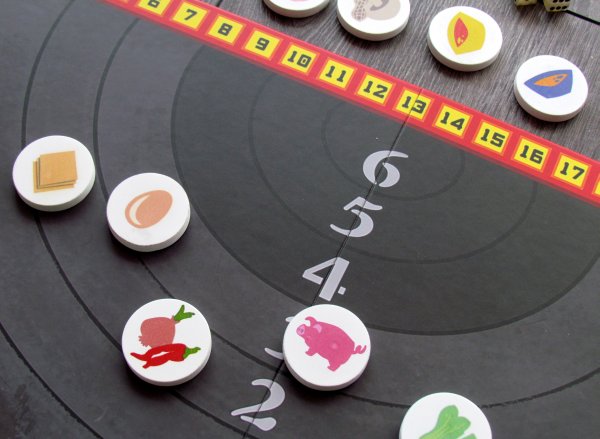 Wok Star is a crazy cooking cooperative game. Perhaps you would not expect, that this theme might be something to cooperate in, but its true. And it is good, that although one of the main characters is a wok pan, authors did not take every mechanic they can think of and threw it inside. Thanks to this, Wok Star is an interesting mix, that works.

New version of the game with an electronic device is nice. In the original printing, there were only two hourglass with quite confusing usage. Here, all you need to do is just simply press a button. Novelty is also three intervals, which can be set and are used to adjust difficulty. For beginners are thirty seconds, everything is a lot harder with twenty and fifteen seconds are really hellish.

By setting financial needs to rescue restaurant, you can set demands of the game from the other side – end conditions. Difficulty unfortunately also differs according number of players. While with two, this is truly uncompromising game (only recommended for experienced players, who already know the game, because there is less dice to spend), while with an increasing number, it gets a little easier. Fortunately, when playing with two, you can lift time limit and thus improve your situation. 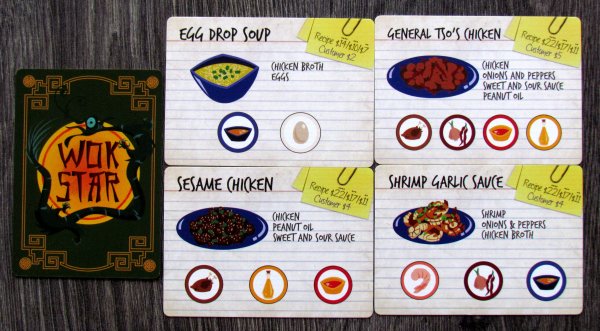 Maintaining the restaurant may be tried even as a solitair. In this case, player must be capable of playing for two characters. His task and setup both are equivalent to game with two. Player has everything under his control.

Replayability itself is quite debatable. Although players can increase difficulty, it seems, that the game lacks some new and distinctive characteristics, that distinguish particular matches from each other. But that is only until the moment, when you add events into the game. Random arrival of these cards along with different order of customers partly compensates for this problem.

This game is also not for everyone. Its in the very fact, that most of the activities take place in real time and players are therefore under constant pressure. While some will welcome such a game, others avoid it from afar. These action games have their own specifics and you have to be in the right mood.

Wok Star is well suited to families, where it does an excellent service. If you do not play it every day and your teammates will vary from time to time (visit), you will have lots of fun. New players are easily taught to play the game. Everyone must carefully work together from the very first moment. But beware of the age recommendations, because ten years seems like a reasonable minimum, for children to correctly make decisions under pressure. But because this is a cooperative game, a little assistance from older players will not harm anyone.

Entertainment is held from beginning to end. Thanks to really straightforward course, game makes no significant demands on experience. But players must communicate well and work with their dice. Game time is always very similar and will take about one hour of time, that runs away incredibly fast.

Wok Star offers a very different cooperative experience. This is not about saving whole world, there are no monsters or spaceships. This time, its between you and a wok. And it works very well. Game entertains both adults and kids (they love crazy and chaotic entertainment) and is also suitable for smaller parties. Wok Star is a pleasant surprise and a game, that is not well known. Its time to fix it.

- difficulty varies according to number of players
- matches are similar

Wok Star is a Chinese dish, which can be savored by all fans of cooperative games. The course of this game is pretty hectic, because everything takes place in real time. Each time, true action belongs only to one player, while others can assist. This active players prolongs time with his success and gives others a chance to serve more incoming customers. Game is fast, dynamic and very interesting. Minor problems lie with scalability (much harder with two), otherwise its a solid game. Wok Star is a little different cooperative game, that deserves attention of chefs.