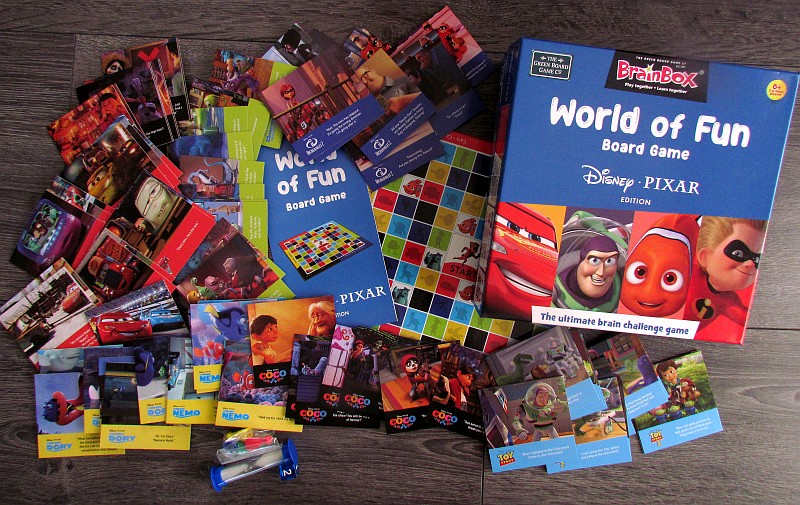 All heroes meet in the world of entertainment. A place among the worlds, that had no name until recently. But when Sully, Woody and Nemo met, they invented the name World of Fun. It is a place, where they can break free from the rules of their home environment and just enjoy themselves and have fun. They don’t have to listen to their parents, friends or bosses. They are all here and for themselves.

And players can join them in this world in the Disney Pixar Edition World of Fun Board Game, which is created by The Green Board Game Co and simply ranks among the popular BrainBox series of games. We got a chance to play the original English version, that was published in 2019 and comes in the distribution of Esdevium Games.

Several popular heroes look at the player from the lid, be it Woody or Lightning McQueen. Inside, there is a square game board, which is covered with lots of colored squares. Below it is an hourglass, a die and pawns. But the main component is the square tiles, that contain an illustration on the front and six numbered questions on the back. Tiles are color coded to belong into one of six worlds of the game: Cars, Toy Story, Coco, Finding Nemo (Dory), The Incredibles and Monsters Inc. 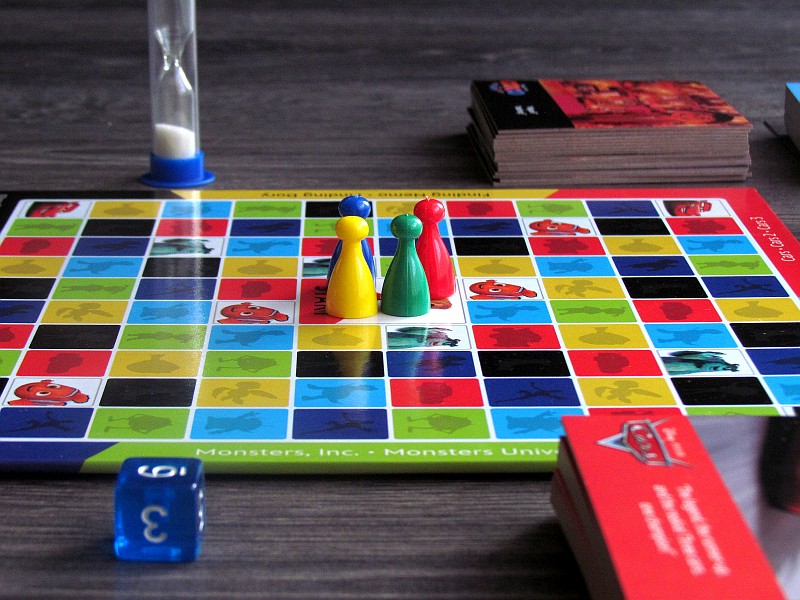 The game is setup simply by placing the game board and spreading the cards according to their color, shuffling them. Individual players each choose one pawn and place it on the starting field. They all have to start together and stand at the center of the plan.

Players take turns to roll a dice. The resulting value is the number of steps a player’s figure is allowed to take in any direction. While doing so, it can even make turns. If player then stops his movement on any of the colored squares (which are virtually all), he takes the tile of the corresponding color and can begin to study its image. At the same time, the opponents turn the hourglass and start measuring a short time period. 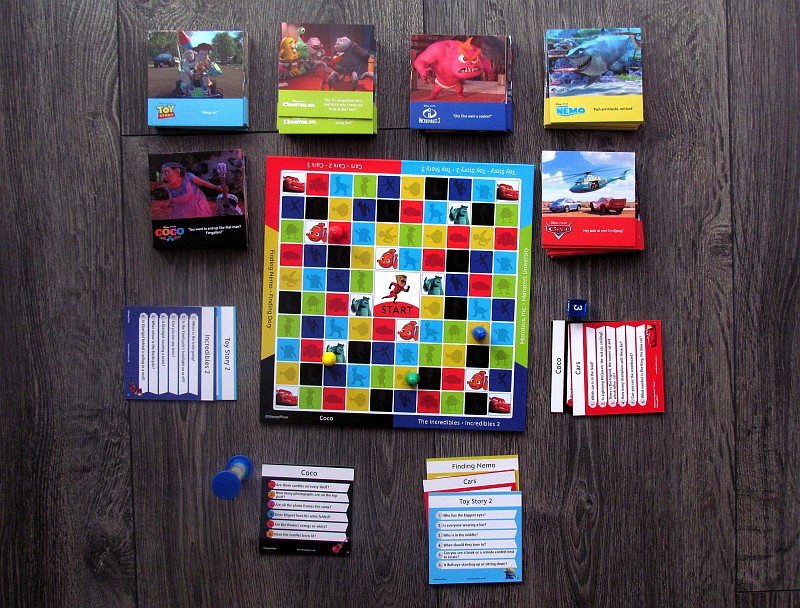 Once the sand runs away, the card must be handed over to one of the opponents, so player no longer has view of the picture. Instead, he rolls a die again and the number determines this time, which question the player gets to answer. He will try to find correct response, and others will check his efforts. If he is right, he will receive that tile as reward, otherwise nothing will happen and the next turn begins.

The task of the players is simply to collect one tile of each color as part of their movement and answering. The one, who succeeds first, becomes the winner of the whole game. 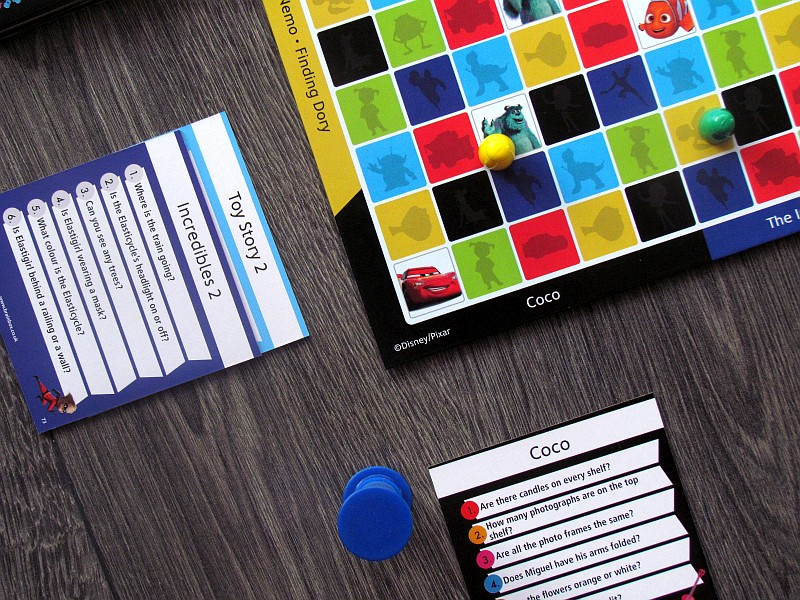 World of Fun is not only connected to the classic BrainBox cubes, but also to a big board game from this series – BrainBox Board Game. World of Fun, and above all the BrainBox mechanism, has come together with one of the most rewarding themes for family and children’s play – Pixar movies and fairy tales.

The pictures are seemingly simple not with that much detail, but they still surprise and torment you with intricate questions. In the ten seconds, that a player gets to properly inspect a tile, it’s not easy to spot everything. This is because the cards also contain text. 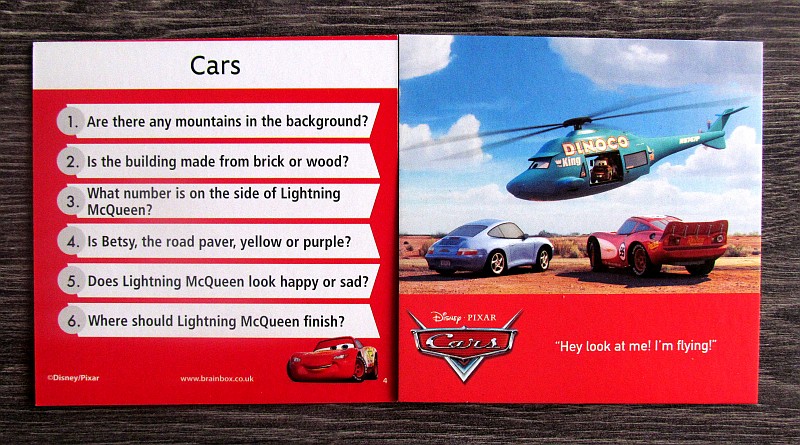 And here comes the moment of decision. Children has to be able to read english to have fun. Maybe you tell yourself – is this game solely meant for children? Fortunately, it is not. Among us is a number of adults who just grow up easily and like to watch fairy tales even in their senior age. And they enjoyed this news immensely.

It is then clear, that without good observation and memory, players simply cannot do it. The questions ask not only about the obvious things, such as the color of clothes, the number of characters, the presence of some objects, but also their mutual relations or distances. 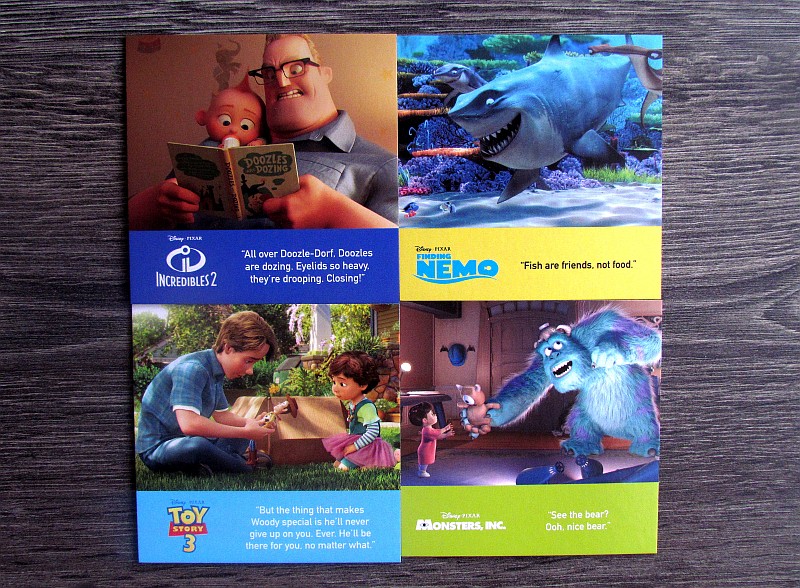 For kids, the game is another chance to spend time with their favorite heroes. In addition to the absolute classics, which always have more than one episode, Coco is a surprise. Rather, we would expect Up or Inside Out.

World of Fun Board Game The Disney Pixar Edition relies on the already existing series. Time pressure in search of all important elements is the basis of everything. Processing is nothing to discuss, because the game has got great pictures and scenes from popular movies. Disney Pixar Edition is a great family game for all, who love cartoon stories.

World of Fun Board Game Disney Pixar Edition has a long title, but because it is based on another game and only pastes a new theme on it. One that will not surprise anyone, because it looks gorgeous almost like every Pixar movie. And everyone loves those. And so it's hard to deny the chance to re-enter these fantastic worlds. The game is about mindfulness and remembering, because there are questions about the content of the pictures on the back. Disney Pixar Edition is a great family game from a world of popular fairy tales.

Review: Pictopia – all fairy tales in one place

by Dušan on 21. 03. 2016
Where all those princesses and drawn heroes come from? Where is the country, where they feel safe and are not afraid, that evil Zurg or other nightmare [...]
Comments
Leave a reply