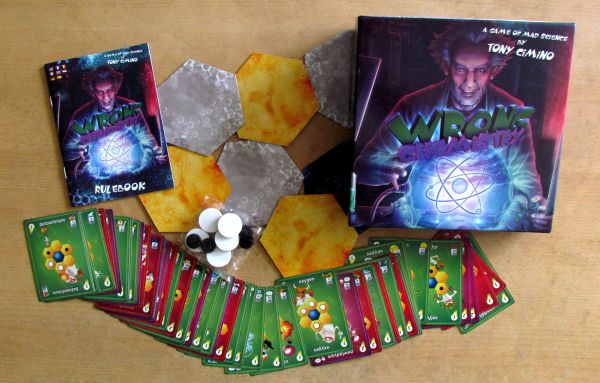 “We add a little pepper and a pinch of salt,” man in ragged clothes muttered quietly. At first glance, it was clear, that he was really someone once. Most of his suit lost gloss, but in some places, which were not hidden behind splatters of different chemicals, you can see a pretty uniform it once was.

But this man is not in a kitchen and he is not a cook. He stirs combinations of known compounds and tries to bring something to the world, that no one before him did. But if you look a bit to the side, you can distinguish in clouds of chemical smoke two other similarly edgy characters, carefully collecting material from their tubes. However, there is only one table in the room.

Are you wondering, who they really are and what are they trying to make? Medieval chemicians is answer to the first question. And liquid luck to the second. But while they are together in one room, they do not work together, they are competing instead, moving ingredients, steal them from each other and pull their finished things out of pots. Perhaps there is something more gracious to this spectacle.. 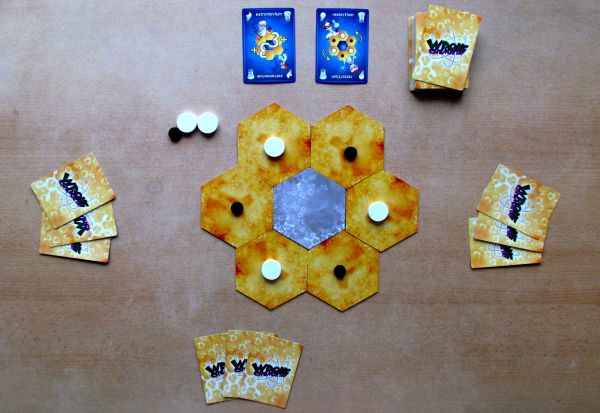 So we actually know, where it all started. Such alchemy madness is basis for a logical combination game called Wrong Chemistry, created by author Tony Cimino. Its publisher is a new starting firm Mage Company, which in addition to this chemical puns released also game Eragra earlier. And just in these days, their Kickstarter campaing for a very interesting fantasy cooperative game 12 Realms is finishing.

Wrong Chemistry is a game hiding in a small square box with a blue-violet color with mad chemist on the packaging. His bristling hair suggest a little of thing, you will do in the game. But first, let’s see what ingredients has Tony Cimino mixed for you to form the right entertainment.

It could not be a chemical play, if there were not basic shapes of the popular chemical compounds inside. Hexagon. Now with his cleavage and derivation you will create other compounds. 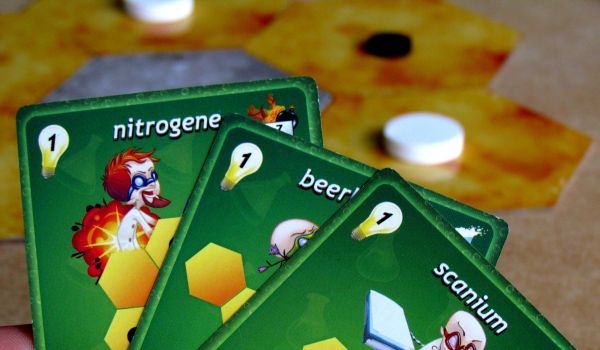 So these pieces actually form a hexagonal game board. There are altogether seven of these tiles. Six orange form a circle around a nucleus, dark blue piece. These hexagons are the largest parts int the whole box, a little close to them is a package of 52 cards. You will find green, purple, red and blue substances among them.

Each card has a different wearing compound, whose name can be found in top and bottom line. To the left of its name is the number of points you earn for their correct preparation and also serial number of this compound on Wrong Chemistry table of elements. Most important is an image in the middle of each card, which tells you, how should be the structural elements spaced to achieve this compound.

In addition to the cards already described, there are only black and white tokens inside the box. These will serve as nucleus. And there are of course also rules, that contain a great deal of languages. Unfortunately, neither Czech nor Slovak is not among them. At the end of the rules, you will find pictures and a full table of chemical elements present in the game. The text of the rules is not long, which promises a simple game. And this unspoken promise is well kept. 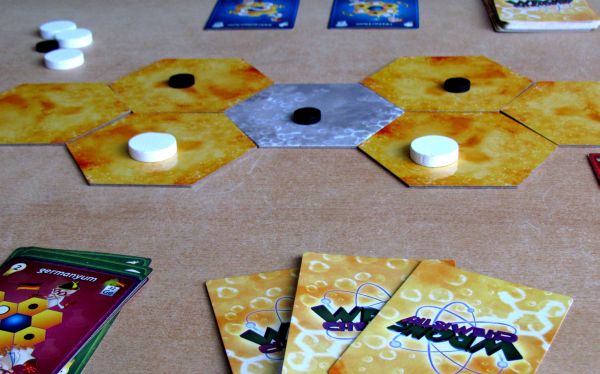 At the beginning of the game, you sort out two blue cards from the deck – restartium and extramovium. You should lay both of them beside the board, where they will wait for action. The main board should be created exactly as we suggested earlier. You put blue hexagon in the middle with other orange surrounding it in a circle. It is on these orange pieces, where you scatter black and white chips alternately. The rest of these wooden pieces starts the game next to the plan, but you will certainly find use for them soon.

Players will shuffle deck and get four cards of random tasks to their hand. The colors do not matter in the distribution of cards, so you can get simply four green or red, complex ones. You cannot tell difference among them, when looking at the back of cards, of course. But most of the time, you get some mix of compound difficulties.

A chemical runoff can begin. Players alternate in turns. Each of participants has four action points, that can be spend at his discretion for one of the available actions. The simplest one is throw a bad task card, which you do not want, from your hand hand. This option is not used too often, because it pays off to at least try for most of the compounds during the game. 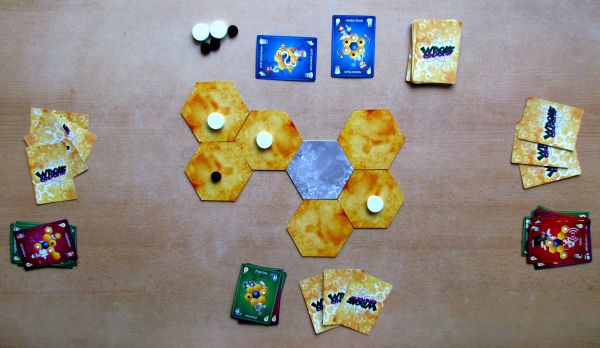 Any time during your turn, you may pay one action point and return entire game board to its original state (from beginning of the game). To do this, use a restartium card and rotate it – you can use it only once during your turn.

The rest of the actions covers the most important thing – objectives, which you will pursue during the whole game. With moving of elements, you must create a precise graphical representation of the molecule, which is drawn on some card in your hand. To accomplish this, you can spend action points for the removal of one of the black/white stones and putting them outside the plan, but also on the contrary adding one stone from the inventory on any empty hexagon or moving it from one piece to another.

Simple restriction applies here. No hexagon can host more than one black or white stone at a time. But you can simply move hexagonal building pieces, as complex chemical elements do not usually have a regular circular shape. Instead, they are crawling sideways like spiders. However, you can only move such a division, when there is no stone located on it.

And that’s all. Through moving pieces and stones, you are trying to meet some of your cards tasks using only your four action points. If you succeed, then you can show others finished card and discard it in your scoring pile.

Once per turn, you can also use chance to have more, than four action points. But this would be too easy, right? So this time you have to pay one of your already completed card from victory point deck. You discard this card and buy another three action points, which can help you meet the more demanding elements.

At the end of your turn, players always draw back to four cards. The moment a player can not draw cards, because pile is empty, game ends. Now you add up all accumulated points written in bulb symbols in the card corners. But also serial number plays a role, when counting points. If you managed to collect some straights of these numbers, then you reach for bonus points. You can add one point for each card, that is part of it. The player with the highest point score wins whole game. 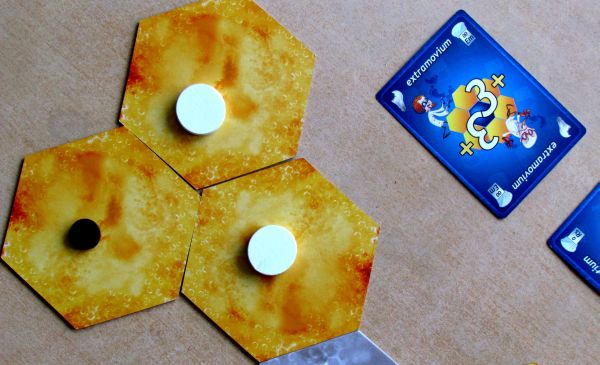 Wrong Chemistry is an interesting game, reminding a tug-of-war. Opponents are constantly trying to rebuild a game plan in his own image, but they have always only a limited number of moves. Therefore, you need to think every move very well, to be able to accomplish any of the tasks in hand.

Interaction between adversaries is really well done, because each movement, players interact. But you do not know, what cards the opponent is holding. So by playing in your favor, you can also help him in doing his certain tasks. Many cards have a portion of disposition quite similar, so this is true from time to time. This is place, when luck comes handy.

The game is very tactical and requires careful planning of every move. If you make a thoughtless move, you can unnecessarily complicate your way to completion and you must spend more time during next turn to correct it. Often, players will payment with their aquired one point to meet more complex goals for more points. You should however calculate it in advance, if you can manage completion in those additional three actions, and if therefore card is worth spending.

What is perhaps unnecessarily overcombined, is rewarding players for completing straights. These, in contrast to the rest of the parts, is really very random and can therefore have large impact on result. Overall, accidental drawing from the pile and tactical impression of the game is much better served by using a common supply of the five exposed cards distributed beside the board. This would make more straight path to victory and you even can occasionally have an idea, what cards is your opponent holding in his hand.

Processing is nice. Most appreciated are inscriptions on the cards in two places above and below. In order to correctly deploy puzzle, you are doing a lot of turning cards and it’s good, that you can keep track of value and number. Illustrator had a sense of humor, some images are then really entertaining, just like the actual element names.

In game with more opponents, the whole result is more random, but fun of the chaotic play can be even larger. And according to our sense, this chaos is an intentional part of the game. While in two players, this is much more tactical game and real tug-of-war, where you can prepare the situation in one round and then catch your opponent by surprise in the next. You will always get a completely different plan and you have to prove, that you are able to completely rebuild its image within just few actions. 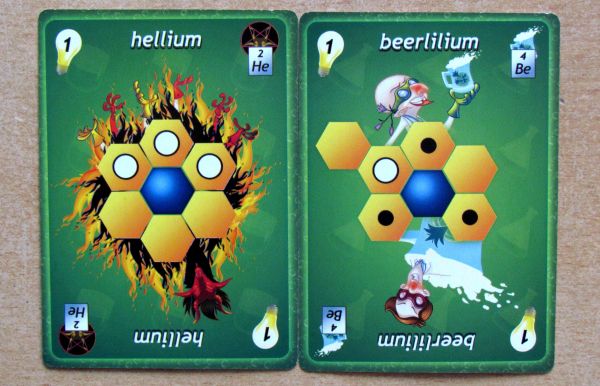 Wrong Chemistry is a simple tactical game of abstract chemistry, which is a little out of control. The game is definitely fun and not just because of its lightweight approach, but also due to simple rules. Game pleases all, who love moving stones with a few secret goals, which are constantly in the viewfinder.

Wrong Chemistry is a game, where chemistry is not wrong, just fun. Simple fun, where you are struggling to fulfill card goals on a common board, where you create, move and destroy molecules of different crazy compounds. One of main attractions is in clever names and illustraions on the cards. But it would not be enough. Much more important is the whole gaming impression, which is based on a tug-of-war principle for task completion held secretly in hands. Unfortunately all these cards are randomly drawn, so luck plays a huge part in your choices. And scoring is even more luck-based, because you do not score only for completed cards, but also for straights in their numbers in periodic table. And those complicated cards can be finished only with extra move. To get it, you must throw away a less valuable card you have completed earlier. This might be noted as a pro or con, based on your preferences. It presents an interesting choice. Wrong Chemistry is not a bad game, its quite fun and looks nice. It just has few atoms on bad positions..