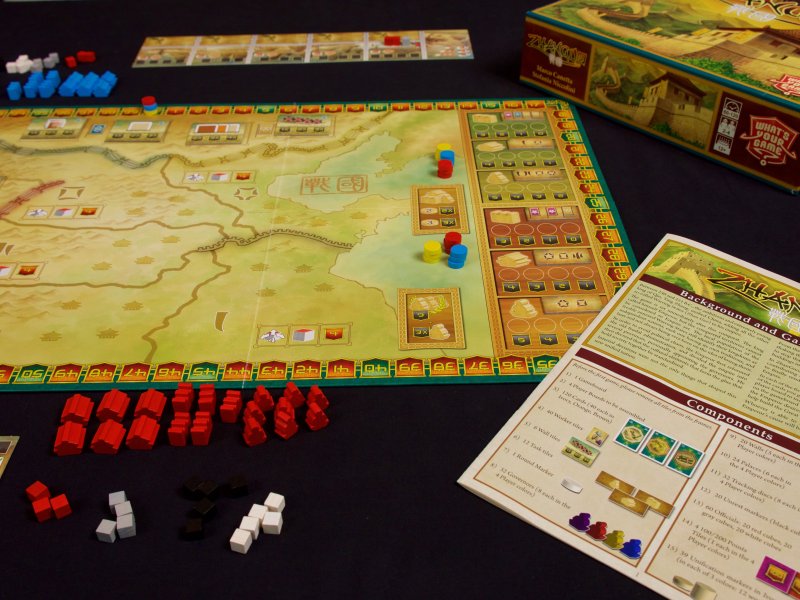 The history of China is for many of us entwined with various legends and many times even Chinese themselves like to invent some heroic deed for first emperor Qin Shi Huang, who unified the warring states sometime between 230 and 221 before Crist.

Authors of Zhan Guo game are not striving for historical accuracy, but instead take the colorful history of the country into its midst and builds euro game around it, full of hard decisions and unavoidable consequences of their actions. Those authors are Marco Canetta and Stefania Niccolini with illustrations by Mariano Iannelli.

Game is designed for 2-4 players, everyone at the beginning of the game chooses a color and takes tokens belonging to him. In the game, player has a stock of governors, who will be deployed to provinces, palace to raise fame, fortifications becoming known as the Great Wall of China, five riot dice and fifteen cubes of officials of different colors. 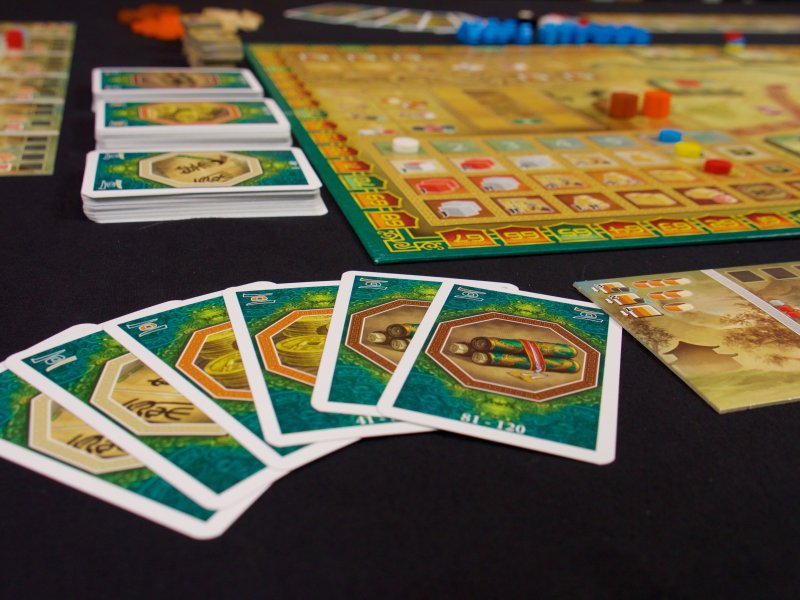 Game board is divided into provinces, each containing space for governors and palaces. Wall parts are built on designated areas and they always provide a particular advantage, that player gets for its building. On the right side of the board, there are tasks, that players try to complete during the game and gain victory points for them. These are the type of challenges to build a palace in that or the other province or to send governor here and there. And so on.

To give you an overview about victory points, game plan is surrounded by synoptic scale, where you can see your competitors fleeing. Scale goes up to 99 points, but can be circled around several times, vigorously during the final scoring.

In the lower left corner of the game board, you will find turn counter and underneath it other rewards, that players can receive. Slightly above is area called the courtyard, where most important decisions happen. In terms of game mechanics, this means place, where players place cards and evaluate individual actions. Given that, this is the key game mechanic. Let us describe it further. 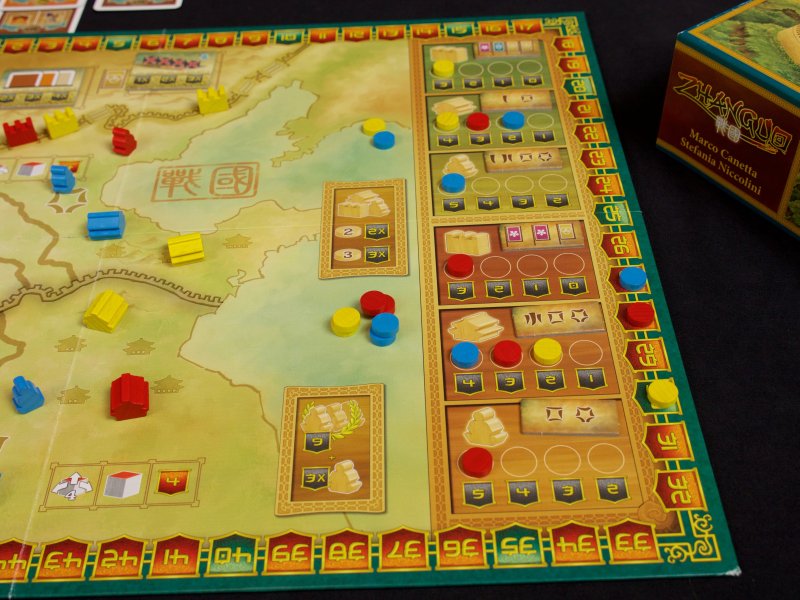 Game round is divided into three basic and in core simple phases: taking cards, playing cards and rewards for unification. As it is with euro games, it’s not hard to comprehend the rules, but what really matters are gameplay decisions. There will be really quite a few, and as the game continues, everything starts to build on itself even more.

At the beginning of the round, you take 6 cards, which have number in their bottom corner. And in the upper half is symbol of one of actions and also bonus, that could be provided by this card, if you have it on your game board at some province.

Yes, yes, we still have not mentioned it, but each player has also smaller game board in front of him with five provinces, that correspond to those on main board.

Fundamental decisions are all based on how you play your cards. The most common usage is to lay card into the yard and pick one of the available actions. Which action you can choose from is being given by number at the bottom of the card. For example, if you want to build a temple, you must use card with a higher number, than the one that is currently there. In other words, you must trump card, that were played there by any of your opponents. Other actions may have opposite requirement, such as appointing the governor requires a card with lower activation number, than the previous one. 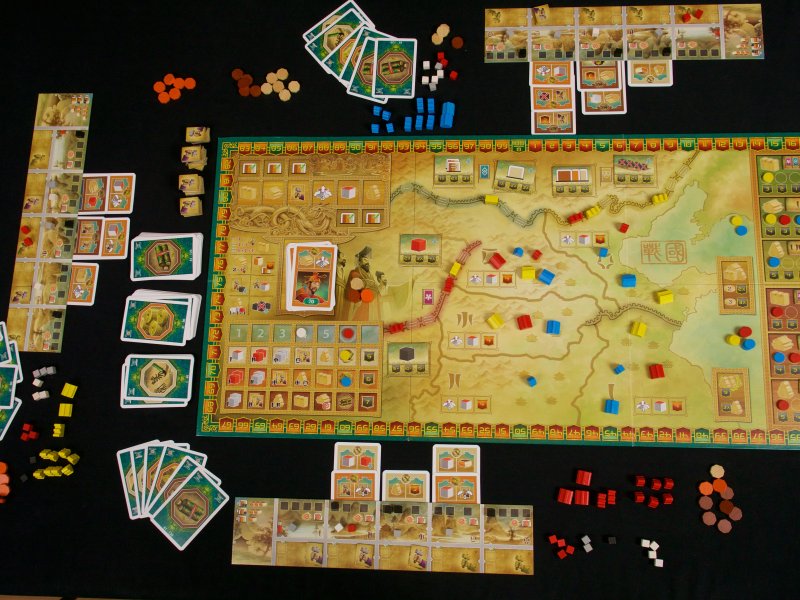 And for that matter. In fact it is very simple rule type of you need to do this, you have to beat it, you need to do it over there, crawl under. But your opponents may want to do the same, or you can play intentionally card there to prevented playing others action they desire. It needs a lot of thinking and tactic plays an important role in deciding, when and in what order to play actions.

Well, as if this was not enough, you still have another possibility to use cards: as a union action. Cards can be inserted underneath your game board, always near one of the five provinces. You can even gradually utilize multiple cards this way and create a very effective combos. Each card has a bonus, that applies to general actions. From the very affordable “get three victory points, whenever you build the palace” type, up to enhacement allowing you to move resources between provinces.

But there is much more in the game. Did we mention, that to build palaces and walls you must have a workforce? And these workers must be present in the province, where you want to build? That to appoint a governor, you must have enough ordinary officials in the province? Another dimension is hidden in collecting unification tokens, that can be each round exchanged for other bonuses. You must also keep an eye on unrest in the provinces, because process of unification was not without occasional displeasure of ordinary people. Just… this is a very complex game. But! 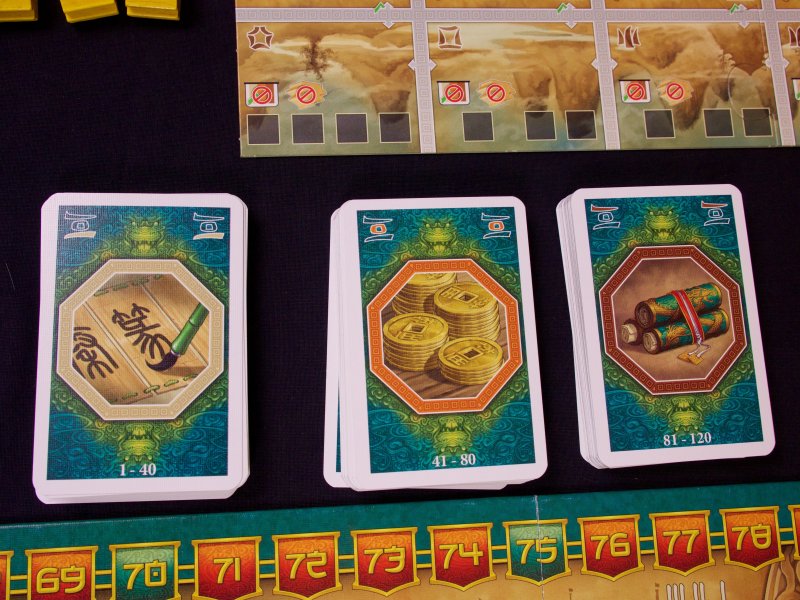 One of the best we have ever played. Gaming decisions have depth, it’s certainly not just a simple assessment of what is best for you. Based on the cards you have in your hands, you must set yourself a target and make the most of it. Gradually, you are building a base and each round, you trigger more and more bonuses, that will open up more and more possibilities.

To manage everything costs more than a few brain cells and so get ready, that the Zhan Guo can give you bad headaches. Match full of players (which is ideal number of players for this game) will take an hour and during that moment, you do not stop for a moment. To win, you must watch even your opponents, block their actions effectively and possibly several rounds ahead.

Zhan Guo is heavy Euro game, which is not easy to get into, but its depth can be compared with the best representatives of the genre. Sure… it unifying national theme is essentially interchangeable and in terms of game mechanics expendable. Also visuals are not exceptional, where game board could be opulent orgies to your eyeballs, you find only drab brown painting, that will not offend nor thrill you. But maybe, we get to  eventually see some deluxe edition released. In the meantime, we will gladly return Zhan Guo to our gaming table again and again as it is, because this is simply amazing game.

From time to time, game appears, that has the potential to fry your brain synapses in an unusually friendly way. Last time, we felt so beautifully exposed, when playing Terra Mystica. But Zhan Guo comes equipped with the heaviest calibres. Minimum luck, difficult game decisions, lots of paths to victory, long and short term planning, unsightly game components - eurogamers will ooze in enthusiasm.