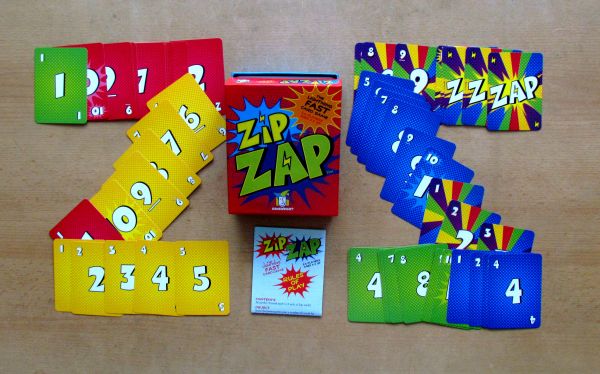 Spells can be a source of light. But what, if the light can serve as a source for magic? Flash mages, that is what they are called. Do they exist? Hard to say. But their name has nothing to do with their speed. We believe it. For they are specially trained masters of magic, who are able to tame lightnings. It serves for them as a source for two magical formulas: ZIP, which makes flash tame and ZAP, which sends it in a new direction. This secret order, whose existence was known only by a few, was uncovered by a card game called Zip Zap.

Its authors are Amy and Brian F. Weinstock and their game was put into distribution (despite many warnings from the lightning mages association) by GameWright company. It is good, that they do not fear threats, because this flash game instantly radiates energy on you. The graphics from Lisa Goldstein are very simple, but sufficient for card game.

Box corresponds with dimensions to those small classic games from GameWright (Sleeping Queens, Loot). Inside you’ll find one tray, which holds all 56 cards. Fifty of those consist of one through ten cards in five different colors – blue, green, yellow and red. The fifth color is rainbow composed of the previous four, completed by an additional purple – these cards are jokers and can be used on any other color. 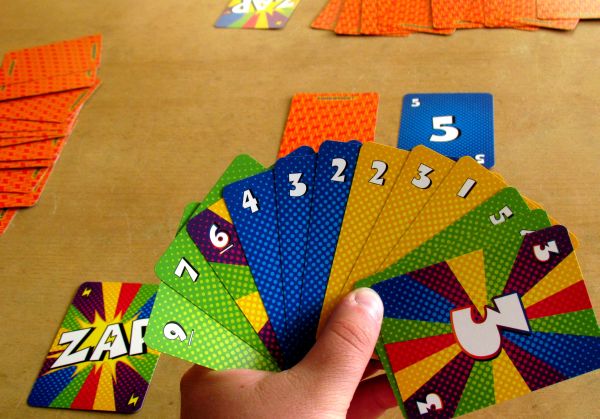 When you set those five color aside to make one deck, six cards will remain in your hands. They are called ZAP cards and are wearing this word also written on them. These cards are another magical jokers, which can stop time for a while during gameplay.

To start playing game of Zip Zap, you shuffle a deck of cards without six ZAP cards and deal them to each player. Number of cards for each player is specified in rules and is different according to player numbers. When playing with less players, some colors will not participate in the game and will be set aside.

In addition to these cards, each player gets also one ZAP card. Rest of ZAP cards would not be needed in the game and you can put it back into the box. You should also lay a pencil nearby and paper, on which you will note score of each round. 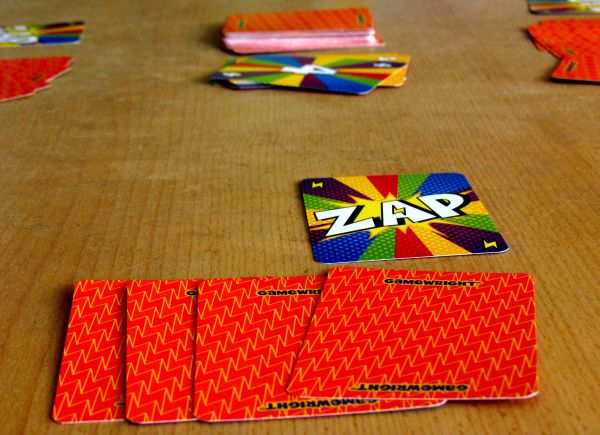 Some cards will remain undealt, so you create a drawing pile in the middle of the table. You then turn top card face up. This card is the first condition for playing cards. Now is a good time to allow players to organize cards in their hand. They should sort them by color and within by numbers. Game will then play much better.

Now you get ready to fight. Take a good deep breath, because all players play Zip Zap at the same time and there is not much time for rest during round. The first card on the table shows a number and color. The moment players start the game (for example by countdown), they can begin playing their cards in a way, that they form a straight. The card must always be one higher than the previous one, but also must follow color suit.

In addition to cards of the same color, you can also play card with all the colors of the rainbow. But even this one must be a plus one card, so if you have six on top of playing deck, you must put there seven. No matter if it is correct color or rainbow joker. These jokers allow you to change the color of play, because you can put it on any color. 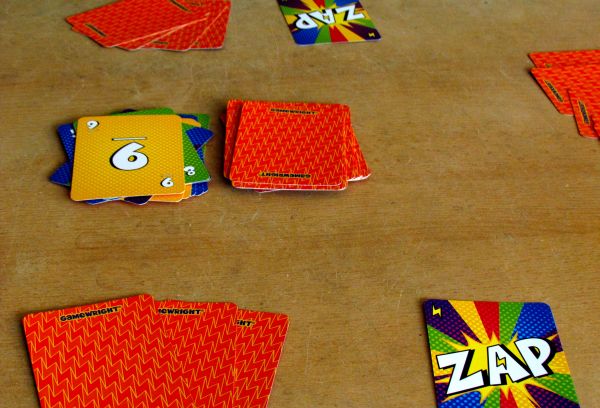 The moment these increments reach number ten, the game will freeze for a while. One of the participants, the one who played the ten, now has the ability to play any card of lower number and of any color! Once new card is put on the table, everyone can continue with playing.

The last exception to this rule is ZAP card, which can be played only once per round by every participant. At this point, play is again interrupted by player screaming ZAP, when playing some numbered card. He can now again play any card from his hand, as if he has just played a ten. This is a really strong ability, but you can use it only once per round, and it is very important to think about timing.

From time to time, of course, it may happen, that none of your opponents can play card with needed number. Fortunately rules are aware of that. Player, who has put on the table the last card gets one more chance to play anything from his hand. He selects any card and places it on the pile. Then the game continues normally. If you did not like advantage, that this player gets, you can turn new card from the drawing pile instead. 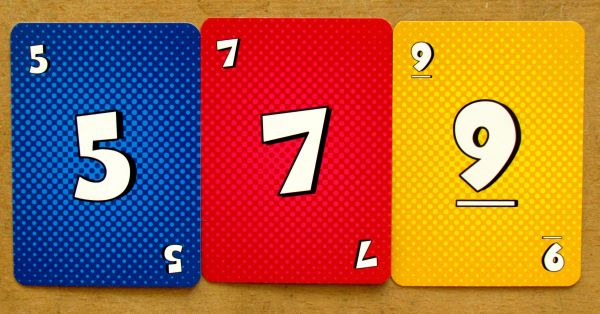 Round ends, when one of the players manages to empty his hand. Everyone else will get penalty points for the cards, that remain in their hands. If you are playing with younger children, you can only play to victory and earn points only for each round won – a simple stroke next to players name. For children, it will be much easier than complex counting of points, which uses different number of points for different kinds of cards.

The main reason is, because until kids learn the game and master orientation in numbers and colors, it will take a while. You did not want to take away their motivation, when they see themselves far behind, you can do this little coverup.

Zip Zap is not a complicated game. It takes a classic game system of Uno (review available only in Czech) and converts it into the game, where players do not alternate, but play simultaneously instead. Compliance with the colors also adds a condition for the number. This makes the cards harder to play and it is much more important to plan, how to deal with cards you have in your hands and how to use them. 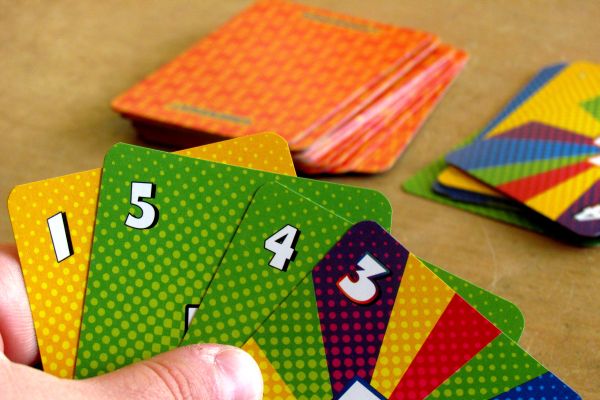 Meanwhile, others will put their cards, because they are trying to do the same thing as you. You can be sure only of one thing – every combination of number-color is present only once in the whole deck. And also, that already played cards cannot return to this round again.

It is important to work with this knowledge, and remember which cards were already played. Accordingly, you can modify your strategy, because you know, that this card could not be held by anyone else. And if you use this knowledge correctly, you can even plan whole play in a way, that you are the last to play a card, when game reaches a blind end. You can then play again as a reward. Nice! And this one card can sure make a big difference in the end.

Players have from 8 to 12 cards in their hand at the start of the match, depending on the number of participants. Accordingly, it also determines the length of the game. Given that all play simultaneously with only occasional breaks, it is clear that one round will not last long. And what about the time before someone becomes a winner? You can set yourself the target in point value. So this gamelength is up to you completely. 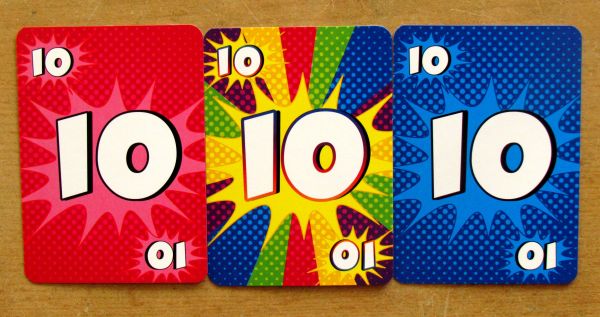 In the game, you can strategically plan the order of your cards, to use for tactical pauses or to guarantee you a double play. Last but not least is usage of ZAP card. Overall, the action revolves not around the observation, but the ability to respond quickly to game development. You can play easily with young children, who already know the numbers up to ten. They will find most fun in Zip Zap.

Zip Zap is simple and nice game, that has finally acquired our interest in speed and direct play games. Although we do not find this type of game, where all players are simultaneously fighting for their place in the sun, somehow so much fun, Zip Zap became a pleasant exception to our opinion. Maybe it’s the little bit of hidden strategy, that is needed this time and a better system for playing cards, than is other chaotic games. It is this little less amount of chaos, that will allow you to play the game better with children. And therefore it will entertain you as well. The chances of being hit by a lightning is small, but the greater is the chance, that you will like Zip Zap, a lightning fast game.

- luck in card draw affects your chances on winning

Zip Zap is a surprisingly good game, where are players simultaneously trying to get rid of cards in their hand. They must make together a straight up to ten and then start again. Game contains also a bit of strategy, when you are able to follow cards, which were played. But also order of your cards can have a big influence. Player, who plays a ten, ZAP card or last card, before getting stuck, gets to play again. That makes space for decisions, but you must not delay at the same time. Quickness is important. Players gather penalty points for cards remaining. Whole match is fun, because you block opponents in their turns and can watch their faces, when doing so. While maintaining simplicity for children, game is still a challenge for adults. They will not ask for a match, but will be happy to play Zip Zap with their children..