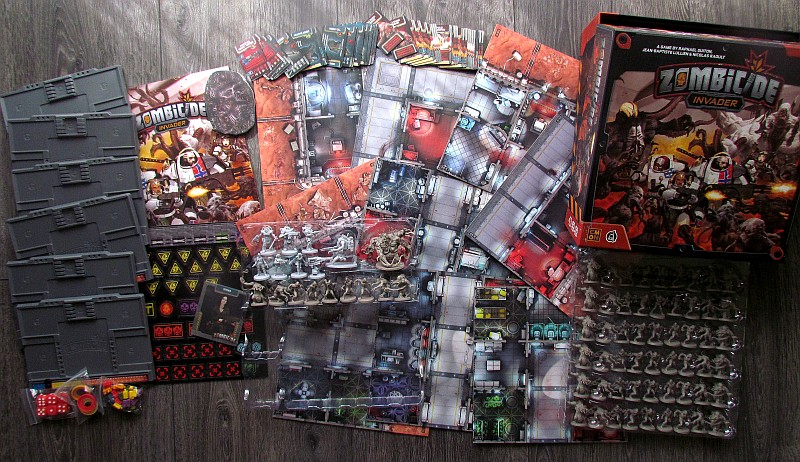 The contagion on Earth has reached such a level, that the only solution seemed to be an escape from our planet. Go to places the undead can’t go. Humanity launched hundreds of ships and they headed for a few selected worlds. Ours landed on the planet a myriad of light years distant. In a place, that seemed to be our real new home. Almost a paradise. But then it all came back. Instead of escaping, we are kept captive again.

The Zombicide Invader is a continuation of the saga that tells of the zombie contagion and extends from the Middle Ages to the future. This is the time, when the new Zombicide series takes place. The game brings us a brand new sci-fi theme, but promises everything we already know so well. Raphaël Guiton, Jean-Baptiste Lullien and Nicolas Raoult are again signed under the box. Created by CMON, the game was successfully presented to fans at Kickstarter and now the box is heading to the market, even to Europe thanks to Esdevium Games.

The box this time leaves nothing to chance and is really big and its weight corresponds to it. On the lid players will find a dramatic sci-fi scene and underneath it all the equipment they are used to in Zombicide. So it starts by looking at miniatures, everything continues with a flood of cards and tokens until you finally work your way down, where the two-sided boards with the game environment are hidden. 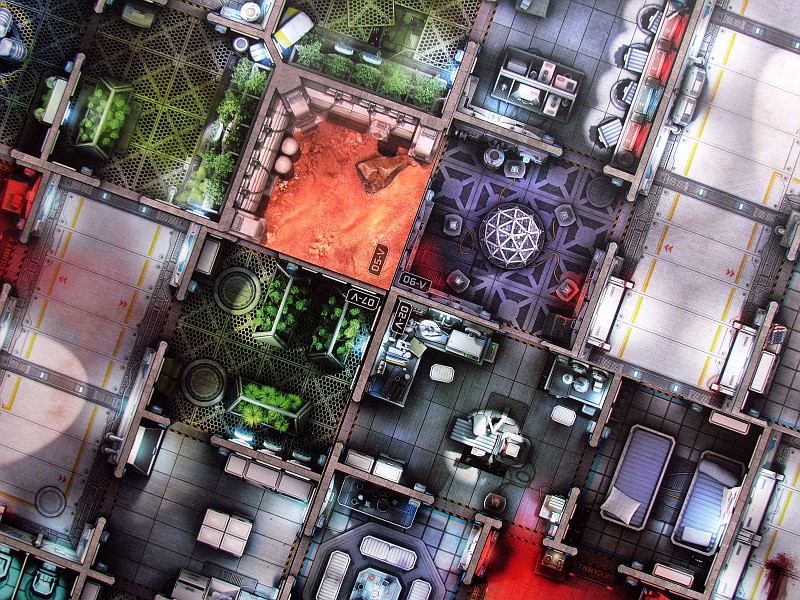 So let’s review, how this game of Zombicide actually works. Players each embody one hero, an unfortunate man surrounded by hordes of undead. Individual characters have items that can be found and changed for better during the game. Heroes improve with every intruder killed. The game is simple – players take turns and move the figure on the map, they can interact with their surrounding environment. But the basis of all the tension is the noise, that heroes produce by their actions and thus attract the attention of extraterrestrials. There are new opponents incoming always on the map, which players must fight off together and try to fulfill the task they were given. The individual games differ from each other mainly across the scenarios themselves, each with different setup and goal.

The start of a new game is actually similar. According to the chosen scenario, players will spread the prescribed boards on the table and create an environment for their adventure. They then place tokens of points of interest on specified spaces, that have to be reached, but above all the starting positions for themselves and spawn zones for monsters. All the prescribed heroes are then divided among the players. They all have to participate. Everyone gets a plastic player board, their character card and pegs to mark all scales. According to the card, players register their armor status and indicate the basic level of their skill with the second peg (other serve are reserv efor now). The team divides the starting equipment cards among themselves and each player places these cards in his spaces on the plastic board. Aside, players need to prepare decks of cards, especially a shuffled pile of Xenos, as the dangerous creatures are called. 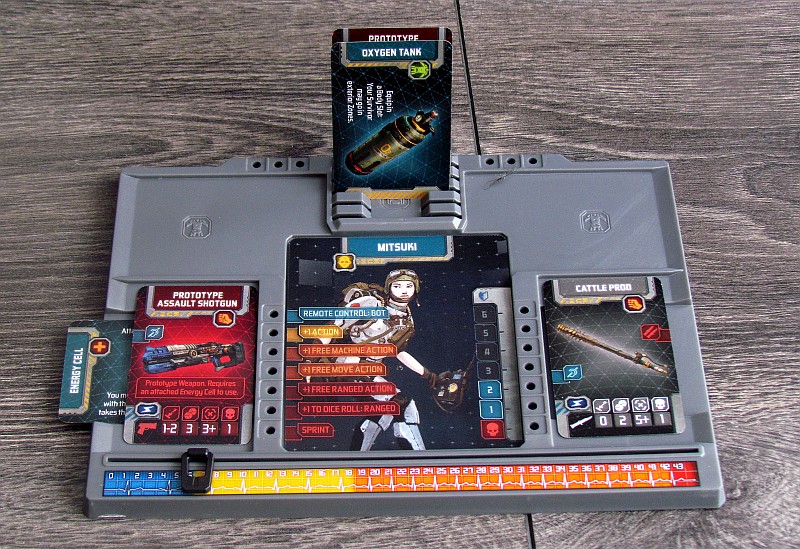 The game proceeds similarly as described above even with the new version. Heroes can attack melee or ranged. But firearms need ammunition to be used. However, because it is a sci-fi game, there are also weapons, that work on energy.

Some weapons are noisy, while others are not. As a result of their use, the noise token must be placed where shooting or rumble occurred. Mainly, however, the weapons differ in the number of dice, the player rolls when using it, as well as numbers, that must be reached or exceeded on a die in order for the hero to mark it as a hit. However, line of sight should also be considered when planning an attack.

Every defeated creature brings one point of experience to the one, who gave it the last blow. As soon as the warrior gets enough experience, he not only moves his power indicator forward, but also becomes stronger. At the same time, Xenos’s interest in survivors is also evolving. The stronger the heroes, the more numerous and stronger they get. 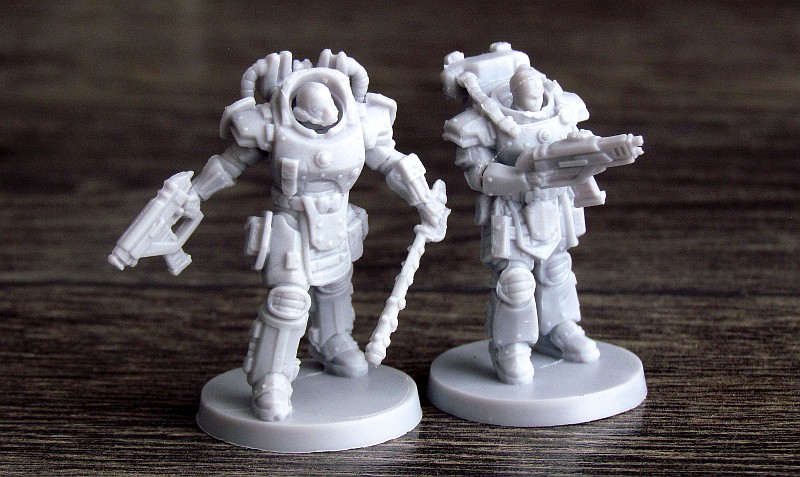 At the end of each round, players must play the Xenos phase. Within it, every enemy first moves toward the noise tokens and then attacks (lowering the level of armor of the players). At the very end, new ones appear on the map, according to the card from the shuffled deck for each spawn zone.

Except for minor changes, it sounds very familiar. Enemies have a total of four species, which differ not only in the number of life points, but also in the ability to hurt. But now it’s getting interesting because the infection itself comes into play. It’s called a mold and can infect any area on the map. This destroys all the tokens and can immediately end the player’s attempts in failure. With the help of fire weapons, it is possible to fight it and prevent its spreading.

Some adversaries spread the mold around them, leaving much more damage than others. This novelty has a great potential to cook the survivors, if you are a bit unlucky or simply underestimate the situation. In just a few moments, everything gets very uncomfortable. It is thanks to her, that the missions are quite demanding. 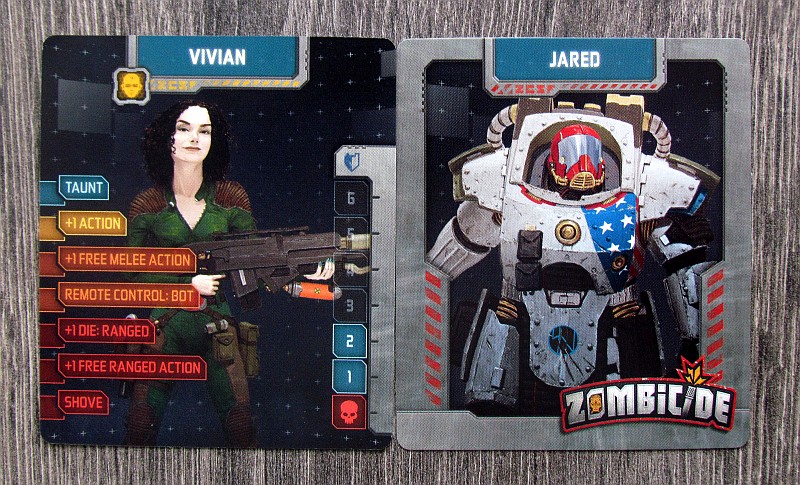 On the other hand, the general balance of the game is surprisingly good. It is clear, that due to the high proportion of chance, players sometimes encounter an insoluble situation, but the missions themselves are well chosen. The adventure is spread over ten missions plus one tutorial for introduction. Individual scenarios each have their own victory conditions, but also modifications of special rules. The missions are also linked into a story.

The scenarios are usually set to a game time of about two hours. Players have the time to immerse themselves in the game. Moreover, regardless of the number of real participants, the heroes are always present in the prescribed number, and thus the game itself is independent of the number of players. They have to work as a team, whether they are two or six of them, controlling each more of the miniatures. The characters differ from each other and have special skills that maintain a sense of novelty as the hero rises during the game. 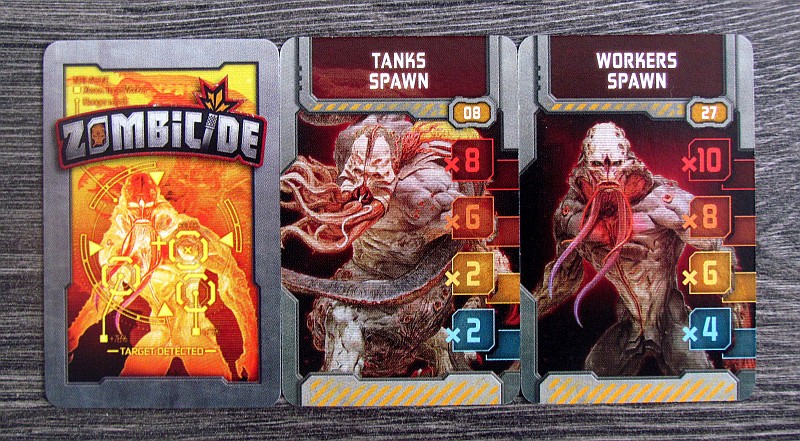 The great news for those who have only one of the first Zombicide players is that they can’t hit teammates anymore. What is new, however, is a concentrated attack, where heroes can combine their firepower towards a specific enemy. This is great if you want to deal with a really strong and dangerous adversary or to guarantee that one of the Xenos will not go a step further. It feels like scene from some action movie.

The new game brings quite unique rooms. Because everything happens on a planet that is not habitable for ordinary people in its current state, there are also pressurized chambers in play. To overcome the door and enter the outdoor environment, players need an oxygen tank. This brings an extra level of tension to the game, because some places may not be available to all, but only to players, who are currently equipped to go outside.

Another novelty is the attack machines. Players can control them using remote controls. These turrets can be an important and decisive point that will allow heroes to cope with the oncoming flood of enemies. 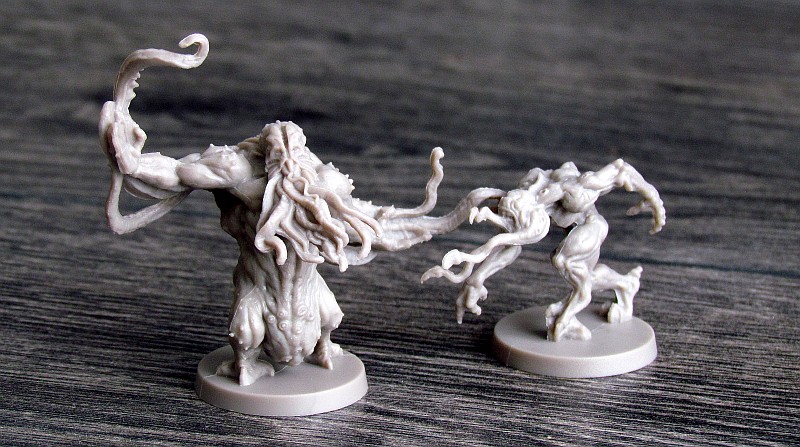 If something is really going well for this game, then it is creating a sci-fi atmosphere. This helps not only excellent processing and successful graphics, but especially individual mechanics. They bring players to the surface of an alien planet and allow them to really think as if they were there.

The version that arrived at the stores is obviously significantly deprived of the box from the Kickstarter campaign. The better news is that the game continues to be great fun and variable enough even with the retail content. It is clear that sooner or later you will go through the missions, win and look for expansion. They are on the market, so there is no shortage of sci-fi entertainment. Look forward to our reviews of other boxes from this Invader series. 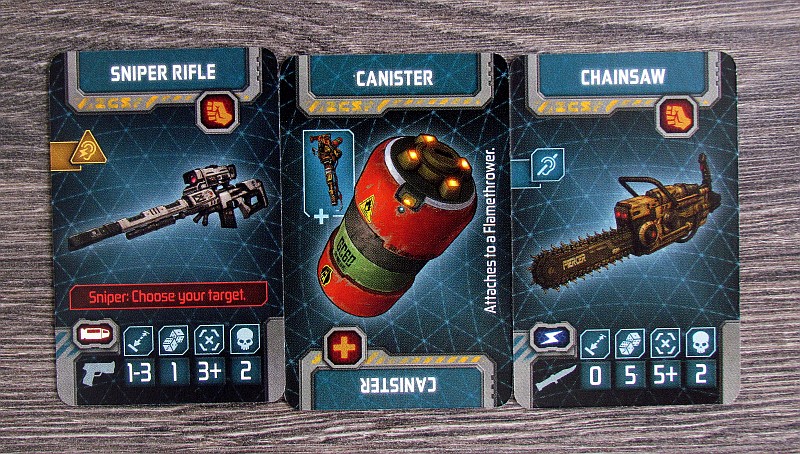 Zombicide: Invader is a beautifully fluent sci-fi entertainment that puts a team of players on the brink of destruction. The new environment demonstrates even more the cooperative mechanism. Though retaining its name, it has left the realm of the undead and shows us a battle with the cosmic race. Thanks to all the above mentioned news, reasonable game time and above all excellent content, Zombicide: Invader takes over the position of the best game of Zombicide universe from the Black Plague. We must recommend it to all sci-fi players!

Zombicide: Invader takes players to another planet and puts them against an enemy they have never seen before – an alien race. It does not want brains and will not infect with bites, but it has other weapons. Fortunately, our team of heroes is getting also some reinforcements, that take the game experience a lot further. The main rays of light are the transitions to the outdoor environment and the main ubiquitous, all-eating mold. Unfortunately, in the game you usually control more characters and have to think as a team not an individual, but the atmosphere is still dense. Zombicide: Invader is an excellent sci-fi entertainment for any demanding player, who doesn't mind chance and rolling dice.

by Dušan on 03. 04. 2019
And here it is! What I have predicted has become a reality. The heroes grew stronger, and instead of their own legs, they are now running through the woods [...]
Comments
Leave a reply