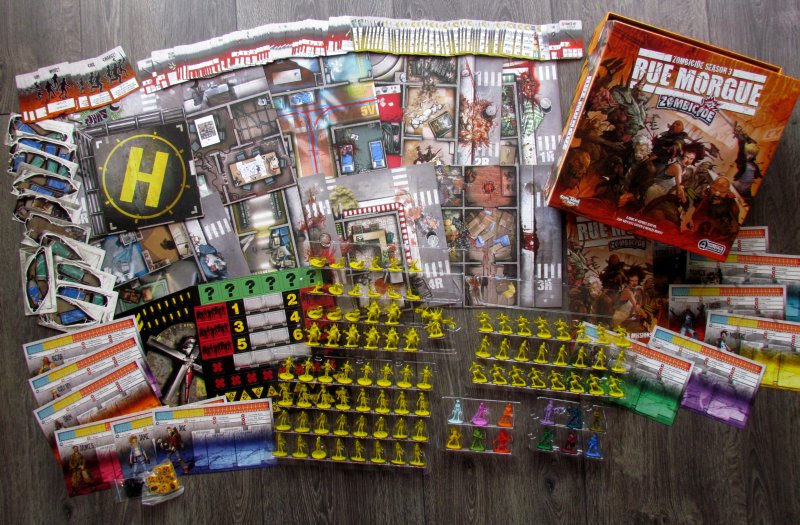 Morgue is one of the places, where you will definitely not go voluntarily in case of a raging zombie infection. It’s a building, where risk is bordering with certainty, that there table will be something, that is no longer dead, in some closed box. And it looks like an offense against the laws of nature. In place of nervousness and uncertainty, fear started.

Anxiety must be your friend, if you return again to the world of the undead. There is a third series of the popular Zombicide series, behind it stands group of three authors: Raphael Guiton, Jean-Baptiste Lullien and Nicolas Raoult. Guillotine Games published their creation and server via Kickstarter under flag of other company Cool Mini or Not. Third season is fun for year 2015.

We see new heroes on the box, but also new monsters, that gets in their path. You would not enjoy meeting such jagged monsters tonight at the tram station, but here at home, we can calmly and with sense of security open the box and start going through contents beginning with booklet of rules. It currently contains a dozen official scenarios and thus gets total page number to an impressive 64. A truly thick rulebook. However, missions start only from page 45, so there is quite abundance of text. 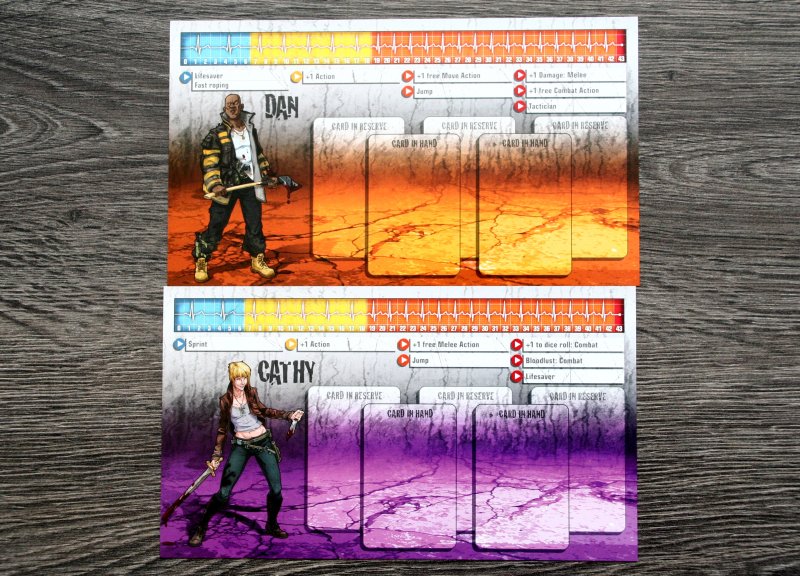 Zombicide is getting pretty big. And yet, authors manage to give each new season exactly the same look and feel in the packaging, with help of two cardboard boxes and one plastic holder. Inside those two boxes, you will find a neatly arranged pieces of heroes and undead. This time, there is quite a pile of people and there are also monsters of all known kinds, ie walkers, fatties, runners and one giant abomination. And then you find new figures of crawlers, which we will talk later about in the changes section of our review.

New are also tent cards. Rest of cards represents equipment, reinforcements or injury as usual, but often with different contents. Larger size have classic character cards, that come with scale and new abilities, but otherwise exactly as we know them. Scale will be equipped with markers moved for each killed zombie to mark experience.

So we can build a world that is under attack by zombies, we need nine large double-sided boards. These in turn suggest new surroundings and rooms. Box includes equipment in the form of doors, noise, experiences, spawning points for enemies, but also new stairs or helicopter. There is many more tokens, but it does not make sense to list them all. 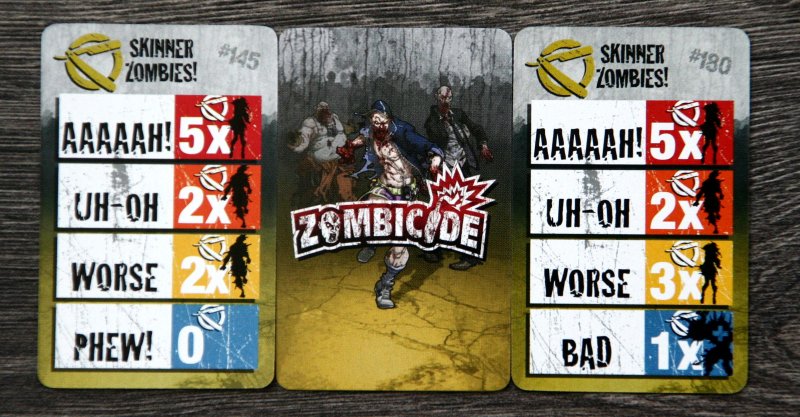 Today we probably all know, how Zombicide plays, but repeat is base of satisfaction. Players work together against tide of enemies and have a specific task in each mission – to escape, find something or arrive somewhere. Often, it is also a combination of more goals and team should therefore work together well and plan. However, game is all about combat, improving heroes, accumulation of items and noise.

This concept must be mentioned in any Zombicide review, because it deserves it. Every sound, that players make, whether it is opening door by force or shooting lures all the surrounding monsters towards heroes. Players move, explore their surroundings and gain items and weapons, that can be used in their favor. But as soon as the enemy appears, they must begin to fight. It is crucial to pay attention to shooting, because there must not stand any friends in target field, because unturned humans are always hit first (according to rules).

Enemies appear and move at the end of each round, after all heroes have a chance to act. Play is enhanced by number of other elements, such as riding in a car or visibility. Heroes can lose, if they all die in a horrible death and return as undead to the world. On the contrary in the event that they fulfill their tasks, they become the winner in one of the small battles of humanity against new desease. But the fight for survival is far from over. 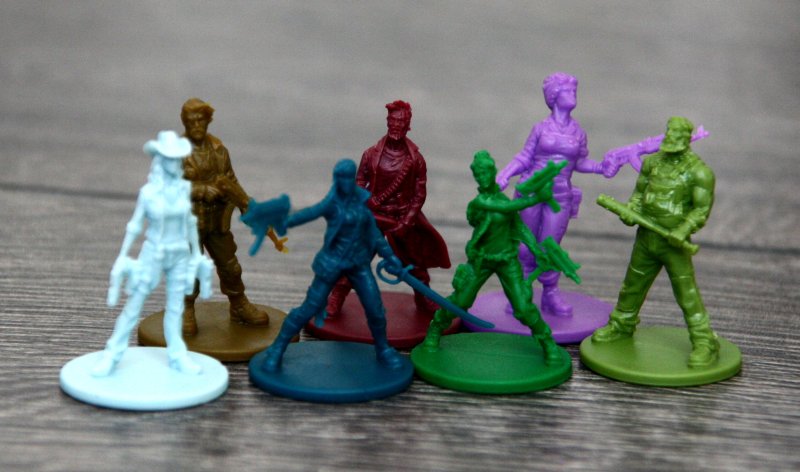 Third season of Zombicide brings a lot of new stuff. Of course, the most attractive are new types of zombies. Because they are all skinners, there is always chance, that undead guy will still not be directed straight towards the cemetery. One type of hit (one per dice) can make him a crawler. Players replace his miniature and he will continue to harass them in the next round, with different statistics.

This new ability to survive intervention carries with it a slight increase in difficulty. Such a crawling zombie is in priority of hit the very last in order. So if there are some other enemies in position with him, its just not so easy to get rid of him. But what is really strong is another new monster, whose miniature is huge and even in the game can reach into neighboring fields. It is not easy to kill and adds a challenge to the game. Its new abomination.

New creature inflow will this time not be easily determined by drawn card. Game introduces a new mechanic, that uses dice and guarantees asymmetrical number of new enemies each turn. Values ​​on the dice correspond to sections of the map, where monsters can appear. And each such dice is then assigned to one card. The rest takes place as before, so you determine maximum current level of your heroes and accordingly to it select appropriate line on the card. 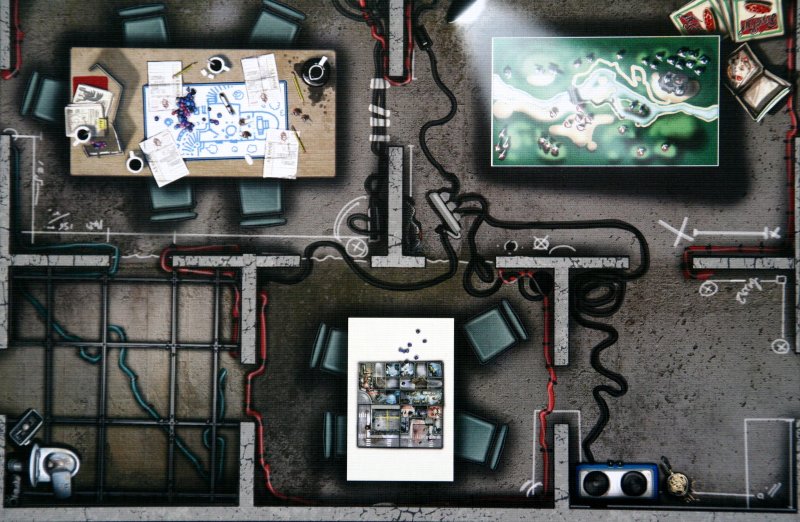 Number of these dice used also simplifies experience for different numbers of players. Table calculates their amount by participating heroes, because one player can theoretically control more miniatures, so number of players is not the right number to go with.

It is good, that no zombies jumps right on you from the newly opened door. Rooms have their assigned events, which are activated during their visit. Thanks to this event, new enemies will be added to the map. This ensures better planning and players do not have to cover each other so much, when exploring buildings.

Among the cards is new stuff as well, and it is thematically appropriate for new season. It brings change, but nothing significant, that would be worth mentioning. This in turn does not apply to tents, which are represented by a little bigger card and add a fresh breeze into the stuffy world. Players place them on the map during setup. They are such a small room in outer space. And when you peek under their roof, you can even expect some hungry brain-eating surprises. 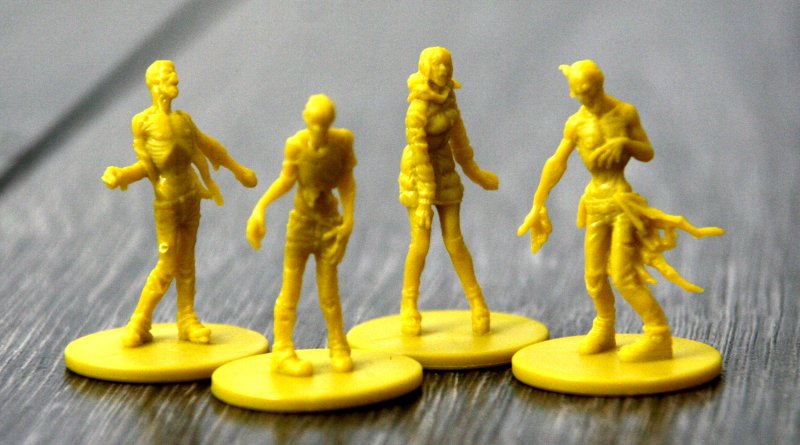 Missions are really interesting, as well as maps, in which they take place. They are quite variable and the players do not feel like it falters anytime, when playing it as a story. Even heroes have exciting new abilities at higher levels, which brings another great variability into the game, when combined with older heroes.

What will not fail us, when playing Zombicide, is processing. It is great. Miniatures are as beautiful as ever and biggest abomination will literally take your breath away every time you meet it. Rules are very detailed and honest. Huge number of examples solves even the slightest doubt about some of the new rules or their combination with previous two seasons.

Zombicide: Rue Morgue is an excellent expansion for all those, who love the original. It offers a heap of fun, interesting missions and new rules to improve the game. Some replace the original, but backward compatibility is always there. Box is overflowing with fun again, which means a clear obligation for all fans of the undead. Zombicide: Rue Morgue is the best expansion for this game, that we had the opportunity to try, and made us really feel there.

+ theme used to the max
+ new system of spawning zombies
+ new characters and items guarantee extension of gameplay
+ excellent handbook of rules
+ events are activated, when entering a room
+ pile of beautiful components

- rules are getting complicated (especially for beginners)

Zombicide: Rue Morgue is next wagon of a train, which had already started its route long ago. But you will not make a mistake in getting in even now. For those outsiders, learning will go slowly, but as you are inside, it will carry you away. This new expansion is playable separately, but you will enjoy it even more combined with some previous boxes. It offers further expansion of variability, but also new rules for zombies spawning. Dice and cards help to create a more interesting undead arrival to the scene. Game is precisely processed and theme is exciting as ever, including new crawlers coming out from under the covers. Zombicide: Rue Morgue is undead entertainment, but its not slow or rotten by any means - its full of life and new experiences.