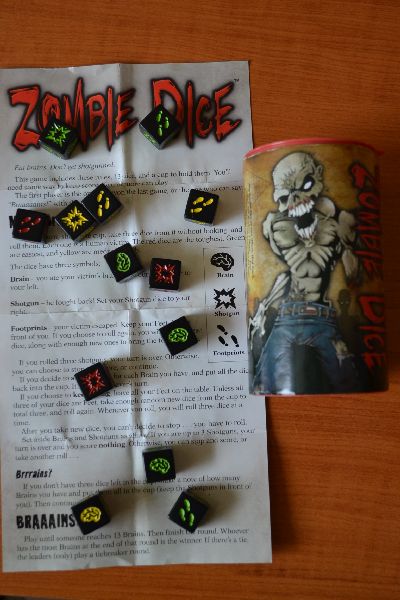 Their tooth (probably rotten) chew recently on this simple dice game and we should be running away. But we will be on the other side, than it is usual in the movies. We will become hungry zombies and appease our hunger with only brains, human brains.

Zombie Dice game is one of the many achievements of the now legendary creator of board games, Steve Jackson, who has created famous Munchkin. He mostly prefers simple rules in his titles, together with easy to grasp gameplay mechanics. With a golden rule, “keep it simple”, we surely agree with him, but with one small reminder: everything is measurable. And how much Zombie Dice exceeds or falls short of this measure is explained in today’s review.

Immediately at first glance, you are looking on interesting case, in which the whole heart of the game hides. It is designed very cleverly. It works also as a good storage of all the game components for the future, but it serves also as a gaming device itself. The box is done in an oval shape, so it is rather a kind of cup, used for proper shaking of dice.

Once you pull the lid, you will not be too surprised with its contents, perhaps rather disappointed. The only thing you will find in the cup are dice (exaclty thirteen of them), followed by the rulebook. Absence of tokens or brain miniatures, for which you fight throughout the game is pretty striking in our opinion and mainly lowers looks of otherwise nicely processed game.

But what is most important about dice game, are of course dice and they are done perfectly. They are decorated in three different colors, green is the most present (6 pieces), there are four yellow and finally “only” three red dice are waiting for you in the cup.On each dice, there are three embossed pictures. One of them represents brain, second a shot and third serves for running.

And now that we have an overview of the dice, we can look at the game itself. The goal is clear. Race to appease your hunger and eat brains of the first thirteen people you catch (= understand as geting thirteen points). Whoever does that, wins. 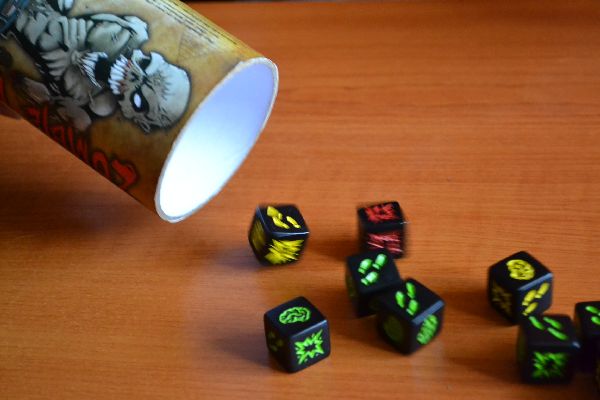 The very beginning of the game will tell us, that the most important thing will be a taste of good atmosphere and fun. Player, who imitates zombie the best and can say “braaaains” with most flavour starts the game. Player then takes the cup with dice and shuffles them properly. Finally, he pulls out three dice from the cup and rolls them. Each player’s dice symbolizes his victim and therefore he wants to roll as much brain as possible on the dice. Each cube with a brain is placed to the left and player obtains points for these at the end of his turn.

If he gets three shots from a gun, that means he is chased away and loses all brains acquired this turn. Hits, as well as brains, are returned to the common supply. The last symbol of the track means, that the victim ran away and player with the dice will be hungry until his next move. By now, you’re just mindlessly walking dead ripe, but now cogs in the brain pierced by worms begin to come to their screeching turn. You will now have the opportunity to influence the game a bit.

The only possibility for players to influence the game, is namely in the choice of whether end their turn and eat up (= write down) all brains obtained this turn, or whether player picks up three dice again and rolls them, taking more shots and collecting more brains. Although this is only a trivial decisions, result is quite complex and thrilling. Players are usually unwilling to risk loss of all brain obtained in this round. On the other hand, if you conclude your turn with collected brains, game is not lost and you find yourself closer to the thirteen eaten brains. But you also give your opponents opportunity to hunt down their brains. It still, however, has no idea and soul, does it? 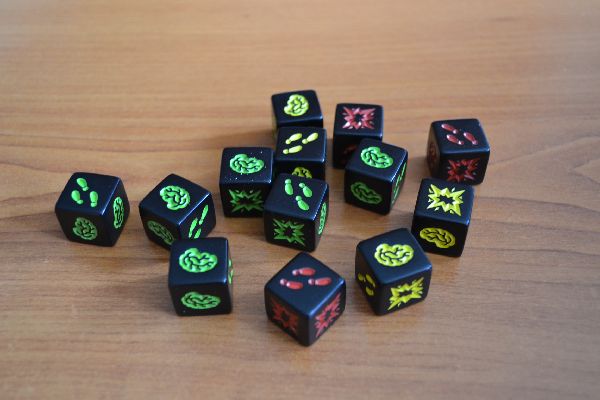 At this point a very smart feature comes into play. Up to three colors of dice, as mentioned above, are in the game. A cube of each color has a different ratio of images. While the green dice symbolize easy prey with most brains and only one hit, red dice (humans) are very difficult to hunt down and have more shots, than brains. So before you pull dice out of the cup, you know in advance, what are your chances to get dice, you prefer. And you can choose to stop. Do you still find it too little for having fun? Yes, there is still one important element about the decision, but that’s it. The game is ending after someone collects thirteen brains or more. After that, all players have one more turn. This implies, that you have to decide, whether to be the first to eat thirteen brains or more and hope you won’t get overcome or rather wait for the right moment and attack from behind.

Although the whole game may seem like mindless dice rolling, you should know, that it is not like that. At first, perhaps yes, but when you are coming to an end of match, you got swallowed whole by tension and fear of the result. You’ll have to take more chances, as tension grows in your abdomen. 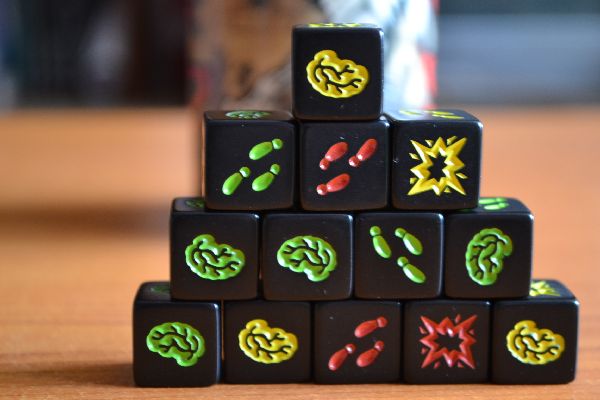 In this game, there is no shortage of very exciting moments, where you rather close your eyes and roll. You hear beating of your own heart and eventually almost get a heart attack, when you hear that all eight brains acquired this turn are wasted due to three shots in a single roll. Or on the contrary, when you overtake leading player on the last lap, getting ten brains in a single attack. Yes, it’s all about luck, but because of it, this game is sometimes, especially in the last turns, an exciting entertainment. This does change with time, when receiving strong feeling of frustration that you can play, but you can not completely control the outcome. A frustration will very soon lead to stereotypes and same group of people will probably not play this game again.

It serves its purpose as a filler between bigger games and the same goes with good social mood. This game is also quite dependent on the atmosphere. Players should support it and then, in combination with dice offering stress, may the atmosphere at the table be really thick. We recommend, for example, telling stories about your zombie eating brains and where is it going to go next. That, however, all depends on the players and their apetite. 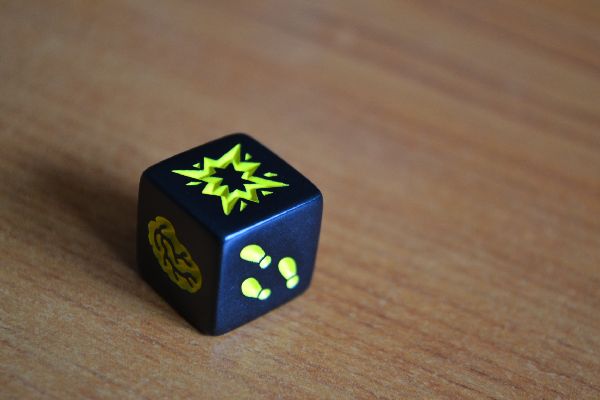 Zombie Dice is in addition to the high randomness and short game time specific in one more aspect and that is the number of players. Publisher provides us with incredible number ranging from 2-99! And although it is theoretically possible to proceed in this number, we thing more than five players is too much and game becomes quite boring affair, when you have to wait for your next turn. In two and three players, game does not work at all, as it lacks interaction between players. So four players are sweet spot for this game.

Zombie Dice is not languange dependent, which is quite understandable in a game like this. Rules can be understanded immediately and it will easily lure player in with a nice theme. Unfortunately not for long.

+ cup is also a box
+ good dice quality
+ simple principle
+ distribution of cubes in three colors, according to difficulty
+ strong theme and atmosphere

Zombie Dice is purely luck driven dice game, that contains almost no decisions and players themselves have hardly a pinch of tactics at their disposal. On the other hand, every game creates exciting and unpredictable outcome until the very end. In addition, the whole game has a strong atmosphere full of laughter, but also fear. This is a pretty controversial game and players have to consider their own taste. Some will completely fall for it and others will not play it again. Unfortunately, few people will want to play more than one or two games in a row, which is the biggest problem with such short game like Zombie Dice.