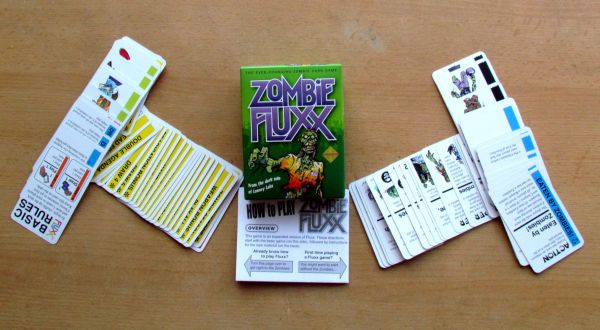 Do you like zombies? They are not just creatures, that you take home as a pet, go for walks with them, feed them and let them sleep in your bed. No. They are dull and slow creatures, whose sole purpose is to eat your brain. Their existence has no other meaning. Shuffling steps accompanied by protracted moaning usually warns you against them from a distance in advance. But if you happen to bump in such creature, then you most certainly would need help. Now we provide you with a handbook on how to successfully defend against them.

The guide is called Zombie Fluxx and offers exactly the chaos, that would rule society, if the dead should walk the streets. Its author is Andrew Looney an it is in fact a card game. Fluxx has a long history, which we have already mentioned in our last review devoted to Star Fluxx (review).

Today, we return from outer space back to Earth, but our planet is not, like we remember it. It has new dangeours inhabitants, that live here now with the people, although they relatively slow. They are called zombies and feed on human flesh and brains. And your goal, when you return and discover Earth like this, is to try and survive in this world and yet win against your human opponents at the same time. 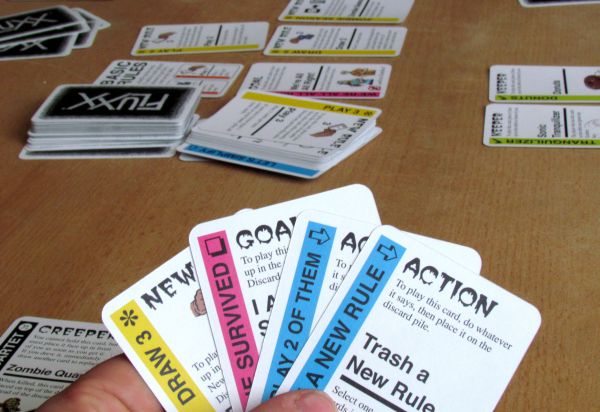 You do not know, how this situation happened, it may be some virus, drug or just Gods will. But now, you have no choice, but to hunt down zombies. Reading more of this review requires knowledge of the principles of card game Fluxx, which you can read our review on Star Fluxx (review).

Zombie Fluxx arrives to their owners in a small green box divided inside into two piles by a separator. It has pictures of zombies on it, so it may attract or repel attention. You will find classic cards for Fluxx inside: events, rules, goals, keepers and creepers. That is all, what we would expect from classical Fluxx and that we will get also with zombie pictures. But luckily it does not stop at the pictures only.

But you will maybe notice several key differences, when browsing those hundred cards – most rules cards have different names. Some of them are wearing several icons – keepers have a POW symbol on them, meaning that the card can be used as a weapon against zombies. Smiles on the other tabs are only for review – either you will benefit from the presence of zombies in the game or not, when these cards are in play. 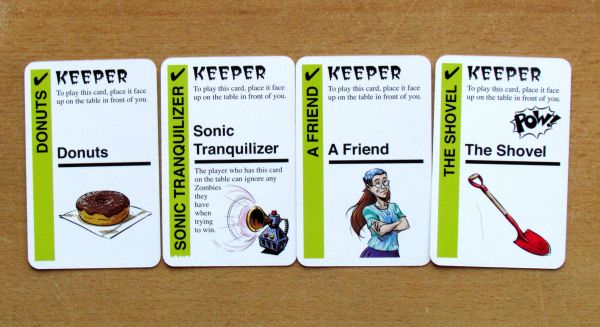 But the basic principle of the game is all the same, as we know it. First of all, like the most Fluxx card games, you start almost without any rules. Only players themselves determine according to their tactics the direction the game, with the rules and goal cards. This is a decision, where the game will take you this time. Until then, you must find out what cards you need to keep in your hand, when keeping in mind, that anytime can change number of drawn number and played cards. But there are many other cool features specially tuned to fight zombies.

Players draw again and then play cards. But whenever they get their hands on any one zombie (= creepere), they must immediately play it in front of them and draw another card instead. But zombies are at the same time also a common enemy, which can make everybody lose, as we wil see later. 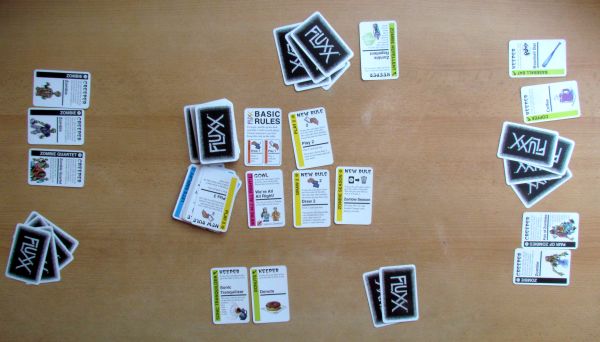 You can encounter four kinds of zombies by size – from one to four zombies in a group, according to the drawing on the card. While you can dispose easily of one and two zombies using any weapons provided from keepers, three and four zombies are much more dangerous. If you manage to shoot one of them, the whole group is startled and runs over to one of your opponents. But that is a good thing in the end. At least for you and can be used in your favor.

Of course, the other zombies and action cards allow you to get rid of the creepers and send them to your opponents. Any zombie you usually have in front of you, prevents you from victory. But there are cards, that will make them friendly creatures or even make you a zombie collector. You can only with with zombies by your side then.

The winner is the first player, who can achieve an active goal. However, all players can be overwhelmed by zombies and lose the whole game together as a group, if the table contains more than five zombies and you get an UNGOAL card. 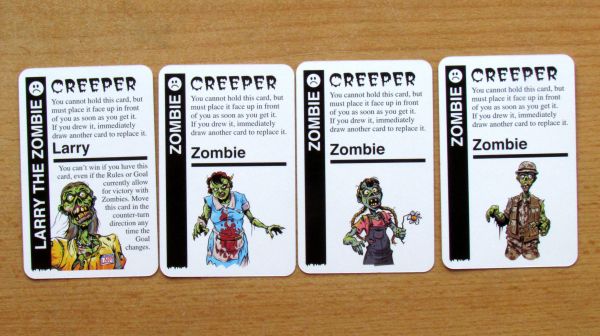 Zombie Fluxx brings a wave of changes to this chaotic world of fluxx card games. The game, of course, is still primarily about the players attempts to meet currently active goal and many many interaction between all of them. They should keep the good goal in their hand and play it along with the necessary keepers in one turn. That is the common winning strategy. But this time, you cannot concentrate on collection cards so much, because creepers influence is far greater than ever before. First of all cards with a black stripe (= creepers) are here in larger numbers, than in any of previous games of Fluxx family. And zombies can even prevent you all from successfull victory.

With the growing number of enemies grows also the influence of chance. And because the package consists of another proportion of cards, there is not so many goals, how much we used to. The game is a little more stretched, mainly due to played zombies/creeper cards. But on the other hand, players must try to shoot them and destroy (= put on the discard pile), or risk losing as a team.

As we have mentioned at the beginning, most of the rule cards have separate names. That means, that by the end of your game, the table will be flooded by new rules and you will have difficult times to follow them all. 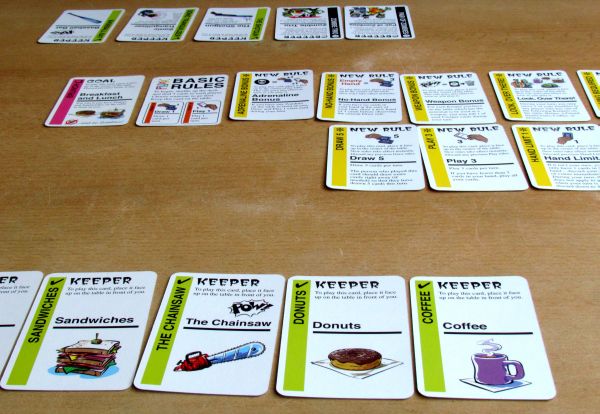 Zombie Fluxx is also the first game of this series, which would, in essence allow cooperative play, with some modifications of course. It would suffice to reveal a random goal and five zombies on the table. If players can join forces with each other and get rid of them, before their number will grow to six or until they get UNGOAL card, then then have won.

Drawings and texts are, as always, full of exaggeration and humor, so it often provides a good fun. At the same time, the humour often arises spontaneously in the game. But we are used to this in Fluxx.

Zombie Fluxx is completely different, that its older brothers. It is exciting, and more and more crazy. The entire game is bringing even more chaos to the table and the players constantly pass undead cards among themselves. The situation is changing with each move and victory is not the result of planning or strategy. But Fluxx is simply such, and if you like it, then it is for this very crazy unpredictability. And maybe that is, why we found Zombie Fluxx really hilarious and successful ancestor of this series.

Zombie Fluxx is Fluxx in every inch of its box and even more. It brings more of everything, what we like about Fluxx – more crazy situations, more humour and even more chaos (although we won’t believe, it is possible). Strategy has no place here. Constantly moving zombies will spoil your every plan in its roots. Everything is rules by luck. Then why do we enjoy it so much even now? It must be the everchanging rules, maybe the theme or quick gameplay. It is not so great with the latter, but you shall still finish one match in quarter of a hour. But the lot of chaos has its consequences – less player control over the game outcome. Zombie Fluxx will bring you new dose of adrenalin into your favorite card game, which was till now only about flowers, animals or stars.