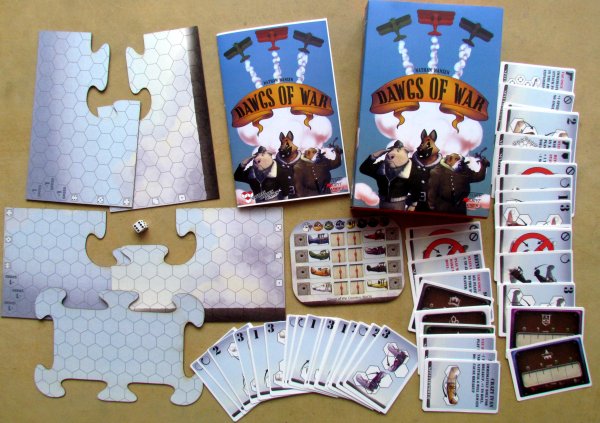 Best friend of humans. Dogs are loyal companions and are seemingly silly. But if government of the world got into their hands, everything would be different. Through a couple of centuries of barking and slavering, they would become civilized creatures. And then, war is not far away, especially when you have sharp teeth and territorial instincts. War dogs are within reach.

Dawgs of War. This is name of new board game, that prides itself on the pun. „Dawgs“ does sound like „Dogs“, right? Author of the game, Nathan Hansen (Rules Lawyer – review), is silently winking at us with this wordplay and revealing true nature of his game. Its about dogs. Their illustration was prepared by Brett Mitchell and James Sparkman. Their work would go in vain, if it was not for publishing house Victory Point Games, who prepared game for publication in 2014.

Boxed version is nothing surprising at first sight. It is a red box hidden in a paper wrapper, where three canine officers are standing under streaking biplanes. After players fight their way inside the box, they find a handbook of rules, two decks of cards, sheet of laser-cut tokens to be punched out and puzzle game board. It consists of hexagonal boxes and creates a side view of the battlefield. 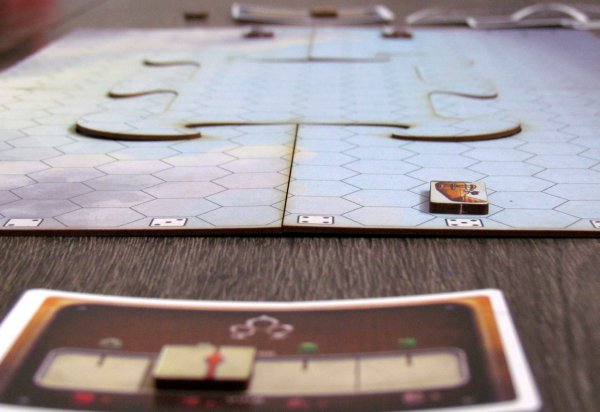 There are eight cards, each allowing one player to monitor status of his aircraft. There is scale from zero to three (speed) on it, but at the same time, it is also associated with vulnerability, when scale moves in opposite direction from two to five. Remaining sixty cards are used to control aircrafts and change flight altitude. Among tokens is hidden damage or speed indicators.

At the beginning of the game, players put game board together and rotate it correctly, with ground in the bottom section. Players (dog pilots) will be trying to avoid with their machines at any price. Everyone will also receive one condition card of his aircraft and position one token on it (starting at one speed) and damage token next to it, without any hit taken for time being. Players get set of cards into their hand, namely six maneuvers and one randomly drawn special abilities. In conclusion, players use dice to determine starting flight level for machine of their color and place them to one side of the battlefield.

All players together play a pair of hand cards – one number (one to three) and second a change in direction (or special skill) in a turn. Everyone reveals his cards at the same time and then one after another rotates his plane according to maneuver card – as many steps as number planned. Each hexagon has a total of twelve directions plane could be headed – each area and each vertex is counted as one step in rotation. Because plane occupies two spaces on the board, aircraft is rotated always depending on its front part. 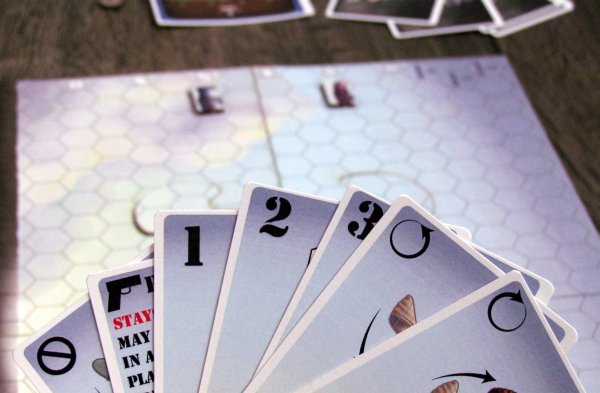 Only after all that, machines move forward so many positions, as is their current speed on the status card. If for some reason, aircraft speed dropped to zero, instead of forward movement, it begins to fall. Speed is continuously adjusted based on whether aircraft is flying upwards and downwards and also how high it is in the atmosphere.

Aircrafts are flying from left to right and vice versa. Once they reach edge of the board, they reappear on the opposite side, as if the whole board was curled into a circle. After completion of movement, pilots have time to properly press button for shooting. If any enemy plane is within range of their weapons (sixty degrees cone leading away from aircraft to distance of six fields), player can roll dice and try to roll higher number, than is its vulnerability value. And this depends on the current speed.

Only if the result is equal to or greater, hit was successful. Player places a damage token on the right-most space in condition card of the aircraft. With each hit, this token will be moved to the left until the aircraft is destroyed. This also lowers maximum speed of this airplane (= shortens speed track). It may also explode after hitting the ground in the event, that a player is not able to handle maneuvering or its speed drops to zero and plane falls to the ground by work of gravity. 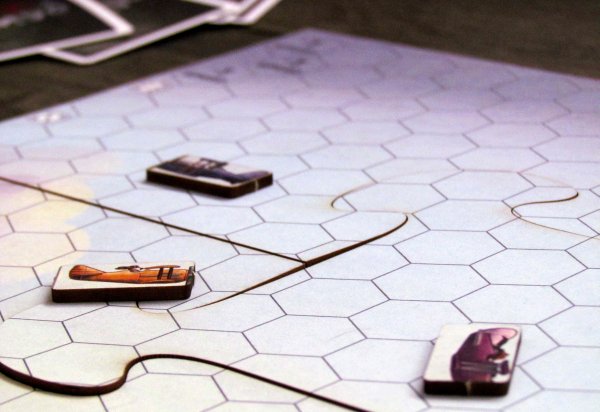 Game ends, when only one player has his own aircraft(s) in the sky. Battles can also be waged in teams. In this case, winner is team, whose aircrafts are the only surviving in the whole battleground and all others are burning up down on the ground.

Dawgs of War is a surprisingly fun game, which can be credited to very interesting maneuvering of the plane. Players must plan well and work with possibilities of cards, that are always returned to their hand. Because of this, there is always enough sufficient possibility and everything depends only on the appropriate tactics.

Subject itself already suggests, that game should not be taken too seriously. And is it really so, which means, that you will laugh together. So if you do not mind laughing at his own misfortune or foreign, this might be the right cup of tea for you. Game is a relaxing 2D shooter, where anyone will not be mad, even when he gets kiled. But that applies only in the case, that you did not drop out too early, because players knocked out of combat is one of the main criticisms, that we can have regarding this game. 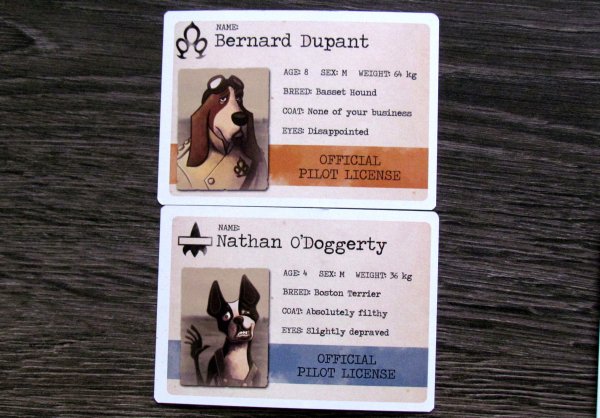 The only decision-making for players each round is selection of rotation of their aircraft. It is not entirely intuitive, because turns are carried out in halves of steps – along the sides and vertices of the hexagon. You get used to it after a while and maneuver as old and experienced pilots. This flight is also very entertaining and simply done.

Variability is brought to this card with special abilities. They are different each match and players get secretly to choose, when they first reveal and use it. This element of bluffing works very nicely. To the contrary, we can confidently say so about a combat, where shooting duel is decided by the outcome of dice rolls. Here is a chance everything will be in the hands of fortune and misfortune every time.

Because game time ranges between thirty and forty-five minutes, waiting for a downed pilot might get quite uncomfortable. Players are in much higher risk of elimination in the event, that there is lot of machines flying the sky. It is also simultaneously the funniest way to enjoy Dawgs of War. In proper higher number. 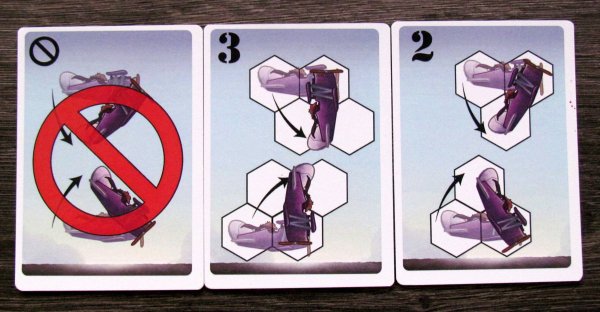 Dawgs of War will not dazzle you with tactical possibilities or complexity. They attack a completely different methyl and successfully achieves this. It is a pleasant pastime, which, although will not be appreciated by all the players, will make a lot of people happy.Simply with its specific humor and reckless gameplay. Dawgs of War bark at you from afar. Bark too and go towards the sound. Somewhere in the distance, a good game is waiting for you.

Review: Dawgs of War – squadron of woofs
Dawgs of War could be described as free for all with airplane in a small space. Crazy, lighthearted and funny game from start to finish. The more players jumps on the aircraft, the better. They all will definitely appreciate having a special skill, that differentiates them from others, in their pocket (do dogs have pockets?). In addition to proper maneuvering of the aircraft (which is done very nicely and in doing so obnoxiously does not make game more complicated), players will also need luck in the shooting, based on dice results. Although players might be prematurely eliminated, which can be annoying, otherwise the game is quite nimble and quick. Dawgs of War is not an attempt for any tactical combat, instead it is a nice relaxing plane skirmish, in which dogs were given a major role.