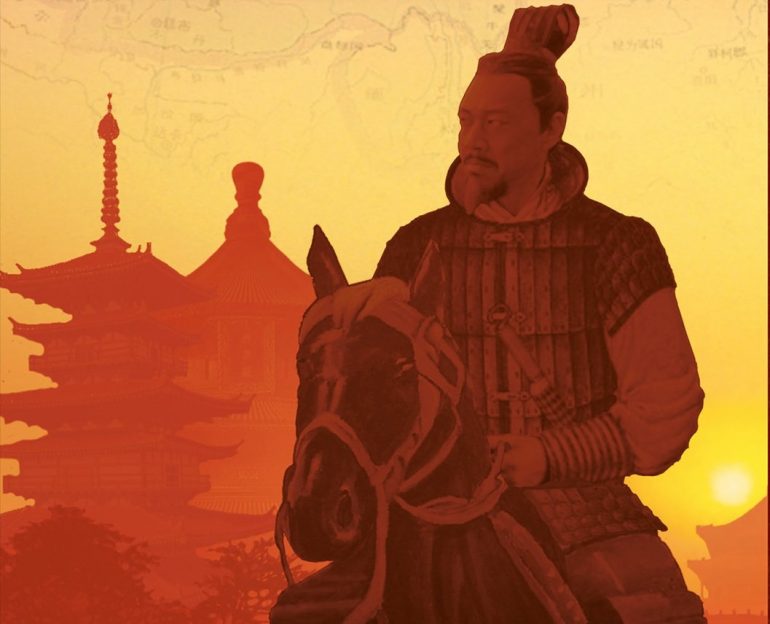 Review: Han – hunt for the reunification of China 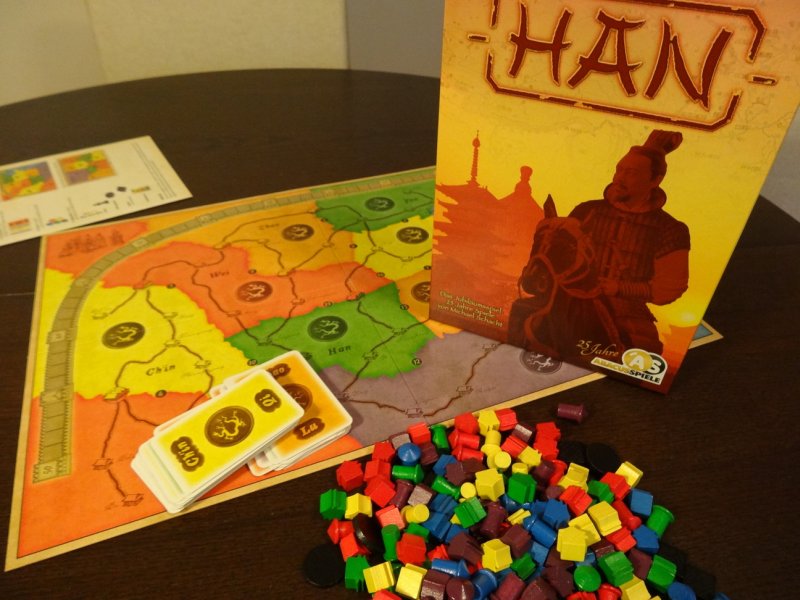 Han is pretty agile and simple game, in which you find yourself back in time 2,000 years and will seek to consolidate and gain control over Chinese provinces to stand on the throne as the sole powerful ruler. You can also choose the option, in which you have to struggle for individual quarters in the capital. Who better spreads his influence and takes some risks, he will see China fall at his feet.

Han is a majority abstract game, which is work of Michael Schacht (Mondo, Africana, Coloretto) and it was published in 2014 by well-known publishing company Abacus Spiele. Han is a follower of the game China, which was published in 2005 and Han compared to its predecessors differs only in details. It is only a facelift more or less (board and rules remain almost identical).

Game is designed for 2-5 players, who are surely pleased by two-sided board with option to struggle for city or for the whole China. In addition to 150 different houses, we also find 60 cards, all in an easy and clear design. Rules are really simple, but with incredibly high degree of replayability as evidenced by the success of re-edition of this game. On the website of the author ( http://www.michaelschacht.net ), there is also available possibility of online gaming together with a number of other alternative maps (Mars, Greece, America, Scandinavia and others), which is also very nice. 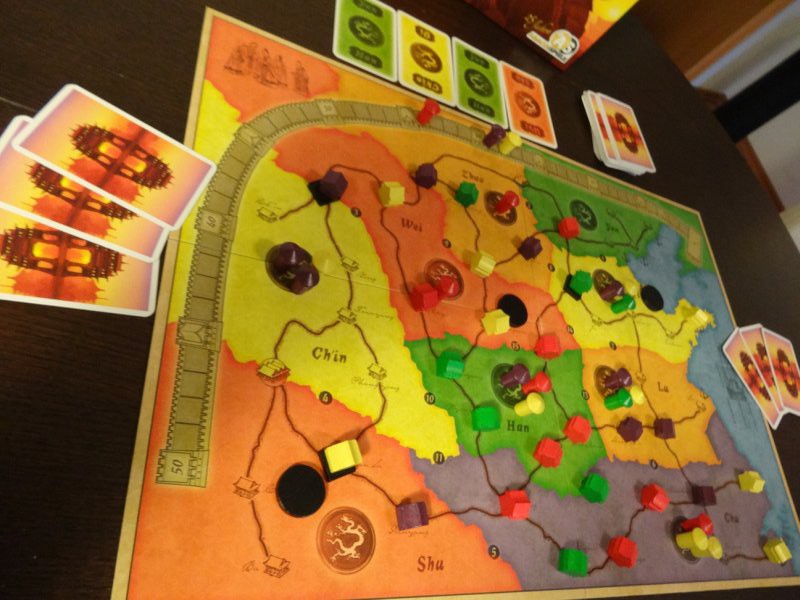 But lets get playing. Principle itself is simple, turns are short and fast, so that you will almost have too little time to think and feel, what other players have done. You always have 3 cards in your hand, that match provinces and determine, where you are placing houses in your turn. After placing one (in case you are first in that province) or two houses, you pick up one new replacement from offer of three cards. You have to think twice and consider not only, where to place house in this turn, but where you will be placing it next time. Another question is, what exactly will you place. It can be either ordinary houses, most of which bring direct points or homes of political influence, which are evaluated at the end. But if you deploy a network of political influences skillfully, you can expect a great profit. Additionally, you are also given points for continuous path of your houses.

Turn follows another, your cards vary quickly (you often play away all three of them, because two cards of the same suit serve as a joker, ie. card of any other color). Every now and then happens, that province is filled and has to be evaluated. Who has the most houses, gets as many points as all the houses in the province. Player, who has the second largest number of houses, gain as many points as number of houses placed by player with largest number and so on. This creates nice friction, when every house is important and every move can bring a different number of points. Ideally, you try to stick at least with draws, because then both players with match receive points. 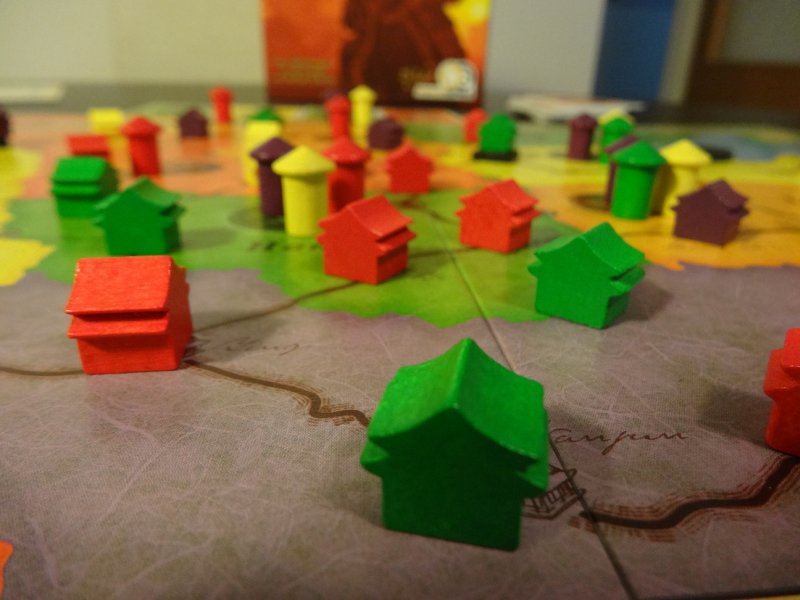 Once drawing deck with cards is empty, game is over and final evaluation commences. Now, also every two neighboring provinces with „political“ houses are scored. If you do have a majority, you are taking more points. Since all adjacent pairs are counted, you can capitalize several times your dominance in some provinces.

Truly great is actually a huge amount of options, when you do not know, where to turn next. Points are everywhere you look as well as need to have power, but you can put only two little houses each turn. You want to play again and again and hope, that someone will not surprise you with his last move, because you were holding a nice consistency and partnership. But opponent begun to usurp the area and won the majority, disrupts your plans and you regret, that you have not gone for the upper hand from the beginning. But there are no sure moves and you cannot simply play safe. You can not win, while playing safe. 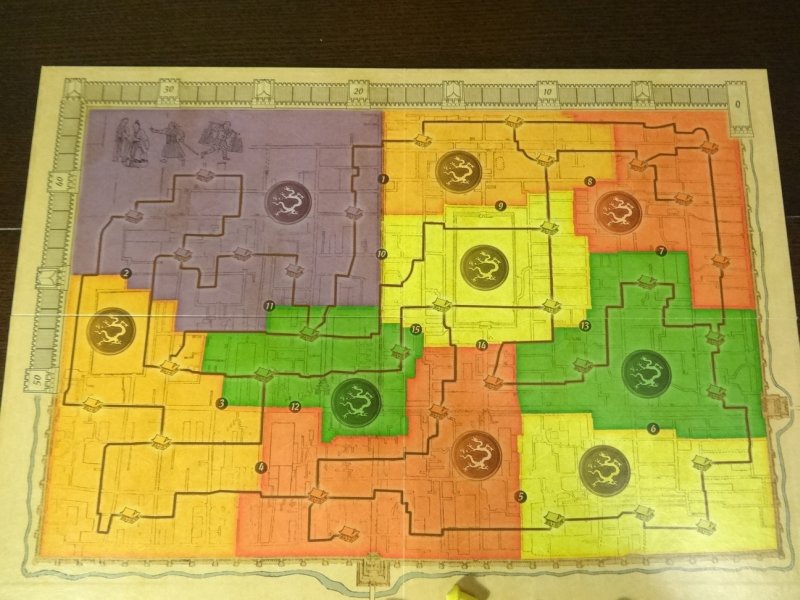 Game is nicely playable with two players (original China has minimum set at three), but with a larger number, of course, comes greater tug and even bigger rush. It reminded me of a little squirrel from Ice Age – „I want all the acorns, and even more, and as quickly as possible, I want to be everywhere and when I was somewhere, so I need to again be elsewhere.“

Game actually has a very nice slope: play house, play house, pick cards and other player is on the turn. Han has power of sticking with you, its easily replayable and certainly can belong to a lifetime collection. Rules are simple and accessible, and game is played in 45 minutes. 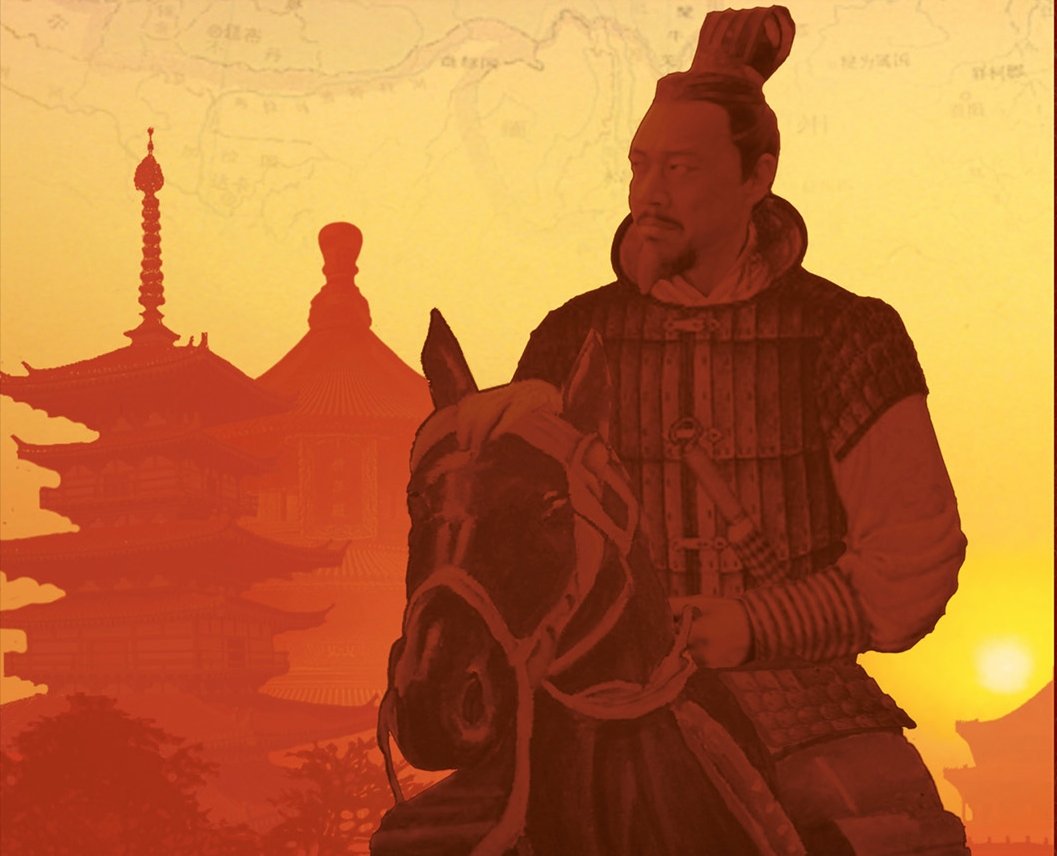 Review: Han – hunt for the reunification of China
Han is a brisk majority game, where everything runs so fast, that it's over and you want to build more and more houses. Possibilities are many and so every game is different. It is not easy to find winning strategy and find a point, where to give priority to political influence ahead of immediate points. I think it's a game, that can find its place both with recreational and demanding players, and can last in your collection until end of the world.

Klady:
+ simple rules and simple concept
+ short playing time and fast turns
+ variability and replayability
+ number of maps
+ need to play again and again
Zápory:
- abstract game without some backstory
- players can cross your plans towards the end quite easily
- similar colors of players and provinces (otherwise unrelated)
4