Review: Nightfall – Dark Rages – for all vampires out there 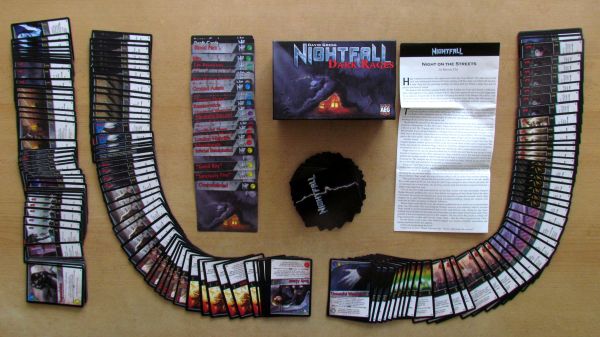 Darkness rules the streets, houses and parks around the world. Previously it would not bother anyone, but today, you will not hear laughter standing in the dark without a drop of light. There is tension everywhere in the air. Outside, there are vampires, werewolves and other monsters silently moving in the shadows, waiting for some human to come out. A common man can only hide under his duvet and pray, that his house is not the place, where they meet.

Nightfall Card Game (review) recently captured our attention with its elegant focus on battles between players and supernatural forces. Each round you must attack, every round you must defend and you’re getting closer and closer to the end of the battle. Without any stretching. It is still primarily deckbuilding game. And as such, Nightfall deserves plenty of quality expansions, as well as its restarted brother Thunderstone: Advance (review).

Both games come from Alderac Entertainment Group (AEG) and Nightfall family has grown a few weeks with one new item. It’s called Dark Rages and it is a second small expansion. The author of the original game, David Gregg, is still behind this one. Illustrations are team work of Conceptopolis, Carmen Cianelli, Edwin David, Jesus Garcia Lopez a Imario Susilo. Some of them made more cards, others less. But still we have to claim, that these drawings have better quality and much more balanced mood, than in other deckbuilding games. 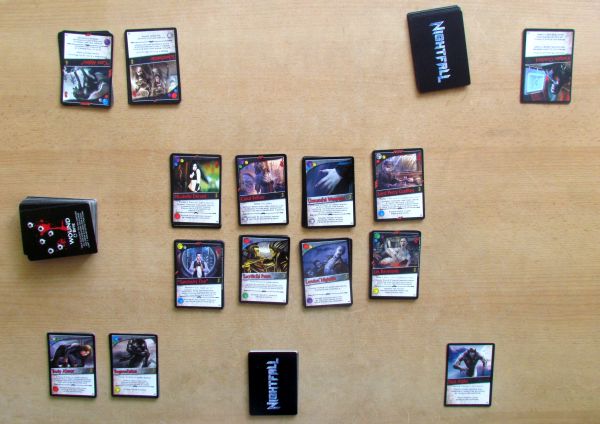 Box in which expansion is located, has small and tall elongated shape, just wide enough to make cards places across fit into it. This already suggests something familiar to original owners of Nightfall. When you put the lid containing image of fierce werewolf away, there is still the same binder system in there. There is one foam ordener and four decks of cards. Actually three, because one of them contain only almost square cards used to organize cards in box.

If you do not know, how to actually play this game, read our review of basic Nightfall game. Players will receive same deck with cards at the beginning of the match, but as the game goes by, they can purchase other ones and make their deck specialized in some way. They always draw a predetermined number of cards in their hand. With their help, they can create chains using colorful round icons located in the upper left corner. Colors must follow the chain and also opponents can add their cards to it, when you are finished.

The row is then evaluated from the last card to the first one, which can often change active player intentions, because his cards go last. The most important part of the game are battles. That means, that at the beginning of each turn, the player must attack. If the attack goes through the defense line, opponents gain wound cards, which will flood their decks. And pushes you forward to the end of the game. The one with most wounds in the loser. 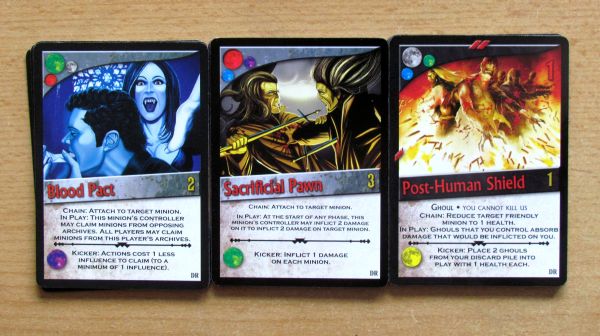 As in the correct deckbuilding game a custom, also here you will find several identical cards for every kind. This way you could buy more, when it comes to the crunch. In total, you will find 24 different cards (12 characters, 12 events) in this expansion. These 24 types are candidates for inclusion in the common archives in the middle of the table. Of course cards are drafted and you get two of them also in your private archives. Only you can buy from there.

But this time, there is more news, than only new cards to buy. Dark Rages expansion presents a new mechanism called avatars to Nightfall. Game offers you a total range of four different characters in three pieces from each. It is precisely these characters, whose skin must players live in for the whole match. They offer some nice abilities, which can be used, while commanding your hordes to comply with your strategy.

Avatars are a great idea and addition to world of Nightfall. Finally you can identify more with the world and live your tale of bloody rise. At the beginning of the game, players draft cards in a way, that they have always choice from more. You can always have only one avatar and the other two cards will drop back into the box. But it is up to players decision, if you retain some of them or whether you return it. Why? 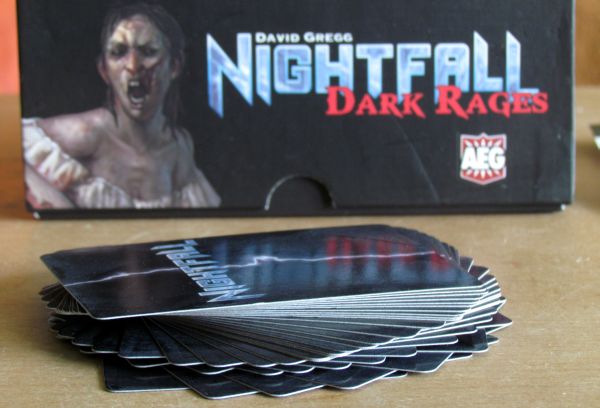 By his selection at the beginning of the game, player basically commits to some specialization during the game. That is, why players choose the card only after draft of both archives (private and commons) is completed and therefore they know, what cards will be in this game. This means, that you can even sometimes decide not to take any avatar at all. But players, which will choose them, will feel more like commanders with these cards and will have better experience from the whole game.

Yes, we have mentioned earlier, that you have some special abilities, which come with your avatar. So why choose not to take one? Each Avatar has not only positive, but also negative feature. And both strongly determine the direction, which will you have to build your deck and fight. Thanks to avatars, you can have a firm tactics and work through a step further.

You probably know, that various factions in the game are mutually supportive. But now a mechanism comes into play, that will force you to really specialize. It is really important now, whether you buy ghouls, vampire or werewolf, because individual avatars are getting bonuses or penalties for them. For example, Vampire Overlord allows you to draw a one new card into your hand every time, when you purchase a new vampire into your ranks. Conversely, if you own ghouls or werewolfs as a vampire and wish to play their card, you must discard one more card to discard pile. And this is the way all avatars work. 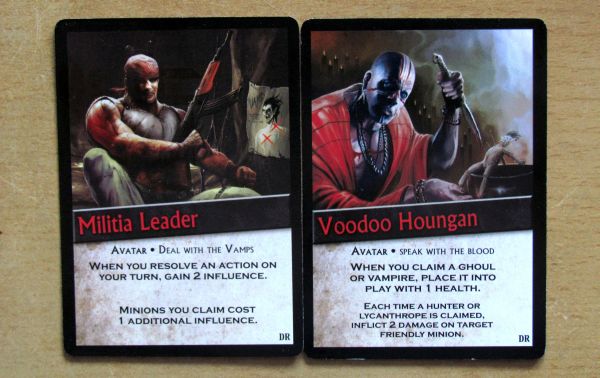 When we look at each card, we will find, that you will find a lot of attachment cards among them (six, half of all actions). They were probably new in any of the previous extension (so far we have not had the opportunity to review new additions Nightfall). You can play them on some of your characters and expand their strength and abilities in some way. Our gaming group liked them.

In particular, the card What Should Not Be, which does an amazing thing – it combines two played cards your into one, including all their properties and texts. Amazing! Imagine, how long will you only enjoy this opportunity and explore what can you create by combining two cards – the options are really vast. Just this card alone will ensure long fun and we believe, that it finds its way onto the table with a lot of non-random setups.

The author also changed terminology on some cards. An attack is now not blocked but absorbed instead, which may confuse some players a bit. There is no mention about this change in rules. 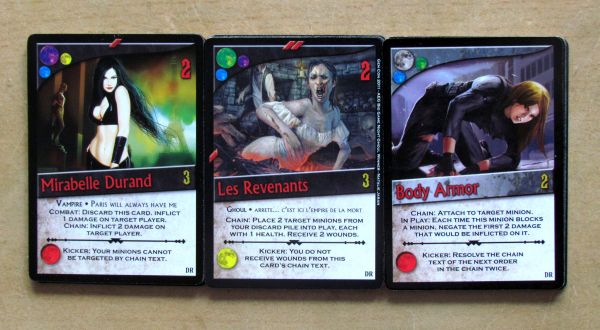 Extension with avatars builds on one condition. That you have a sufficient selection of cards for each race. And you fail to meet it, when you own only a basic game, as we do. Often you will face an annoying penalty, because you as a vampire, have a werewolf in your ranks, or vice versa.

From charakter cars, you will find attractive a woman vampire Mirabell Durand. Ghoul Les Revenants will allow you to resurrect characters from the discard pile. Also action Exposed is interesting, while it hurts every player, who has no minion in front of himself. And we could continue on and on about the other cards and thein effects.

Nightfall: Dark Rages is an expansion, which a great game, such as Nightfall, really deserves. It adds a whole new game element, that greatly increases players experience. But still, we would not recommend you to buy this expansion as the first box after purchase of basic game. But if you have more expansions, and you enjoy Nightfall and bloody fights as much as we do, then this extension is unique and obligatory buy.

od Dušan dne 26. 11. 2019
World of infinite possibilities, where you can crossbreed dinosaur with a pirate. Have you ever seen a Tyrannosaurus putting a pirate flag up? You can have [...]