“Yes, I understand, consider our thing done. Remove the cheeky rabbit that lurks in the central hospital, that mean officer, who thinks cleric robes would protect him, and that wretched parrot who betrayed us. And thanks for the warning about Mr. Tiger, I will be careful. Yeah, I see that those hairy gorillas are swarming the street somehow. “

In the game 10′  to kill you become one of the hitmen who received a dirty job to remove some undesirable persons. But beware, the city is full with policemen and you also have competition – other hitmen who have their own targets, but it is convenient for them to remove also someone who meddles into their business. So your task is not only to terminate all your targets, but also to get rid of your competition.

The game is for 2-4 killers aged 14 years and more and every game lasts about 10 minutes.

In the small box there´s quite a lot of things – rules in English and French, 16 location tiles, 16 character tiles, 16 characters, 3 police characters, 1 reminder sheet, 1st player token and 4 tokens to mark your hitman. All parts are made of solid cardboard and the illustrations are really cool – each character is represented by personified animal – businessman Mr. Tiger is in a suit, the panda is a biker, pizza delivery guy is a crocodile and the policemen are gorillas and a hyena. 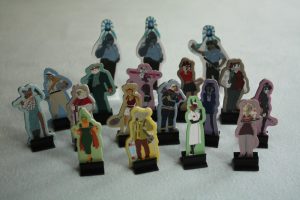 How do you play?

At the beginning of the game you create a playing board with the 16 location tiles. Organise it as you like but don´t forget, that each tile must be attached to at least one other tile.  At each tile you randomly place one character. Then every player secretly draws a character from the character stack placing it face down in front of him with the hitman token on it – that´s the player´s hitman. The next 3 characters the player draws, are his targets. The game can begin now!

Players are taking turns.  In his turn, each player can choose 2 among 3 actions – moving a character (policemen included), killing a character and investigating character´s identity. You can also do the same action twice in your turn, except killing – you can only kill one character in your turn.

Every hitman has 3 weapons – sniper rifle, the revolver and the knife, each weapon has it´s pros and cons and you have to respect the basic rules of its usage that are described in the manual.

After someone is killed, investigating policeman comes to the tile and all of the other character´s go away from the tile. Before you start doing anything else, you have to name all the suspects who could have killed the target with their weapons. Then all the other players are trying to find out, which of the suspects is the real killer. They can capture the hitman or even kill him.

If your hitman is captured or killed – it´s not the end of the game for you. You can continue playing, you can still move the characters and investigate, there is one exception – you can´t kill anyone anymore.

The game ends when someone kills his 3rd goal (finishing the round) or all hitmen are dead or arrested.

At the end of the game you count prestige points for each hitman. If you are alive and free, you get 2 points, for each killed target 1 point, for arresting other hitman 1 point and for killing other hitman 3 points. If you accidentally kill an innocent, then -1 point.

All the games I played (with 2, 3 or 4 players) were the same. For a while all players moved characters through the city and then someone dared to murder someone else. At that moment the other players tried to arrest him and they were successful very quickly, because they were just one by one trying it. When more players are eliminated the game becomes even faster, because the eliminated players have nothing better to do that to try to arrest someone. It is almost impossible to stay free at the end (and no one accomplished it in none of the games we played). I think that the idea is good, but it is necessary to add some rules and make it more balanced.