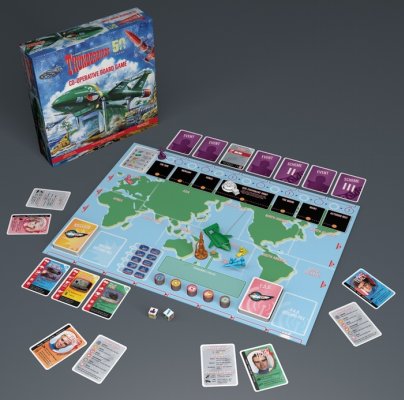 its great to have a chance to ask you some questions for our audience on DeskoveHry.com.

First, I would like to ask: Do you still enjoy making cooperative games? Are there more concepts to explore in cooperative boardgaming?

Oh, sure! I feel like I’ve only just started. The sky is the limit when it comes to themes—cooperative games make great vehicles for storytelling. And I love coming up with novel cardboard-driven opponents for players to face.

I understand, Thunderbirds are based on some famous british TV series. Can you tell us a little about it (its not well known in our part of the world) and also how its connected to the game?

Thunderbirds (the show) featured International Rescue – a secret organization formed to offer aid when all other means have failed. It featured a combination of marionette puppetry and scale-model special effects dubbed “Supermarionation.” The series was created by Gerry Anderson and ran for two seasons in 1964 and 1965.

Thunderbirds (the Co-operative Board Game) lets you take on the role of a character in International Rescue. You can fly any of the vehicles around the world and in outer space in order to complete missions before time runs out.

Basically, the game is about foiling plans of one archenemy, who randomly pops out somewhere in the world to do bad things, right?

The players need to juggle two things: they’re tasked with saving people around the world from everyday emergencies and they need to foil the scheme of their arch nemesis, The Hood. Every turn, players need to decide which missions to complete (saving people in danger) but they can’t lose sight of the disasters that The Hood threatens to trigger. If they fail to complete any mission in time or if The Hood triggers a disaster, the players lose. If, however, the players are able to foil all the disasters in The Hood’s scheme, they win the game.

And players have these gorgeously looking miniatures at their disposal to get there?

Yes, a lot of love went into the production of the miniatures and I can’t wait to get my hands on them. I’m especially excited about Thunderbird 2 since it can hold 2 pod vehicles, FAB 1, or Thunderbird 2 inside of it as it flies from mission to mission. 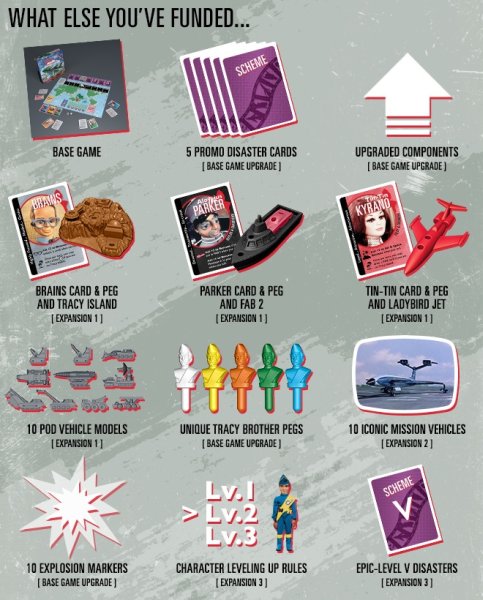 What are the pegs for?

The pegs represent the characters in the game (Scott, Virgil, Alan, Gordon, John, and Lady Penelope) and can be moved from vehicle to vehicle as you assemble the most appropriate team for any rescue.

There is also a map of our world. Are there any similarities with Pandemic gameplay or is it completely different game?

It’s an entirely different game. The Thunderbirds map is divided up into 11 regions (roughly corresponding to the main oceans and continents of the globe) as well as regions in outer space.

But judging from Kickstarter page, game takes place not only on Earth, but also in outer space? How is that possible?

Players can hop aboard Thunderbird 3, International Rescue’s space rocket, to fly from Tracy Island to Geo-stationary Orbit, The Moon, Mercury, Venus, The Sun, Mars, and The Asteroid Belt.

Based on Pandemic, how hard is the game to complete?

There are four levels of difficulty in the base game, and we’ll likely include an even harder level in an expansion. On the easiest levels, it’s a bit easier than Pandemic. On the hardest levels, it’s quite difficult, however.

What will make the game replayable? Are there enough cards/events?

Yes, the game ships with a large number of mission cards, event cards, disaster cards, FAB cards, and characters. Each time you play, you’ll assemble a different cast of characters (and every team plays a bit differently). Your team will then face a different story each time, made up of a different combination of missions, events, and disasters, that come out in a different order each time. So there’s loads of variability.

What are the main properties of Thunderbirds, which make them unique?

Players can fly the super-fast Thunderbird 1 (which gets to missions quickly), fly Thunderbird 2 to the scene (which can carry any one of 12 pod vehicles inside of it), fly Thunderbird 3 into outer space, drive Thunderbird 4 (a submarine) to a sea rescue, or hang out in Thunderbird 5 (in Geo-stationary Orbit) in order to buy time for missions by scanning radio frequencies and collecting intelligence.

My intent with the design was to make it a great gateway game—easy for new players to learn and teach, but deep enough for gamers and hobbyists, to enjoy time and time again. I think it’ll also make a wonderful cross-generational game: adults who loved the show when they were young can share their love of the show with their own kids by playing the game.

Thank you for your time and we wish you success with this game!