by Dušan on 20. 07. 2015
0
previous article
Review: Sentinel Tactics - tension of being a superhero
next article
Review: Wanted: Igor! - Frankenstein searches for a sidekick
Contents 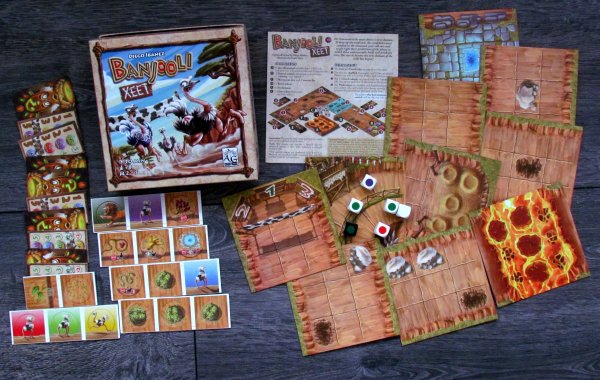 It is not easy to become a shaman. You have to demonstrate many skills to be able to face number of problems, that afflict your tribe. And then there is final exam for the very best. Ostrich race. This is no longer a duel with human stupidity. This time, the best candidates are facing each other and only the best can affect outcome of sprint in his favor.

Its clear, that the winner can be only one. Fortunately, you will not only have to focus on success, but you can really affect the outcome. This chance is offered to you by Diego Ibanez. All ostriches were drawn in speed by Pedro Soto. And game was released by Asylum Games as their second game (in 2013), on the road between first Polis: Fight for the Hegemony (review) and new 15 Días (review).

Smaller box already suggests, that this will not be a challenging game. And who would also expect some serious business, when looking at an ostrich with its tongue hanging out, fleeing from his other two opponents. Inside the box, there is a total of ten large square (two-sided) segments, which each consist of nine frames (3×3). Some are simple straights, others have stones, crocodiles, bridges or turns in their lanes. 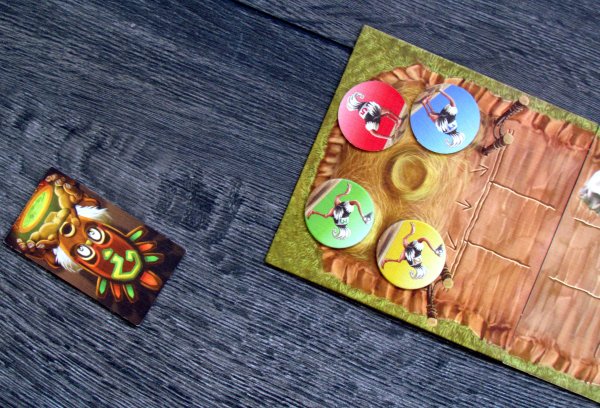 The race will need also ostrich tokens (this time no figures), ranking tiles (first three places and last position), berry tokens and six dice. Five of them are white with colored dots, while the last is black and magical. And then there is only one component lying alone – lion token, which is a mystery to explore.

At the beginning of the game, players build race track as they wish and place ostriches on start positions. Nobody will be bound to color. Each player gets one tile of prediction. It shows order of ostriches, how they should pass the finish line, if it was the only wish of that player. For more casual play, players can also spread a few random berry tokens on the road (face down).

Player in his turn takes all six dice and tryies to get the best combination of colors with one roll. Fortunately, it is not so dependent on luck, because there is chance to repeat the experiment and with any number of dice, while keeping other results. Depending on the displayed dots, active shaman apprentice must choose, whether he wants to move ostrich (white dice) or conjure (black dice). 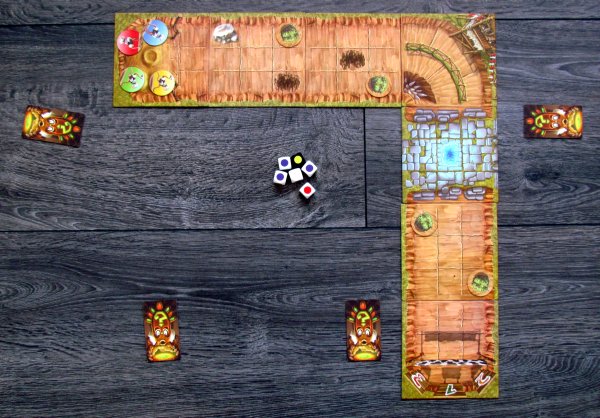 Mostly, players choose movement. He can always opt for one color only. Depending on the number of dots, he then moves forward ostrich token of that color. Simultaneously, he can also determine route, along which a runner can skip over his opponents (but only one at a time), moving forward or diagonally. Strafing sideways is not allowed, because ostriches simply can not do such things. They are always sprinting forwards with their outstretched necks. Black dial with white fillings, then serve as a wildcard.

From time to time player selects magic. In such a situation, ostrich token of color shown by black dice is rotated to the opposite side. Racing animal is put under a spell or vice versa freed from the power of magic. While ostrich is under influence of magic, he can not continue running forward.

So players alternate in rolling the dice, moving ostriches and tries to placed them in the right order. Directly on the prediction tiles, shamans got at the beginning of the race in hands from judges, are also point values for individual placement. Winner will bring five points, when of correct color, second and third fall from four to three. However, last position can double overall points total. And the shaman, who together was most successful, is the winner. 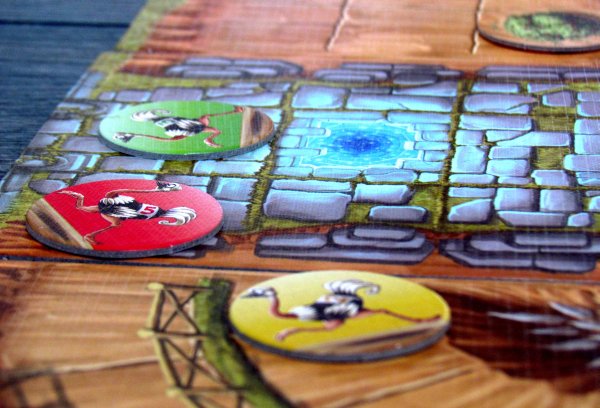 Banjooli Xeet is a racing game, in which you do not have to actually be the one, who crosses finish line first. They have to bet. But its not quite true, because players get dealt their assignments, which determines their wished order. Then it is up to them, to make ostriches run according to it. This mechanism or tips and trying to keep favorites ahead of rivals has recently swarmed us in newsroom. We played Camel Race (review) and excellent Sheep Race (review) recently.

Ostriches will attempt to dethrone both dromedary and bleating curly girls. Place in the sun is only one, although these two-legged sprinters proved fastest of all these animals, their victory will not be easy. Camels have important awards on his neck, while sheep were target of our praise.

This game really brings nothing substantially new into this whole racing thing. Conversely, it remains very simple. However, there is a very important element. And that is control. Player can choose any color, that he rolled on dice and move ostriches accordingly. Therefore, he has a much greater chance to influence real results. That is why Banjooli Xeet is tactical game, than the two already mentioned. 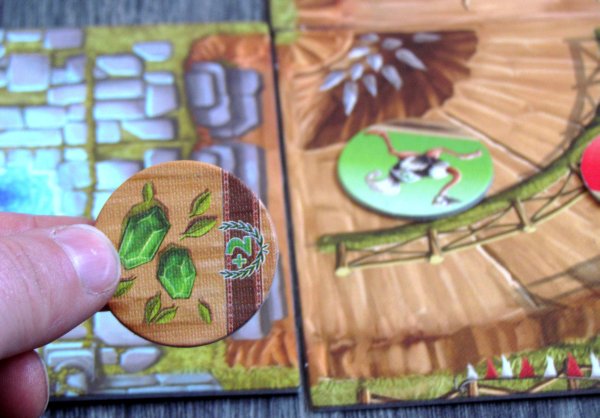 That does not mean, that it is more entertaining. Well, actually, it is not. But do not perceive this one ultimate word incorrectly, because this is not a bad game. On the contrary, it is fun, but the design and atmosphere stands somewhere behind two outstanding race games. Even so, you will race with ostriches and have a very good time. It is, in particular, because of various obstacles, that competitors can encounter. But we are not talking only about special heavy tiles, but also about berries, that brings needed surprise to the track. This is not some clean racing course, but a native track filled with bushes.

Banjooli Xeet is very playful fun. And here, it manages to entertain anyone, who wants to have fun. If you have already set up the track on the table, you will not be bored. Children can learn this game very easily due to its undemanding rules. It works perfectly as a family game.

When ostriches are running, they meet several narrower places, where they can block each other and then jump over other sprinters. Ostriches do not belong to anyone, so players only have to be careful not to reveal their preference. But this time, it is not so easy to see through, what others actually are going for, because nobody has only one favorite, but three. In a fixed order. 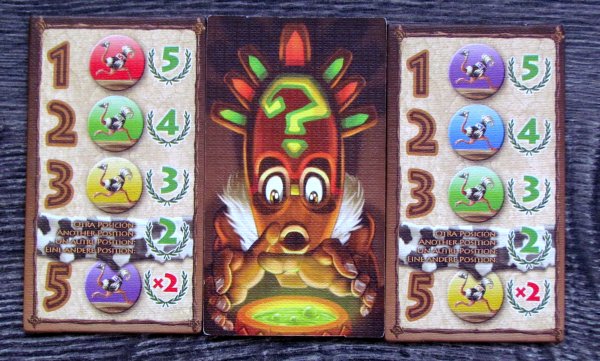 Same number of ostriches runs always, no matter how many players are in the game. But the chaos is gaining momentum with more participants. Their goals begin to fade and victory seems closer. With two players, intentions are better detectable. Every number is a little different, but all work well. Only in more rivals, game is a bit more fun.

Black magic dice seems dangerously strong to us. By putting a curse on ostrich, game suddenly seems much more dependent on luck. If you are unable to unspell your runner (and thus sacrifice your turn), while this one matters to you the most, race could have gone wrong way for you from that moment.

Kids will have fun together, by building and racing on different tracks. This game benefits from the processing, with nice illustrations and alluring appearance. Quality of components is very good and game looks really nice on the table. Its a pity they did not deliver absolute icing: ostrich miniatures. At least made of wood. 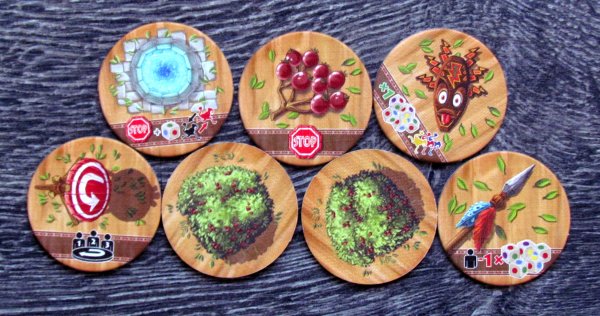 Banjooli Xeet is a solid racing game, that has very stiff competition at this moment. But at the time, when it was published, rivalry was not so strong. If we look at it in the light of situation back then, we probably would have been more excited.Thus it will be only about, which animal you prefer. But beware, Banjooli Xeet is still simplest one of the three.

Banjooli Xeet is first and foremost a game for children. They will build a path for ostriches, put obstacles, berry plants and enjoy roll of the dice. Polka dots are falling, but players are making choices, because in most cases, there is option of moving several ostriches. Everyone is trying to achieve finish order based on his prediction, he was given at the beginning as a small tile. They can even put a spell on ostriches, because they themselves are shamans with powerful skills. Game is fun, even though everything offered was already there in the past in other games. If you do not mind this or do not have such racing game, then Banjooli Xeet will not disappoint. Just know, that there are games out there, that can compete and even be a little better.