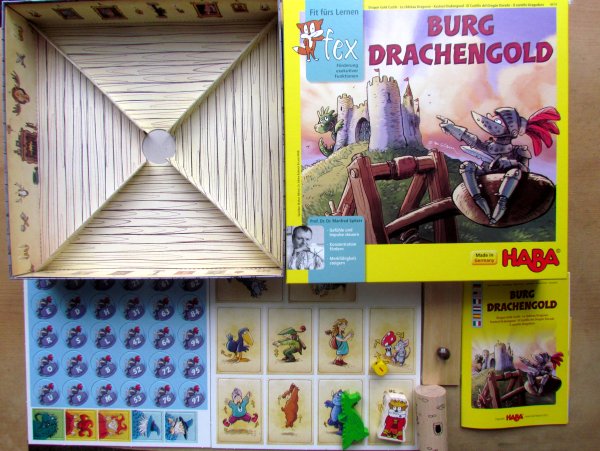 No doubt about it. There really lives a dragon in this castle! So this time, I dragged a catapult with me from one place to another and now it seems, that I am on target. There it is. One shot will finally decide everything. Stretch rope, swing a sword and shoot large stone effectively behind walls. Fire-breathing monster will be surprised directly in its lair.

Burg Drachengold board game (Dragon Gold Castle) offers us just such a role of a dragon-slaying knight. Its authors are Sabine Kubesch, Markus Nikisch and Laura Walk, who created it under the brand name HABA. It was published in 2011 with illustrations by Felix Scheinberger and Sebastian Koch.

Size of this yellow box belongs to bigger games and a square box takes up quite a space. And again, it is because the box will also become your gaming environment. This time, four walls of the box become castle walls. From corners to the middle lead four beams, which have only one meaning – to support pillar in the center. 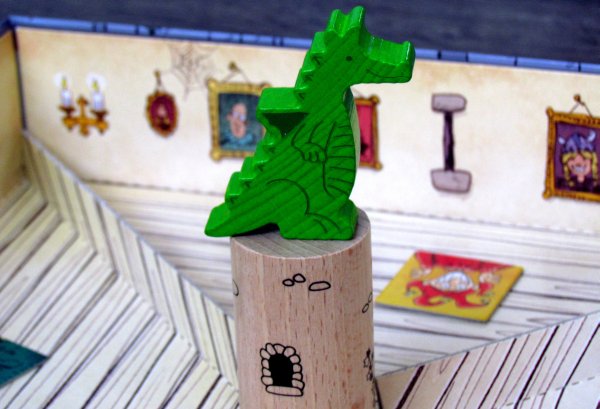 This is place for largest component of all: pretty strong wooden cylinder. Its not empty, but decorated with a sticker. From cardboard then excited players get to more cardboard tiles of different shapes and images. Only some of them will be used for basic version of the game. Namely tokens representing knights, having assignment on one side (letter or two-digit number). Pile of wooden components contains also a figure of a dragon, another representing the king and one yellow wooden dice. Player will then be surprised also by catapult, which represents a wooden board with ball attached to its bottom. This is, how the knight will be swinging his catapult and firing projectiles on the castle.

But we are getting ahead of ourselves, because players must first lay box between them and place one figure in each of the four rooms – dragon, clown and magician. Center will be then occupied by the above mentioned pillar, where dragon stands. Players take only catapult and knight tokens. All other components are not needed for now.

Players take turns in firing knights at the castle. But first they must take such one token, look at it and read to all players, what is written on it. It may be a letter or number. Only then player takes that token, places it on catapult and attempts (even multiple times) to hit one of four available rooms inside castle. 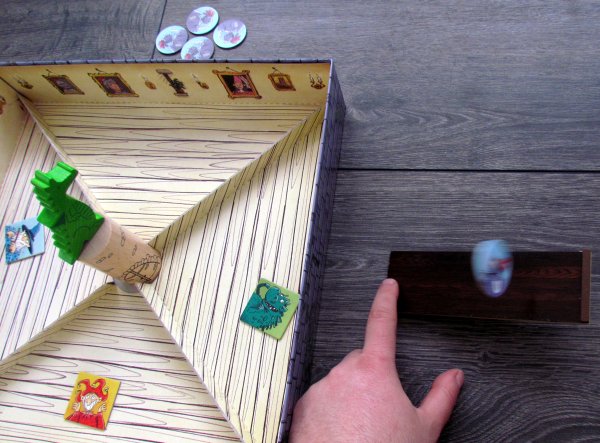 Only after token really falls inside stone fortress, all participants can begin to compete among themselves at the same time. The quickest wins. Everything depends on where in is token located. According to this, players must accomplish various tasks, whether merely repeating task printed on the token or more complex tasks: saying words starting with that letter or adding two digits of given number. Quick response is always necessary, but biggest reaction is needed, when knight falls into room with a dragon. At that moment, whoever catches figure standing on a pillar is winner of that round.

Player with the best responses (and correct answer) gets reward in form of fired knight token. Winner of the whole game becomes player, who first collect four tokens. Dragon is no longer be hungry and can happily go to bed.

Burg Drachengold in basic version is just common reaction game. It combines need to shout slogans and inventing words beginning with a particular letter with rapid catching of a common target in the middle. All in all, this is fun only because it is preceded by a shot from a catapult. 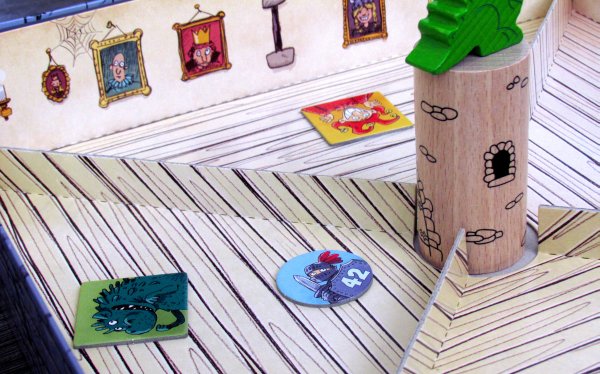 But that is not all, that dragons can offer to you. You can find a decent pile of options in rulebook, which gradually complicate the game and make it more fun. There are tiles, that push knights one position in one direction, different mathematical operations, but more especially other inhabitants of the castle. More cards mean more options and suddenly, you got a completely different game. Much more entertaining.

Overall, this can be fun to try with six-year old children. Game helps them develop and strengthen their reflexes and concentration. There is no doubt, that it has a positive effect on children. In doing so, do not worry, it would be too difficult for these young players. Rules allow for very fine tuning of difficulty, which in turn will enable to engage even much older players or parents themselves in one game.

But everything is not only about reactions. Players will have to learn to aim catapult to the desired room and therefore have an advantage over others. They can thus prepare their answer and if everything goes according to plan, it usually means a sweet reward for them. 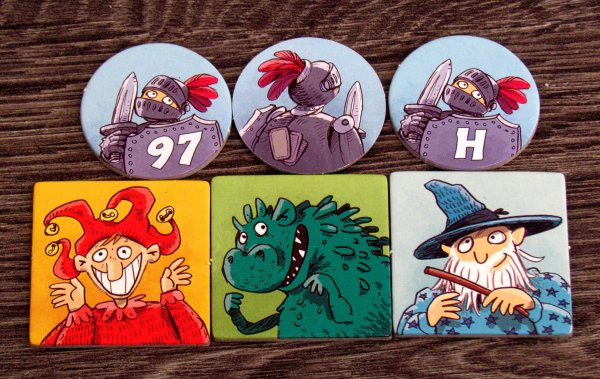 Even with the most complex rules, match does not last overly long. If players take too long to hit castle (in just one or two games, you will be able to aim well), everything ends when anyone delivers his fourth knight and therefore during quarter of an hour. If you thought, this is too short, you can simply extend the game until you run out of knights to fire with. New players have a chance to beat even the most experienced opponents, if they succeed in hitting and will pay enough attention.

Such nice entertainment for children is hard to criticize. The only drawback, that can be seen in this box is fact, that a large part of the game revolves around letters and numbers. And once kids learn it, they suddenly represent just a means to test reflexes of players, which could not be enough.

Game certainly has great processing. Various components are used all very well for their purpose, entire box is covered with illustrations and all important elements are made of solid wood. 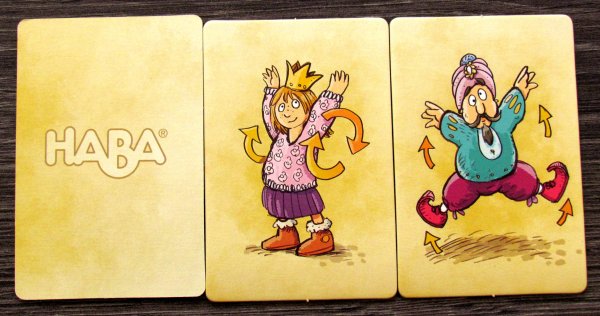 Burg Drachengold focuses on children, to whom it provides guaranteed entertainment. It has very simple rules, and because it can be handled even by six years old players. Burg Drachengold is completely accessible to everyone and can provide nice fun with only a few components.

- part of the game teaches kids letters and counting, it may seem simple later on

Burg Drachengold tells story of a foolish knights on their quest, when all end in hungry mouth of green dragon. It offers a heap of fun for children from six years old to adulthood. Simple basis of player skills is supplemented by reflexes, which are the only way to guarantee points. Once players need their vocal cords, other times quick reflexes or catching of dragon figurine. As players improve, it is possible to add new rules, but never at the expense of speed and dynamics of the game. They simply make more mistakes and consequentially are better entertained. Burg Drachengold is hilarious children´s game.