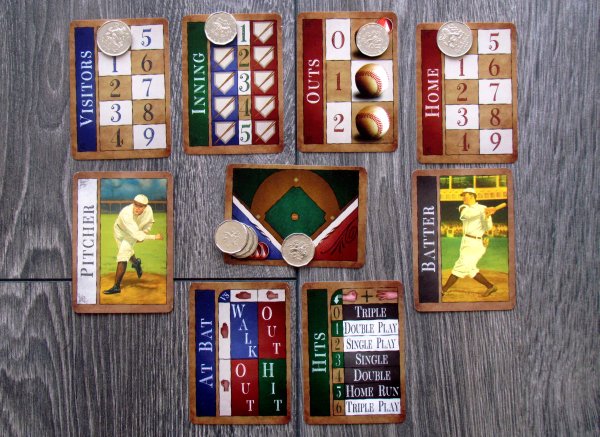 He made one home run and became famous. One glance, one sweep and a breath so deep, that he almost blew the whole stadium. Thus began his journey of happiness and glory. Now, he knows, he needs to be at the right time at the right place and everything is possible.

It is even possible, that you will play your fist baseball with use of only eleven cards. Famous author Rob Bartel presents to us one of his series of Famous games, called Famous Fastballs and published under flag of his company Famous Games Company Inc. We are holding third edition.

This is small pakcaging, into which just eleven cards fits, together with one card with information about baseball as such. In contrast, two of the eleven cards are double-sided, describing the rules. As a result, we are left with nine cards for the game itself. Two of them are used for scoring, each in color of one of the teams (home, guests). Next up is again a numbered card, that will monitor amount of plays for both teams. 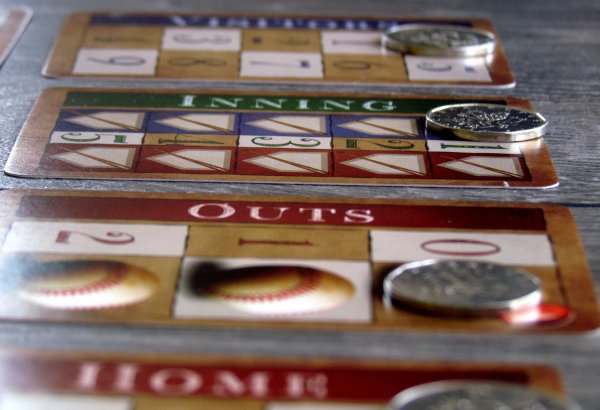 Next two cards show only player roles – one is made for pitcher, while the second one will be at bat at that time. Other cards represent field, each showing one base, meaning more cars are connected to each other. Last two cards are wearing possible outcomes of individual shots as a crosstable.

At the beginning of the game, players will in addition to those cards need also eight coins, which are spread over all scales. Each scoring one, then another on outs and rounds. Remaining four will line up on the field, where they will go to bat gradually and if successful, continue to run around through all bases.

Players will alternate in roles, while guests start with pitching. Just like in real baseball, also here players have to be very good in bluffing. And both of them. That is, why outcome of the throw will depend, if anyone of them merely indicates the movement. Both players then secretly chooses hand symbol, which is then simultaneously revealed. Based on one selected, is results to one of four possible options. Two of them (if players agree) means, pitcher is out. 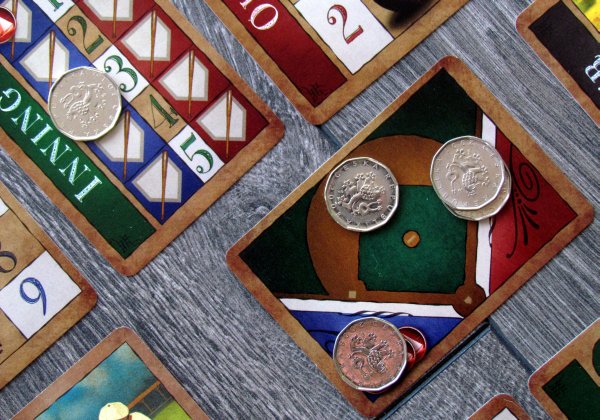 Otherwise, pitcher may go to second base (if both decided to do nothing = open hand). Two fists conversely mean he hit ball flying and made a homerun. At this point, turn evaluation shifts to second card, which is dedicated purely to hits. Outcome now depends on how much fingers both players raise (again secretly) up to a maximum of three. While the batter tries for greater numbers, pitcher wants lower ones.

Success means, that he can move his runners one or more bases. Conversely ball, which fell into the hands of the defending team, will sign underneath chances to exclude one (or more) runners and declare them as out. Both outs (no matter of their origin) must be marked on out card. Players will increase this, until they exceed number two.

Role of both opponents then exchanges. After that, game continues with alternating roles here and there, while for every batsman, who can bamboozle his back to the home base, the team scores a point. After playing the required number of nine rounds, player, who collected more points may celebrate. 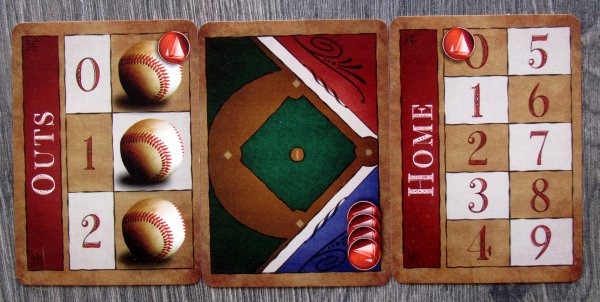 Famous Fastballs is a unique card game. At a time, when everyone is celebrating success of minigames (Love Letter), Famous series are at its peak. We were able to convince it with our earlier reviews of Famous 500 (review) or Famous Forehand (review).

This time again, we return to ball game, but we do not bash into it. Instead, players are throwing it with their own power. Baseball is religion in America. Here, its just one of the sports, that still sound exotic to us. That does not mean, that we could not play and have fun, just like with 1st & Goal (review).

Game once again incredibly faithfully and simply transmits feeling of a baseball match to the table. Again, it can be seen, that author has great ideas, imagination and can pull maximum from low card number. Each match has an interesting course, when opponents each are trying to guess, what other plays as their symbol. But even then, it is not yet won, because to bamboozle back to home plate in one round is possible only after home runs. 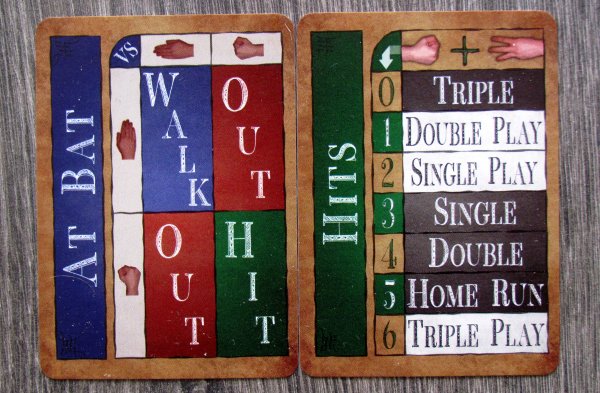 Of course, this is not fun for everyone. Mainly due to need to estimate your opponents, luck plays a major role in the outcome. Seemingly, this is only interplay of circumstances, but you can still succeed and reach home plate and points.

Simple rules are explained in few minutes. Then game itself does not last too long either, though, with nine game cards, you would not guess it for half of an hour. All the more surprising is the fact, that all the time, you will not get bored.

Famous Fastballs is excellent and beautifully simple game, that successfully transfers the baseball world into a few cards. And with their help, we too can become hero of the match. Famous Fastballs is simply great fun for everyone – hobbyist sports and baseball fans.

Famous Fastballs is a game, that uses few cards and few coins from your pocket. And only small amount of these components is needed to kick off exciting baseball fun. The game works amazingly well and successfully transfers bluffing atmosphere of sport to your table. Both opponents are constantly involved in the game, and its all fun, though the results of the pitches and ball hits is decided by luck. Specifically, sum of both opponents selection. While this may deter some potential buyers, it makes also Famous fastballs pleasantly playable miniature sports game.

by Dušan on 21. 02. 2020
Humans are incredible creatures. They are able to get into trouble and in the most incredible situations from which they have no chance to free themselves. [...]

by Dušan on 20. 01. 2020
They are all talking about the incident with a boggart all the time. But our practical lessons with professor Lupin were getting even much more interesting [...]

by Dušan on 25. 11. 2019
Whenever emotions are born within us, they immediately desire to bubble to the surface and show themselves to the world. Sometimes we fight it, sometimes [...]
Comments
Leave a reply