Review: Fleets The Pleiad Conflict – bring your squadron together 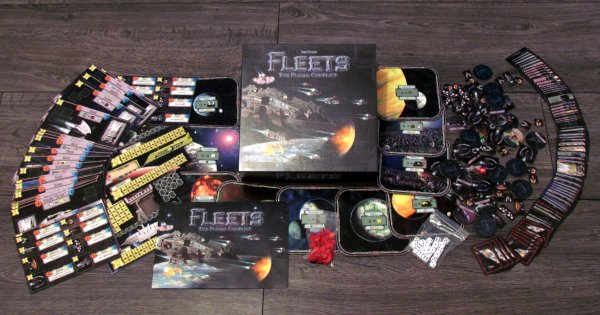 Humanity and its desire for war could never stop at border of our solar system. We are moving it out into neighboring constellation and we bring fire and death along. And why? As always, it is just and only desire for more power. The strongest exploiting the weak and sending them to the front lines. Even after 1,400 years from today, it will be like this.

We will be convinced about this as a fact easily by boardgame Fleets: The Pleiad Conflict, which was prepared as new game by family publishing house of brothers Fryxelius, FryxGames (Space Station, Wilderness). Author of this game is specifically Daniel Fryxelius, who also created graphics. The game was trying to gain support for small development on Kickstarter, but despite the failure, it arrived on the market in 2014 for player at fair in Essen to take away home with them.

Box leaves us in no doubt, that this game is thinking in large scales. Inside, we can find a really big pile of components. First, there are large squadron cards, which in addition to mother ship also offer place for escorts and properties of this fleet: strength, cost and scale of energy. There is quite a long line of escort ships, where eight kinds of forms offer a total of 74 different sized ships. 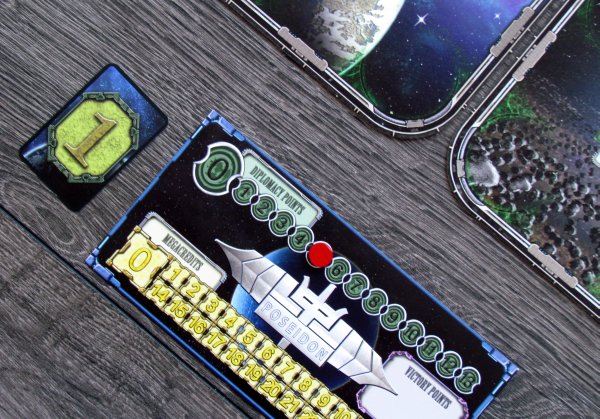 For players, there are also small boards with two scales (money and diplomacy) and a place to store victory points. Large boards are also means to create map at the beginning of the game, showing the diplomatic level of planet and reward for its control. Universe will be also sailed by the cards, whether it is an enhancement to the mother ship or action cards (offering diplomacy or attack) and four order cards. There is also a big help cards and twenty battle dice.

Everything begins by players drawing the entire system, in which game will take place. Board is created from planets in amount one more, than there is players in the match. Above them, players set market of randomly rotated three fleets and same number of improvements. Rest of these big and small cards create drawing piles, as well as action cards, which are all shuffled into one deck. Each player will have his board, which marks his starting capital of 26 megacredits and five diplomacy points. He is dealt one action card.

At the beginning of each round, players first need to determine a random order. Simply each player chooses one card from offer and it will determine, how far will his turn come up in actual round. Then all can start buying, but gradually as per the specified order. At the market, players can buy a fleet and its enhancements. Once a player takes a new mothership, he places his counter on a red mark indicating the position of four energy points. Players take turns shopping until their finance run out. 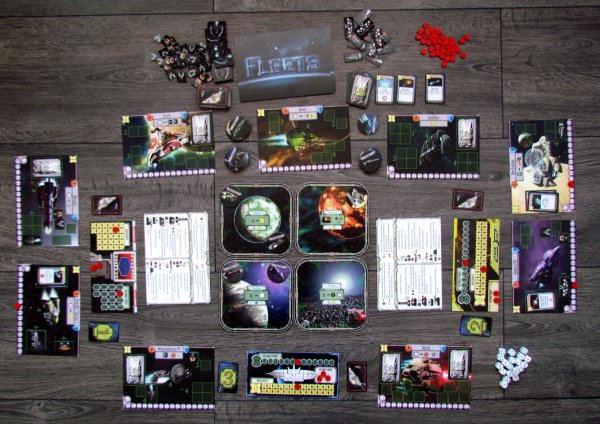 After collective visiting to the market, players are still not allowed to send their ships into the void, because now its time to buy accompanying ships. They no longer have their own offer, but their selection is dependent only on the generals themselves, as menu is opened for all types. Price is determined by table on help card and vessels must be distributed around mother ship into prepared boxes of a fixed size, so the new owners will have to combine them well.

Finally, this is the time, when players can with their newly created army try to get certain sectors under their control. Each round has a fresh start, so players always take all tokens representing their fleet and gradually send them into sectors, trying to persuade population in their favor. Fleet tokens are always placed on the sector to side pointing towards that player, making it easier to tell them apart. At the end of the round, these ships return to their owners to be re-deployed again in the next round, either elsewhere or in the same location.

Surely, it can easily happen, that more than one nation meets in one location. In such a moment is (of course after all ships are placed) first a chance for diplomacy. Players can then choose diplomacy card from their hand, use action of the solar system or pay diplomacy points and all that for taking back their units (or making others do so). 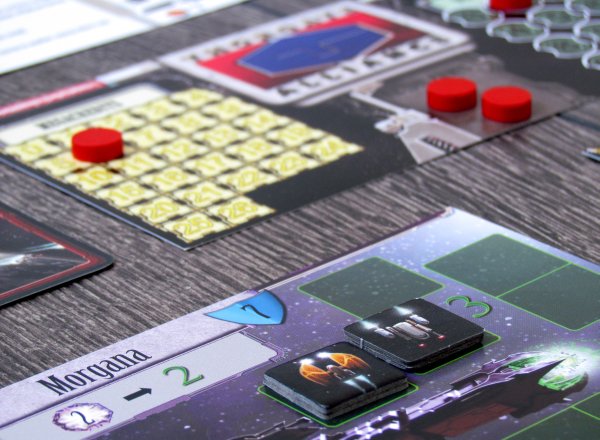 And then finally, cannons can start spouting torpedoes and lasers make gun barrels glow. Player must always choose target of their attack. Battles then take place in four phases. Ships are split into them depending on their actual initiative, that is printed not only on the mother ship, but also for each accompanying group of ships separately. Within one of these phases, generals have the option from first player to gradually attack with all their ships and support their power by some action cards (which can be played, even if player does not have ships of initiative currently being evaluated).

Assault force of each ship corresponds to number of dice, that player gets. Hit can be marked for every roll showing at least four pips. Damage should immediately be noted using red tokens. Destroyed ships are immediately removed from the game. Once this happens to mother ship, its entire squadron is disbanded. Fortunately, undamaged ships can find their way back and players will be able to assign them to a different groups, but in the context of the next round.

Then you have to just go through one system after another and find out, who has it under control. If player has no rivals in an area, he gets one victory point for it. Even before squadrons return after their successful fight, they retrieve reward specific for their controlled territory. In addition to this, players will receive their regular income and can enter into the next round. Anytime, when someone manages to accumulate seven victory point, he becomes the winner. 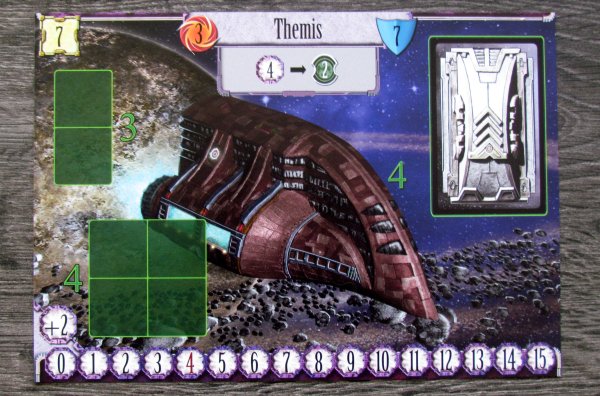 Fleets: The Pleiad Conflict acts as a simple struggle for supremacy and it really goes down to the core of its game structure. It looks very simple and its not only an impression. Game offers no complex mechanisms, everything is clear at first glance. Only element, that can seem more complex, are different attack strengths of ships and number of lives fleet can have and you will need help card for overview.

Main nutrient for all the players, who will take part in battle for planetary system, is building a fleet and their subsequent usage in combat. Players have a wide selection from the menu accompanying vessels, but are also a limited by selection of mothership. There is enough of those and their random offer, as well as a selection of planets, guarantees variability between individual matches.

Furthermore, the sheer conflict between players takes place always a little differently. Its because of the dice, but also fact, that next time you will not make same mistake. Game is not just about planning, but also estimating opponents, since sending squadrons to systems is happening gradually. Ships with higher initiative have advantage of time, they had everything clear, in moment of their arrival. 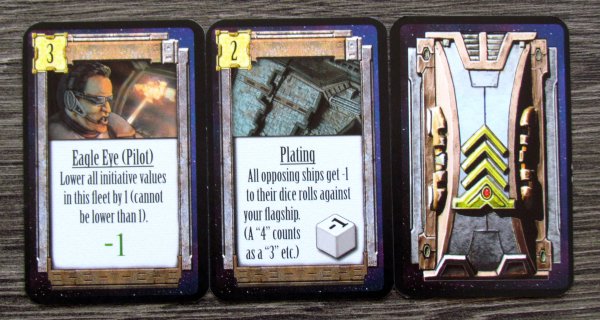 Big surprise for us was, that game is also excellent as two player! It is quite different, because only two armies meet near planets and less intense conflicts await them. And then, when you try to play it with maximum number, you will find its  great again. This game just works well and it can be seen, that author approached balancing very carefully.

Luck plays a significant role in this game. Although outcome of the struggle is up to dice and sometimes you can get surprising results, mostly everything seems to be purely tactical. Players can build on their previous decisions. From beginning to end, every step should be important choice. And then you are crossed out by random player order, which is in every round. To some it may be a drawback, but it adds another huge portion of tension to the game.

We see exaggerated length of the game as the biggest problem, if you choose recommended seven victory points as your goal. Combat may in that case easily exceed two and half hours and that’s a great deal of time for such a simple game (we are talking about game of four players). Fortunately, that claim can be easily corrected by reducing threshold to five points. At that moment, you get ninety minutes requirement and then game does not lose pace even towards the end. 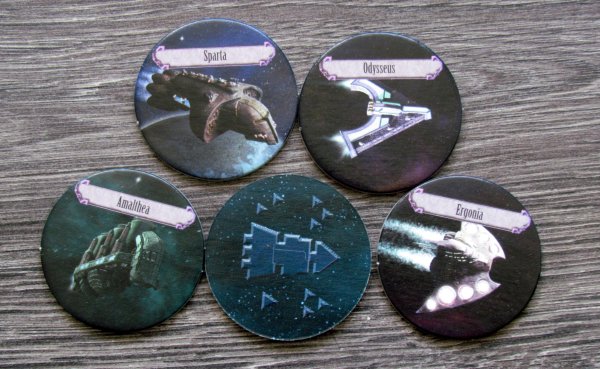 Game is really hungry for space, components are solid and guarantee, that players can feel the atmosphere since beginning as they are part of space battles. Everything works in favor of the experience, which is really at a high level. The game, however, takes too much space on your table because of this.

Fleets: The Pleiad Conflict is for us one of winners of the exhibition Essen 2014. Discreet game, that a lot of people missed, is walking in footsteps of outstanding Wilderness. This time, brothers Fryxelius have placed everything on direct conflict and rivalry between players. Map is small, possibilities are many and it all leads to one outcome – players must go for the jugular. Fleets: The Pleiad Conflict is a game full of experiences, in which you would not mind it being a bit longer and more random.

- longer, when playing to seven points

Fleets: The Pleiad Conflict is an excellent game, where stands up on the edge of one of solar system and allow us to fight for supremacy of another. Each planet is waiting for persuasion by visitors, so each round is a whole new battle. Players are for this purpose building large fleets and for each you must buy mothership from the menu. Turn order and fights are random, but that only adds to the tension and atmosphere. Length of the game in more people may easily exceed two hours, which is too much. Fortunately it can be altered. But even then, a great experience is waiting, that is worth it. Fleets: The Pleiad Conflict is a great game for all space conquerors.