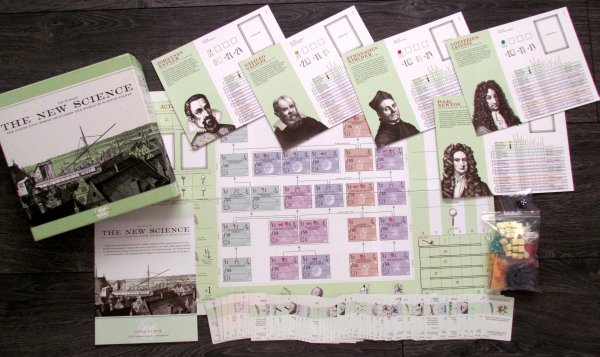 None of the inventions, I´ve ever shown the world, have been successful. Conversely, all were laughing at me because of them. I can only look enviously across the street, where Galileo plays with his toys. He created one sentence and is famous. We others have to fight hard to beat him. But I am decided to overcome his success. I know I am able to do this, and I have to show it today. In the afternoon, royal messenger arrives here and will select one of us. ONE! And he becomes king of whole scientific company.

All of us dreamed as children, that we may invent something someday. And now, you can experience, what it feels like thanks to Dirk Knemeyer and his board game The New Science. It was published by company Conquistador Games and you can find the box in the outside world since year 2013. Renaissance period illustrations for the entire contents were prepared by Heiko Günther.

The box looks a little inconspicuous in its white and green colors, but inside are hidden the best minds of the time and at that moment, when you open the box, they certainly are building some new stunning creation. In the first place, you will come across a game board, which is dominated by scientific tree. It connects individual inventions using thin lines showing their dependence. Yes, blood circulation can not be found without a microscope. 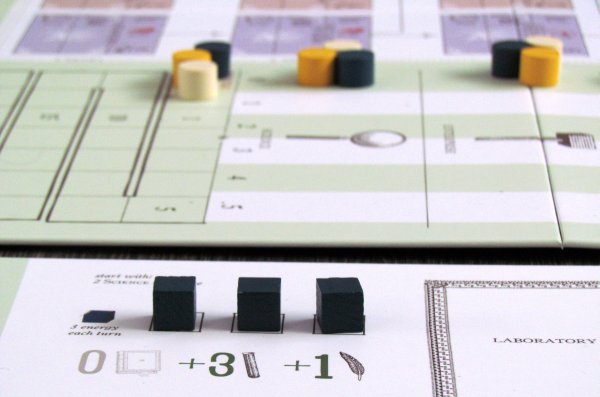 Below them are already pundits themselves. There is five of those in the game, each with his own scientific board, where he will invent. There is not only prescribed color of players pieces described there (cubes and tokens representing energy, discoveries and serving to mark positions on different scales), but also three positions for energy, laboratory space for an active card and especially an overview of all the inventions, their costs and reward.

At the beginning of the game, everyone can choose his own scientist. He gets with him also tokens and diced energy. Everything in the player´s color, which is printed on the board. Game board must be placed in the middle of the table between all rivals and players deploy their round tokens on different scales. Depending on the number of rivals, a deck of happening cards is set up in the designated numbers from each level.

Each round, players first alternate and use their energy (three cubes of their color) for activities, that are offered on a common board. These positions are printed on the left side in several rows and columns, and will evaluate progressively from top to bottom. Each box has a position for only one cube, but actions usually have more than one positions. Only when everyone puts all his energy into some activities, its time for evaluation of these efforts. 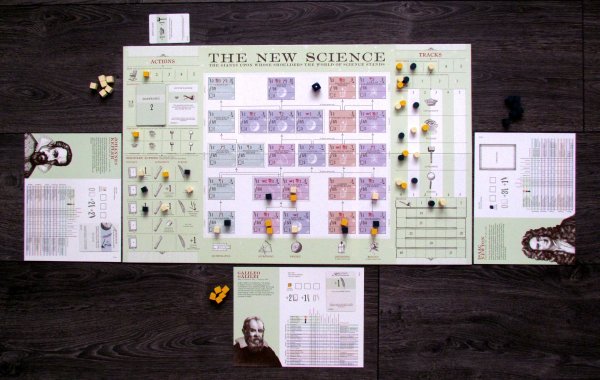 Players can invent in this way and especially publish their successes to the public, which finally earns them victory points. The more inventions, the better position in relation to the victory. Actions start with players chance to invent one of the subjects for proper number of research points. But they still have to adhere to tree of knowledge, so all start climbing together from the bottom up. Once an inventor manages to do all his thinking stuff, he may put one of his research cubes marking this position on a board into the lower line, that indicates coming up with the idea.

But this is not nearly enough. Before he can issue a publication about his discovery, he must also be test it in practice. To do this, players will be using experiment action. Only this way can they really get to know object of their interest. Here, REST action becomes also very important (special action, that affects order of players), becase even clever brains needs to sleep from time to time. Position on the scale of rest adds points needed to succeed in experimenting. But even luck plays its role in the form of dice, because such experimenting often does not end too well. The result should be compared with the value at the very subject of investigation. For success, you can put a cube in the upper discovery row of the invention.

None of the players can invent or experiment on the discovery, on which someone has already published a book. This action (publishing) simultaneously is the main way for players to receive victory points. The action is limited to number of positions according to number of players. The player can publish a book only about the discovery, on which he successfully conducted an experiment. 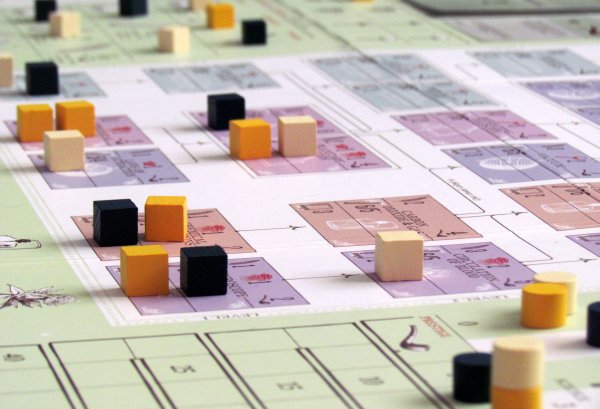 Most inventions beside basic requirements require also a certain level of relations with ruling class or even religious people. Many discoveries actually create friction, that these organizations do not like and it is up to the player to influence their meaning through climbing the appropriate political ladder. But there are other scales, for example representing education of you as scientists. Players may also select for their action one of the happening cards and gain them for themselves.

At the end of each round, players take their energy cubes back and exchange happening cards for new. This starts a new round. Opponents are trying to educate and explore new things in the world until, it the last of the top level inventions (fifth) is discovered. The game can also end up by drawing out whole happening pile. Players add victory points gained during fights and add additional bonuses for scientists with the highest number of publications. Player with the highest combined points is the winner.

The New Science is a game, that stands out above all other with its topic. Opportunity to become one of the famous inventors and go through a lot of different ideas from their inception to realization is not something you do every day. Everything is realized through simple and well-known worker-placement mechanic. 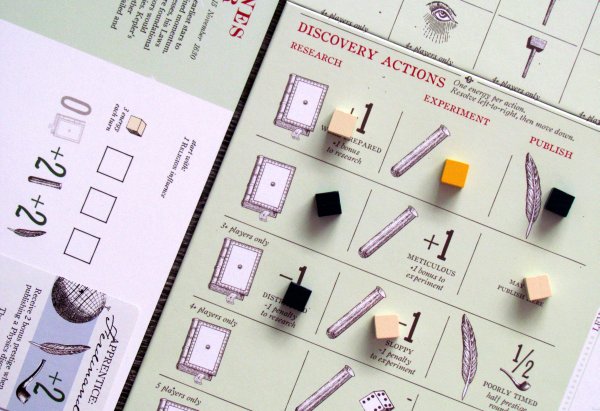 Game is based on the interdependence of scientific activities. Thus forcing players to pass from the initial idea, through its testing to actual publication. And is it really such a race against time, because the others are trying to do the same, even with same things. Only the first and fastest can publish book on the discovery and acquire victory points.

The real competition for individual inventions on the tree of ideas is the main strength of The New Science. You have to know, when to leave your study and focus on a better idea. In doing so, it is interesting, that the players actually by publication help others, who may automatically start studying an idea derived from their invention. Here is the key of technology tree, which is exquisitely wrought. Publishing gradually becomes very competitive and essential element of pressure.

In the spirit of the game, it is still only about playing cubes and paying requirements in resources. But at the same time, players must fulfill other requirements, that researcher needs to devote time to – whether it is relationship with the ruling nobility or dedicating to church. 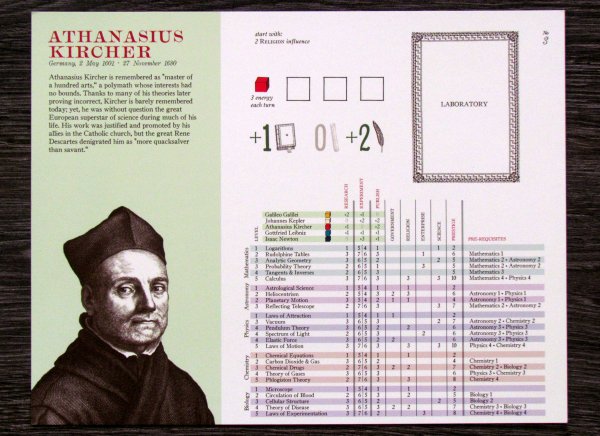 For a worker-placement game, this one takes a little longer to complete. Usually time for such games goes around an hour, but this time limit is exceeded. Inventing simply needs time. Fortunately, there is something to do all the time and players feel, they have really achieved something. And that is good. This all is supported by a unique way of evaluating actions, which goes along the lines in sequence research-experiments-publishing, so it offers a variety of options to respond to what others have done. But it also makes first decision very important. Especially first games are even longer and can even stretch to two hours. With more experience, you will be finishing around ninety minutes.

Some happening cards bring to the game really insidious and malicious activity. You can totally plot their efforts in the hunt for the title of best pundit. Someone will welcome this and others will not. And these cards can be easily removed from the game, even rules advise you to do it, if you have not sabotage nature.

The game makes players use work of others in their favor. You have to selfishly take, what is given and on the other hand, help others as little as possible. The game is interesting in all the number of opponents and even duel is still balanced. Length increases with more opponents, as well as extend the knowledge tree and number of happening cards in the game.

You can often experience setbacks and frustrations of work in the game. And it does not have to be only from luck in the form of dice (used in experiments, bringing another level of reality), but also rooting in rivalry, when something unexpected derails course of events (a card usually). Fortunately, this roll of the dice can be affected and is not purely in the hands of luck, as it might seem.

The game also excels in processing, which further supports the feeling, that you are real scientists on the way to work everyday. Everything is sufficiently large, clear and players have even the cost of all inventions printed on their boards, so they do not have to look in the middle all the time. Planning is so much easier like this.

The New Science is a unique game. Especially in how it handles its topic and indeed to the smallest detail transfers you the feeling of inventing. Its a dream come true for all players, who like science, because there is no other similar game on the market. Although the whole time you are competing, you will even have such a communal feeling, that together as scientists, you are moving humanity forwards. The New Science is an excellent game, filling a niche of many of us, but also space in the market and provides a great way to enjoy a free evening.

The New Science is a unique chance to get to the center of Renaissance and into the minds of scientists, who had discovered many exciting ideas. You will make progress with them on the technology tree. Every invention must go its own route from research, through experiments to final publishing of your work. From there, also others can benefit, so you need to choose well, which subject will you devote the necessary energy. The game is excellent in all number of players, although it takes a little longer. The biggest drawback for some of the players is luck in the form of dice, which in used to decide outcome of experiment. But all this is offset by the amazing theme. The New Science is true experience for all, who love science and tactical thinking games. But its still worker-placement at its heart.