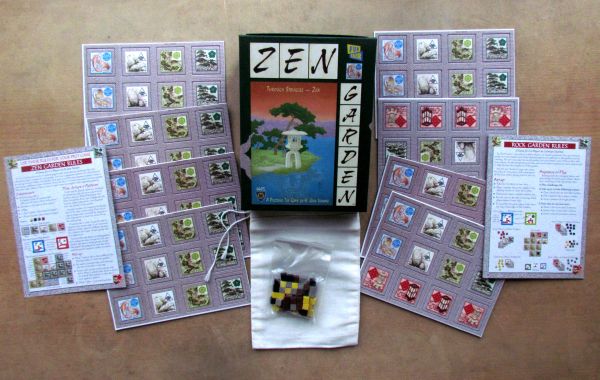 Every garden should be a source of peace and tranquility. It should be borne in mind of every builder, and creates base for every decision. It does not matter, if it’s a small green area at the family home or a large space adjacent to a castle. Its probably obvious to everyone, that in such a peaceful place, trees, rocks and waving grass must have its space. But source of all the peace and zen energy are lanterns.

Same opinion has also company Mayfair Games, which prepared for all garden lovers a new game called Zen Garden. There are actually two games (variants) located in the box and authors of each one is different. While the title (and easier) Zen Garden was created by Jean H. Vanaise, advanced Rock Garden is work of Coleman Charlton. Pictures and components are same, just as is one name behind illustrations – Jared Bland.

In a small dark green box, you’ll find a flood of cardboard pieces locked away in prison of punch-out sheets. You gather them together and find 96 necessary surfaces, to make your garden beautiful. And sixteen pieces of lanterns among them. They can be split by twenty pieces into elements of water, tree, grass and stone. Each of them has a front appearance appropriate to its environment and there is the most important thing on their back – pattern prescribed for this surface. According to the border of this tile, you can easily identify, what type it is, without need to turn it over. 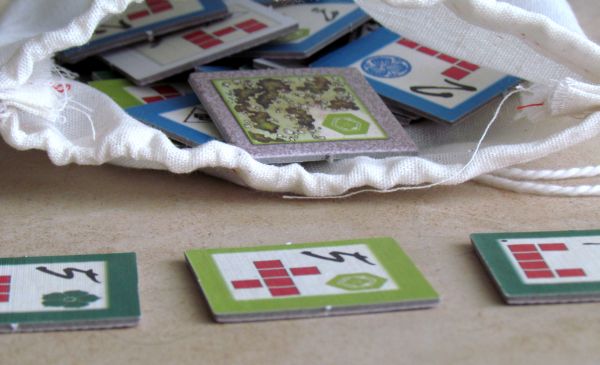 In addition to cardboard, box contains also a plastic bag with a pile of tokens, by dozen from each of the four players colors. This is a classic wooden cubes, that are all in similar shade of colors – yellow, black, gray and brown. Now remains to mention only a canvas sack and two rulebooks, one for each game.

This game can be used in just two basic ways, that vary in difficulty and demands on the players. For beginners, it is advisable to start with Zen Garden and later move on to the Rock Garden. It relies a little on knowledge of the simpler version of the game, which is .. its maybe not necessary to say.. really simple.

The review itself will be focused on advanced variant, while ideas about original Zen Garden will be kept hidden until the comments, where you’ll learn, what are the major differences. To start playing Rock Garden, players must first choose a color and take all cubes of this color into their posession. Each player picks up one token with a lantern for himself. One other must be placed in the center of the table, where will it serve as a starting point. All remaining pieces of the garden are shuffled and put in a canvas bag. From there, each participant draws four tiles as their starting supply. Three other creates a joint offer on the side. 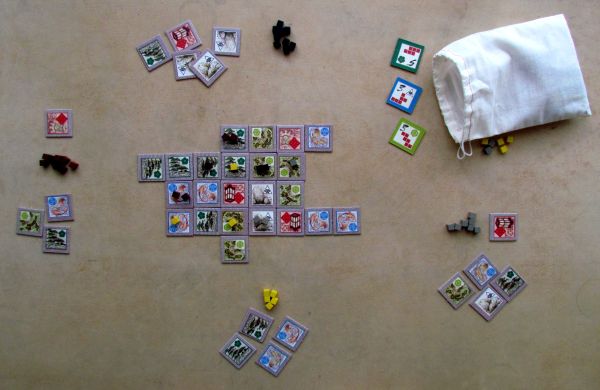 While your pieces should be kept up with surface image (pattern is much more important and you should hide it from others), when it comes to common offer, there applies exactly the opposite rule. Here are shown tiles for you to choose your new additions from, keeping in mind your plan in the first place.

At the beginning of his turn, a player plays out one piece from hand and adds it to the garden on the table. The actual location is not restricted, except that you must continue to build the garden and a new tile must be adjacent to at least one already played piece.

Before player can end up his turn by adding new tiles into his hand, he must first use up his two action points. He can spend it on trio of different activities, but they all lead to victory. He simply can place next tile from hand and attach it to any space on the table. Or he may replace lantern for one of his tiles, that fit correctly into place (must be same type as one of adjacent areas). Lantern serving as the joker must be immediately attached to other place in the garden. 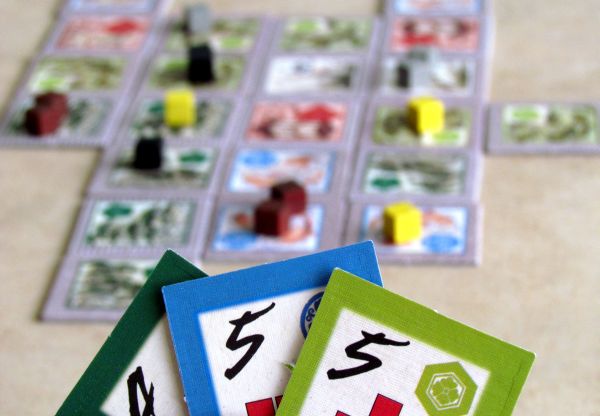 You can also prepare some of shapes created in the garden for scoring. You play tile on pattern, but you are not interested in its shape. This time, you are interested in group size, which must match number on your tile. But it is also possible to place a cube of your color on such area, which is the same color (= type of surface). In a large group, you can choose one empty spot, where you place your cube.

Only then you can use third option of the turn. You can only score such a pattern, that coincides with one pattern tile in your hand and also contains at least one of your cubes from past turns. You get points depending on how many lanterns were used to create it (less is better). But you do not get any reward to your possession, instead you get rid of some of your cubes, will are put in a point bank.

At the end of the round, players draws one to three tiles, according to how much actions did they take during this round (less = more action cards). Game ends, when one of players manages to get rid of all his cubes and at least six of them are already scored (= are in a point bank). This player is instantly declared winner of the game. One exception is situation, where you run out of tiles before this happens. In this case, player with the most points may rejoice. 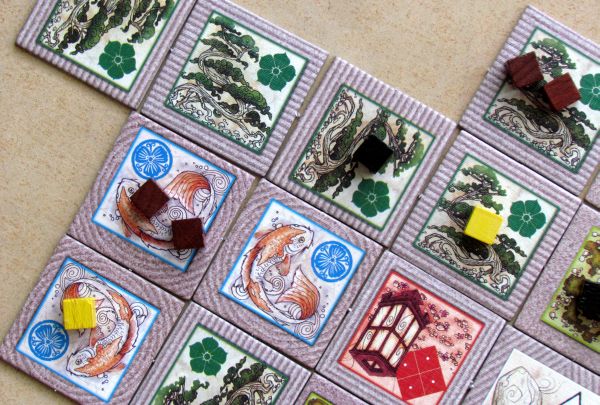 Zen Garden is in almost all aspects an average game. It shows concept used for many times – connecting one tile to another. And on top of that, it offers an atmosphere, that fits perfectly with its name – the game is peaceful, no excitement or tension can be found here. You just relax. But you might not enjoy it as much, as in a white Tokaido (review).

Instead of this regular building, there are secret assignments (randomly drawn) waiting for you to complete by building a garden on your table. Fortunately, your success depends not as much on luck, because each part can be used either as a secret pattern to score, but also simply as regular part of the garden. And because of this, game remains interesting despite its otherwise recycled nature.

And yet there may be unbalanced situations, because many patterns are very much alike. Then those players, who are trying to fulfill a similar pattern, have a better chance to succeed. While situation of remaining participants is more difficult. This can lead to very unsatisfactory feeling about outcome of the game. 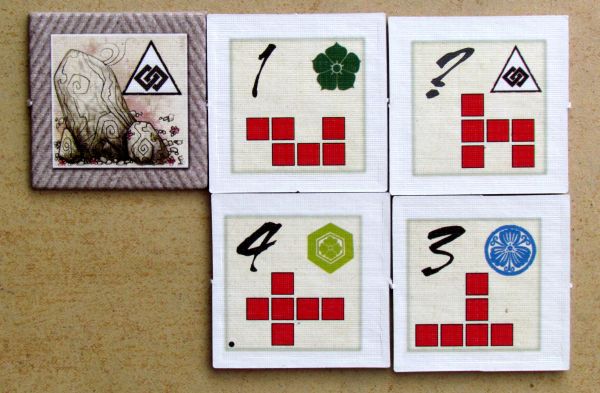 Related to this is indeed the game time, which is in main game around 45 minutes. It is therefore not a quickie, where you waved with hand over the outcome. In addition, because of atmosphere and tension, game feels even longer. Everything goes really slowly and calmly. Just as the name tells you. It is clear, that game is directed primarily at beginners, who also could be interested in such an easy game.

But variant Rock Garden still contains interesting ideas. Players can only score patterns after they have seized area for themselves. And they must, in their turn, pay one card for it. Only then they play a cube from his own reserves to onto garden. It is these wood chips, which play the most important role in the game, because your job is to get rid of them.

Simpler variant Zen Garden, which bears little bafflingly name of the game, gets rid of most decision making and removes the only things, which make the game stand out. It then remains are only a regular tile-connecting game. Game revolves around one tile, you draw and must hold onto till the end. It specifies your task. It cannot be exchanged or played as part of the garden. Three other pieces are in players hands, which he can distributed into the garden during their turn. The only positive aspect of this version is interesting scoring mechanic, which forces you to plan, create multiple identical patterns, preferably of the same type. But for beginners, even this simpler version can be fun. 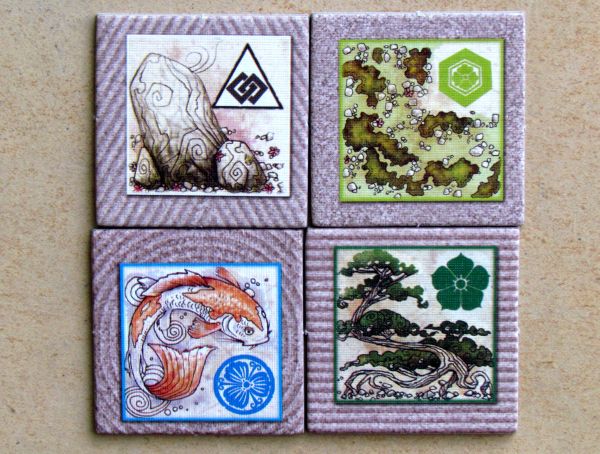 Board game Zen Garden did not disappoint us completely. It contains some interesting ideas, but the game is not filling enough its nearly hour long gameplay. There is stuff for experienced players, but it will above all entertain less demanding beginners. It is also very suitable for family play. A simpler version is quicker, but robs you of some important opportunities to influence victory. Altogether, we have a game, that is less likely become your favorite, but it will find its place on the bookshelves of fans of this style, mainly because of its really good price.

Zen Garden provides a relaxation through gaming. You are not rushing towards end in any of those two versions, but the game still takes long to complete, so you have enough time to reach peace and calmness. But for some people, there may be not enough action in these sixty minutes. You are competing with each other and trying to create areas of same colour to fulfil tasks on tiles, you are holding in your hand. This is the right way to get rid of your cubes and win. Secret tasks are nothing new, but to getr id of them to win is an interesting concept. Box contains also a simplified family version, but its perhaps too simple and too luck dependent to use it even as a learning variant. But even with the main Rock Garden version, it does not get perfect, because you can help unknowingly to your opponent. Patterns are a lot similar and more players may build on your creation. Based on these findings, its obvious, that Zen Garden is more or less average family fun.