Review: Heroes – those of a fearless heart 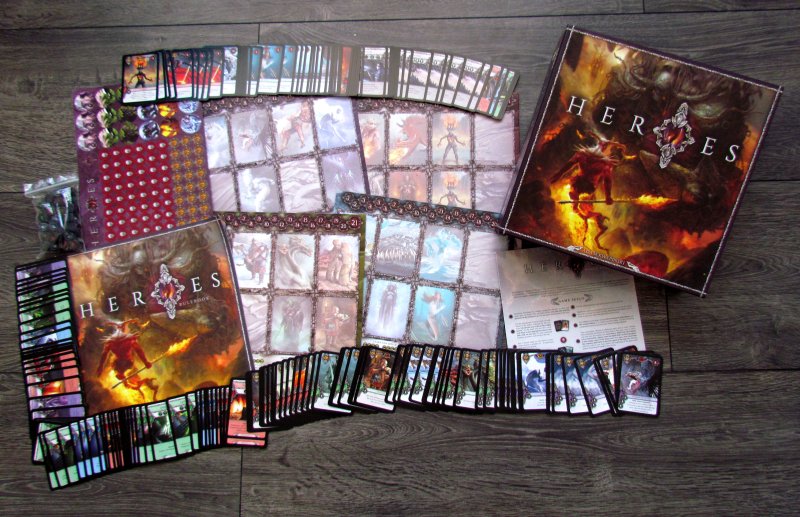 Heroes are the ones, to which world turns in case of an emergency. Now they are the ones, who must not flinch at any price in the face of threat. Perhaps their task may seem inhumane, crazy and unworkable, but that is just main reason, why many do it. They want to do impossible things and overcome challenges, that would make others back up. Do you have the heart of a hero?

Your answer does not matter so much, because you can try this feeling firsthand in board game Heroes. This is new game published by REBEL.pl (on behalf of small businesses Lion Games) and its author is Adam Kwapińsky. Resulting product is also work of illustrators Iga W. Grygiel, Poitr Foksowicz, Jaroslaw Nocoń and Grzegorz Bobrowski and was published in 2015.

Box takes form in a classic square shape and lid contains dark fiery illustration, that should test every heart heroes. But instead, it has not ability to lure players in, like we expected. The image is just not so pleasing and tempting as it could have been, given pictures inside. Fortunately we are heroes, who are not discouraged by one failure and remain excited to open the box. 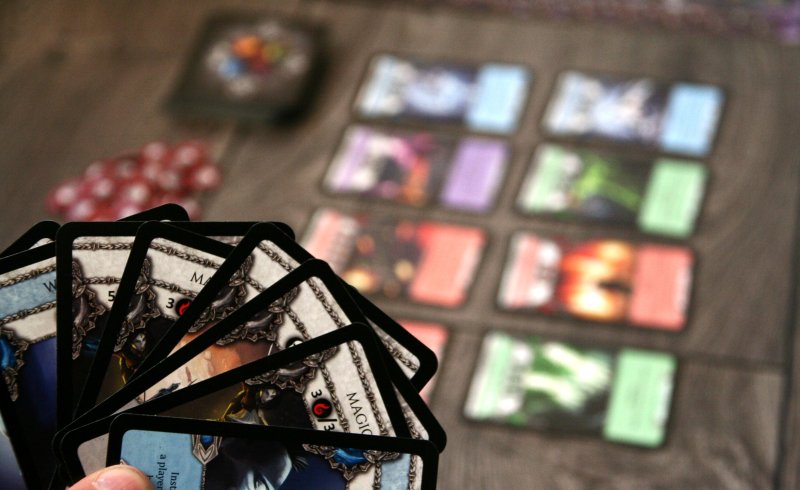 Inside awaits rulebook with about a dozen pages and four large game boards made of hard cardboard. Each one is comprised of eight slots (either prepainted for a quick start with given cards location or free to choose whichever unit you want), but also serves as a help sheet (actions are described at the bottom) and counter of injuries. Each army can withstand 21 hits, before backing up.

Its essence will be concealed by cardboard tokens of power and injury, as well as eighteen major tokjens for ongoing spells. But the rest of the content already accounts only for cards and twenty-five smaller colored dice with engraved characters. There is nearly two hundred cards in this game and they include basic and advanced spells. They have always given not only text description of skills, but also cost of its casting in different symbols.

This corresponds to further 92 pieces of monsters, where are cards revealing their weaknesses, but also ability to attack, number of lives and cost per activation for controlling player. They all will be in the service of generals, so there are four sets, each with 23 pieces. Every side of the conflict has its own unique battle minions. 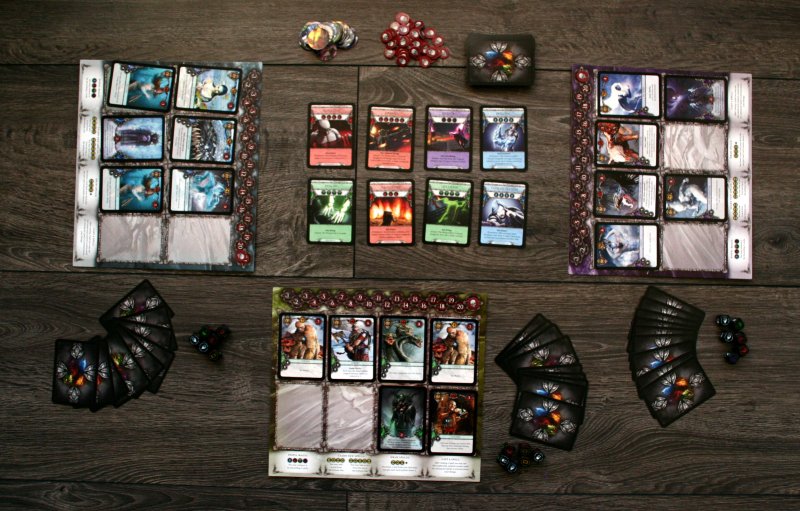 At the beginning of the game, players create offer of heroes, their respective monsters and special spells. But they also have to reveal cards from shuffled deck of advanced spells into two rows by four pieces. Both these offers can then players use and select cards from them in randomly designated order. In turn, you can choose either a hero (along with his special magic card and monster deck) or one spell from bottom row. Offer is immediately replenished from the top row and from the deck and starting procedure continues, until each player has a hero and three spells for him.

Players now get other equipment for their hero – specifically, five dice, set of five cards with basic spells, as well as a game board. This is place, where they have to immediately mark starting health on the highest number possible (21).

But even now, they can not start fighting each other. First, it is necessary to recruit an army for combat. All opponents have same number of recruitment points at their disposal, namely ten. Players can buy any number of troops from their deck for them and then deploy these units on the battlefield tactical board according to their wishes. 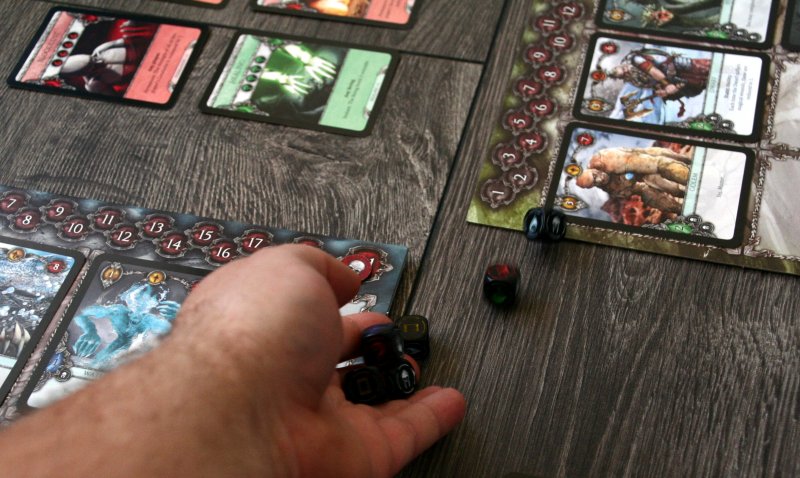 Now time finally starts running and players all take their five dice in hand. After some starting command (probably one of them shouting some battle phrase), they may all simultaneously start rolling the dice in attempts to get symbols needed for action they want to perform. Any number of dice can be rolled and re-rolled, while others with correct result can be set aside for later activation.

When participant is satisfied with his result, he yells “STOP” and all players must interrupt their efforts. His hero first takes damage from the dice as a result of his action. But only some symbols hurt each hero and make him lose health. Why would he do that? Because it can sometimes need them and injuries simply pays off. This is also time, when permanent spells are activated.

Afterwards, player can use his symbols freely. First of all, he can spend minimum of four card symbols for chance to learn new spells, therefore to draw a card from the joint offer in the middle. Top row is made available only when five card symbols are spent. But players are free to use the symbols of cards differently: to reveal random cards from the pile. This is made possible even, when only three symbols are used. Combining all four symbols can also invalidate permanent spells. 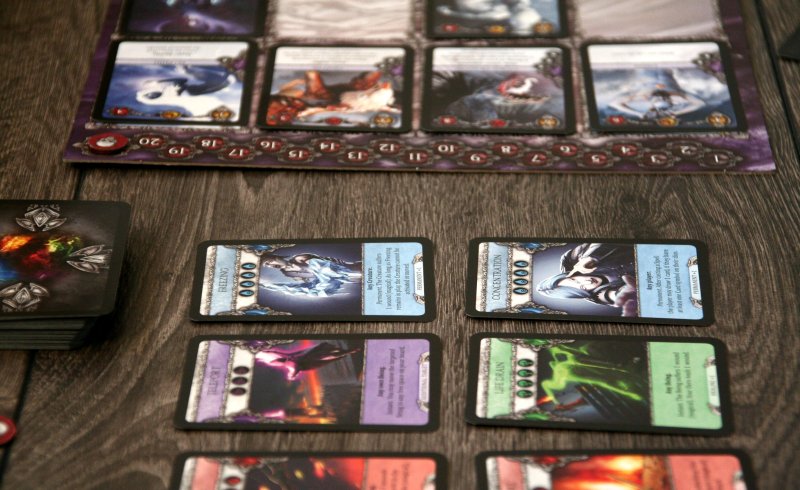 More important action is option to cast a spell. Player must meet requirements of card played from hand. Then he just selects destination of its effect, whether its effect is carried out immediately, or will it last (such a creature should be marked with appropriate token). Discarding two cards from hand can increase spell effect by a bonus printed at the bottom of the card.

Immediately thereafter, player can still activate or move monsters. Some of them may have attacked even earlier, if player used some command card. This is a second chance to take control of his troops. To activate creature without need to use the card, player needs symbols of leadership on his dice (not used until now). They can be divided arbitrarily between monsters. But each being has its own their requirements of order emphasis (higher number of dice required).

Attack may always only be directed respectively to arrows drawn on monster card, but always only towards creatures, that are not protected. All units have their injury indicated by placing appropriate number of injury tokens on its card. Hero scars are recorded separately on his scale up on the board.

After all actions are finished, players can continue rolling dice, where they left off. Only active player must roll all his dice again and begin collecting symbols from the beginning. Opponents gradually are eliminated from the game by dropping their hero health to zero, until only one remains. This player is the winner!

Heroes is a game of uncompromising battle and conflict. Players stand against each other and the only way to win is to destroy your opponent. Basic version of the game is designed for two opponents and as such it works really great. Both opponents exchange hits and game is full of twists, turns and tactics.

Tension then is clearly coming from every roll of the dice. Players should be able to decide in a split second about their current tactics. Sometimes it is difficult to achieve combination of symbols , then it pays to opt immediately for another action or be satisfied with less powerful one. Other times, success depends on the speed, because otherwise enemy manages to hedge and protect his troops against the attack.

Game excels in the field of entertainment, which roots in all enemies going simultaneously. Main distinguishing feature is, that each player makes his turns according to his tactics, luck and speed. And in between, all the others are simply waiting for him to finish his turn to be able to continue and get to their own action in a timely manner.

Now timing of actions is absolutely essential and cleverly goes against the very principle of the game simultaneity. Therefore Heroes are truly unique entertainment, but you will appreciate the game also thanks to its enormous variability. Each hero has a choice of their units from which it is possible to assemble a functional army. In first match, gamers can used prepared setup on one side of the boards, which will help them to facilitate their entry into the first game. The game is full of special skills and heroes cards, so everything is even less predictable.

Luck plays huge role in this game. But its cleverly balanced across the match and there is absolutely no chance in getting good rolls for the whole time. Yet there is a tendency for some important moments in the game to be easily decided by luck in favor of one opponent. With more players in the match, we appreciate, that authors thought about negative impact of player elimination. This game is played not until the last man standing, but for target number of successful hits instead. Equally interesting is the team version. 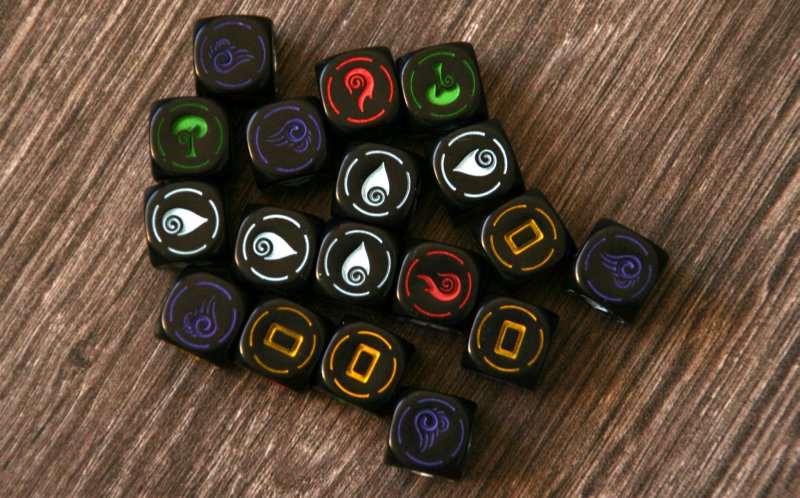 It is hard to avoid some comparison with Summoner Wars. Main difference is the fight, which are not drived by dice in Heroes, but by card properties instead. Dice have a completely different meaning here and move forward the entire plot. Each game is kind of tactical, but in a little different fashion. Heroes are more hectic and because of it, one game is matter of half an hour.

Game, however, not only excels in unique gaming mechanism, but also in graphics processing. Detailed drawings on the cards work well and create an atmosphere full of fantasy. Dice allow for high load and can withstand the constant usage. Rules are clear and detailed.

Heroes are ingeniously contrived entertainment, that takes place in intermittent flow of time. Players one by one move inch by inch closer to the target. But because their target is destroying the enemy, both mutually hurt each other and game is very exciting. Heroes is great fun, where you will be controlling monsters and hoping for the best rolls possible.

- chance determines, who will play when

Heroes is result of mixing a card game with dice, where everything is very fast and unpredictable. Turn always gets to the player, who can roll his coveted combination of symbols. A game, that is managed not only by luck, but also by greed of players. Their armies confront each other face to face, and every turn marks beginning or continuation of a duel. Scars on the battlefield are gained pretty fast and so is also the whole game. But match is different every time, thanks to an interesting compilation of spells and armies, each one unique and built before each battle. And although current roll of the dice will discourage some players, Heroes become deed, which plays very nicely.